Modern society has numerous applications of Faraday’s law of induction, as we will explore in this chapter and others. At this juncture, let us mention several that involve recording information using magnetic fields.

Some computer hard drives apply the principle of magnetic induction. Recorded data are made on a coated, spinning disk. Historically, reading these data was made to work on the principle of induction. However, most input information today is carried in digital rather than analog form—a series of 0s or 1s are written upon the spinning hard drive. Therefore, most hard drive readout devices do not work on the principle of induction, but use a technique known as giant magnetoresistance. Giant magnetoresistance is the effect of a large change of electrical resistance induced by an applied magnetic field to thin films of alternating ferromagnetic and nonmagnetic layers. This is one of the first large successes of nanotechnology.

Graphics tablets, or tablet computers where a specially designed pen is used to draw digital images, also applies induction principles. The tablets discussed here are labeled as passive tablets, since there are other designs that use either a battery-operated pen or optical signals to write with. The passive tablets are different than the touch tablets and phones many of us use regularly, but may still be found when signing your signature at a cash register. Underneath the screen, shown in (Figure), are tiny wires running across the length and width of the screen. The pen has a tiny magnetic field coming from the tip. As the tip brushes across the screen, a changing magnetic field is felt in the wires which translates into an induced emf that is converted into the line you just drew.

A tablet with a specially designed pen to write with is another application of magnetic induction. (credit: Jane Whitney) 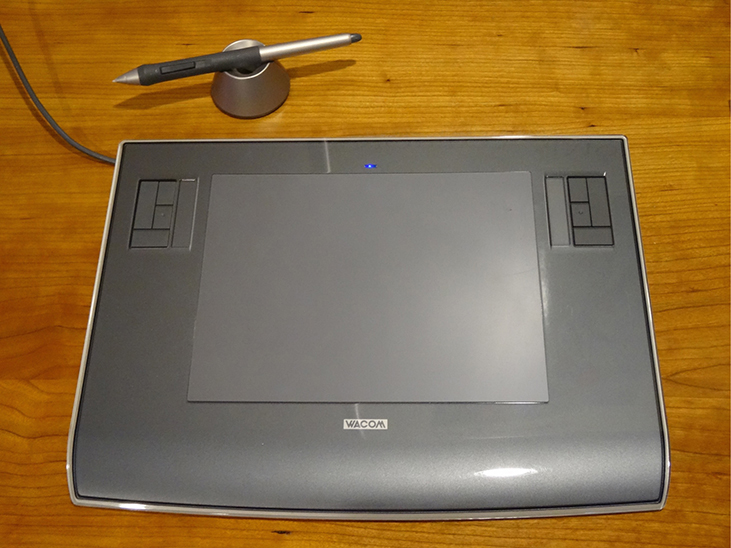 Another application of induction is the magnetic stripe on the back of your personal credit card as used at the grocery store or the ATM machine. This works on the same principle as the audio or video tape, in which a playback head reads personal information from your card.

Check out this video to see how flashlights can use magnetic induction. A magnet moves by your mechanical work through a wire. The induced current charges a capacitor that stores the charge that will light the lightbulb even while you are not doing this mechanical work.

Electric and hybrid vehicles also take advantage of electromagnetic induction. One limiting factor that inhibits widespread acceptance of 100% electric vehicles is that the lifetime of the battery is not as long as the time you get to drive on a full tank of gas. To increase the amount of charge in the battery during driving, the motor can act as a generator whenever the car is braking, taking advantage of the back emf produced. This extra emf can be newly acquired stored energy in the car’s battery, prolonging the life of the battery.

Another contemporary area of research in which electromagnetic induction is being successfully implemented is transcranial magnetic stimulation (TMS). A host of disorders, including depression and hallucinations, can be traced to irregular localized electrical activity in the brain. In transcranial magnetic stimulation, a rapidly varying and very localized magnetic field is placed close to certain sites identified in the brain. The usage of TMS as a diagnostic technique is well established.

Check out this Youtube video to see how rock-and-roll instruments like electric guitars use electromagnetic induction to get those strong beats.

Shown in the following figure is a long, straight wire and a single-turn rectangular loop, both of which lie in the plane of the page. The wire is parallel to the long sides of the loop and is 0.50 m away from the closer side. At an instant when the emf induced in the loop is 2.0 V, what is the time rate of change of the current in the wire?

A metal bar of mass 500 g slides outward at a constant speed of 1.5 cm/s over two parallel rails separated by a distance of 30 cm which are part of a U-shaped conductor. There is a uniform magnetic field of magnitude 2 T pointing out of the page over the entire area. The railings and metal bar have an equivalent resistance of

A current is induced in a circular loop of radius 1.5 cm between two poles of a horseshoe electromagnet when the current in the electromagnet is varied. The magnetic field in the area of the loop is perpendicular to the area and has a uniform magnitude. If the rate of change of magnetic field is 10 T/s, find the magnitude and direction of the induced current if resistance of the loop is

, the direction as follows for increasing magnetic field:

is oriented with its plane perpendicular to a 0.75-T magnetic field. If the coil is flipped over (rotated through

. The area A of the loop is changed by pulling on its sides while ensuring that the plane of the loop always remains perpendicular to the axis of the solenoid. If

what is the emf induced in the loop when

The conducting rod shown in the accompanying figure moves along parallel metal rails that are 25-cm apart. The system is in a uniform magnetic field of strength 0.75 T, which is directed into the page. The resistances of the rod and the rails are negligible, but the section PQ has a resistance of

. (a) What is the emf (including its sense) induced in the rod when it is moving to the right with a speed of 5.0 m/s? (b) What force is required to keep the rod moving at this speed? (c) What is the rate at which work is done by this force? (d) What is the power dissipated in the resistor? 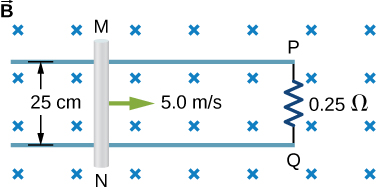 are constants. The solenoid is surrounded by a wire of resistance R that has two circular loops of radius b with

(see the following figure). Find the magnitude and direction of current induced in the outer loops at time

A 120-V, series-wound dc motor draws 0.50 A from its power source when operating at full speed, and it draws 2.0 A when it starts. The resistance of the armature coils is

. When connected to a 120-V source and running at normal speed, the motor draws 4.0 A. (a) How large is the back emf? (b) What current will the motor draw just after it is turned on? Can you suggest a way to avoid this large initial current?

A copper wire of length L is fashioned into a circular coil with N turns. When the magnetic field through the coil changes with time, for what value of N is the induced emf a maximum?

N is a maximum number of turns allowed.

A circular copper disk of radius 7.5 cm rotates at 2400 rpm around the axis through its center and perpendicular to its face. The disk is in a uniform magnetic field

of strength 1.2 T that is directed along the axis. What is the potential difference between the rim and the axis of the disk?

A short rod of length a moves with its velocity

parallel to an infinite wire carrying a current I (see below). If the end of the rod nearer the wire is a distance b from the wire, what is the emf induced in the rod? 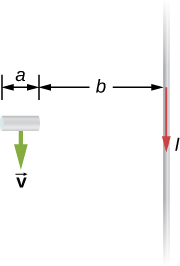 away from a long, straight wire carrying a current

(see below). Derive an equation that gives the current induced in the circuit as a function of the distance x between the near side of the circuit and the wire. 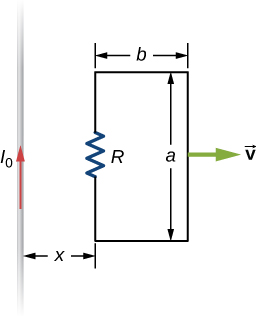 Two infinite solenoids cross the plane of the circuit as shown below. The radii of the solenoids are 0.10 and 0.20 m, respectively, and the current in each solenoid is changing such that

What are the currents in the resistors of the circuit?

An eight-turn coil is tightly wrapped around the outside of the long solenoid as shown below. The radius of the solenoid is 2.0 cm and it has 10 turns per centimeter. The current through the solenoid increases according to

What is the emf induced in the coil when (a) 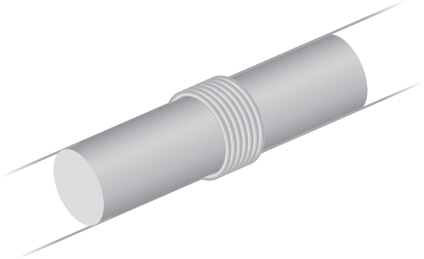 Shown below is a long rectangular loop of width w, length l, mass m, and resistance R. The loop starts from rest at the edge of a uniform magnetic field

and is pushed into the field by a constant force

Calculate the speed of the loop as a function of time.

A square bar of mass m and resistance R is sliding without friction down very long, parallel conducting rails of negligible resistance (see below). The two rails are a distance l apart and are connected to each other at the bottom of the incline by a zero-resistance wire. The rails are inclined at an angle

, and there is a uniform vertical magnetic field

throughout the region. (a) Show that the bar acquires a terminal velocity given by

(b) Calculate the work per unit time done by the force of gravity. (c) Compare this with the power dissipated in the Joule heating of the bar. (d) What would happen if 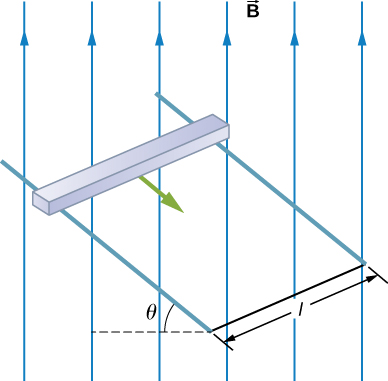 ; d. current would reverse direction but bar would still slide at the same speed

The accompanying figure shows a metal disk of inner radius

rotating at an angular velocity

while in a uniform magnetic field directed parallel to the rotational axis. The brush leads of a voltmeter are connected to the dark’s inner and outer surfaces as shown. What is the reading of the voltmeter? 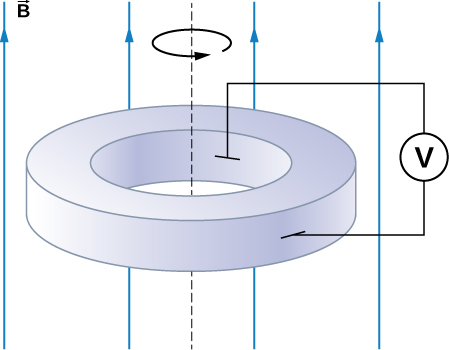 ;
e. no, because there is no cylindrical symmetry

The current in the long, straight wire shown in the accompanying figure is given by

What is the current induced in the rectangular loop at (a)

The resistance of the loop is 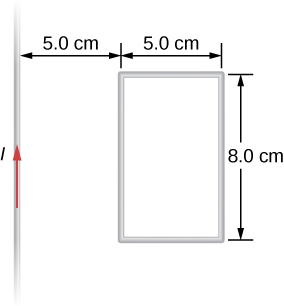 area is spun in Earth’s

magnetic field, producing a 12.0-kV maximum emf. (a) At what angular velocity must the coil be spun? (b) What is unreasonable about this result? (c) Which assumption or premise is responsible?

A long solenoid of radius

turns per unit length is carrying a time-dependent current

are constants. The solenoid is surrounded by a wire of resistance R that has two circular loops of radius b with

. Find the magnitude and direction of current induced in the outer loops at time

A rectangular copper loop of mass 100 g and resistance

, what is the time when it exits the region of magnetic field for the following values:

? Assume that the magnetic field of the induced current is negligible compared to 3 T. 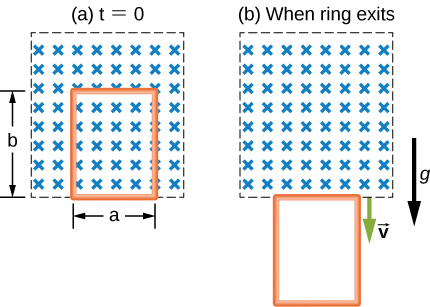 and direction perpendicular to the rails (see below). The two rails are connected at one end to a resistor whose resistance is much larger than the resistance of the rails and the bar. The bar is given an initial speed of

. It is found to slow down. How far does the bar go before coming to rest? Assume that the magnetic field of the induced current is negligible compared to

A time-dependent uniform magnetic field of magnitude B(t) is confined in a cylindrical region of radius R. A conducting rod of length 2D is placed in the region, as shown below. Show that the emf between the ends of the rod is given by 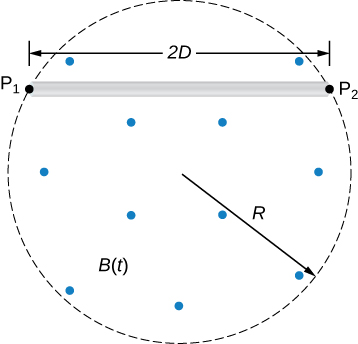