52 Capacitor with a Dielectric

. When the capacitor is fully charged, the battery is disconnected. A charge

then resides on the plates, and the potential difference between the plates is measured to be

. Now, suppose we insert a dielectric that totally fills the gap between the plates. If we monitor the voltage, we find that the voltmeter reading has dropped to a smaller value V. We write this new voltage value as a fraction of the original voltage

, with a positive number

in this equation is called the dielectric constant of the material between the plates, and its value is characteristic for the material. A detailed explanation for why the dielectric reduces the voltage is given in the next section. Different materials have different dielectric constants (a table of values for typical materials is provided in the next section). Once the battery becomes disconnected, there is no path for a charge to flow to the battery from the capacitor plates. Hence, the insertion of the dielectric has no effect on the charge on the plate, which remains at a value of

. Therefore, we find that the capacitance of the capacitor with a dielectric is

This equation tells us that the capacitance

when we insert a dielectric material to completely fill the space between its plates. Note that (Figure) can also be used for an empty capacitor by setting

. In other words, we can say that the dielectric constant of the vacuum is 1, which is a reference value.

(a) When fully charged, a vacuum capacitor has a voltage

(the charges remain on plate’s inner surfaces; the schematic indicates the sign of charge on each plate). (b) In step 1, the battery is disconnected. Then, in step 2, a dielectric (that is electrically neutral) is inserted into the charged capacitor. When the voltage across the capacitor is now measured, it is found that the voltage value has decreased to

. The schematic indicates the sign of the induced charge that is now present on the surfaces of the dielectric material between the plates. 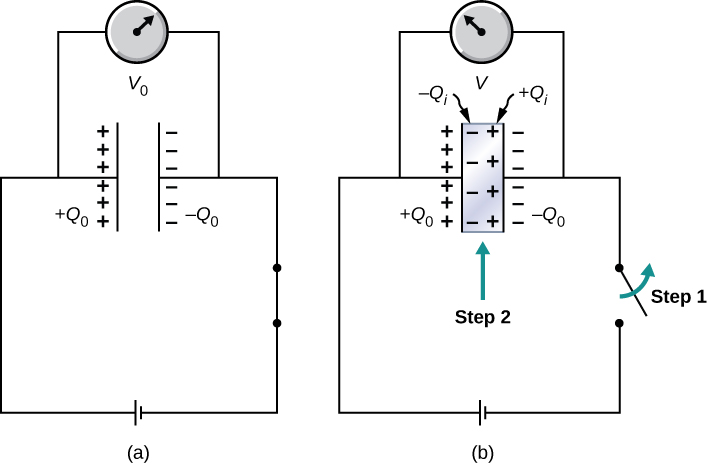 The principle expressed by (Figure) is widely used in the construction industry ((Figure)). Metal plates in an electronic stud finder act effectively as a capacitor. You place a stud finder with its flat side on the wall and move it continually in the horizontal direction. When the finder moves over a wooden stud, the capacitance of its plates changes, because wood has a different dielectric constant than a gypsum wall. This change triggers a signal in a circuit, and thus the stud is detected.

An electronic stud finder is used to detect wooden studs behind drywall. (credit top: modification of work by Jane Whitney) 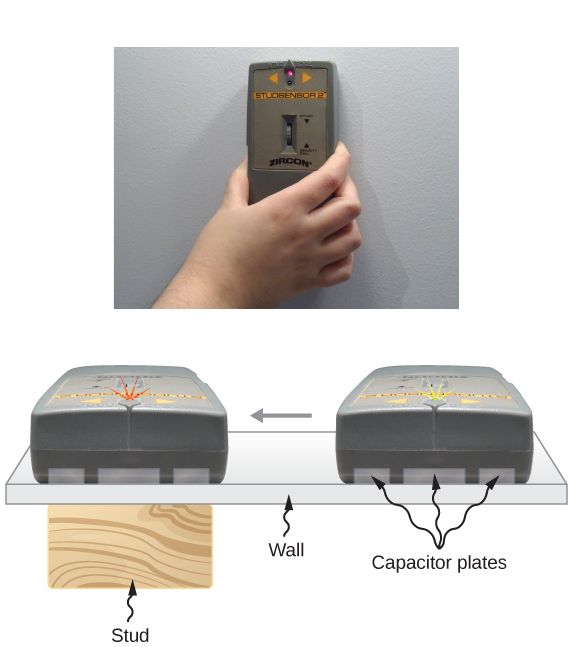 , the energy U stored in a capacitor with a dielectric is smaller by a factor of

Inserting a Dielectric into an Isolated Capacitor An empty 20.0-pF capacitor is charged to a potential difference of 40.0 V. The charging battery is then disconnected, and a piece of Teflon™ with a dielectric constant of 2.1 is inserted to completely fill the space between the capacitor plates (see (Figure)). What are the values of (a) the capacitance, (b) the charge of the plate, (c) the potential difference between the plates, and (d) the energy stored in the capacitor with and without dielectric?

Strategy We identify the original capacitance

and the original potential difference

between the plates. We combine (Figure) with other relations involving capacitance and substitute.

Significance Notice that the effect of a dielectric on the capacitance of a capacitor is a drastic increase of its capacitance. This effect is far more profound than a mere change in the geometry of a capacitor.

Check Your Understanding When a dielectric is inserted into an isolated and charged capacitor, the stored energy decreases to 33% of its original value. (a) What is the dielectric constant? (b) How does the capacitance change?

Discuss what would happen if a conducting slab rather than a dielectric were inserted into the gap between the capacitor plates.

Show that for a given dielectric material, the maximum energy a parallel-plate capacitor can store is directly proportional to the volume of dielectric.

An air-filled capacitor is made from two flat parallel plates 1.0 mm apart. The inside area of each plate is

. (a) What is the capacitance of this set of plates? (b) If the region between the plates is filled with a material whose dielectric constant is 6.0, what is the new capacitance?

A parallel-plate capacitor has charge of magnitude

on each plate and capacitance

when there is air between the plates. The plates are separated by 2.00 mm. With the charge on the plates kept constant, a dielectric with

Some cell walls in the human body have a layer of negative charge on the inside surface. Suppose that the surface charge densities are

, the cell wall is

thick, and the cell wall material has a dielectric constant of

. (a) Find the magnitude of the electric field in the wall between two charge layers. (b) Find the potential difference between the inside and the outside of the cell. Which is at higher potential? (c) A typical cell in the human body has volume

Estimate the total electrical field energy stored in the wall of a cell of this size when assuming that the cell is spherical. (Hint: Calculate the volume of the cell wall.)