Experiments with electric charges have shown that if two objects each have electric charge, then they exert an electric force on each other. The magnitude of the force is linearly proportional to the net charge on each object and inversely proportional to the square of the distance between them. (Interestingly, the force does not depend on the mass of the objects.) The direction of the force vector is along the imaginary line joining the two objects and is dictated by the signs of the charges involved.

We use absolute value signs around the product

separated by a distance r is given by Coulomb’s law. Note that Newton’s third law (every force exerted creates an equal and opposite force) applies as usual—the force on

It is important to note that the electric force is not constant; it is a function of the separation distance between the two charges. If either the test charge or the source charge (or both) move, then

changes, and therefore so does the force. An immediate consequence of this is that direct application of Newton’s laws with this force can be mathematically difficult, depending on the specific problem at hand. It can (usually) be done, but we almost always look for easier methods of calculating whatever physical quantity we are interested in. (Conservation of energy is the most common choice.)

in Coulomb’s law is called the permittivity of free space, or (better) the permittivity of vacuum. It has a very important physical meaning that we will discuss in a later chapter; for now, it is simply an empirical proportionality constant. Its numerical value (to three significant figures) turns out to be

These units are required to give the force in Coulomb’s law the correct units of newtons. Note that in Coulomb’s law, the permittivity of vacuum is only part of the proportionality constant. For convenience, we often define a Coulomb’s constant:

The Force on the Electron in Hydrogen A hydrogen atom consists of a single proton and a single electron. The proton has a charge of

and the electron has

. In the “ground state” of the atom, the electron orbits the proton at most probable distance of

((Figure)). Calculate the electric force on the electron due to the proton.

A schematic depiction of a hydrogen atom, showing the force on the electron. This depiction is only to enable us to calculate the force; the hydrogen atom does not really look like this. Recall (Figure). 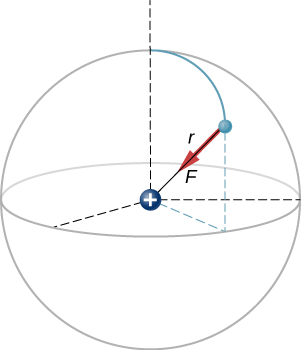 Strategy For the purposes of this example, we are treating the electron and proton as two point particles, each with an electric charge, and we are told the distance between them; we are asked to calculate the force on the electron. We thus use Coulomb’s law.

Solution Our two charges and the distance between them are,

The magnitude of the force on the electron is

As for the direction, since the charges on the two particles are opposite, the force is attractive; the force on the electron points radially directly toward the proton, everywhere in the electron’s orbit. The force is thus expressed as

Significance This is a three-dimensional system, so the electron (and therefore the force on it) can be anywhere in an imaginary spherical shell around the proton. In this “classical” model of the hydrogen atom, the electrostatic force on the electron points in the inward centripetal direction, thus maintaining the electron’s orbit. But note that the quantum mechanical model of hydrogen (discussed in Quantum Mechanics) is utterly different.

Check Your Understanding What would be different if the electron also had a positive charge?

The force would point outward.

The analysis that we have done for two particles can be extended to an arbitrary number of particles; we simply repeat the analysis, two charges at a time. Specifically, we ask the question: Given N charges (which we refer to as source charge), what is the net electric force that they exert on some other point charge (which we call the test charge)? Note that we use these terms because we can think of the test charge being used to test the strength of the force provided by the source charges.

Like all forces that we have seen up to now, the net electric force on our test charge is simply the vector sum of each individual electric force exerted on it by each of the individual test charges. Thus, we can calculate the net force on the test charge Q by calculating the force on it from each source charge, taken one at a time, and then adding all those forces together (as vectors). This ability to simply add up individual forces in this way is referred to as the principle of superposition, and is one of the more important features of the electric force. In mathematical form, this becomes

In this expression, Q represents the charge of the particle that is experiencing the electric force

, and is located at

from the origin; the

are the N source charges, and the vectors

are the displacements from the position of the ith charge to the position of Q. Each of the N unit vectors points directly from its associated source charge toward the test charge. All of this is depicted in (Figure). Please note that there is no physical difference between Q and

; the difference in labels is merely to allow clear discussion, with Q being the charge we are determining the force on.

The eight source charges each apply a force on the single test charge Q. Each force can be calculated independently of the other seven forces. This is the essence of the superposition principle. 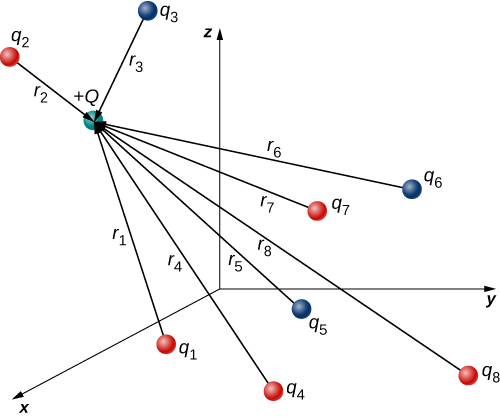 (Note that the force vector

; it may point in the opposite direction,

. The signs of the source charge and test charge determine the direction of the force on the test charge.)

The Net Force from Two Source Charges Three different, small charged objects are placed as shown in (Figure). The charges

are fixed in place;

is free to move. Given

, what is the net force on the middle charge

each apply a force on 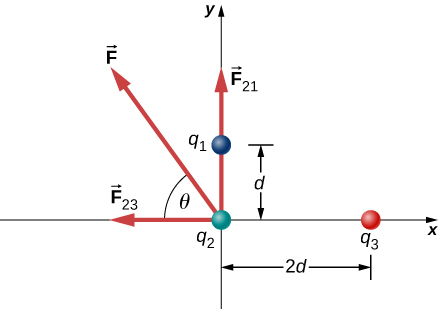 Strategy We use Coulomb’s law again. The way the question is phrased indicates that

is our test charge, so that

are source charges. The principle of superposition says that the force on

from each and add them together as vectors.

Solution We have two source charges

and we are asked to find a force. This calls for Coulomb’s law and superposition of forces. There are two forces:

We can’t add these forces directly because they don’t point in the same direction:

points only in the −x-direction, while

points only in the +y-direction. The net force is obtained from applying the Pythagorean theorem to its x– and y-components:

at an angle of

above the −x-axis, as shown in the diagram.

Significance Notice that when we substituted the numerical values of the charges, we did not include the negative sign of either

It’s also worth noting that the only new concept in this example is how to calculate the electric forces; everything else (getting the net force from its components, breaking the forces into their components, finding the direction of the net force) is the same as force problems you have done earlier.

Check Your Understanding What would be different if

The net force would point

Would defining the charge on an electron to be positive have any effect on Coulomb’s law?

An atomic nucleus contains positively charged protons and uncharged neutrons. Since nuclei do stay together, what must we conclude about the forces between these nuclear particles?

The force holding the nucleus together must be greater than the electrostatic repulsive force on the protons.

Is the force between two fixed charges influenced by the presence of other charges?

are held in place by 3-N forces on each charge in appropriate directions. (a) Draw a free-body diagram for each particle. (b) Find the distance between the charges.

are fixed 1 m apart, with the second one to the right. Find the magnitude and direction of the net force on a −2-nC charge when placed at the following locations: (a) halfway between the two (b) half a meter to the left of the

charge (c) half a meter above the 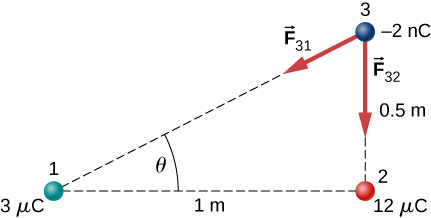 In a salt crystal, the distance between adjacent sodium and chloride ions is

What is the force of attraction between the two singly charged ions?

Protons in an atomic nucleus are typically

apart. What is the electric force of repulsion between nuclear protons?

Suppose Earth and the Moon each carried a net negative charge −Q. Approximate both bodies as point masses and point charges.

(a) What value of Q is required to balance the gravitational attraction between Earth and the Moon?

(b) Does the distance between Earth and the Moon affect your answer? Explain.

(c) How many electrons would be needed to produce this charge?

are placed 1.0 m apart. What is the force on a third charge

of the preceding problem be placed so that the net force on it is zero?

Two small balls, each of mass 5.0 g, are attached to silk threads 50 cm long, which are in turn tied to the same point on the ceiling, as shown below. When the balls are given the same charge Q, the threads hang at

to the vertical, as shown below. What is the magnitude of Q? What are the signs of the two charges? 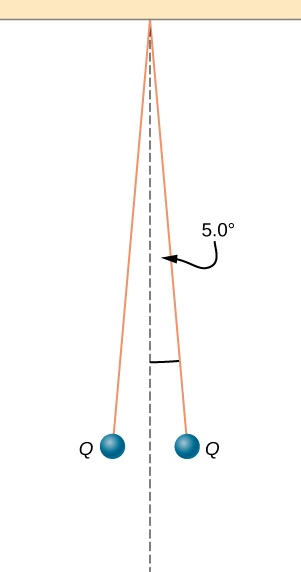 . The horizontal component of the tension is

.
The charges can be positive or negative, but both have to be the same sign.

. What is the force of

Let the charge on one of the spheres be nQ, where n is a fraction between 0 and 1. In the numerator of Coulomb’s law, the term involving the charges is

This is equal to

. Finding the maximum of this term gives

is placed at the point P shown below. What is the force on q?

What is the net electric force on the charge located at the lower right-hand corner of the triangle shown here? 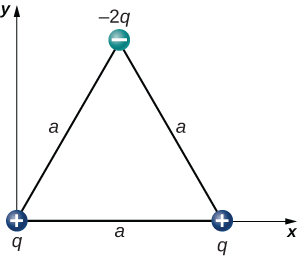 Two fixed particles, each of charge

are 24 cm apart. What force do they exert on a third particle of charge

The particles form triangle of sides 13, 13, and 24 cm. The x-components cancel, whereas there is a contribution to the y-component from both charges 24 cm apart. The y-axis passing through the third charge bisects the 24-cm line, creating two right triangles of sides 5, 12, and 13 cm.

in the negative y-direction since the force is attractive. The net force from both charges is

are placed at the corners of the triangle shown below. What is the force on 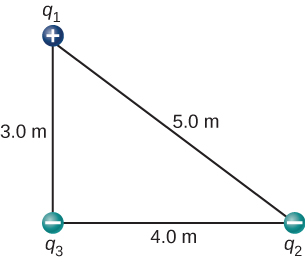 What is the force on the charge q at the lower-right-hand corner of the square shown here? 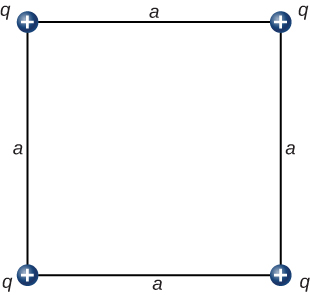 What is the force of

Coulomb force
another term for the electrostatic force

electrostatic force
amount and direction of attraction or repulsion between two charged bodies; the assumption is that the source charges remain motionless

electrostatics
study of charged objects which are not in motion