Now that we have some experience calculating electric fields, let’s try to gain some insight into the geometry of electric fields. As mentioned earlier, our model is that the charge on an object (the source charge) alters space in the region around it in such a way that when another charged object (the test charge) is placed in that region of space, that test charge experiences an electric force. The concept of electric field lines, and of electric field line diagrams, enables us to visualize the way in which the space is altered, allowing us to visualize the field. The purpose of this section is to enable you to create sketches of this geometry, so we will list the specific steps and rules involved in creating an accurate and useful sketch of an electric field.

It is important to remember that electric fields are three-dimensional. Although in this book we include some pseudo-three-dimensional images, several of the diagrams that you’ll see (both here, and in subsequent chapters) will be two-dimensional projections, or cross-sections. Always keep in mind that in fact, you’re looking at a three-dimensional phenomenon.

The electric field of a positive point charge. A large number of field vectors are shown. Like all vector arrows, the length of each vector is proportional to the magnitude of the field at each point. (a) Field in two dimensions; (b) field in three dimensions. 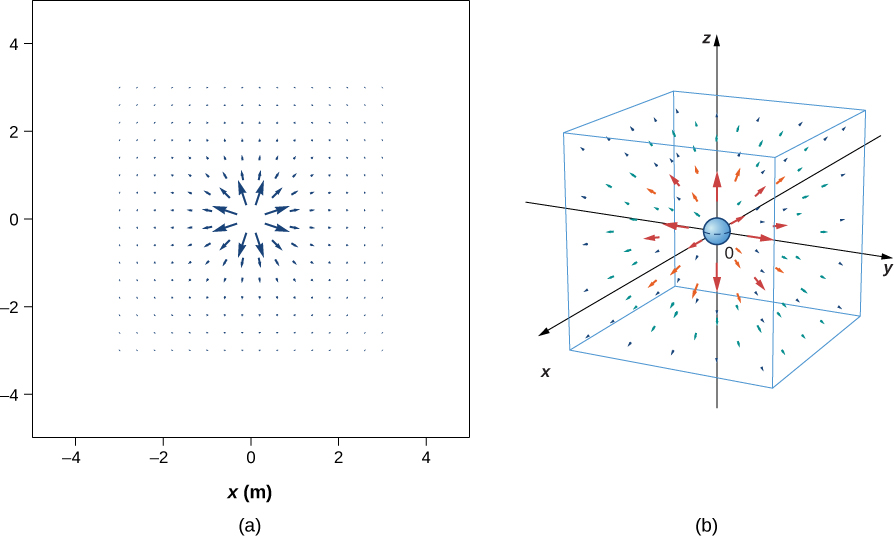 This diagram is correct, but it becomes less useful as the source charge distribution becomes more complicated. For example, consider the vector field diagram of a dipole ((Figure)). 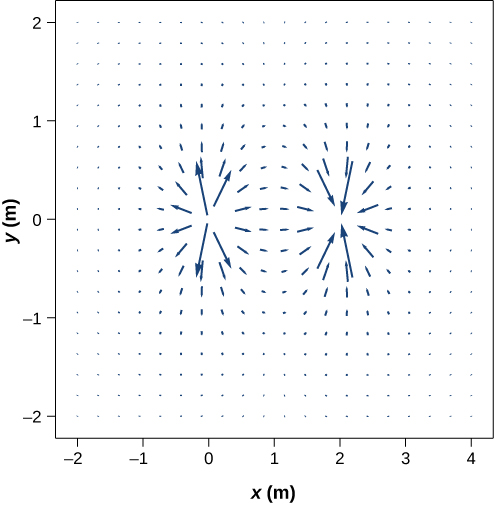 There is a more useful way to present the same information. Rather than drawing a large number of increasingly smaller vector arrows, we instead connect all of them together, forming continuous lines and curves, as shown in (Figure). 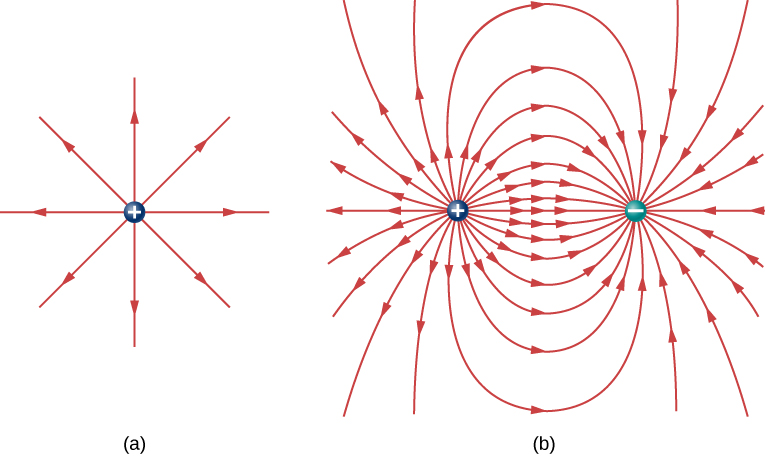 Although it may not be obvious at first glance, these field diagrams convey the same information about the electric field as do the vector diagrams. First, the direction of the field at every point is simply the direction of the field vector at that same point. In other words, at any point in space, the field vector at each point is tangent to the field line at that same point. The arrowhead placed on a field line indicates its direction. 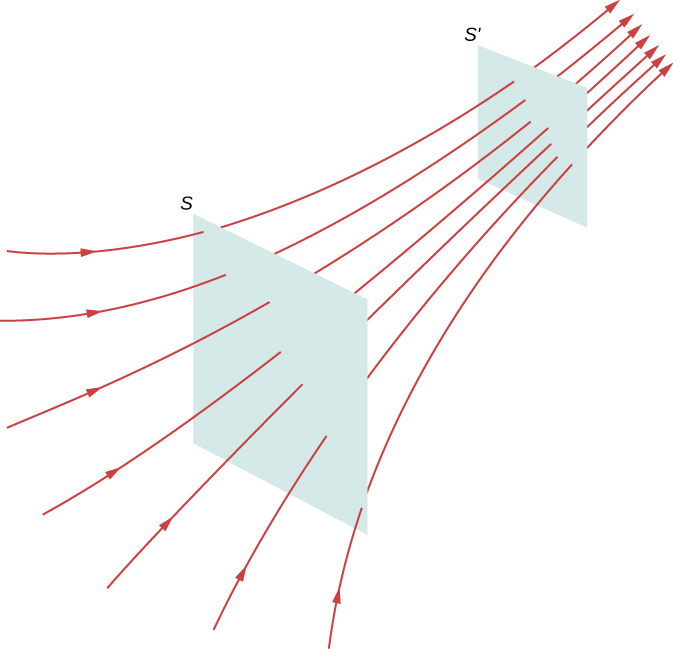 In (Figure), the same number of field lines passes through both surfaces (S and

but the surface S is larger than surface

. Therefore, the density of field lines (number of lines per unit area) is larger at the location of

, indicating that the electric field is stronger at the location of

than at S. The rules for creating an electric field diagram are as follows.

Field lines for three groups of discrete charges are shown in (Figure). Since the charges in parts (a) and (b) have the same magnitude, the same number of field lines are shown starting from or terminating on each charge. In (c), however, we draw three times as many field lines leaving the

charge as entering the

. The field lines that do not terminate at

emanate outward from the charge configuration, to infinity.

Three typical electric field diagrams. (a) A dipole. (b) Two identical charges. (c) Two charges with opposite signs and different magnitudes. Can you tell from the diagram which charge has the larger magnitude?

The ability to construct an accurate electric field diagram is an important, useful skill; it makes it much easier to estimate, predict, and therefore calculate the electric field of a source charge. The best way to develop this skill is with software that allows you to place source charges and then will draw the net field upon request. We strongly urge you to search the Internet for a program. Once you’ve found one you like, run several simulations to get the essential ideas of field diagram construction. Then practice drawing field diagrams, and checking your predictions with the computer-drawn diagrams.

One example of a field-line drawing program is from the PhET “Charges and Fields” simulation.

If a point charge is released from rest in a uniform electric field, will it follow a field line? Will it do so if the electric field is not uniform?

Under what conditions, if any, will the trajectory of a charged particle not follow a field line?

How would you experimentally distinguish an electric field from a gravitational field?

At the surface of Earth, the gravitational field is always directed in toward Earth’s center. An electric field could move a charged particle in a different direction than toward the center of Earth. This would indicate an electric field is present.

What is the ratio of the number of electric field lines leaving a charge 10q and a charge q?

Which of the following electric field lines are incorrect for point charges? Explain why. 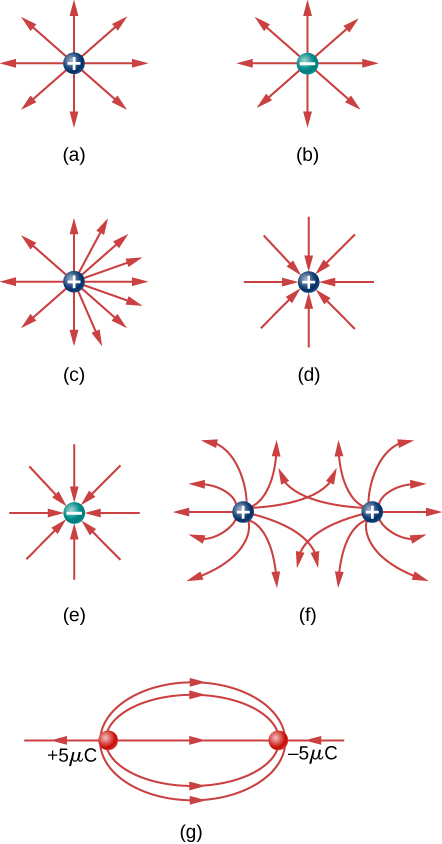 In this exercise, you will practice drawing electric field lines. Make sure you represent both the magnitude and direction of the electric field adequately. Note that the number of lines into or out of charges is proportional to the charges.

(a) Draw the electric field lines map for two charges

(b) Draw the electric field lines map for two charges 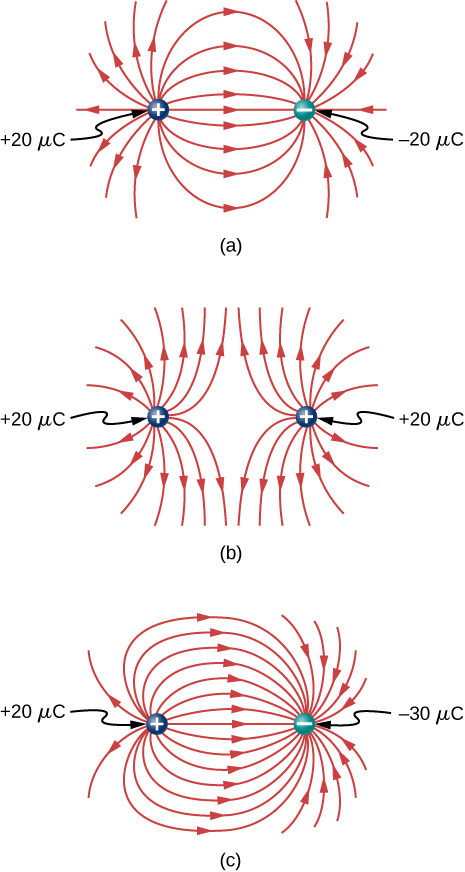 fixed at the corners of an equilateral triangle of side 2 cm.

Two charges of equal magnitude but opposite sign make up an electric dipole. A quadrupole consists of two electric dipoles are placed anti-parallel at two edges of a square as shown. 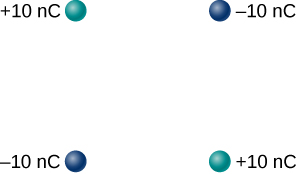 Draw the electric field of the charge distribution. 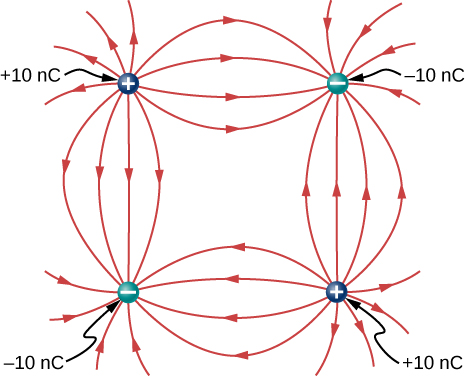 . Show that it is then impossible to draw continous field lines so that their number per unit area is proportional to E.

field line density
number of field lines per square meter passing through an imaginary area; its purpose is to indicate the field strength at different points in space