As we showed in the preceding section, the net electric force on a test charge is the vector sum of all the electric forces acting on it, from all of the various source charges, located at their various positions. But what if we use a different test charge, one with a different magnitude, or sign, or both? Or suppose we have a dozen different test charges we wish to try at the same location? We would have to calculate the sum of the forces from scratch. Fortunately, it is possible to define a quantity, called the electric field, which is independent of the test charge. It only depends on the configuration of the source charges, and once found, allows us to calculate the force on any test charge.

Suppose we have N source charges

We can rewrite this as

This expression is called the electric field at position

of the N source charges. Here, P is the location of the point in space where you are calculating the field and is relative to the positions

of the source charges ((Figure)). Note that we have to impose a coordinate system to solve actual problems.

Each of these eight source charges creates its own electric field at every point in space; shown here are the field vectors at an arbitrary point P. Like the electric force, the net electric field obeys the superposition principle. 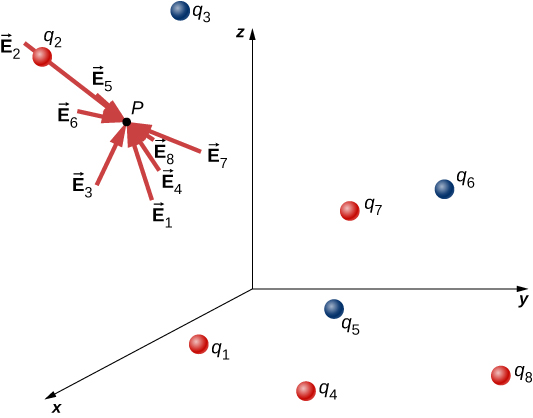 In this respect, the electric field

of a point charge is similar to the gravitational field

and then we calculate the resulting force (i.e., weight) on different masses. Also, the general expression for calculating

at arbitrary distances from the center of Earth (i.e., not just near Earth’s surface) is very similar to the expression for

, where G is a proportionality constant, playing the same role for

is calculated once and is then used in an endless number of problems.

To push the analogy further, notice the units of the electric field: From

, the units of E are newtons per coulomb, N/C, that is, the electric field applies a force on each unit charge. Now notice the units of g: From

The Meaning of “Field”

Recall from your studies of gravity that the word “field” in this context has a precise meaning. A field, in physics, is a physical quantity whose value depends on (is a function of) position, relative to the source of the field. In the case of the electric field, (Figure) shows that the value of

(both the magnitude and the direction) depends on where in space the point P is located, measured from the locations

of the source charges

Also, as you did with the gravitational field of an object with mass, you should picture the electric field of a charge-bearing object (the source charge) as a continuous, immaterial substance that surrounds the source charge, filling all of space—in principle, to

in all directions. The field exists at every physical point in space. To put it another way, the electric charge on an object alters the space around the charged object in such a way that all other electrically charged objects in space experience an electric force as a result of being in that field. The electric field, then, is the mechanism by which the electric properties of the source charge are transmitted to and through the rest of the universe. (Again, the range of the electric force is infinite.)

We will see in subsequent chapters that the speed at which electrical phenomena travel is the same as the speed of light. There is a deep connection between the electric field and light.

at position P, then calculate the field of

at P, while—and this is the crucial idea—ignoring the field of, and indeed even the existence of,

We can repeat this process, calculating the field of each individual source charge, independently of the existence of any of the other charges. The total electric field, then, is the vector sum of all these fields. That, in essence, is what (Figure) says.

In the next section, we describe how to determine the shape of an electric field of a source charge distribution and how to sketch it.

The Direction of the Field

Direction of the Electric Field

By convention, all electric fields

Add charges to the Electric Field of Dreams and see how they react to the electric field. Turn on a background electric field and adjust the direction and magnitude.

The E-field of an Atom In an ionized helium atom, the most probable distance between the nucleus and the electron is

. What is the electric field due to the nucleus at the location of the electron?

A schematic representation of a helium atom. Again, helium physically looks nothing like this, but this sort of diagram is helpful for calculating the electric field of the nucleus. 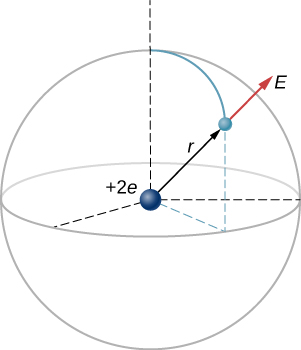 Solution The electric field is calculated by

Since there is only one source charge (the nucleus), this expression simplifies to

(since there are two protons) and r is given; substituting gives

is radially away from the nucleus in all directions. Why? Because a positive test charge placed in this field would accelerate radially away from the nucleus (since it is also positively charged), and again, the convention is that the direction of the electric field vector is defined in terms of the direction of the force it would apply to positive test charges.

that are a distance d apart ((Figure)). Check that your result is consistent with what you’d expect when

(b) The same as part (a), only this time make the right-hand charge

Finding the field of two identical source charges at the point P. Due to the symmetry, the net field at P is entirely vertical. (Notice that this is not true away from the midline between the charges.) 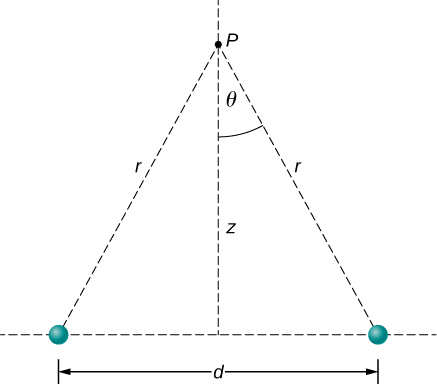 Strategy We add the two fields as vectors, per (Figure). Notice that the system (and therefore the field) is symmetrical about the vertical axis; as a result, the horizontal components of the field vectors cancel. This simplifies the math. Also, we take care to express our final answer in terms of only quantities that are given in the original statement of the problem: q, z, d, and constants

Significance It is a very common and very useful technique in physics to check whether your answer is reasonable by evaluating it at extreme cases. In this example, we should evaluate the field expressions for the cases

, and confirm that the resulting expressions match our physical expectations. Let’s do so:

Let’s start with (Figure), the field of two identical charges. From far away (i.e.,

the two source charges should “merge” and we should then “see” the field of just one charge, of size 2q. So, let

then we can neglect

in (Figure) to obtain

which is the correct expression for a field at a distance z away from a charge 2q.

Next, we consider the field of equal and opposite charges, (Figure). It can be shown (via a Taylor expansion) that for

which is the field of a dipole, a system that we will study in more detail later. (Note that the units of

are still correct in this expression, since the units of d in the numerator cancel the unit of the “extra” z in the denominator.) If z is very large

, as it should; the two charges “merge” and so cancel out.

Check Your Understanding What is the electric field due to a single point particle?

Try this simulation of electric field hockey to get the charge in the goal by placing other charges on the field.

When measuring an electric field, could we use a negative rather than a positive test charge?

Either sign of the test charge could be used, but the convention is to use a positive test charge.

During fair weather, the electric field due to the net charge on Earth points downward. Is Earth charged positively or negatively?

If the electric field at a point on the line between two charges is zero, what do you know about the charges?

A particle of charge

experiences an upward force of magnitude

is placed there, what is the force on it?

On a typical clear day, the atmospheric electric field points downward and has a magnitude of approximately 100 N/C. Compare the gravitational and electric forces on a small dust particle of mass

that carries a single electron charge. What is the acceleration (both magnitude and direction) of the dust particle?

Consider an electron that is

from an alpha particle

Each the balls shown below carries a charge q and has a mass m. The length of each thread is l, and at equilibrium, the balls are separated by an angle

vary with q and l? Show that 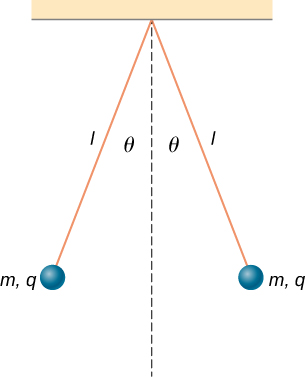 The electric field in a particular thundercloud is

What is the acceleration of an electron in this field?

A small piece of cork whose mass is 2.0 g is given a charge of

What electric field is needed to place the cork in equilibrium under the combined electric and gravitational forces?

If the electric field is

at a distance of 50 cm from a point charge q, what is the value of q?

What is the force on the electron in that orbit?

from the nucleus? (b) What is the force this electric field exerts on a second oxygen nucleus placed at that point?

are held 25.0 cm apart. (a) What is the electric field at a point 5.0 cm from the negative charge and along the line between the two charges? (b)What is the force on an electron placed at that point?

are placed 1.0 m apart. (a) What is the electric field at a point midway between them? (b) What is the force on a charge

is to the right of

the electric field vector from both charges point to the right. a.

Can you arrange the two point charges

along the x-axis so that

are fixed on the x-axis at

right triangle geometry. The x-components of the electric field at

cancel. The y-components give

.
At the origin we have a a negative charge of magnitide

electric field
physical phenomenon created by a charge; it “transmits” a force between a two charges