The concept of flux describes how much of something goes through a given area. More formally, it is the dot product of a vector field (in this chapter, the electric field) with an area. You may conceptualize the flux of an electric field as a measure of the number of electric field lines passing through an area ((Figure)). The larger the area, the more field lines go through it and, hence, the greater the flux; similarly, the stronger the electric field is (represented by a greater density of lines), the greater the flux. On the other hand, if the area rotated so that the plane is aligned with the field lines, none will pass through and there will be no flux.

A macroscopic analogy that might help you imagine this is to put a hula hoop in a flowing river. As you change the angle of the hoop relative to the direction of the current, more or less of the flow will go through the hoop. Similarly, the amount of flow through the hoop depends on the strength of the current and the size of the hoop. Again, flux is a general concept; we can also use it to describe the amount of sunlight hitting a solar panel or the amount of energy a telescope receives from a distant star, for example.

To quantify this idea, (Figure)(a) shows a planar surface

that is perpendicular to the uniform electric field

If N field lines pass through

, then we know from the definition of electric field lines (Electric Charges and Fields) that

is the electric flux through

. We represent the electric flux through an open surface like

. Electric flux is a scalar quantity and has an SI unit of newton-meters squared per coulomb (

may also be written as

, demonstrating that electric flux is a measure of the number of field lines crossing a surface.

(a) A planar surface

is perpendicular to the electric field

whose projection onto the xz-plane is

.The same number of field lines cross each surface.

Now consider a planar surface that is not perpendicular to the field. How would we represent the electric flux? (Figure)(b) shows a surface

that is inclined at an angle

to the xz-plane and whose projection in that plane is

). The areas are related by

Because the same number of field lines crosses both

, the fluxes through both surfaces must be the same. The flux through

as a unit vector normal to

Check out this video to observe what happens to the flux as the area changes in size and angle, or the electric field changes in strength.

For discussing the flux of a vector field, it is helpful to introduce an area vector

The area vector of a flat surface of area A has the following magnitude and direction:

Since the normal to a flat surface can point in either direction from the surface, the direction of the area vector of an open surface needs to be chosen, as shown in (Figure).

The direction of the area vector of an open surface needs to be chosen; it could be either of the two cases displayed here. The area vector of a part of a closed surface is defined to point from the inside of the closed space to the outside. This rule gives a unique direction.

is a unit normal to a surface, it has two possible directions at every point on that surface ((Figure)(a)). For an open surface, we can use either direction, as long as we are consistent over the entire surface. Part (c) of the figure shows several cases.

(a) Two potential normal vectors arise at every point on a surface. (b) The outward normal is used to calculate the flux through a closed surface. (c) Only

has been given a consistent set of normal vectors that allows us to define the flux through the surface. 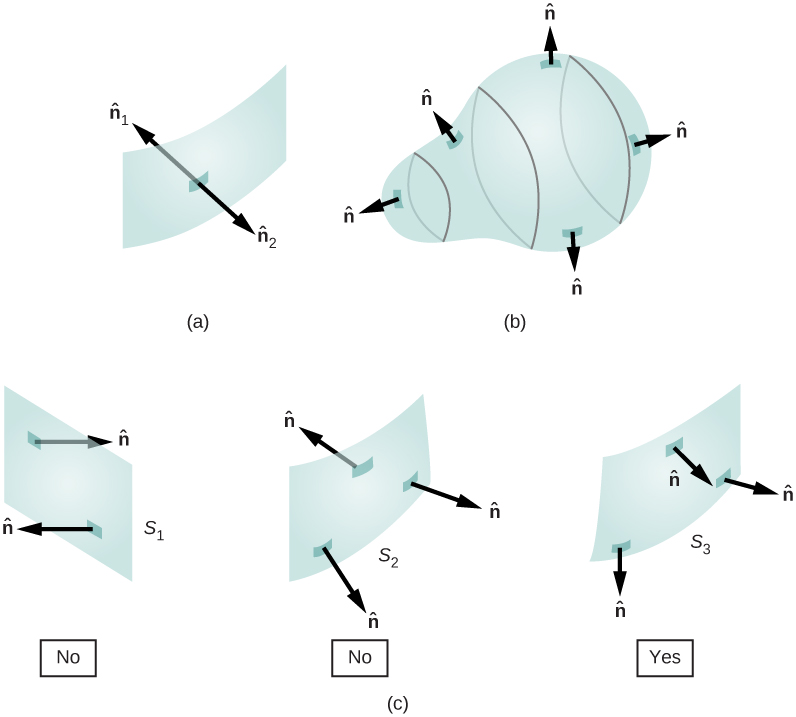 However, if a surface is closed, then the surface encloses a volume. In that case, the direction of the normal vector at any point on the surface points from the inside to the outside. On a closed surface such as that of (Figure)(b),

is chosen to be the outward normal at every point, to be consistent with the sign convention for electric charge.

(Figure) shows the electric field of an oppositely charged, parallel-plate system and an imaginary box between the plates. The electric field between the plates is uniform and points from the positive plate toward the negative plate. A calculation of the flux of this field through various faces of the box shows that the net flux through the box is zero. Why does the flux cancel out here? 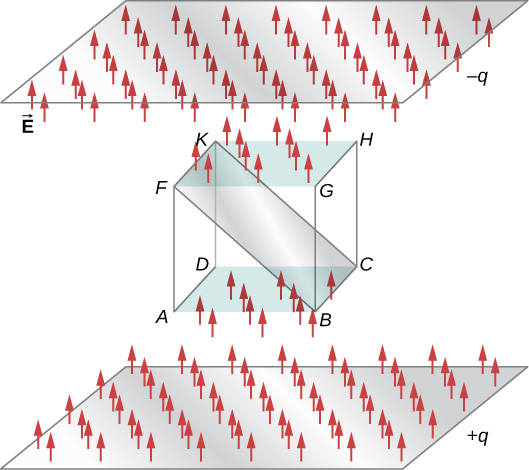 is positive; when they enter (or “flow into”) the surface,

Any smooth, non-flat surface can be replaced by a collection of tiny, approximately flat surfaces, as shown in (Figure). If we divide a surface S into small patches, then we notice that, as the patches become smaller, they can be approximated by flat surfaces. This is similar to the way we treat the surface of Earth as locally flat, even though we know that globally, it is approximately spherical.

A surface is divided into patches to find the flux. 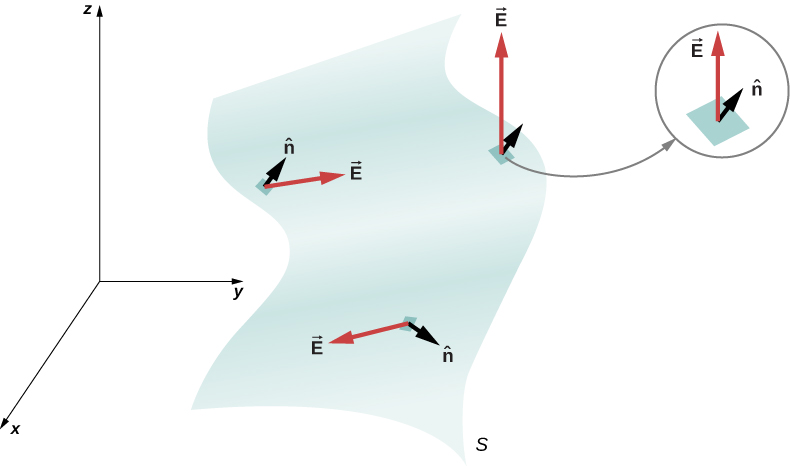 (We have used the symbol

Therefore, we can write the electric flux

through the area of the ith patch as

The flux through each of the individual patches can be constructed in this manner and then added to give us an estimate of the net flux through the entire surface S, which we denote simply as

This estimate of the flux gets better as we decrease the size of the patches. However, when you use smaller patches, you need more of them to cover the same surface. In the limit of infinitesimally small patches, they may be considered to have area dA and unit normal

. Since the elements are infinitesimal, they may be assumed to be planar, and

may be taken as constant over any element. Then the flux

through an area dA is given by

It is positive when the angle between

and negative when the angle is greater than

. The net flux is the sum of the infinitesimal flux elements over the entire surface. With infinitesimally small patches, you need infinitely many patches, and the limit of the sum becomes a surface integral. With

representing the integral over S,

In practical terms, surface integrals are computed by taking the antiderivatives of both dimensions defining the area, with the edges of the surface in question being the bounds of the integral.

where the circle through the integral symbol simply means that the surface is closed, and we are integrating over the entire thing. If you only integrate over a portion of a closed surface, that means you are treating a subset of it as an open surface.

points in the direction of the positive z-axis ((Figure)). What is the electric flux through a rectangle with sides a and b in the (a) xy-plane and in the (b) xz-plane?

Calculating the flux of

through a rectangular surface. 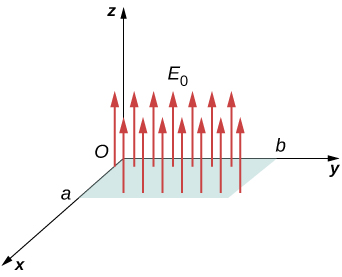 Strategy Apply the definition of flux:

, where the definition of dot product is crucial.

Significance The relative directions of the electric field and area can cause the flux through the area to be zero.

points in the direction of the positive z-axis ((Figure)). What is the net electric flux through a cube?

Calculating the flux of

through a closed cubic surface.

Strategy Apply the definition of flux:

, noting that a closed surface eliminates the ambiguity in the direction of the area vector.

Solution Through the top face of the cube,

Through the bottom face of the cube,

The net flux is

Significance The net flux of a uniform electric field through a closed surface is zero.

above the xy-plane, as shown in (Figure). What is the electric flux through the plane surface of area

located in the xz-plane? Assume that

points in the positive y-direction.

The electric field produces a net electric flux through the surface S. 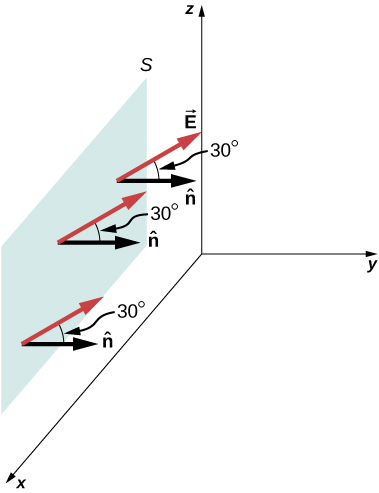 , where the direction and magnitude of the electric field are constant.

Solution The angle between the uniform electric field

and the unit normal

to the planar surface is

. Since both the direction and magnitude are constant, E comes outside the integral. All that is left is a surface integral over dA, which is A. Therefore, using the open-surface equation, we find that the electric flux through the surface is

Significance Again, the relative directions of the field and the area matter, and the general equation with the integral will simplify to the simple dot product of area and electric field.

Check Your Understanding What angle should there be between the electric field and the surface shown in (Figure) in the previous example so that no electric flux passes through the surface?

Place it so that its unit normal is perpendicular to

through the rectangular surface shown in (Figure)?

Since the electric field is not constant over the surface, an integration is necessary to determine the flux. 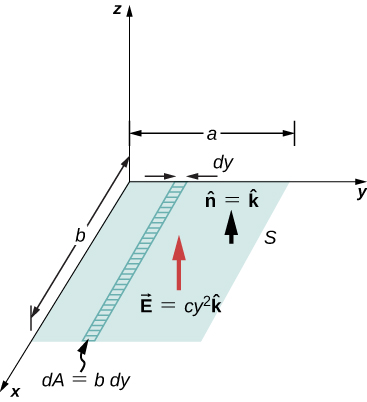 . We assume that the unit normal

to the given surface points in the positive z-direction, so

Since the electric field is not uniform over the surface, it is necessary to divide the surface into infinitesimal strips along which

is essentially constant. As shown in (Figure), these strips are parallel to the x-axis, and each strip has an area

Solution From the open surface integral, we find that the net flux through the rectangular surface is

Significance For a non-constant electric field, the integral method is required.

Check Your Understanding If the electric field in (Figure) is

what is the flux through the rectangular area?

to obtain (a) the maximum flux and (b) the minimum flux through the area.

What are the maximum and minimum values of the flux in the preceding question?

False. The net electric flux crossing a closed surface is always zero if and only if the net charge enclosed is zero.

A uniform electric field of magnitude

is perpendicular to a square sheet with sides 2.0 m long. What is the electric flux through the sheet?

to the field. Find the flux for both directions of the unit normal to the sheet.

electric field opposite to unit normal

Find the electric flux through a rectangular area

between two parallel plates where there is a constant electric field of 30 N/C for the following orientations of the area: (a) parallel to the plates, (b) perpendicular to the plates, and (c) the normal to the area making a

angle with the direction of the electric field. Note that this angle can also be given as

when the area is parallel to the plate. Find the charge density on the sheet.

face each other with a separation of 3 mm between them. The plates are charged with equal amount of opposite charges,

. The charges on the plates face each other. Find the flux through a circle of radius 3 cm between the plates when the normal to the circle makes an angle of

with a line perpendicular to the plates. Note that this angle can also be given as

A square surface of area

is in a space of uniform electric field of magnitude

. Note that these angles can also be given as

A vector field is pointed along the z-axis,

. (b) Do the same through a rectangle in the yz-plane between

. (Leave your answer as an integral.)

What is its electric flux through a circular area of radius 2.0 m that lies in the xy-plane?

Repeat the previous problem, given that the circular area is (a) in the yz-plane and (b)

An infinite charged wire with charge per unit length

lies along the central axis of a cylindrical surface of radius r and length l. What is the flux through the surface due to the electric field of the charged wire?

flux
quantity of something passing through a given area