90 Electric Generators and Back Emf

A variety of important phenomena and devices can be understood with Faraday’s law. In this section, we examine two of these.

Electric generators induce an emf by rotating a coil in a magnetic field, as briefly discussed in Motional Emf. We now explore generators in more detail. Consider the following example.

When this generator coil is rotated through one-fourth of a revolution, the magnetic flux

changes from its maximum to zero, inducing an emf. 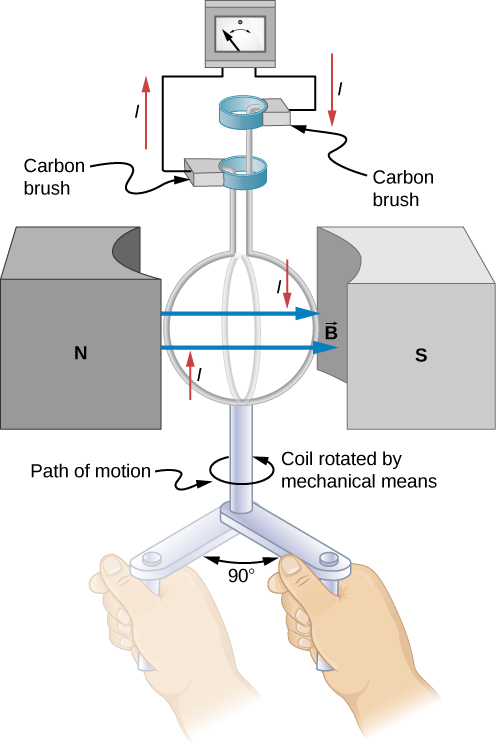 Strategy Faraday’s law of induction is used to find the emf induced:

We recognize this situation as the same one in (Figure). According to the diagram, the projection of the surface normal vector

to the magnetic field is initially

and this is inserted by the definition of the dot product. The magnitude of the magnetic field and area of the loop are fixed over time, which makes the integration simplify quickly. The induced emf is written out using Faraday’s law:

Solution We are given that

The area of the loop is

Significance This is a practical average value, similar to the 120 V used in household power.

The emf calculated in (Figure) is the average over one-fourth of a revolution. What is the emf at any given instant? It varies with the angle between the magnetic field and a perpendicular to the coil. We can get an expression for emf as a function of time by considering the motional emf on a rotating rectangular coil of width w and height l in a uniform magnetic field, as illustrated in (Figure).

A generator with a single rectangular coil rotated at constant angular velocity in a uniform magnetic field produces an emf that varies sinusoidally in time. Note the generator is similar to a motor, except the shaft is rotated to produce a current rather than the other way around. 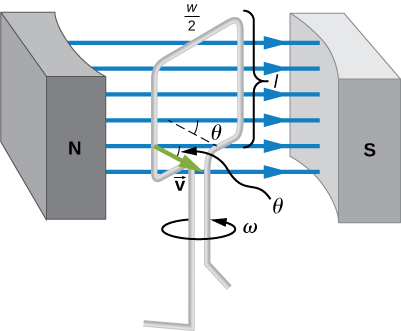 Charges in the wires of the loop experience the magnetic force, because they are moving in a magnetic field. Charges in the vertical wires experience forces parallel to the wire, causing currents. But those in the top and bottom segments feel a force perpendicular to the wire, which does not cause a current. We can thus find the induced emf by considering only the side wires. Motional emf is given to be

with B, so that its component perpendicular to B is v sin

(see (Figure)). Thus, in this case, the emf induced on each side is

, and they are in the same direction. The total emf around the loop is then

This expression is valid, but it does not give emf as a function of time. To find the time dependence of emf, we assume the coil rotates at a constant angular velocity

is related to angular velocity by

Noting that the area of the loop is

and allowing for N loops, we find that

in a uniform magnetic field B. This can also be expressed as

is the peak emf, since the maximum value of

. Note that the frequency of the oscillation is

and the period is

(Figure) shows a graph of emf as a function of time, and it now seems reasonable that ac voltage is sinusoidal.

The emf of a generator is sent to a light bulb with the system of rings and brushes shown. The graph gives the emf of the generator as a function of time, where

is the peak emf. The period is

where f is the frequency. 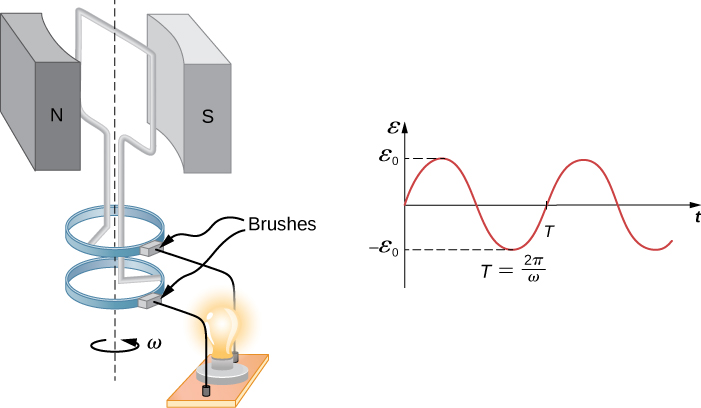 The fact that the peak emf is

makes good sense. The greater the number of coils, the larger their area, and the stronger the field, the greater the output voltage. It is interesting that the faster the generator is spun (greater

), the greater the emf. This is noticeable on bicycle generators—at least the cheaper varieties.

(Figure) shows a scheme by which a generator can be made to produce pulsed dc. More elaborate arrangements of multiple coils and split rings can produce smoother dc, although electronic rather than mechanical means are usually used to make ripple-free dc. 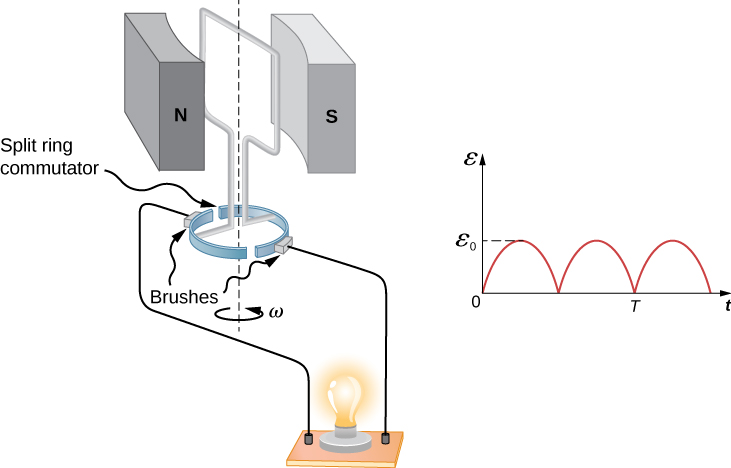 In real life, electric generators look a lot different from the figures in this section, but the principles are the same. The source of mechanical energy that turns the coil can be falling water (hydropower), steam produced by the burning of fossil fuels, or the kinetic energy of wind. (Figure) shows a cutaway view of a steam turbine; steam moves over the blades connected to the shaft, which rotates the coil within the generator. The generation of electrical energy from mechanical energy is the basic principle of all power that is sent through our electrical grids to our homes.

Steam turbine/generator. The steam produced by burning coal impacts the turbine blades, turning the shaft, which is connected to the generator. 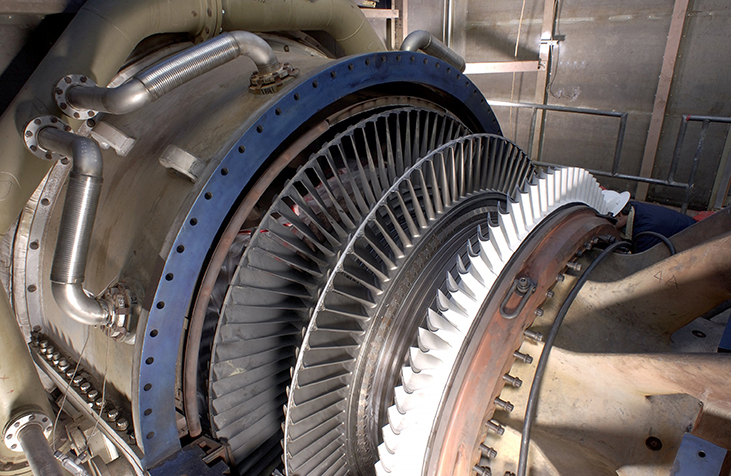 Generators convert mechanical energy into electrical energy, whereas motors convert electrical energy into mechanical energy. Thus, it is not surprising that motors and generators have the same general construction. A motor works by sending a current through a loop of wire located in a magnetic field. As a result, the magnetic field exerts torque on the loop. This rotates a shaft, thereby extracting mechanical work out of the electrical current sent in initially. (Refer to Force and Torque on a Current Loop for a discussion on motors that will help you understand more about them before proceeding.)

When the coil of a motor is turned, magnetic flux changes through the coil, and an emf (consistent with Faraday’s law) is induced. The motor thus acts as a generator whenever its coil rotates. This happens whether the shaft is turned by an external input, like a belt drive, or by the action of the motor itself. That is, when a motor is doing work and its shaft is turning, an emf is generated. Lenz’s law tells us the emf opposes any change, so that the input emf that powers the motor is opposed by the motor’s self-generated emf, called the back emf of the motor ((Figure)). 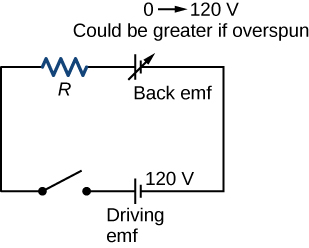 The generator output of a motor is the difference between the supply voltage and the back emf. The back emf is zero when the motor is first turned on, meaning that the coil receives the full driving voltage and the motor draws maximum current when it is on but not turning. As the motor turns faster, the back emf grows, always opposing the driving emf, and reduces both the voltage across the coil and the amount of current it draws. This effect is noticeable in many common situations. When a vacuum cleaner, refrigerator, or washing machine is first turned on, lights in the same circuit dim briefly due to the IR drop produced in feeder lines by the large current drawn by the motor.

When a motor first comes on, it draws more current than when it runs at its normal operating speed. When a mechanical load is placed on the motor, like an electric wheelchair going up a hill, the motor slows, the back emf drops, more current flows, and more work can be done. If the motor runs at too low a speed, the larger current can overheat it (via resistive power in the coil,

perhaps even burning it out. On the other hand, if there is no mechanical load on the motor, it increases its angular velocity

until the back emf is nearly equal to the driving emf. Then the motor uses only enough energy to overcome friction.

Eddy currents in iron cores of motors can cause troublesome energy losses. These are usually minimized by constructing the cores out of thin, electrically insulated sheets of iron. The magnetic properties of the core are hardly affected by the lamination of the insulating sheet, while the resistive heating is reduced considerably. Consider, for example, the motor coils represented in (Figure). The coils have an equivalent resistance of

and are driven by an emf of 48.0 V. Shortly after being turned on, they draw a current

of energy as heat transfer. Under normal operating conditions for this motor, suppose the back emf is 40.0 V. Then at operating speed, the total voltage across the coils is 8.0 V (48.0 V minus the 40.0 V back emf), and the current drawn is

Under normal load, then, the power dissipated is

This does not cause a problem for this motor, whereas the former 5.76 kW would burn out the coils if sustained.

A Series-Wound Motor in Operation The total resistance

of a series-wound dc motor is

), the motor draws 10 A while running at constant angular velocity. (a) What is the back emf induced in the rotating coil, 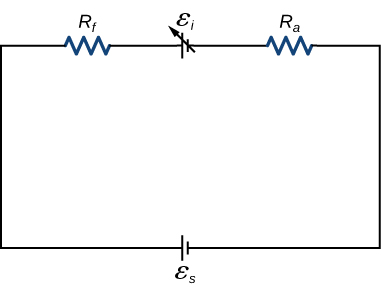 Significance Notice that we have an energy balance in part (d):

Design a current loop that, when rotated in a uniform magnetic field of strength 0.10 T, will produce an emf

three turns with an area of 1 m2

A flat, square coil of 20 turns that has sides of length 15.0 cm is rotating in a magnetic field of strength 0.050 T. If the maximum emf produced in the coil is 30.0 mV, what is the angular velocity of the coil?

A 50-turn rectangular coil with dimensions

rotates in a uniform magnetic field of magnitude 0.75 T at 3600 rev/min. (a) Determine the emf induced in the coil as a function of time. (b) If the coil is connected to a

resistor, what is the power as a function of time required to keep the coil turning at 3600 rpm? (c) Answer part (b) if the coil is connected to a 2000-

The square armature coil of an alternating current generator has 200 turns and is 20.0 cm on side. When it rotates at 3600 rpm, its peak output voltage is 120 V. (a) What is the frequency of the output voltage? (b) What is the strength of the magnetic field in which the coil is turning?

A flip coil is a relatively simple device used to measure a magnetic field. It consists of a circular coil of N turns wound with fine conducting wire. The coil is attached to a ballistic galvanometer, a device that measures the total charge that passes through it. The coil is placed in a magnetic field

such that its face is perpendicular to the field. It is then flipped through

is uniform over it. (b) How can you determine whether or not the magnetic field is perpendicular to the face of the coil?

a. B is proportional to Q; b. If the coin turns easily, the magnetic field is perpendicular. If the coin is at an equilibrium position, it is parallel.

The flip coil of the preceding problem has a radius of 3.0 cm and is wound with 40 turns of copper wire. The total resistance of the coil and ballistic galvanometer is

When the coil is flipped through

in a magnetic field

a change of 0.090 C flows through the ballistic galvanometer. (a) Assuming that

and the face of the coil are initially perpendicular, what is the magnetic field? (b) If the coil is flipped through

what is the reading of the galvanometer?

and an armature resistance of 10

back emf
emf generated by a running motor, because it consists of a coil turning in a magnetic field; it opposes the voltage powering the motor

electric generator
device for converting mechanical work into electric energy; it induces an emf by rotating a coil in a magnetic field