When a free positive charge q is accelerated by an electric field, it is given kinetic energy ((Figure)). The process is analogous to an object being accelerated by a gravitational field, as if the charge were going down an electrical hill where its electric potential energy is converted into kinetic energy, although of course the sources of the forces are very different. Let us explore the work done on a charge q by the electric field in this process, so that we may develop a definition of electric potential energy.

A charge accelerated by an electric field is analogous to a mass going down a hill. In both cases, potential energy decreases as kinetic energy increases,

. Work is done by a force, but since this force is conservative, we can write 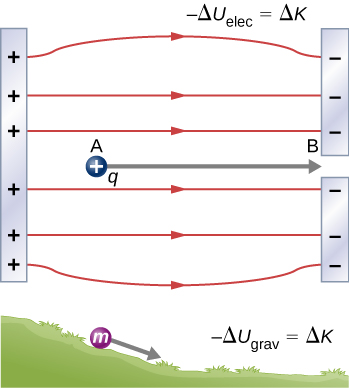 The electrostatic or Coulomb force is conservative, which means that the work done on q is independent of the path taken, as we will demonstrate later. This is exactly analogous to the gravitational force. When a force is conservative, it is possible to define a potential energy associated with the force. It is usually easier to work with the potential energy (because it depends only on position) than to calculate the work directly.

To show this explicitly, consider an electric charge

fixed at the origin and move another charge

toward q in such a manner that, at each instant, the applied force

on Q ((Figure)). The work done by the applied force

Displacement of “test” charge Q in the presence of fixed “source” charge q.

done by the applied force

when the particle moves from

may be calculated by

Since the applied force

on Q, the two forces have equal magnitude and opposite directions. Therefore, the applied force is

where we have defined positive to be pointing away from the origin and r is the distance from the origin. The directions of both the displacement and the applied force in the system in (Figure) are parallel, and thus the work done on the system is positive.

In the system in (Figure), the Coulomb force acts in the opposite direction to the displacement; therefore, the work is negative. However, we have increased the potential energy in the two-charge system.

Kinetic Energy of a Charged Particle A

charge Q is initially at rest a distance of 10 cm (

The charge Q is repelled by q, thus having work done on it and gaining kinetic energy.

Strategy Calculate the work with the usual definition. Since Q started from rest, this is the same as the kinetic energy.

This is also the value of the kinetic energy at

Check Your Understanding If Q has a mass of

what is the speed of Q at

In this example, the work W done to accelerate a positive charge from rest is positive and results from a loss in U, or a negative

. A value for U can be found at any point by taking one point as a reference and calculating the work needed to move a charge to the other point.

Work W done to accelerate a positive charge from rest is positive and results from a loss in U, or a negative

In polar coordinates with q at the origin and Q located at r, the displacement element vector is

and thus the work becomes

Notice that this result only depends on the endpoints and is otherwise independent of the path taken. To explore this further, compare path

The work on segments

are zero due to the electrical force being perpendicular to the displacement along these paths. Therefore, work on paths 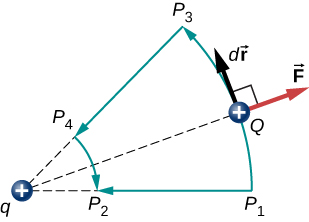 are arcs of circles centered at q. Since the force on Q points either toward or away from q, no work is done by a force balancing the electric force, because it is perpendicular to the displacement along these arcs. Therefore, the only work done is along segment

which is identical to

the net work would be zero ((Figure)). Recall that this is how we determine whether a force is conservative or not. Hence, because the electric force is related to the electric field by

, the electric field is itself conservative. That is,

Note that Q is a constant.

A closed path in an electric field. The net work around this path is zero. 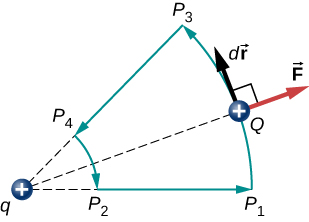 Another implication is that we may define an electric potential energy. Recall that the work done by a conservative force is also expressed as the difference in the potential energy corresponding to that force. Therefore, the work

and, by (Figure), the difference in potential energy

of the test charge Q between the two points is

Therefore, we can write a general expression for the potential energy of two point charges (in spherical coordinates):

We may take the second term to be an arbitrary constant reference level, which serves as the zero reference:

A convenient choice of reference that relies on our common sense is that when the two charges are infinitely far apart, there is no interaction between them. (Recall the discussion of reference potential energy in Potential Energy and Conservation of Energy.) Taking the potential energy of this state to be zero removes the term

This formula is symmetrical with respect to q and Q, so it is best described as the potential energy of the two-charge system.

Potential Energy of a Charged Particle A

charge Q is initially at rest a distance of 10 cm (

The charge Q is repelled by q, thus having work done on it and losing potential energy.

Strategy Calculate the potential energy with the definition given above:

Since Q started from rest, this is the same as the kinetic energy.

in the above example?

It has kinetic energy of

and potential energy of

since all of the potential energy gets converted to kinetic.

Due to Coulomb’s law, the forces due to multiple charges on a test charge Q superimpose; they may be calculated individually and then added. This implies that the work integrals and hence the resulting potential energies exhibit the same behavior. To demonstrate this, we consider an example of assembling a system of four charges.

at the vertices of a square of side 1.0 cm, starting each charge from infinity ((Figure)).

How much work is needed to assemble this charge configuration? 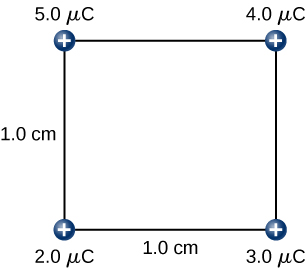 Strategy We bring in the charges one at a time, giving them starting locations at infinity and calculating the work to bring them in from infinity to their final location. We do this in order of increasing charge.

charge to the origin. Since there are no other charges at a finite distance from this charge yet, no work is done in bringing it from infinity,

Step 2. While keeping the

charge fixed at the origin, bring the

((Figure)). Now, the applied force must do work against the force exerted by the

charge fixed at the origin. The work done equals the change in the potential energy of the 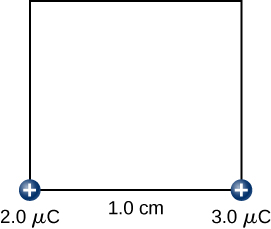 Step 3. While keeping the charges of

fixed in their places, bring in the

((Figure)). The work done in this step is 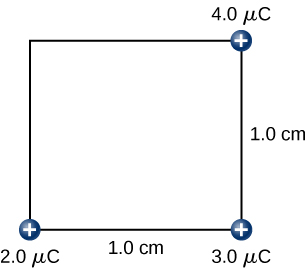 Step 4. Finally, while keeping the first three charges in their places, bring the

Hence, the total work done by the applied force in assembling the four charges is equal to the sum of the work in bringing each charge from infinity to its final position:

Check Your Understanding Is the electrical potential energy of two point charges positive or negative if the charges are of the same sign? Opposite signs? How does this relate to the work necessary to bring the charges into proximity from infinity?

positive, negative, and these quantities are the same as the work you would need to do to bring the charges in from infinity

The result from (Figure) may be extended to systems with any arbitrary number of charges. In this case, it is most convenient to write the formula as

The factor of 1/2 accounts for adding each pair of charges twice.

Would electric potential energy be meaningful if the electric field were not conservative?

No. We can only define potential energies for conservative fields.

Does the order in which we assemble a system of point charges affect the total work done?

No, though certain orderings may be simpler to compute.

fixed at a site with another charge

moving in the neighboring space. (a) Evaluate the potential energy of

starts from rest from a point 4.0 cm from

what will be its speed when it is 8.0 cm from

is held fixed in its place.)

are placed symmetrically along the x-axis at

starts from rest at

what is its speed when it reaches

To form a hydrogen atom, a proton is fixed at a point and an electron is brought from far away to a distance of

the average distance between proton and electron in a hydrogen atom. How much work is done?

(a) What is the average power output of a heart defibrillator that dissipates 400 J of energy in 10.0 ms? (b) Considering the high-power output, why doesn’t the defibrillator produce serious burns?