95 Energy in a Magnetic Field

The energy of a capacitor is stored in the electric field between its plates. Similarly, an inductor has the capability to store energy, but in its magnetic field. This energy can be found by integrating the magnetic energy density,

over the appropriate volume. To understand where this formula comes from, let’s consider the long, cylindrical solenoid of the previous section. Again using the infinite solenoid approximation, we can assume that the magnetic field is essentially constant and given by

everywhere inside the solenoid. Thus, the energy stored in a solenoid or the magnetic energy density times volume is equivalent to

With the substitution of (Figure), this becomes

Although derived for a special case, this equation gives the energy stored in the magnetic field of any inductor. We can see this by considering an arbitrary inductor through which a changing current is passing. At any instant, the magnitude of the induced emf is

so the power absorbed by the inductor is

The total energy stored in the magnetic field when the current increases from 0 to I in a time interval from 0 to t can be determined by integrating this expression:

(a) A coaxial cable is represented here by two hollow, concentric cylindrical conductors along which electric current flows in opposite directions. (b) The magnetic field between the conductors can be found by applying Ampère’s law to the dashed path. (c) The cylindrical shell is used to find the magnetic energy stored in a length l of the cable. 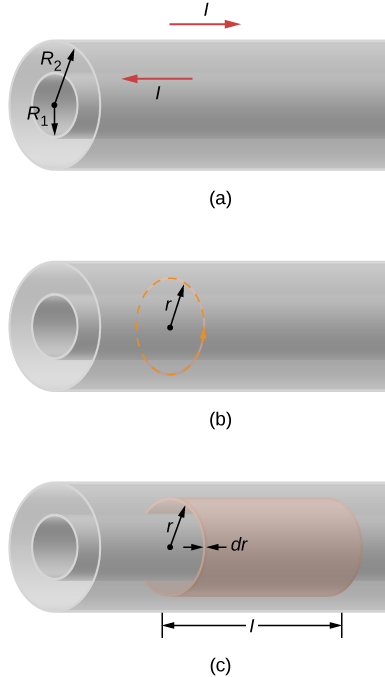 or decrease the inner radius

. In the limit as the two radii become equal, the inductance goes to zero. In this limit, there is no coaxial cable. Also, the magnetic energy per unit length from part (a) is proportional to the square of the current.

Check Your Understanding How much energy is stored in the inductor of (Figure) after the current reaches its maximum value?

has units of energy.

At the instant a current of 0.20 A is flowing through a coil of wire, the energy stored in its magnetic field is

What is the self-inductance of the coil?

Suppose that a rectangular toroid has 2000 windings and a self-inductance of 0.040 H. If

, what is the current flowing through a rectangular toroid when the energy in its magnetic field is

Solenoid A is tightly wound while solenoid B has windings that are evenly spaced with a gap equal to the diameter of the wire. The solenoids are otherwise identical. Determine the ratio of the energies stored per unit length of these solenoids when the same current flows through each.

could be melted by the energy stored in the magnetic field of the inductor? (Hint: Use the value

A coil with a self-inductance of 3.0 H and a resistance of

A current of 1.2 A is flowing in a coaxial cable whose outer radius is five times its inner radius. What is the magnetic field energy stored in a 3.0-m length of the cable?