The second law of thermodynamics is best expressed in terms of a change in the thermodynamic variable known as entropy, which is represented by the symbol S. Entropy, like internal energy, is a state function. This means that when a system makes a transition from one state into another, the change in entropy

is independent of path and depends only on the thermodynamic variables of the two states.

for a system undergoing a reversible process at a constant temperature. In this case, the change in entropy of the system is given by

where Q is the heat exchanged by the system kept at a temperature T (in kelvin). If the system absorbs heat—that is, with

—the entropy of the system increases. As an example, suppose a gas is kept at a constant temperature of 300 K while it absorbs 10 J of heat in a reversible process. Then from (Figure), the entropy change of the gas is

, we have the entropy change of the system given by

until it completely melts into water at the same temperature. What is the entropy change of the ice?

Strategy Because the process is slow, we can approximate it as a reversible process. The temperature is a constant, and we can therefore use (Figure) in the calculation.

Solution The ice is melted by the addition of heat:

In this reversible process, the temperature of the ice-water mixture is fixed at

, the entropy change of the ice is

when it melts to water at

Significance During a phase change, the temperature is constant, allowing us to use (Figure) to solve this problem. The same equation could also be used if we changed from a liquid to a gas phase, since the temperature does not change during that process either.

The change in entropy of a system for an arbitrary, reversible transition for which the temperature is not necessarily constant is defined by modifying

. Imagine a system making a transition from state A to B in small, discrete steps. The temperatures associated with these states are

respectively. During each step of the transition, the system exchanges heat

reversibly at a temperature

, as illustrated in (Figure). The change in entropy for each step is

We now take the limit as

, and the number of steps approaches infinity. Then, replacing the summation by an integral, we obtain

where the integral is taken between the initial state A and the final state B. This equation is valid only if the transition from A to B is reversible.

The gas expands at constant pressure as its temperature is increased in small steps through the use of a series of heat reservoirs.

As an example, let us determine the net entropy change of a reversible engine while it undergoes a single Carnot cycle. In the adiabatic steps 2 and 4 of the cycle shown in (Figure), no heat exchange takes place, so

In step 1, the engine absorbs heat

so its entropy change is

However, we know that for a Carnot engine,

represents the integral over a closed reversible path.

We can use (Figure) to show that the entropy change of a system undergoing a reversible process between two given states is path independent. An arbitrary, closed path for a reversible cycle that passes through the states A and B is shown in (Figure). From (Figure),

Since the process is reversible,

The closed loop passing through states A and B represents a reversible cycle. 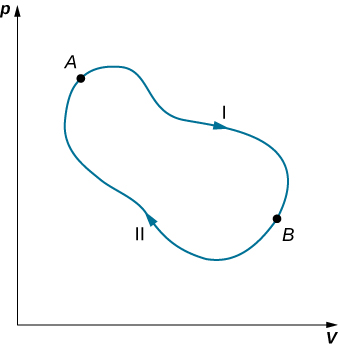 where S is the total entropy of the closed system or the entire universe, and the equal sign is for a reversible process. The fact is the entropy statement of the second law of thermodynamics:

The entropy of a closed system and the entire universe never decreases.

We can show that this statement is consistent with the Kelvin statement, the Clausius statement, and the Carnot principle.

Strategy The process is clearly stated as an irreversible process; therefore, we cannot simply calculate the entropy change from the actual process. However, because entropy of a system is a function of state, we can imagine a reversible process that starts from the same initial state and ends at the given final state. Then, the entropy change of the system is given by (Figure),

Solution To replace this rapid cooling with a process that proceeds reversibly, we imagine that the hot object is put into thermal contact with successively cooler heat reservoirs whose temperatures range from

Throughout the substitute transition, the object loses infinitesimal amounts of heat dQ, so we have

From the definition of heat capacity, an infinitesimal exchange dQ for the object is related to its temperature change dT by

Substituting this dQ into the expression for

, we obtain the entropy change of the object as it is cooled at constant pressure from

In other words, the object has lost some entropy. But if we count whatever is used to remove the heat from the object, we would still end up with

because the process is irreversible.

Stirling Engine The steps of a reversible Stirling engine are as follows. For this problem, we will use 0.0010 mol of a monatomic gas that starts at a temperature of

and a volume of

, which will be called point A. Then it goes through the following steps:

(a) Draw the pV diagram for the Stirling engine with proper labels.

(b) Fill in the following table.

(c) How does the efficiency of the Stirling engine compare to the Carnot engine working within the same two heat reservoirs?

Strategy Using the ideal gas law, calculate the pressure at each point so that they can be labeled on the pV diagram. Isothermal work is calculated using

and an isochoric process has no work done. The heat flow is calculated from the first law of thermodynamics,

for monatomic gasses. Isothermal steps have a change in entropy of Q/T, whereas isochoric steps have

The efficiency of a heat engine is calculated by using

If this were a Carnot engine operating between the same heat reservoirs, its efficiency would be

Therefore, the Carnot engine would have a greater efficiency than the Stirling engine.

Significance In the early days of steam engines, accidents would occur due to the high pressure of the steam in the boiler. Robert Stirling developed an engine in 1816 that did not use steam and therefore was safer. The Stirling engine was commonly used in the nineteenth century, but developments in steam and internal combustion engines have made it difficult to broaden the use of the Stirling engine.

The Stirling engine uses compressed air as the working substance, which passes back and forth between two chambers with a porous plug, called the regenerator, which is made of material that does not conduct heat as well. In two of the steps, pistons in the two chambers move in phase.

Does the entropy increase for a Carnot engine for each cycle?

Is it possible for a system to have an entropy change if it neither absorbs nor emits heat during a reversible transition? What happens if the process is irreversible?

Entropy will not change if it is a reversible transition but will change if the process is irreversible.

Two hundred joules of heat are removed from a heat reservoir at a temperature of 200 K. What is the entropy change of the reservoir?

In an isothermal reversible expansion at

, an ideal gas does 20 J of work. What is the entropy change of the gas?

An ideal gas at 300 K is compressed isothermally to one-fifth its original volume. Determine the entropy change per mole of the gas.

What is the entropy change of 10 g of steam at

when it condenses to water at the same temperature?

For the Carnot cycle of (Figure), what is the entropy change of the hot reservoir, the cold reservoir, and the universe?

A 5.0-kg piece of lead at a temperature of

is placed in a lake whose temperature is

. Determine the entropy change of (a) the lead piece, (b) the lake, and (c) the universe.

One mole of an ideal gas doubles its volume in a reversible isothermal expansion. (a) What is the change in entropy of the gas? (b) If 1500 J of heat are added in this process, what is the temperature of the gas?

One mole of an ideal monatomic gas is confined to a rigid container. When heat is added reversibly to the gas, its temperature changes from

(a) How much heat is added? (b) What is the change in entropy of the gas?

is dropped into a shallow lake also at

from a height of

. What is the resulting change in entropy of the universe? (b) If the temperature of the rock is

when it is dropped, what is the change of entropy of the universe? Assume that air friction is negligible (not a good assumption) and that

is the specific heat of the rock.