73 Force and Torque on a Current Loop

Motors are the most common application of magnetic force on current-carrying wires. Motors contain loops of wire in a magnetic field. When current is passed through the loops, the magnetic field exerts torque on the loops, which rotates a shaft. Electrical energy is converted into mechanical work in the process. Once the loop’s surface area is aligned with the magnetic field, the direction of current is reversed, so there is a continual torque on the loop ((Figure)). This reversal of the current is done with commutators and brushes. The commutator is set to reverse the current flow at set points to keep continual motion in the motor. A basic commutator has three contact areas to avoid and dead spots where the loop would have zero instantaneous torque at that point. The brushes press against the commutator, creating electrical contact between parts of the commutator during the spinning motion.

A simplified version of a dc electric motor. (a) The rectangular wire loop is placed in a magnetic field. The forces on the wires closest to the magnetic poles (N and S) are opposite in direction as determined by the right-hand rule-1. Therefore, the loop has a net torque and rotates to the position shown in (b). (b) The brushes now touch the commutator segments so that no current flows through the loop. No torque acts on the loop, but the loop continues to spin from the initial velocity given to it in part (a). By the time the loop flips over, current flows through the wires again but now in the opposite direction, and the process repeats as in part (a). This causes continual rotation of the loop. 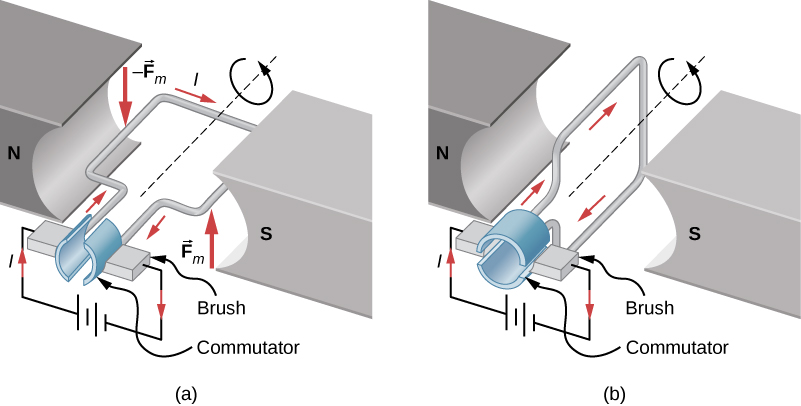 To find the net force on the loop, we have to apply this equation to each of the four sides. The force on side 1 is

where the direction has been determined with the RHR-1. The current in side 3 flows in the opposite direction to that of side 1, so

The currents in sides 2 and 4 are perpendicular to

and the forces on these sides are

We can now find the net force on the loop:

has been obtained for a rectangular loop, it is far more general and holds for current-carrying loops of arbitrary shapes; that is, there is no net force on a current loop in a uniform magnetic field.

(a) A rectangular current loop in a uniform magnetic field is subjected to a net torque but not a net force. (b) A side view of the coil. 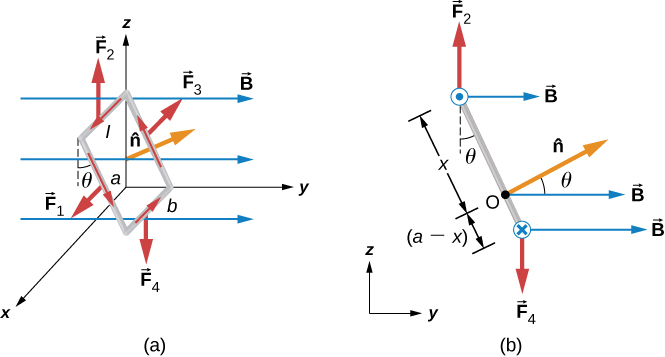 To find the net torque on the current loop shown in (Figure), we first consider

Since they have the same line of action and are equal and opposite, the sum of their torques about any axis is zero (see Fixed-Axis Rotation). Thus, if there is any torque on the loop, it must be furnished by

Let’s calculate the torques around the axis that passes through point O of (Figure) (a side view of the coil) and is perpendicular to the plane of the page. The point O is a distance x from side 2 and a distance

from side 4 of the loop. The moment arms of

respectively, so the net torque on the loop is

is the area of the loop.

Actually, the magnetic dipole moment is a vector that is defined as

is a unit vector directed perpendicular to the plane of the loop (see (Figure)). The direction of

is obtained with the RHR-2—if you curl the fingers of your right hand in the direction of current flow in the loop, then your thumb points along

If the loop contains N turns of wire, then its magnetic dipole moment is given by

In terms of the magnetic dipole moment, the torque on a current loop due to a uniform magnetic field can be written simply as

This equation holds for a current loop in a two-dimensional plane of arbitrary shape.

Using a calculation analogous to that found in Capacitance for an electric dipole, the potential energy of a magnetic dipole is

Forces and Torques on Current-Carrying Loops A circular current loop of radius 2.0 cm carries a current of 2.0 mA. (a) What is the magnitude of its magnetic dipole moment? (b) If the dipole is oriented at 30 degrees to a uniform magnetic field of magnitude 0.50 T, what is the magnitude of the torque it experiences and what is its potential energy?

In what orientation would a magnetic dipole have to be to produce (a) a maximum torque in a magnetic field? (b) A maximum energy of the dipole?

a. aligned or anti-aligned; b. perpendicular

(a) By how many percent is the torque of a motor decreased if its permanent magnets lose 5.0% of their strength? (b) How many percent would the current need to be increased to return the torque to original values?

Since the equation for torque on a current-carrying loop is τ = NIAB sin θ, the units of N ⋅ m must equal units of A ⋅ m2 T. Verify this.

A proton has a magnetic field due to its spin. The field is similar to that created by a circular current loop

in radius with a current of

Find the maximum torque on a proton in a 2.50-T field. (This is a significant torque on a small particle.)

(a) A 200-turn circular loop of radius 50.0 cm is vertical, with its axis on an east-west line. A current of 100 A circulates clockwise in the loop when viewed from the east. Earth’s field here is due north, parallel to the ground, with a strength of

What are the direction and magnitude of the torque on the loop? (b) Does this device have any practical applications as a motor? 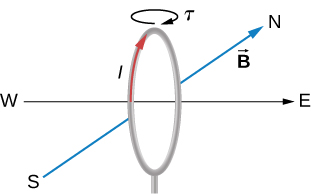 Repeat the previous problem, but with the loop lying flat on the ground with its current circulating counterclockwise (when viewed from above) in a location where Earth’s field is north, but at an angle 45.0° below the horizontal and with a strength of 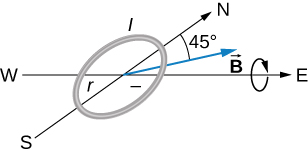 motor (dc)
loop of wire in a magnetic field; when current is passed through the loops, the magnetic field exerts torque on the loops, which rotates a shaft; electrical energy is converted into mechanical work in the process