The fact that emfs are induced in circuits implies that work is being done on the conduction electrons in the wires. What can possibly be the source of this work? We know that it’s neither a battery nor a magnetic field, for a battery does not have to be present in a circuit where current is induced, and magnetic fields never do work on moving charges. The answer is that the source of the work is an electric field

that is induced in the wires. The work done by

in moving a unit charge completely around a circuit is the induced emf ε; that is,

represents the line integral around the circuit. Faraday’s law can be written in terms of the induced electric field as

Our results can be summarized by combining these equations:

Induced Electric Field in a Circular Coil What is the induced electric field in the circular coil of (Figure) (and (Figure)) at the three times indicated?

Solution The induced electric field in the coil is constant in magnitude over the cylindrical surface, similar to how Ampere’s law problems with cylinders are solved. Since

is tangent to the coil,

When combined with (Figure), this gives

circulates in the same direction around the coil. The values of E are

Significance When the magnetic flux through a circuit changes, a nonconservative electric field is induced, which drives current through the circuit. But what happens if

in free space where there isn’t a conducting path? The answer is that this case can be treated as if a conducting path were present; that is, nonconservative electric fields are induced wherever

whether or not there is a conducting path present.

These nonconservative electric fields always satisfy (Figure). For example, if the circular coil of (Figure) were removed, an electric field in free space at

etc. The existence of induced electric fields is certainly not restricted to wires in circuits.

Electric Field Induced by the Changing Magnetic Field of a Solenoid Part (a) of (Figure) shows a long solenoid with radius R and n turns per unit length; its current decreases with time according to

[see part (b) of (Figure)]. (c) What is the direction of the induced field at both locations? Assume that the infinite-solenoid approximation is valid throughout the regions of interest. 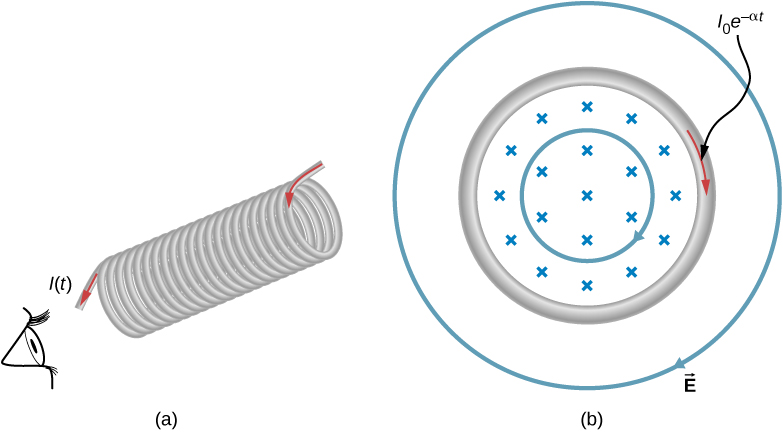 Significance In part (b), note that

increases with r inside and decreases as 1/r outside the solenoid, as shown in (Figure).

The electric field vs. distance r. When

the electric field rises linearly, whereas when

the electric field falls of proportional to 1/r. 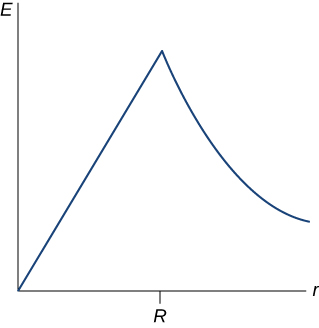 Check Your Understanding Suppose that the coil of (Figure) is a square rather than circular. Can (Figure) be used to calculate (a) the induced emf and (b) the induced electric field?

a. yes; b. Yes; however there is a lack of symmetry between the electric field and coil, making

a more complicated relationship that can’t be simplified as shown in the example.

Check Your Understanding The magnetic field shown below is confined to the cylindrical region shown and is changing with time. Identify those paths for which 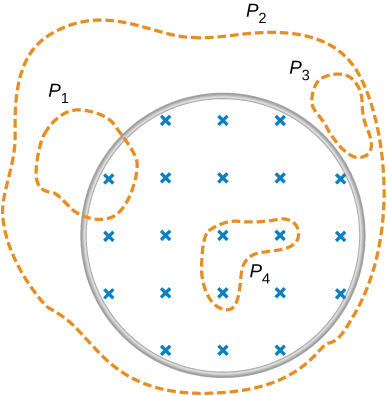 Check Your Understanding A long solenoid of cross-sectional area

is wound with 25 turns of wire per centimeter. It is placed in the middle of a closely wrapped coil of 10 turns and radius 25 cm, as shown below. (a) What is the emf induced in the coil when the current through the solenoid is decreasing at a rate

(b) What is the electric field induced in the coil? 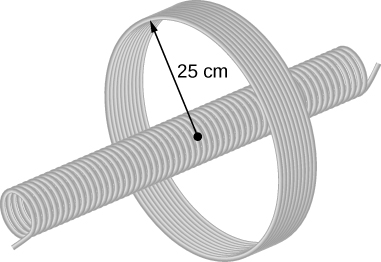 Is the work required to accelerate a rod from rest to a speed v in a magnetic field greater than the final kinetic energy of the rod? Why?

The work is greater than the kinetic energy because it takes energy to counteract the induced emf.

The copper sheet shown below is partially in a magnetic field. When it is pulled to the right, a resisting force pulls it to the left. Explain. What happen if the sheet is pushed to the left? 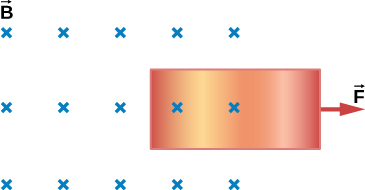 The magnetic field through a circular loop of radius 10.0 cm varies with time as shown in the accompanying figure. The field is perpendicular to the loop. Assuming cylindrical symmetry with respect to the central axis of the loop, plot the induced electric field in the loop as a function of time. 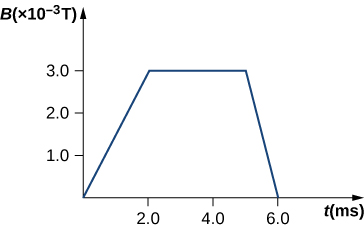 The current I through a long solenoid with n turns per meter and radius R is changing with time as given by dI/dt. Calculate the induced electric field as a function of distance r from the central axis of the solenoid.

Over a region of radius R, there is a spatially uniform magnetic field

after which it decreases at a constant rate to zero in 30 s. (a) What is the electric field in the regions where

during that 30-s interval? (b) Assume that

, a proton enters the magnetic field at A, moving a velocity

as shown. What are the electric and magnetic forces on the proton at that instant? 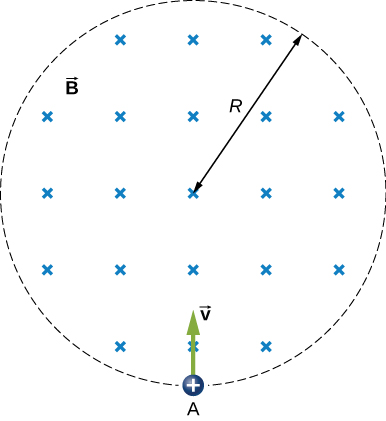 The magnetic field at all points within the cylindrical region whose cross-section is indicated in the accompanying figure starts at 1.0 T and decreases uniformly to zero in 20 s. What is the electric field (both magnitude and direction) as a function of r, the distance from the geometric center of the region? 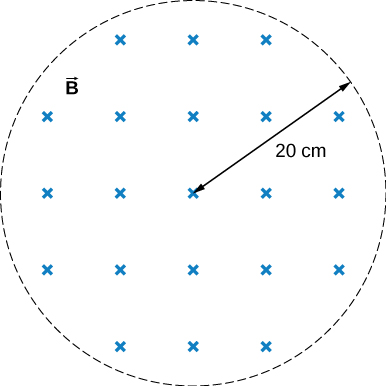 The current in a long solenoid with 20 turns per centimeter of radius 3 cm is varied with time at a rate of 2 A/s. A circular loop of wire of radius 5 cm and resistance

surrounds the solenoid. Find the electrical current induced in the loop.

The current in a long solenoid of radius 3 cm and 20 turns/cm is varied with time at a rate of 2 A/s. Find the electric field at a distance of 4 cm from the center of the solenoid.