The direction in which the induced emf drives current around a wire loop can be found through the negative sign. However, it is usually easier to determine this direction with Lenz’s law, named in honor of its discoverer, Heinrich Lenz (1804–1865). (Faraday also discovered this law, independently of Lenz.) We state Lenz’s law as follows:

The direction of the induced emf drives current around a wire loop to always oppose the change in magnetic flux that causes the emf.

Lenz’s law can also be considered in terms of conservation of energy. If pushing a magnet into a coil causes current, the energy in that current must have come from somewhere. If the induced current causes a magnetic field opposing the increase in field of the magnet we pushed in, then the situation is clear. We pushed a magnet against a field and did work on the system, and that showed up as current. If it were not the case that the induced field opposes the change in the flux, the magnet would be pulled in produce a current without anything having done work. Electric potential energy would have been created, violating the conservation of energy.

To determine an induced emf

, you first calculate the magnetic flux

Finally, you can apply Lenz’s law to determine the sense of

. This will be developed through examples that illustrate the following problem-solving strategy.

To use Lenz’s law to determine the directions of induced magnetic fields, currents, and emfs:

Let’s apply Lenz’s law to the system of (Figure)(a). We designate the “front” of the closed conducting loop as the region containing the approaching bar magnet, and the “back” of the loop as the other region. As the north pole of the magnet moves toward the loop, the flux through the loop due to the field of the magnet increases because the strength of field lines directed from the front to the back of the loop is increasing. A current is therefore induced in the loop. By Lenz’s law, the direction of the induced current must be such that its own magnetic field is directed in a way to oppose the changing flux caused by the field of the approaching magnet. Hence, the induced current circulates so that its magnetic field lines through the loop are directed from the back to the front of the loop. By RHR-2, place your thumb pointing against the magnetic field lines, which is toward the bar magnet. Your fingers wrap in a counterclockwise direction as viewed from the bar magnet. Alternatively, we can determine the direction of the induced current by treating the current loop as an electromagnet that opposes the approach of the north pole of the bar magnet. This occurs when the induced current flows as shown, for then the face of the loop nearer the approaching magnet is also a north pole.

Part (b) of the figure shows the south pole of a magnet moving toward a conducting loop. In this case, the flux through the loop due to the field of the magnet increases because the number of field lines directed from the back to the front of the loop is increasing. To oppose this change, a current is induced in the loop whose field lines through the loop are directed from the front to the back. Equivalently, we can say that the current flows in a direction so that the face of the loop nearer the approaching magnet is a south pole, which then repels the approaching south pole of the magnet. By RHR-2, your thumb points away from the bar magnet. Your fingers wrap in a clockwise fashion, which is the direction of the induced current.

Another example illustrating the use of Lenz’s law is shown in (Figure). When the switch is opened, the decrease in current through the solenoid causes a decrease in magnetic flux through its coils, which induces an emf in the solenoid. This emf must oppose the change (the termination of the current) causing it. Consequently, the induced emf has the polarity shown and drives in the direction of the original current. This may generate an arc across the terminals of the switch as it is opened.

Check Your Understanding Find the direction of the induced current in the wire loop shown below as the magnet enters, passes through, and leaves the loop.

Check Your Understanding Verify the directions of the induced currents in (Figure).

A Circular Coil in a Changing Magnetic Field A magnetic field

((Figure)). The field is cylindrically symmetrical with respect to the center of the coil, and its magnitude decays exponentially according to

where B is in teslas and t is in seconds. (a) Calculate the emf induced in the coil at the times

A circular coil in a decreasing magnetic field. 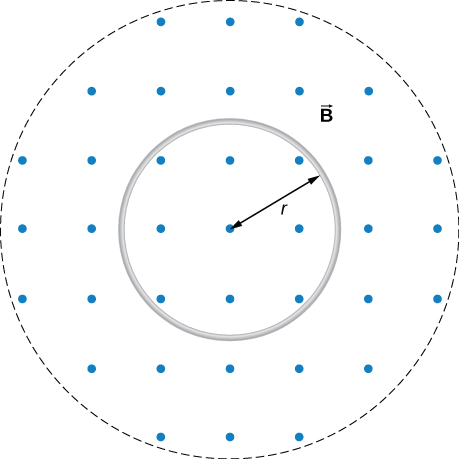 and normal to the area unit vector

Significance An emf voltage is created by a changing magnetic flux over time. If we know how the magnetic field varies with time over a constant area, we can take its time derivative to calculate the induced emf.

turns per meter is changing at a rate

(See Sources of Magnetic Fields for a discussion of solenoids.) The solenoid is 50-cm long and has a cross-sectional diameter of 3.0 cm. A small coil consisting of

closely wound turns wrapped in a circle of diameter 1.0 cm is placed in the middle of the solenoid such that the plane of the coil is perpendicular to the central axis of the solenoid. Assuming that the infinite-solenoid approximation is valid at the location of the small coil, determine the magnitude of the emf induced in the coil.

This field is producing a maximum magnetic flux through the coil as it is directed along the length of the solenoid. Therefore, the magnetic flux through the coil is the product of the solenoid’s magnetic field times the area of the coil. Faraday’s law involves a time derivative of the magnetic flux. The only quantity varying in time is the current, the rest can be pulled out of the time derivative. Lastly, we include the number of turns in the coil to determine the induced emf in the coil.

Solution Since the field of the solenoid is given by

the flux through each turn of the small coil is

where d is the diameter of the coil. Now from Faraday’s law, the magnitude of the emf induced in the coil is

Significance When the current is turned on in a vertical solenoid, as shown in (Figure), the ring has an induced emf from the solenoid’s changing magnetic flux that opposes the change. The result is that the ring is fired vertically into the air.

The jumping ring. When a current is turned on in the vertical solenoid, a current is induced in the metal ring. The stray field produced by the solenoid causes the ring to jump off the solenoid. 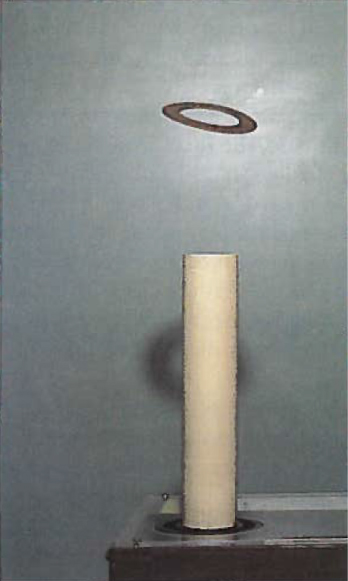 Visit this website for a demonstration of the jumping ring from MIT.

The north pole of a magnet is moved toward a copper loop, as shown below. If you are looking at the loop from above the magnet, will you say the induced current is circulating clockwise or counterclockwise? 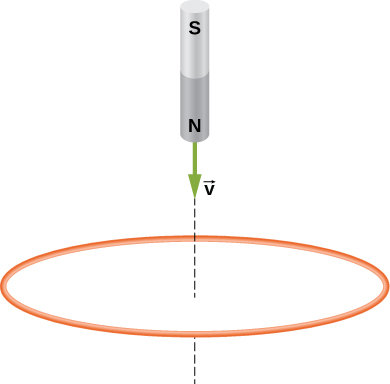 The accompanying figure shows a conducting ring at various positions as it moves through a magnetic field. What is the sense of the induced emf for each of those positions?

have the same units.

State the direction of the induced current for each case shown below, observing from the side of the magnet. 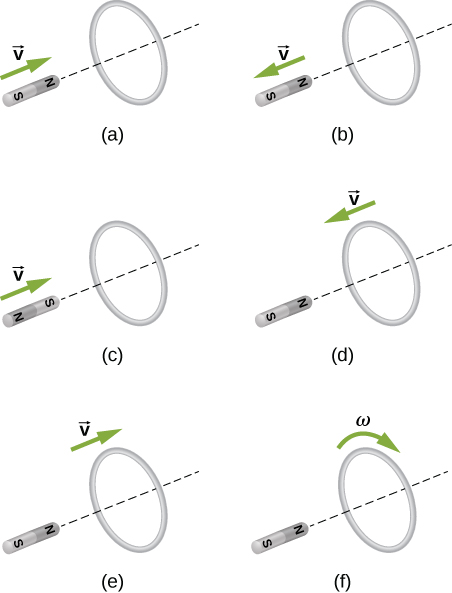 A single-turn circular loop of wire of radius 50 mm lies in a plane perpendicular to a spatially uniform magnetic field. During a 0.10-s time interval, the magnitude of the field increases uniformly from 200 to 300 mT. (a) Determine the emf induced in the loop. (b) If the magnetic field is directed out of the page, what is the direction of the current induced in the loop?

; b. CCW from the same view as the magnetic field

When a magnetic field is first turned on, the flux through a 20-turn loop varies with time according to

is in milliwebers. What are the direction and magnitude of the current through the 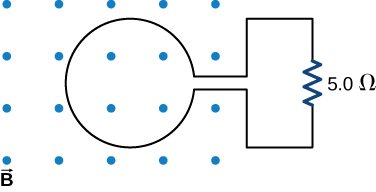 Use Lenz’s law to determine the direction of induced current in each case. 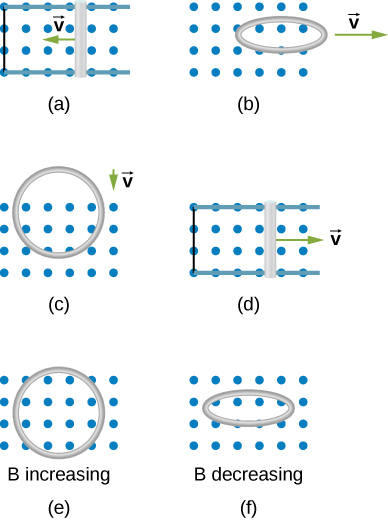 Lenz’s law
direction of an induced emf opposes the change in magnetic flux that produced it; this is the negative sign in Faraday’s law