72 Magnetic Force on a Current-Carrying Conductor

When discussing historical discoveries in magnetism, we mentioned Oersted’s finding that a wire carrying an electrical current caused a nearby compass to deflect. A connection was established that electrical currents produce magnetic fields. (This connection between electricity and magnetism is discussed in more detail in Sources of Magnetic Fields.)

A composite sketch of the magnetic circles is shown in (Figure), where the field strength is shown to decrease as you get farther from the wire by loops that are farther separated.

Electric current is an ordered movement of charge. A current-carrying wire in a magnetic field must therefore experience a force due to the field. To investigate this force, let’s consider the infinitesimal section of wire as shown in (Figure). The length and cross-sectional area of the section are dl and A, respectively, so its volume is

If the charge carriers move with drift velocity

the current I in the wire is (from Current and Resistance)

The magnetic force on any single charge carrier is

so the total magnetic force

charge carriers in the section of wire is

which allows us to rewrite this equation as

An infinitesimal section of current-carrying wire in a magnetic field.

To determine the magnetic force

on a wire of arbitrary length and shape, we must integrate (Figure) over the entire wire. If the wire section happens to be straight and B is uniform, the equation differentials become absolute quantities, giving us

This is the force on a straight, current-carrying wire in a uniform magnetic field.

Balancing the Gravitational and Magnetic Forces on a Current-Carrying Wire A wire of length 50 cm and mass 10 g is suspended in a horizontal plane by a pair of flexible leads ((Figure)). The wire is then subjected to a constant magnetic field of magnitude 0.50 T, which is directed as shown. What are the magnitude and direction of the current in the wire needed to remove the tension in the supporting leads?

(a) A wire suspended in a magnetic field. (b) The free-body diagram for the wire. 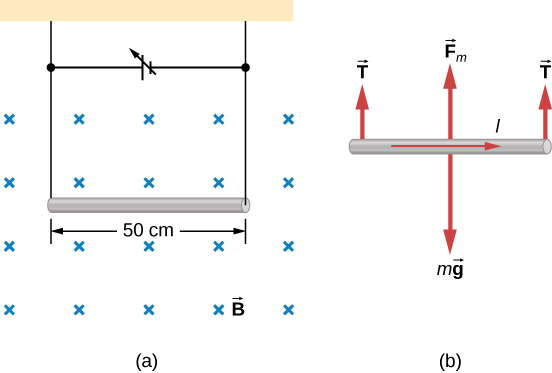 Strategy From the free-body diagram in the figure, the tensions in the supporting leads go to zero when the gravitational and magnetic forces balance each other. Using the RHR-1, we find that the magnetic force points up. We can then determine the current I by equating the two forces.

Solution Equate the two forces of weight and magnetic force on the wire:

Significance This large magnetic field creates a significant force on a length of wire to counteract the weight of the wire.

For part a, since the current and magnetic field are perpendicular in this problem, we can simplify the formula to give us the magnitude and find the direction through the RHR-1. The angle θ is 90 degrees, which means

Also, the length can be divided over to the left-hand side to find the force per unit length. For part b, the current times length is written in unit vector notation, as well as the magnetic field. After the cross product is taken, the directionality is evident by the resulting unit vector.

Significance This large magnetic field creates a significant force on a small length of wire. As the angle of the magnetic field becomes more closely aligned to the current in the wire, there is less of a force on it, as seen from comparing parts a and b.

a. bends upward; b. bends downward

A loop of wire carrying a current in a magnetic field. 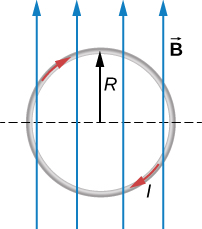 Solution A differential force on an arbitrary piece of wire located on the upper ring is:

is the angle between the magnetic field direction (+y) and the segment of wire. A differential segment is located at the same radius, so using an arc-length formula, we have:

In order to find the force on a segment, we integrate over the upper half of the circle, from 0 to

The lower half of the loop is integrated from

to zero, giving us:

The net force is the sum of these forces, which is zero.

Significance The total force on any closed loop in a uniform magnetic field is zero. Even though each piece of the loop has a force acting on it, the net force on the system is zero. (Note that there is a net torque on the loop, which we consider in the next section.)

Describe the error that results from accidently using your left rather than your right hand when determining the direction of a magnetic force.

Why can a nearby magnet distort a cathode ray tube television picture?

A magnetic field exerts a force on the moving electrons in a current carrying wire. What exerts the force on a wire?

A force on a wire is exerted by an external magnetic field created by a wire or another magnet.

There are regions where the magnetic field of earth is almost perpendicular to the surface of Earth. What difficulty does this cause in the use of a compass?

What is the direction of the magnetic force on the current in each of the six cases?

What is the direction of a current that experiences the magnetic force shown in each of the three cases, assuming the current runs perpendicular to 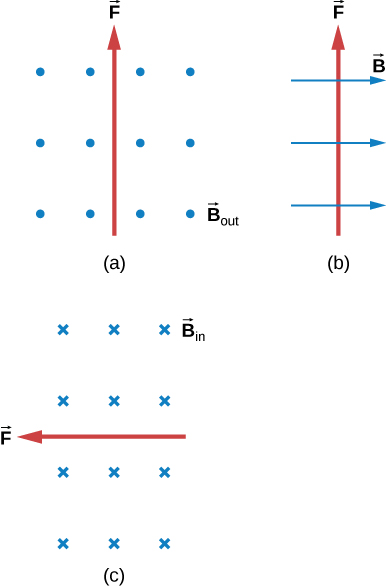 What is the direction of the magnetic field that produces the magnetic force shown on the currents in each of the three cases, assuming

is perpendicular to I?

(a) What is the force per meter on a lightning bolt at the equator that carries 20,000 A perpendicular to Earth’s

field? (b) What is the direction of the force if the current is straight up and Earth’s field direction is due north, parallel to the ground?

field. What is the force on a 100-m section of this line? (b) Discuss practical concerns this presents, if any.

a. 2.50 N; b. This means that the light-rail power lines must be attached in order not to be moved by the force caused by Earth’s magnetic field.

A wire carrying a 30.0-A current passes between the poles of a strong magnet that is perpendicular to its field and experiences a 2.16-N force on the 4.00 cm of wire in the field. What is the average field strength?