James Clerk Maxwell (1831–1879) was one of the major contributors to physics in the nineteenth century ((Figure)). Although he died young, he made major contributions to the development of the kinetic theory of gases, to the understanding of color vision, and to the nature of Saturn’s rings. He is probably best known for having combined existing knowledge of the laws of electricity and of magnetism with insights of his own into a complete overarching electromagnetic theory, represented by Maxwell’s equations.

James Clerk Maxwell, a nineteenth-century physicist, developed a theory that explained the relationship between electricity and magnetism, and correctly predicted that visible light consists of electromagnetic waves. 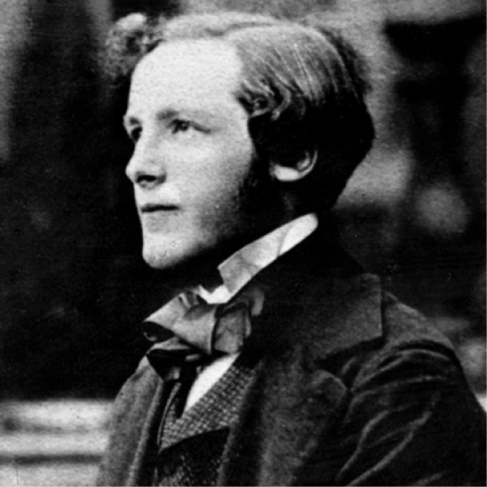 Maxwell’s Correction to the Laws of Electricity and Magnetism

The four basic laws of electricity and magnetism had been discovered experimentally through the work of physicists such as Oersted, Coulomb, Gauss, and Faraday. Maxwell discovered logical inconsistencies in these earlier results and identified the incompleteness of Ampère’s law as their cause.

Recall that according to Ampère’s law, the integral of the magnetic field around a closed loop C is proportional to the current I passing through any surface whose boundary is loop C itself:

There are infinitely many surfaces that can be attached to any loop, and Ampère’s law stated in (Figure) is independent of the choice of surface.

Consider the set-up in (Figure). A source of emf is abruptly connected across a parallel-plate capacitor so that a time-dependent current I develops in the wire. Suppose we apply Ampère’s law to loop C shown at a time before the capacitor is fully charged, so that

gives a nonzero value for the enclosed current I, whereas surface

gives zero for the enclosed current because no current passes through it:

Clearly, Ampère’s law in its usual form does not work here. This may not be surprising, because Ampère’s law as applied in earlier chapters required a steady current, whereas the current in this experiment is changing with time and is not steady at all.

The currents through surface

are unequal, despite having the same boundary loop C. 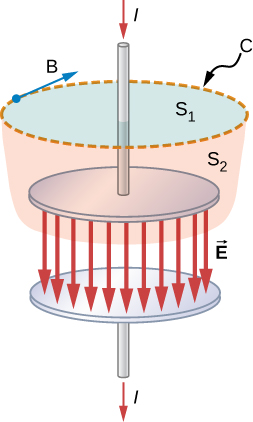 How can Ampère’s law be modified so that it works in all situations? Maxwell suggested including an additional contribution, called the displacement current

, to the real current I,

where the displacement current is defined to be

is the permittivity of free space and

is the electric flux, defined as

and is independent of the surface S through which the current I is measured.

in (Figure) is chosen. The electric field

corresponding to the flux

in (Figure) is between the capacitor plates. Therefore, the

field and the displacement current through the surface

are both zero, and (Figure) takes the form

We must now show that for surface

through which no actual current flows, the displacement current leads to the same value

for the right side of the Ampère’s law equation. For surface

alone. But the two surfaces

form a closed surface in (Figure) and can be used in Gauss’s law. Because the electric field is zero on

, the flux contribution through

is zero. This gives us

Therefore, we can replace the integral over

in (Figure) with the closed Gaussian surface

and apply Gauss’s law to obtain

where the right-hand side results from the displacement current, as it is for the surface

where the contribution comes from the actual flow of electric charge.

Displacement current in a charging capacitor A parallel-plate capacitor with capacitance C whose plates have area A and separation distance d is connected to a resistor R and a battery of voltage V. The current starts to flow at

. (a) Find the displacement current between the capacitor plates at time t. (b) From the properties of the capacitor, find the corresponding real current

, and compare the answer to the expected current in the wires of the corresponding RC circuit.

StrategyWe can use the equations from the analysis of an RC circuit (Alternating-Current Circuits) plus Maxwell’s version of Ampère’s law.

With the correction for the displacement current, Maxwell’s equations take the form

Once the fields have been calculated using these four equations, the Lorentz force equation

. The Lorentz force equation combines the force of the electric field and of the magnetic field on the moving charge. The magnetic and electric forces have been examined in earlier modules. These four Maxwell’s equations are, respectively,

Later application of Einstein’s theory of relativity to Maxwell’s complete and symmetric theory showed that electric and magnetic forces are not separate but are different manifestations of the same thing—the electromagnetic force. The electromagnetic force and weak nuclear force are similarly unified as the electroweak force. This unification of forces has been one motivation for attempts to unify all of the four basic forces in nature—the gravitational, electrical, strong, and weak nuclear forces (see Particle Physics and Cosmology).

The Mechanism of Electromagnetic Wave Propagation

To see how the symmetry introduced by Maxwell accounts for the existence of combined electric and magnetic waves that propagate through space, imagine a time-varying magnetic field

produced by the high-frequency alternating current seen in (Figure). We represent

in the diagram by one of its field lines. From Faraday’s law, the changing magnetic field through a surface induces a time-varying electric field

is shown. In turn, the changing electric field

according to the modified Ampère’s law. This changing field induces

and so on. We then have a self-continuing process that leads to the creation of time-varying electric and magnetic fields in regions farther and farther away from O. This process may be visualized as the propagation of an electromagnetic wave through space.

Prior to Maxwell’s work, experiments had already indicated that light was a wave phenomenon, although the nature of the waves was yet unknown. In 1801, Thomas Young (1773–1829) showed that when a light beam was separated by two narrow slits and then recombined, a pattern made up of bright and dark fringes was formed on a screen. Young explained this behavior by assuming that light was composed of waves that added constructively at some points and destructively at others (see Interference). Subsequently, Jean Foucault (1819–1868), with measurements of the speed of light in various media, and Augustin Fresnel (1788–1827), with detailed experiments involving interference and diffraction of light, provided further conclusive evidence that light was a wave. So, light was known to be a wave, and Maxwell had predicted the existence of electromagnetic waves that traveled at the speed of light. The conclusion seemed inescapable: Light must be a form of electromagnetic radiation. But Maxwell’s theory showed that other wavelengths and frequencies than those of light were possible for electromagnetic waves. He showed that electromagnetic radiation with the same fundamental properties as visible light should exist at any frequency. It remained for others to test, and confirm, this prediction.

Check Your Understanding When the emf across a capacitor is turned on and the capacitor is allowed to charge, when does the magnetic field induced by the displacement current have the greatest magnitude?

It is greatest immediately after the current is switched on. The displacement current and the magnetic field from it are proportional to the rate of change of electric field between the plates, which is greatest when the plates first begin to charge.

and connected it to a loop of wire, as shown in (Figure). High voltages induced across the gap in the loop produced sparks that were visible evidence of the current in the circuit and helped generate electromagnetic waves.

Across the laboratory, Hertz placed another loop attached to another RLC circuit, which could be tuned (as the dial on a radio) to the same resonant frequency as the first and could thus be made to receive electromagnetic waves. This loop also had a gap across which sparks were generated, giving solid evidence that electromagnetic waves had been received.

The apparatus used by Hertz in 1887 to generate and detect electromagnetic waves.

Hertz also studied the reflection, refraction, and interference patterns of the electromagnetic waves he generated, confirming their wave character. He was able to determine the wavelengths from the interference patterns, and knowing their frequencies, he could calculate the propagation speed using the equation

, where v is the speed of a wave, f is its frequency, and

is its wavelength. Hertz was thus able to prove that electromagnetic waves travel at the speed of light. The SI unit for frequency, the hertz (

Check Your Understanding Could a purely electric field propagate as a wave through a vacuum without a magnetic field? Justify your answer.

No. The changing electric field according to the modified version of Ampère’s law would necessarily induce a changing magnetic field.

Explain how the displacement current maintains the continuity of current in a circuit containing a capacitor.

Describe the field lines of the induced magnetic field along the edge of the imaginary horizontal cylinder shown below if the cylinder is in a spatially uniform electric field that is horizontal, pointing to the right, and increasing in magnitude. 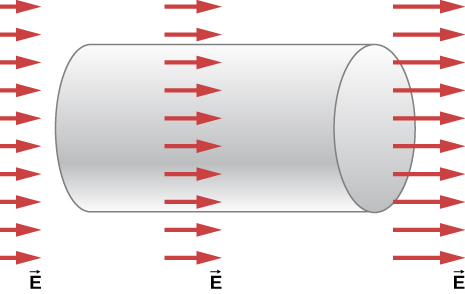 Show that the magnetic field at a distance r from the axis of two circular parallel plates, produced by placing charge Q(t) on the plates is

Express the displacement current in a capacitor in terms of the capacitance and the rate of change of the voltage across the capacitor.

is maintained across a parallel-plate capacitor with capacitance C consisting of two circular parallel plates. A thin wire with resistance R connects the centers of the two plates, allowing charge to leak between plates while they are charging.
(a) Obtain expressions for the leakage current

in the thin wire. Use these results to obtain an expression for the current

with the sum of the displacement current

between the plates, and explain why the relationship you observe would be expected.

; which is the sum of

consistent with how the displacement current maintaining the continuity of current.

Suppose the parallel-plate capacitor shown below is accumulating charge at a rate of 0.010 C/s. What is the induced magnetic field at a distance of 10 cm from the capacitator? 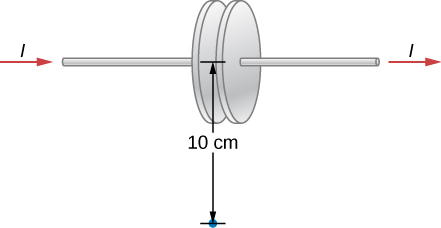 What is the displacement current between the plates if the separation of the plates is 1.00 cm and they have an area of

A parallel-plate capacitor has a plate area of

and a separation of 0.0100 m. What must be must be the angular frequency

to produce a maximum displacement induced current of 1.00 A between the plates?

The voltage across a parallel-plate capacitor with area

, where t is in seconds. Find the displacement current between the plates.

, where a is a constant. Find the displacement current between the plates.

displacement current
extra term in Maxwell’s equations that is analogous to a real current but accounts for a changing electric field producing a magnetic field, even when the real current is present