71 Motion of a Charged Particle in a Magnetic Field

’s—like the tails of arrows). The magnetic force is perpendicular to the velocity, so velocity changes in direction but not magnitude. The result is uniform circular motion. (Note that because the charge is negative, the force is opposite in direction to the prediction of the right-hand rule.) 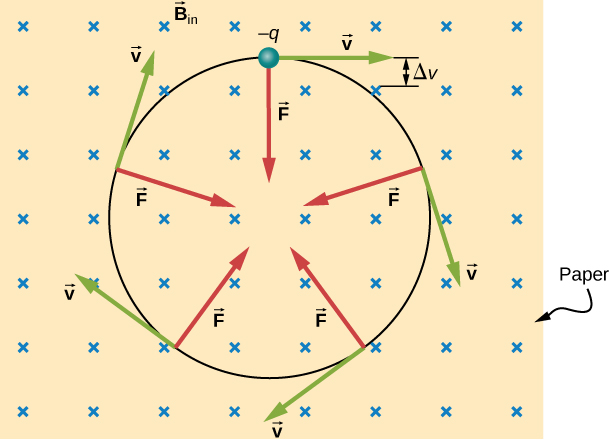 In this situation, the magnetic force supplies the centripetal force

Because the magnetic force F supplies the centripetal force

Here, r is the radius of curvature of the path of a charged particle with mass m and charge q, moving at a speed v that is perpendicular to a magnetic field of strength B. The time for the charged particle to go around the circular path is defined as the period, which is the same as the distance traveled (the circumference) divided by the speed. Based on this and (Figure), we can derive the period of motion as

The result is a helical motion, as shown in the following figure.

A charged particle moving with a velocity not in the same direction as the magnetic field. The velocity component perpendicular to the magnetic field creates circular motion, whereas the component of the velocity parallel to the field moves the particle along a straight line. The pitch is the horizontal distance between two consecutive circles. The resulting motion is helical. 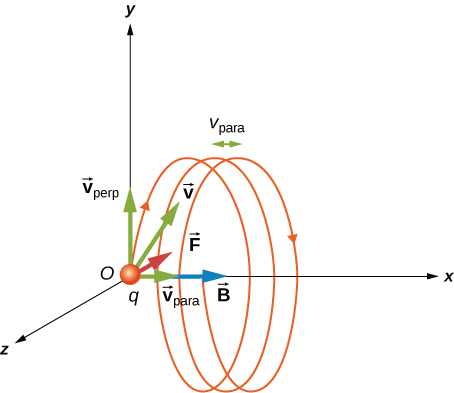 Trapped particles in magnetic fields are found in the Van Allen radiation belts around Earth, which are part of Earth’s magnetic field. These belts were discovered by James Van Allen while trying to measure the flux of cosmic rays on Earth (high-energy particles that come from outside the solar system) to see whether this was similar to the flux measured on Earth. Van Allen found that due to the contribution of particles trapped in Earth’s magnetic field, the flux was much higher on Earth than in outer space. Aurorae, like the famous aurora borealis (northern lights) in the Northern Hemisphere ((Figure)), are beautiful displays of light emitted as ions recombine with electrons entering the atmosphere as they spiral along magnetic field lines. (The ions are primarily oxygen and nitrogen atoms that are initially ionized by collisions with energetic particles in Earth’s atmosphere.) Aurorae have also been observed on other planets, such as Jupiter and Saturn.

(a) The Van Allen radiation belts around Earth trap ions produced by cosmic rays striking Earth’s atmosphere. (b) The magnificent spectacle of the aurora borealis, or northern lights, glows in the northern sky above Bear Lake near Eielson Air Force Base, Alaska. Shaped by Earth’s magnetic field, this light is produced by glowing molecules and ions of oxygen and nitrogen. (credit b: modification of work by USAF Senior Airman Joshua Strang)

Beam Deflector A research group is investigating short-lived radioactive isotopes. They need to design a way to transport alpha-particles (helium nuclei) from where they are made to a place where they will collide with another material to form an isotope. The beam of alpha-particles 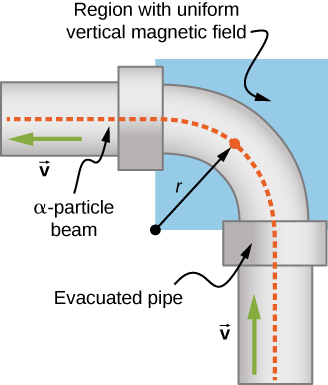 Significance This time may be quick enough to get to the material we would like to bombard, depending on how short-lived the radioactive isotope is and continues to emit alpha-particles. If we could increase the magnetic field applied in the region, this would shorten the time even more. The path the particles need to take could be shortened, but this may not be economical given the experimental setup.

Check Your Understanding A uniform magnetic field of magnitude 1.5 T is directed horizontally from west to east. (a) What is the magnetic force on a proton at the instant when it is moving vertically downward in the field with a speed of

(b) Compare this force with the weight w of a proton.

toward the south; b.

with a speed of

At what angle must the magnetic field be from the velocity so that the pitch of the resulting helical motion is equal to the radius of the helix?

Strategy The pitch of the motion relates to the parallel velocity times the period of the circular motion, whereas the radius relates to the perpendicular velocity component. After setting the radius and the pitch equal to each other, solve for the angle between the magnetic field and velocity or

Significance If this angle were

only parallel velocity would occur and the helix would not form, because there would be no circular motion in the perpendicular plane. If this angle were

only circular motion would occur and there would be no movement of the circles perpendicular to the motion. That is what creates the helical motion.

At a given instant, an electron and a proton are moving with the same velocity in a constant magnetic field. Compare the magnetic forces on these particles. Compare their accelerations.

The magnetic field must point parallel or anti-parallel to the velocity.

If a charged particle moves in a straight line, can you conclude that there is no magnetic field present?

How could you determine which pole of an electromagnet is north and which pole is south?

A compass points toward the north pole of an electromagnet.

A cosmic-ray electron moves at

What is the radius of the circular path the electron follows?

(a) Viewers of Star Trek have heard of an antimatter drive on the Starship Enterprise. One possibility for such a futuristic energy source is to store antimatter charged particles in a vacuum chamber, circulating in a magnetic field, and then extract them as needed. Antimatter annihilates normal matter, producing pure energy. What strength magnetic field is needed to hold antiprotons, moving at

in a circular path 2.00 m in radius? Antiprotons have the same mass as protons but the opposite (negative) charge. (b) Is this field strength obtainable with today’s technology or is it a futuristic possibility?

perpendicular to a 1.20-T magnetic field, which makes it move in a circular arc with a 0.231-m radius. What positive charge is on the ion? (b) What is the ratio of this charge to the charge of an electron? (c) Discuss why the ratio found in (b) should be an integer.

An electron in a TV CRT moves with a speed of

in a direction perpendicular to Earth’s field, which has a strength of

(a) What strength electric field must be applied perpendicular to the Earth’s field to make the electron moves in a straight line? (b) If this is done between plates separated by 1.00 cm, what is the voltage applied? (Note that TVs are usually surrounded by a ferromagnetic material to shield against external magnetic fields and avoid the need for such a correction.)

(a) What voltage will accelerate electrons to a speed of

A particle of charge q and mass m is accelerated from rest through a potential difference V, after which it encounters a uniform magnetic field B. If the particle moves in a plane perpendicular to B, what is the radius of its circular orbit?