We have been discussing three electrical properties so far in this chapter: current, voltage, and resistance. It turns out that many materials exhibit a simple relationship among the values for these properties, known as Ohm’s law. Many other materials do not show this relationship, so despite being called Ohm’s law, it is not considered a law of nature, like Newton’s laws or the laws of thermodynamics. But it is very useful for calculations involving materials that do obey Ohm’s law.

This important relationship is the basis for Ohm’s law. It can be viewed as a cause-and-effect relationship, with voltage the cause and current the effect. This is an empirical law, which is to say that it is an experimentally observed phenomenon, like friction. Such a linear relationship doesn’t always occur. Any material, component, or device that obeys Ohm’s law, where the current through the device is proportional to the voltage applied, is known as an ohmic material or ohmic component. Any material or component that does not obey Ohm’s law is known as a nonohmic material or nonohmic component. 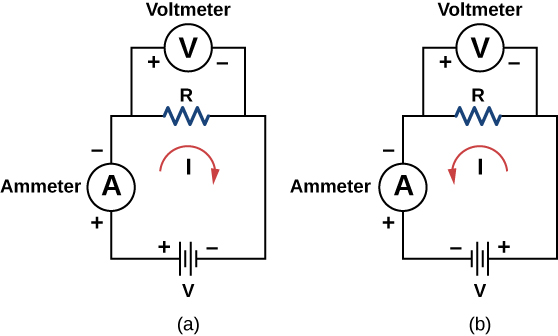 A resistor is placed in a circuit with a battery. The voltage applied varies from −10.00 V to +10.00 V, increased by 1.00-V increments. A plot shows values of the voltage versus the current typical of what a casual experimenter might find. 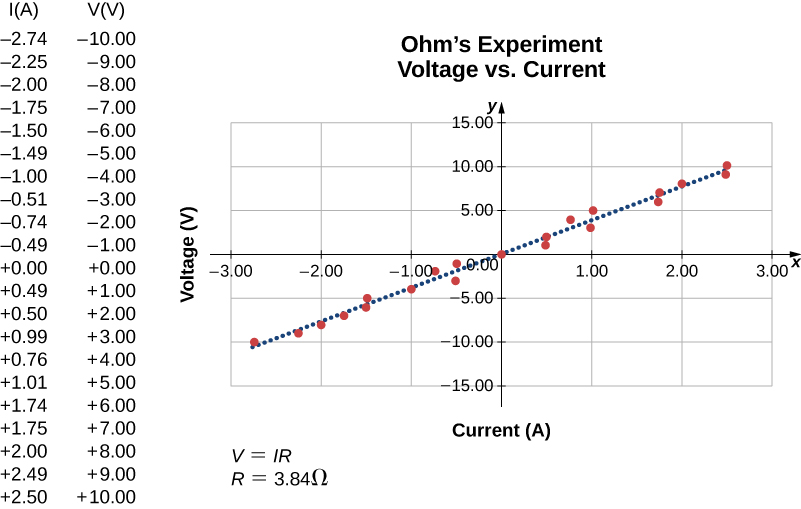 Strategy (a) The resistance can be found using Ohm’s law. Ohm’s law states that

, so the resistance can be found using

(b) First, the resistance is temperature dependent so the new resistance after the resistor has been heated can be found using

. The current can be found using Ohm’s law in the form

Significance A change in temperature of

resulted in a 2.00% change in current. This may not seem like a very great change, but changing electrical characteristics can have a strong effect on the circuits. For this reason, many electronic appliances, such as computers, contain fans to remove the heat dissipated by components in the electric circuits.

Check Your Understanding The voltage supplied to your house varies as

. If a resistor is connected across this voltage, will Ohm’s law

Yes, Ohm’s law is still valid. At every point in time the current is equal to

, so the current is also a function of time,

See how the equation form of Ohm’s law relates to a simple circuit. Adjust the voltage and resistance, and see the current change according to Ohm’s law. The sizes of the symbols in the equation change to match the circuit diagram.

Nonohmic devices do not exhibit a linear relationship between the voltage and the current. One such device is the semiconducting circuit element known as a diode. A diode is a circuit device that allows current flow in only one direction. A diagram of a simple circuit consisting of a battery, a diode, and a resistor is shown in (Figure). Although we do not cover the theory of the diode in this section, the diode can be tested to see if it is an ohmic or a nonohmic device.

A diode is a semiconducting device that allows current flow only if the diode is forward biased, which means that the anode is positive and the cathode is negative.

A plot of current versus voltage is shown in (Figure). Note that the behavior of the diode is shown as current versus voltage, whereas the resistor operation was shown as voltage versus current. A diode consists of an anode and a cathode. When the anode is at a negative potential and the cathode is at a positive potential, as shown in part (a), the diode is said to have reverse bias. With reverse bias, the diode has an extremely large resistance and there is very little current flow—essentially zero current—through the diode and the resistor. As the voltage applied to the circuit increases, the current remains essentially zero, until the voltage reaches the breakdown voltage and the diode conducts current, as shown in (Figure). When the battery and the potential across the diode are reversed, making the anode positive and the cathode negative, the diode conducts and current flows through the diode if the voltage is greater than 0.7 V. The resistance of the diode is close to zero. (This is the reason for the resistor in the circuit; if it were not there, the current would become very large.) You can see from the graph in (Figure) that the voltage and the current do not have a linear relationship. Thus, the diode is an example of a nonohmic device. 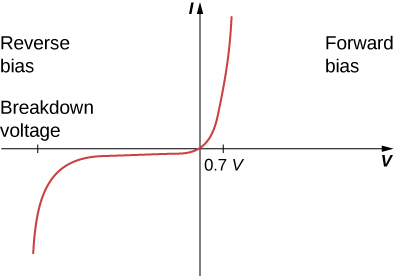 Ohm’s law is commonly stated as

, but originally it was stated as a microscopic view, in terms of the current density, the conductivity, and the electrical field. This microscopic view suggests the proportionality

In Determining Field from Potential, resistance was defined as

. In this section, we presented Ohm’s law, which is commonly expressed as

. The equations look exactly alike. What is the difference between Ohm’s law and the definition of resistance?

Shown below are the results of an experiment where four devices were connected across a variable voltage source. The voltage is increased and the current is measured. Which device, if any, is an ohmic device? 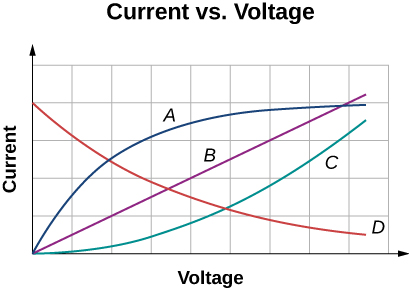 Device B shows a linear relationship and the device is ohmic.

resistor is connected across a D cell battery (1.5 V). What is the current through the resistor?

A resistor rated at

is connected across two D cell batteries (each 1.50 V) in series, with a total voltage of 3.00 V. The manufacturer advertises that their resistors are within 5% of the rated value. What are the possible minimum current and maximum current through the resistor?

A resistor is connected in series with a power supply of 20.00 V. The current measure is 0.50 A. What is the resistance of the resistor?

A resistor is placed in a circuit with an adjustable voltage source. The voltage across and the current through the resistor and the measurements are shown below. Estimate the resistance of the resistor. 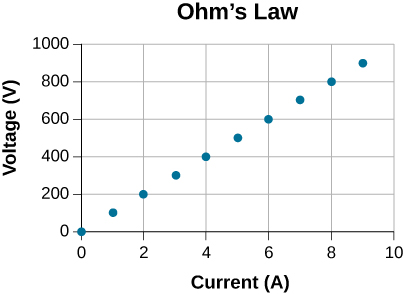 The following table show the measurements of a current through and the voltage across a sample of material. Plot the data, and assuming the object is an ohmic device, estimate the resistance.

Ohm’s law
empirical relation stating that the current I is proportional to the potential difference V; it is often written as

, where R is the resistance

ohmic
type of a material for which Ohm’s law is valid, that is, the voltage drop across the device is equal to the current times the resistance