A general treatment of the physics of electromagnetic waves is beyond the scope of this textbook. We can, however, investigate the special case of an electromagnetic wave that propagates through free space along the x-axis of a given coordinate system.

Electromagnetic Waves in One Direction

the z-component of the magnetic field as

, etc. Because we are assuming free space, there are no free charges or currents, so we can set

The transverse nature of electromagnetic waves

We examine first what Gauss’s law for electric fields implies about the relative directions of the electric field and the propagation direction in an electromagnetic wave. Assume the Gaussian surface to be the surface of a rectangular box whose cross-section is a square of side l and whose third side has length

that is constant over the opposite face of the box. Applying Gauss’s law gives

is the area of the front and back faces of the rectangular surface. But the charge enclosed is

, so this component’s net flux is also zero, and (Figure) implies

. Therefore, if there is an x-component of the electric field, it cannot vary with x. A uniform field of that kind would merely be superposed artificially on the traveling wave, for example, by having a pair of parallel-charged plates. Such a component

would not be part of an electromagnetic wave propagating along the x-axis; so

for this wave. Therefore, the only nonzero components of the electric field are

perpendicular to the direction of propagation of the wave.

The surface of a rectangular box of dimensions

is our Gaussian surface. The electric field shown is from an electromagnetic wave propagating along the x-axis. 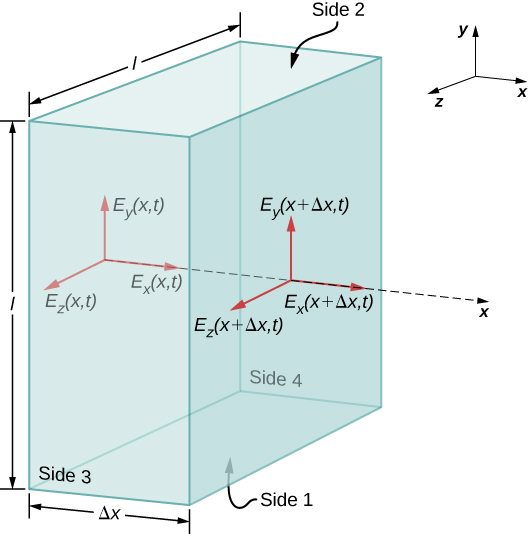 A similar argument holds by substituting E for B and using Gauss’s law for magnetism instead of Gauss’s law for electric fields. This shows that the B field is also perpendicular to the direction of propagation of the wave. The electromagnetic wave is therefore a transverse wave, with its oscillating electric and magnetic fields perpendicular to its direction of propagation.

The speed of propagation of electromagnetic waves

We can next apply Maxwell’s equations to the description given in connection with (Figure) in the previous section to obtain an equation for the E field from the changing B field, and for the B field from a changing E field. We then combine the two equations to show how the changing E and B fields propagate through space at a speed precisely equal to the speed of light.

First, we apply Faraday’s law over Side 3 of the Gaussian surface, using the path shown in (Figure). Because

is small and approximating

along the rectangular edge of Side 3 in the direction indicated, taking the B field crossing the face to be approximately its value in the middle of the area traversed. 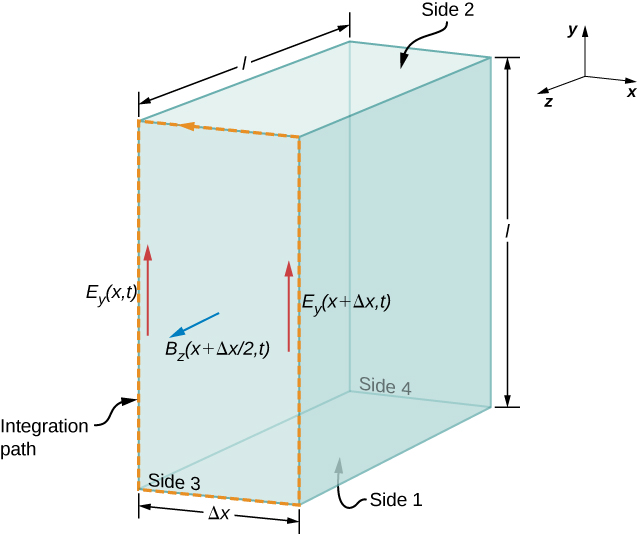 is small, the magnetic flux through the face can be approximated by its value in the center of the area traversed, namely

Therefore, from (Figure) and (Figure),

and taking the limit as

, we are left with

We could have applied Faraday’s law instead to the top surface (numbered 2) in (Figure), to obtain the resulting equation

This is the equation describing the spatially dependent E field produced by the time-dependent B field.

Next we apply the Ampère-Maxwell law (with

) over the same two faces (Surface 3 and then Surface 2) of the rectangular box of (Figure). Applying (Figure),

to Surface 3, and then to Surface 2, yields the two equations

These equations describe the spatially dependent B field produced by the time-dependent E field.

This is the form taken by the general wave equation for our plane wave. Because the equations describe a wave traveling at some as-yet-unspecified speed c, we can assume the field components are each functions of x – ct for the wave traveling in the +x-direction, that is,

It is left as a mathematical exercise to show, using the chain rule for differentiation, that (Figure) and (Figure) imply

. The same type of analysis with (Figure) and (Figure) would also show that the speed of an electromagnetic wave is

The physics of traveling electromagnetic fields was worked out by Maxwell in 1873. He showed in a more general way than our derivation that electromagnetic waves always travel in free space with a speed given by (Figure). If we evaluate the speed

which is the speed of light. Imagine the excitement that Maxwell must have felt when he discovered this equation! He had found a fundamental connection between two seemingly unrelated phenomena: electromagnetic fields and light.

How the E and B Fields Are Related

We now consider solutions to (Figure) in the form of plane waves for the electric field:

. We are justified in considering only sines and cosines in this way, and generalizing the results, because Fourier’s theorem implies we can express any wave, including even square step functions, as a superposition of sines and cosines.

At any one specific point in space, the E field oscillates sinusoidally at angular frequency

and similarly, the B field oscillates between

The amplitude of the wave is the maximum value of

is the distance covered by one complete cycle of the wave, and the wavenumber k is the number of wavelengths that fit into a distance of

in the units being used. These quantities are related in the same way as for a mechanical wave:

Given that the solution of

has the form shown in (Figure), we need to determine the B field that accompanies it. From (Figure), the magnetic field component

Because the solution for the B-field pattern of the wave propagates in the +x-direction at the same speed c as the E-field pattern, it must be a function of

. Thus, we conclude from (Figure) that

These results may be written as

The plane wave solution of Maxwell’s equations has the B field directly proportional to the E field at each point, with the relative directions shown.

Strategy To find the B-field strength, we rearrange (Figure) to solve for B, yielding

Solution We are given E, and c is the speed of light. Entering these into the expression for B yields

Check Your Understanding What conclusions did our analysis of Maxwell’s equations lead to about these properties of a plane electromagnetic wave:
(a) the relative directions of wave propagation, of the E field, and of B field,
(b) the speed of travel of the wave and how the speed depends on frequency, and
(c) the relative magnitudes of the E and B fields.

a. The directions of wave propagation, of the E field, and of B field are all mutually perpendicular. b. The speed of the electromagnetic wave is the speed of light

independent of frequency. c. The ratio of electric and magnetic field amplitudes is

Production and Detection of Electromagnetic Waves

A steady electric current produces a magnetic field that is constant in time and which does not propagate as a wave. Accelerating charges, however, produce electromagnetic waves. An electric charge oscillating up and down, or an alternating current or flow of charge in a conductor, emit radiation at the frequencies of their oscillations. The electromagnetic field of a dipole antenna is shown in (Figure). The positive and negative charges on the two conductors are made to reverse at the desired frequency by the output of a transmitter as the power source. The continually changing current accelerates charge in the antenna, and this results in an oscillating electric field a distance away from the antenna. The changing electric fields produce changing magnetic fields that in turn produce changing electric fields, which thereby propagate as electromagnetic waves. The frequency of this radiation is the same as the frequency of the ac source that is accelerating the electrons in the antenna. The two conducting elements of the dipole antenna are commonly straight wires. The total length of the two wires is typically about one-half of the desired wavelength (hence, the alternative name half-wave antenna), because this allows standing waves to be set up and enhances the effectiveness of the radiation.

The oscillatory motion of the charges in a dipole antenna produces electromagnetic radiation. 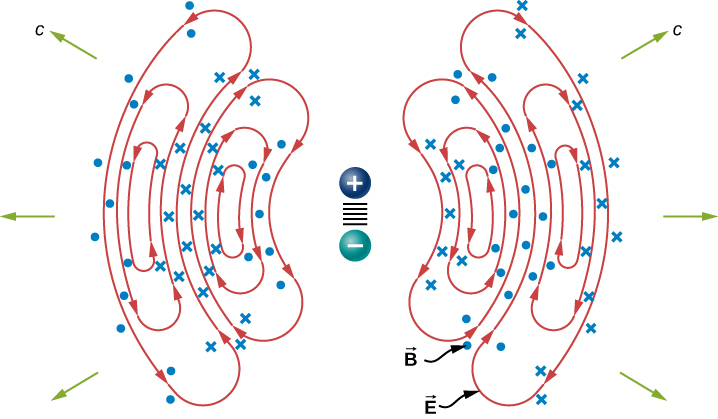 The electromagnetic waves carry energy away from their source, similar to a sound wave carrying energy away from a standing wave on a guitar string. An antenna for receiving electromagnetic signals works in reverse. Incoming electromagnetic waves induce oscillating currents in the antenna, each at its own frequency. The radio receiver includes a tuner circuit, whose resonant frequency can be adjusted. The tuner responds strongly to the desired frequency but not others, allowing the user to tune to the desired broadcast. Electrical components amplify the signal formed by the moving electrons. The signal is then converted into an audio and/or video format.

Use this simulation to broadcast radio waves. Wiggle the transmitter electron manually or have it oscillate automatically. Display the field as a curve or vectors. The strip chart shows the electron positions at the transmitter and at the receiver.

In which situation shown below will the electromagnetic wave be more successful in inducing a current in the wire? Explain. 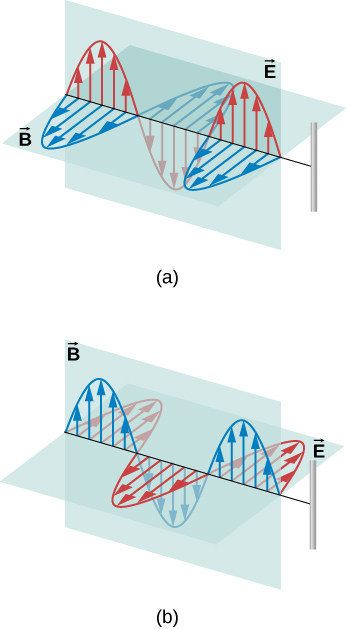 in (a), because the electric field is parallel to the wire, accelerating the electrons

In which situation shown below will the electromagnetic wave be more successful in inducing a current in the loop? Explain. 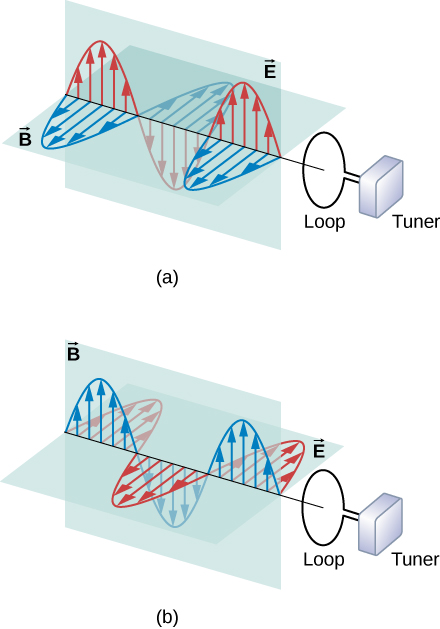 Under what conditions might wires in a circuit where the current flows in only one direction emit electromagnetic waves? 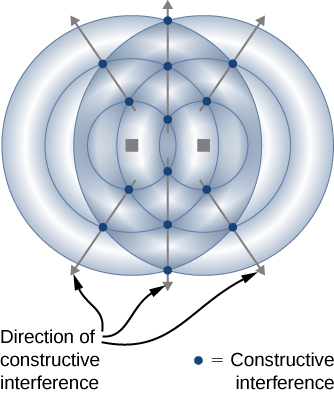 If the Sun suddenly turned off, we would not know it until its light stopped coming. How long would that be, given that the Sun is

An electromagnetic wave has a frequency of 12 MHz. What is its wavelength in vacuum?

If electric and magnetic field strengths vary sinusoidally in time at frequency 1.00 GHz, being zero at

. (a) When are the field strengths next equal to zero? (b) When do they reach their most negative value? (c) How much time is needed for them to complete one cycle?

The electric field of an electromagnetic wave traveling in vacuum is described by the following wave function:

where k is the wavenumber in rad/m, x is in m, t is in s.
Find the following quantities:
(a) amplitude
(b) frequency
(c) wavelength
(d) the direction of the travel of the wave
(e) the associated magnetic field wave

A plane electromagnetic wave of frequency 20 GHz moves in the positive y-axis direction such that its electric field is pointed along the z-axis. The amplitude of the electric field is 10 V/m. The start of time is chosen so that at

The following represents an electromagnetic wave traveling in the direction of the positive y-axis:

.
The wave is passing through a wide tube of circular cross-section of radius R whose axis is along the y-axis. Find the expression for the displacement current through the tube.