A circuit element dissipates or produces power according to

where I is the current through the element and V is the voltage across it. Since the current and the voltage both depend on time in an ac circuit, the instantaneous power

is also time dependent. A plot of p(t) for various circuit elements is shown in (Figure). For a resistor, i(t) and v(t) are in phase and therefore always have the same sign (see (Figure)). For a capacitor or inductor, the relative signs of i(t) and v(t) vary over a cycle due to their phase differences (see (Figure) and (Figure)). Consequently, p(t) is positive at some times and negative at others, indicating that capacitive and inductive elements produce power at some instants and absorb it at others.

Graph of instantaneous power for various circuit elements. (a) For the resistor,

whereas for (b) the capacitor and (c) the inductor,

which may be positive, negative, or zero, depending on 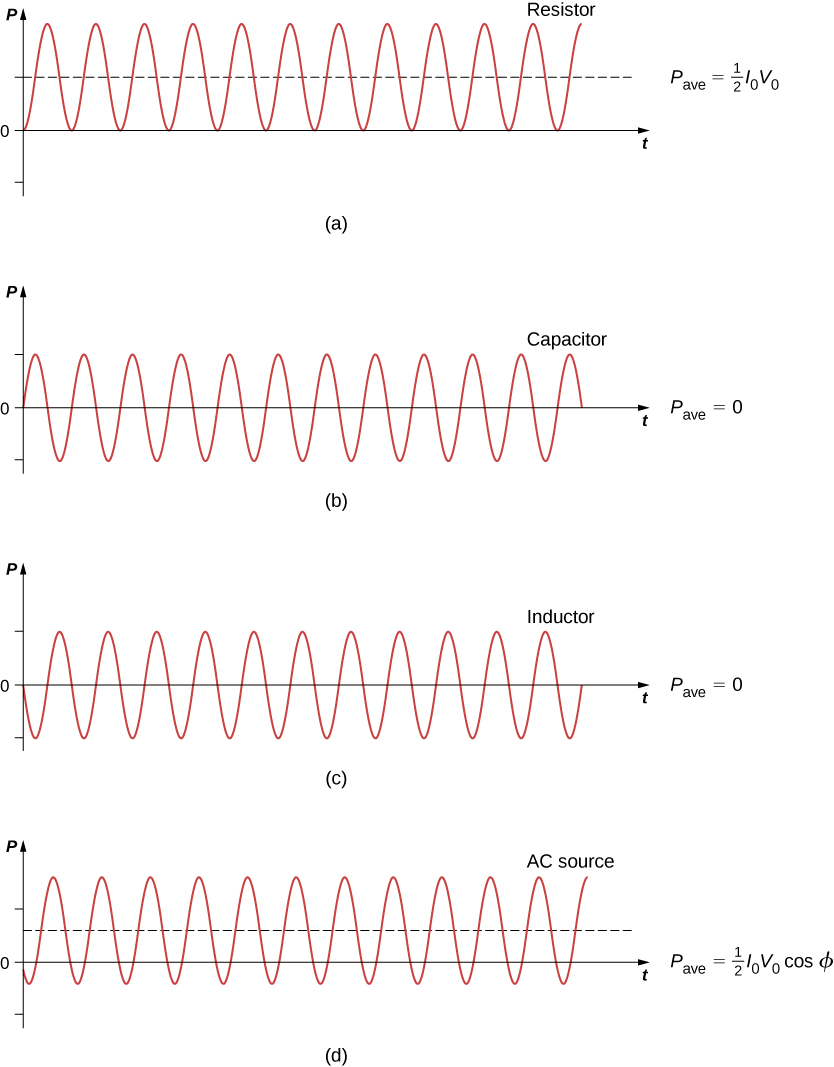 Because instantaneous power varies in both magnitude and sign over a cycle, it seldom has any practical importance. What we’re almost always concerned with is the power averaged over time, which we refer to as the average power. It is defined by the time average of the instantaneous power over one cycle:

is the period of the oscillations. With the substitutions

Evaluation of these two integrals yields

Hence, the average power associated with a circuit element is given by

is known as the power factor, which is the amount by which the power delivered in the circuit is less than the theoretical maximum of the circuit due to voltage and current being out of phase. For a resistor,

so the average power dissipated is

A comparison of p(t) and

look like its dc counterpart, we use the rms values

of the current and the voltage. By definition, these are

We may then write for the average power dissipated by a resistor,

This equation further emphasizes why the rms value is chosen in discussion rather than peak values. Both equations for average power are correct for (Figure), but the rms values in the formula give a cleaner representation, so the extra factor of 1/2 is not necessary.

Alternating voltages and currents are usually described in terms of their rms values. For example, the 110 V from a household outlet is an rms value. The amplitude of this source is

Because most ac meters are calibrated in terms of rms values, a typical ac voltmeter placed across a household outlet will read 110 V.

For a capacitor and an inductor,

Capacitors and inductors absorb energy from the circuit during one half-cycle and then discharge it back to the circuit during the other half-cycle. This behavior is illustrated in the plots of (Figure), (b) and (c), which show p(t) oscillating sinusoidally about zero.

The phase angle for an ac generator may have any value. If

the generator produces power; if

it absorbs power. In terms of rms values, the average power of an ac generator is written as

For the generator in an RLC circuit,

Hence the average power of the generator is

This can also be written as

which designates that the power produced by the generator is dissipated in the resistor. As we can see, Ohm’s law for the rms ac is found by dividing the rms voltage by the impedance.

is connected to an RLC circuit for which

Strategy The rms voltage is the amplitude of the voltage times

, and the resistance R.

Significance If the resistance is much larger than the reactance of the capacitor or inductor, the average power is a dc circuit equation of

where V replaces the rms voltage.

Check Your Understanding An ac voltmeter attached across the terminals of a 45-Hz ac generator reads 7.07 V. Write an expression for the emf of the generator.

Check Your Understanding Show that the rms voltages across a resistor, a capacitor, and an inductor in an ac circuit where the rms current is

respectively. Determine these values for the components of the RLC circuit of (Figure).

For what value of the phase angle

between the voltage output of an ac source and the current is the average power output of the source a maximum?

Discuss the differences between average power and instantaneous power.

The average ac current delivered to a circuit is zero. Despite this, power is dissipated in the circuit. Explain.

The instantaneous power can be negative, but the power output can’t be negative.

The emf of an ac source is given by

Calculate the rms currents for an ac source is given by

when connected across (a) a

A 40-mH inductor is connected to a 60-Hz AC source whose voltage amplitude is 50 V. If an AC voltmeter is placed across the inductor, what does it read?

For an RLC series circuit, the voltage amplitude and frequency of the source are 100 V and 500 Hz, respectively;

. Find the average power dissipated in the resistor for the following values for the capacitance: (a)

An ac source of voltage amplitude 10 V delivers electric energy at a rate of 0.80 W when its current output is 2.5 A. What is the phase angle

between the emf and the current?

An RLC series circuit has an impedance of

average power
time average of the instantaneous power over one cycle