104 Resonance in an AC Circuit

In the RLC series circuit of (Figure), the current amplitude is, from (Figure),

If we can vary the frequency of the ac generator while keeping the amplitude of its output voltage constant, then the current changes accordingly. A plot of

is shown in (Figure).

At an RLC circuit’s resonant frequency,

the current amplitude is at its maximum value. 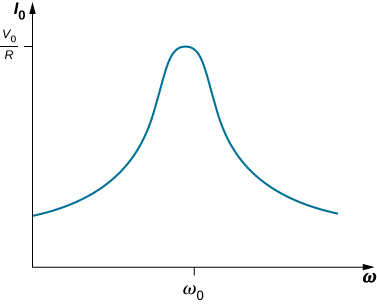 In Oscillations, we encountered a similar graph where the amplitude of a damped harmonic oscillator was plotted against the angular frequency of a sinusoidal driving force (see Forced Oscillations). This similarity is more than just a coincidence, as shown earlier by the application of Kirchhoff’s loop rule to the circuit of (Figure). This yields

of the RLC circuit is the frequency at which the amplitude of the current is a maximum and the circuit would oscillate if not driven by a voltage source. By inspection, this corresponds to the angular frequency

at which the impedance Z in (Figure) is a minimum, or when

This is the resonant angular frequency of the circuit. Substituting

Therefore, at resonance, an RLC circuit is purely resistive, with the applied emf and current in phase.

What happens to the power at resonance? (Figure) tells us how the average power transferred from an ac generator to the RLC combination varies with frequency. In addition,

reaches a maximum when Z, which depends on the frequency, is a minimum, that is, when

Thus, at resonance, the average power output of the source in an RLC series circuit is a maximum. From (Figure), this maximum is

(Figure) is a typical plot of

in the region of maximum power output. The bandwidth

over which the average power

is greater than one-half the maximum value of

The sharpness of the peak is described by a dimensionless quantity known as the quality factor Q of the circuit. By definition,

is the resonant angular frequency. A high Q indicates a sharp resonance peak. We can give Q in terms of the circuit parameters as

Like the current, the average power transferred from an ac generator to an RLC circuit peaks at the resonant frequency. 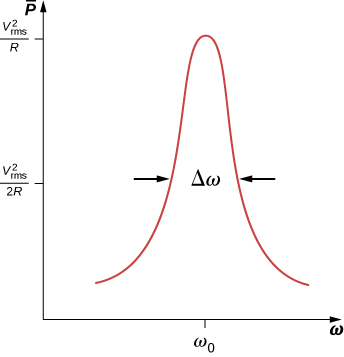 Resonant circuits are commonly used to pass or reject selected frequency ranges. This is done by adjusting the value of one of the elements and hence “tuning” the circuit to a particular resonant frequency. For example, in radios, the receiver is tuned to the desired station by adjusting the resonant frequency of its circuitry to match the frequency of the station. If the tuning circuit has a high Q, it will have a small bandwidth, so signals from other stations at frequencies even slightly different from the resonant frequency encounter a high impedance and are not passed by the circuit. Cell phones work in a similar fashion, communicating with signals of around 1 GHz that are tuned by an inductor-capacitor circuit. One of the most common applications of capacitors is their use in ac-timing circuits, based on attaining a resonant frequency. A metal detector also uses a shift in resonance frequency in detecting metals ((Figure)).

When a metal detector comes near a piece of metal, the self-inductance of one of its coils changes. This causes a shift in the resonant frequency of a circuit containing the coil. That shift is detected by the circuitry and transmitted to the diver by means of the headphones. (credit: modification of work by Eric Lippmann, U.S. Navy) 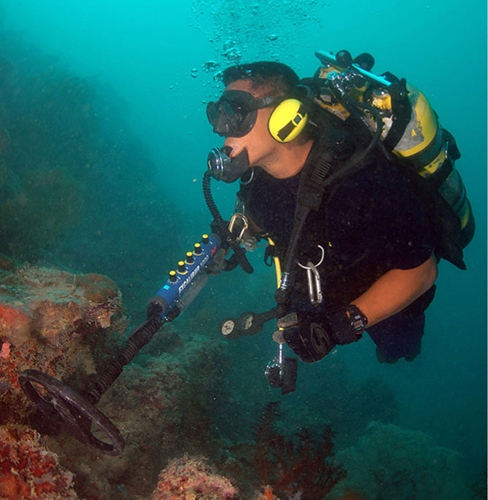 Strategy The resonant frequency for a RLC circuit is calculated from (Figure), which comes from a balance between the reactances of the capacitor and the inductor. Since the circuit is at resonance, the impedance is equal to the resistor. Then, the peak current is calculated by the voltage divided by the resistance.

Significance If the circuit were not set to the resonant frequency, we would need the impedance of the entire circuit to calculate the current.

(b) If an ac source of constant amplitude 4.00 V is set to this frequency, what is the average power transferred to the circuit? (c) Determine Q and the bandwidth of this circuit.

We then find for the bandwidth

Check Your Understanding In the circuit of (Figure),

(a) What is the resonant frequency? (b) What is the impedance of the circuit at resonance? (c) If the voltage amplitude is 10 V, what is i(t) at resonance? (d) The frequency of the AC generator is now changed to 200 Hz. Calculate the phase difference between the current and the emf of the generator.

Check Your Understanding What happens to the resonant frequency of an RLC series circuit when the following quantities are increased by a factor of 4: (a) the capacitance, (b) the self-inductance, and (c) the resistance?

Write an expression for the emf of the source.

what happens to the resonant angular frequency?

The resonant frequency of an RLC series circuit is

? (b) What is the impedance of the circuit at resonance?

For an RLC series circuit,

(a) If an ac source of variable frequency is connected to the circuit, at what frequency is maximum power dissipated in the resistor? (b) What is the quality factor of the circuit?

(a) Plot the current through the resistor as a function of the frequency f. (b) Use the plot to determine the resonant frequency of the circuit.

(a) What is the resonant frequency of a resistor, capacitor, and inductor connected in series if

Suppose a coil has a self-inductance of 20.0 H and a resistance of

. What (a) capacitance and (b) resistance must be connected in series with the coil to produce a circuit that has a resonant frequency of 100 Hz and a Q of 10?

An ac generator is connected to a device whose internal circuits are not known. We only know current and voltage outside the device, as shown below. Based on the information given, what can you infer about the electrical nature of the device and its power usage? 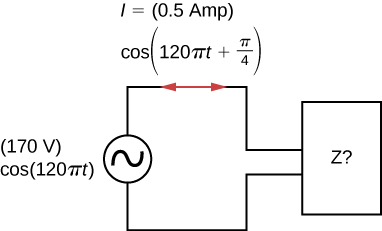 quality factor
dimensionless quantity that describes the sharpness of the peak of the bandwidth; a high quality factor is a sharp or narrow resonance peak