The ac circuit shown in (Figure), called an RLC series circuit, is a series combination of a resistor, capacitor, and inductor connected across an ac source. It produces an emf of

(a) An RLC series circuit. (b) A comparison of the generator output voltage and the current. The value of the phase difference

depends on the values of R, C, and L.

Since the elements are in series, the same current flows through each element at all points in time. The relative phase between the current and the emf is not obvious when all three elements are present. Consequently, we represent the current by the general expression

is the current amplitude and

is the phase angle between the current and the applied voltage. The phase angle is thus the amount by which the voltage and current are out of phase with each other in a circuit. Our task is to find

is helpful for analyzing the circuit. As shown in (Figure), the phasor representing

points in the same direction as the phasor for

phasor lags the i(t) phasor by

rad and has the amplitude

leads the i(t) phasor by

rad and has the amplitude

The phasor diagram for the RLC series circuit of (Figure). 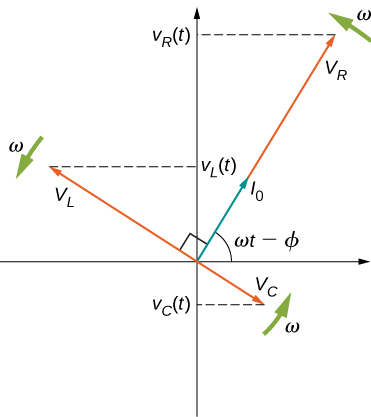 At any instant, the voltage across the RLC combination is

the emf of the source. Since a component of a sum of vectors is the sum of the components of the individual vectors—for example,

—the projection of the vector sum of phasors onto the vertical axis is the sum of the vertical projections of the individual phasors. Hence, if we add vectorially the phasors representing

and then find the projection of the resultant onto the vertical axis, we obtain

The vector sum of the phasors is shown in (Figure). The resultant phasor has an amplitude

and is directed at an angle

with respect to the

or i(t), phasor. The projection of this resultant phasor onto the vertical axis is

We can easily determine the unknown quantities

from the geometry of the phasor diagram. For the phase angle,

and after cancellation of

Furthermore, from the Pythagorean theorem,

The resultant of the phasors for

is equal to the phasor for

The i(t) phasor (not shown) is aligned with the 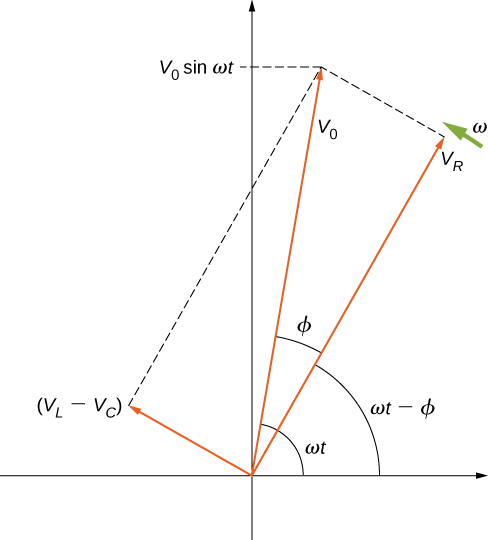 The current amplitude is therefore the ac version of Ohm’s law:

is known as the impedance of the circuit. Its unit is the ohm, and it is the ac analog to resistance in a dc circuit, which measures the combined effect of resistance, capacitive reactance, and inductive reactance ((Figure)).

Power capacitors are used to balance the impedance of the effective inductance in transmission lines. 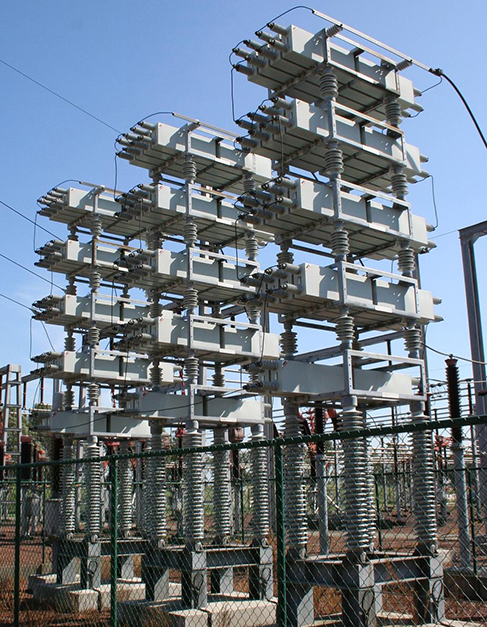 The RLC circuit is analogous to the wheel of a car driven over a corrugated road ((Figure)). The regularly spaced bumps in the road drive the wheel up and down; in the same way, a voltage source increases and decreases. The shock absorber acts like the resistance of the RLC circuit, damping and limiting the amplitude of the oscillation. Energy within the wheel system goes back and forth between kinetic and potential energy stored in the car spring, analogous to the shift between a maximum current, with energy stored in an inductor, and no current, with energy stored in the electric field of a capacitor. The amplitude of the wheel’s motion is at a maximum if the bumps in the road are hit at the resonant frequency, which we describe in more detail in Resonance in an AC Circuit.

On a car, the shock absorber damps motion and dissipates energy. This is much like the resistance in an RLC circuit. The mass and spring determine the resonant frequency. 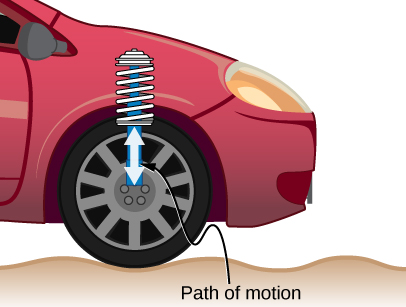 To analyze an ac circuit containing resistors, capacitors, and inductors, it is helpful to think of each device’s reactance and find the equivalent reactance using the rules we used for equivalent resistance in the past. Phasors are a great method to determine whether the emf of the circuit has positive or negative phase (namely, leads or lags other values). A mnemonic device of “ELI the ICE man” is sometimes used to remember that the emf (E) leads the current (I) in an inductor (L) and the current (I) leads the emf (E) in a capacitor (C).

Use the following steps to determine the emf of the circuit by phasors:

An RLC Series Circuit The output of an ac generator connected to an RLC series combination has a frequency of 200 Hz and an amplitude of 0.100 V. If

Check Your Understanding Find the voltages across the resistor, the capacitor, and the inductor in the circuit of (Figure) using

as the output of the ac generator.

What is the impedance of a series combination of a

capacitor at a frequency of 2.0 kHz?

A resistor and capacitor are connected in series across an ac generator. The emf of the generator is given by

A resistor and inductor are connected in series across an ac generator. The emf of the generator is given by

In an RLC series circuit, the voltage amplitude and frequency of the source are 100 V and 500 Hz, respectively, an

, how does the current vary with time? (d) Repeat the calculations with C changed to

An RLC series circuit with

For the circuit shown below, what are (a) the total impedance and (b) the phase angle between the current and the emf? (c) Write an expression for 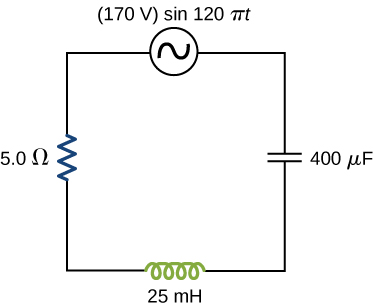