When the switch is closed in the RLC circuit of (Figure)(a), the capacitor begins to discharge and electromagnetic energy is dissipated by the resistor at a rate

where i and q are time-dependent functions. This reduces to

before the switch is closed.

This equation is analogous to

which is the equation of motion for a damped mass-spring system (you first encountered this equation in Oscillations). As we saw in that chapter, it can be shown that the solution to this differential equation takes three forms, depending on whether the angular frequency of the undamped spring is greater than, equal to, or less than b/2m. Therefore, the result can be underdamped

. By analogy, the solution q(t) to the RLC differential equation has the same feature. Here we look only at the case of under-damping. By replacing m by L, b by R, k by 1/C, and x by q in (Figure), and assuming

where the angular frequency of the oscillations is given by

This underdamped solution is shown in (Figure)(b). Notice that the amplitude of the oscillations decreases as energy is dissipated in the resistor. (Figure) can be confirmed experimentally by measuring the voltage across the capacitor as a function of time. This voltage, multiplied by the capacitance of the capacitor, then gives q(t).

Try an interactive circuit construction kit that allows you to graph current and voltage as a function of time. You can add inductors and capacitors to work with any combination of R, L, and C circuits with both dc and ac sources.

Try out a circuit-based java applet website that has many problems with both dc and ac sources that will help you practice circuit problems.

Check Your Understanding In an RLC circuit,

(a) Is the circuit underdamped, critically damped, or overdamped? (b) If the circuit starts oscillating with a charge of

on the capacitor, how much energy has been dissipated in the resistor by the time the oscillations cease?

When a wire is connected between the two ends of a solenoid, the resulting circuit can oscillate like an RLC circuit. Describe what causes the capacitance in this circuit.

Describe what effect the resistance of the connecting wires has on an oscillating LC circuit.

This creates an RLC circuit that dissipates energy, causing oscillations to decrease in amplitude slowly or quickly depending on the value of resistance.

Suppose you wanted to design an LC circuit with a frequency of 0.01 Hz. What problems might you encounter?

A radio receiver uses an RLC circuit to pick out particular frequencies to listen to in your house or car without hearing other unwanted frequencies. How would someone design such a circuit?

You would have to pick out a resistance that is small enough so that only one station at a time is picked up, but big enough so that the tuner doesn’t have to be set at exactly the correct frequency. The inductance or capacitance would have to be varied to tune into the station however practically speaking, variable capacitors are a lot easier to build in a circuit.

In an oscillating RLC circuit,

What is the angular frequency of the oscillations?

In an oscillating RLC circuit with

how much time elapses before the amplitude of the oscillations drops to half its initial value?

of its initial value of charge in 50 cycles? To

of its initial value in 50 cycles?

Show that the self-inductance per unit length of an infinite, straight, thin wire is infinite.

Let a equal the radius of the long, thin wire, r the location where the magnetic field is measured, and R the upper limit of the problem where we will take R as it approaches infinity.
proof

Two long, parallel wires carry equal currents in opposite directions. The radius of each wire is a, and the distance between the centers of the wires is d. Show that if the magnetic flux within the wires themselves can be ignored, the self-inductance of a length l of such a pair of wires is

(Hint: Calculate the magnetic flux through a rectangle of length l between the wires and then use 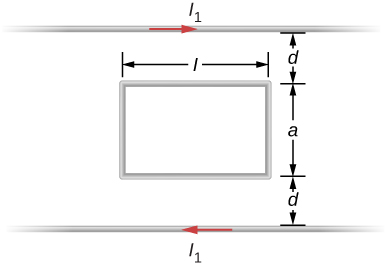 Suppose that a cylindrical solenoid is wrapped around a core of iron whose magnetic susceptibility is x. Using (Figure), show that the self-inductance of the solenoid is given by

where l is its length, A its cross-sectional area, and N its total number of turns.

A rectangular toroid with inner radius

turns is filled with an iron core of magnetic susceptibility

. (a) What is the self-inductance of the toroid? (b) If the current through the toroid is 2.0 A, what is the magnetic field at the center of the core? (c) For this same 2.0-A current, what is the effective surface current formed by the aligned atomic current loops in the iron core?

The switch S of the circuit shown below is closed at 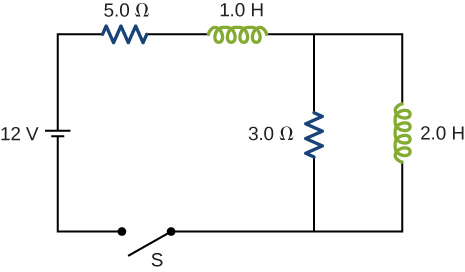 In an oscillating RLC circuit,

. Initially, the capacitor has a charge of

and the current is zero. Calculate the charge on the capacitor (a) five cycles later and (b) 50 cycles later.

A 25.0-H inductor has 100 A of current turned off in 1.00 ms. (a) What voltage is induced to oppose this? (b) What is unreasonable about this result? (c) Which assumption or premise is responsible?

; (b) The voltage is so extremely high that arcing would occur and the current would not be reduced so rapidly. (c) It is not reasonable to shut off such a large current in such a large inductor in such an extremely short time.

In a damped oscillating circuit the energy is dissipated in the resistor. The Q-factor is a measure of the persistence of the oscillator against the dissipative loss. (a) Prove that for a lightly damped circuit the energy, U, in the circuit decreases according to the following equation.

(b) Using the definition of the Q-factor as energy divided by the loss over the next cycle, prove that Q-factor of a lightly damped oscillator as defined in this problem is

(Hint: For (b), to obtain Q, divide E at the beginning of one cycle by the change

over the next cycle.)

The switch in the circuit shown below is closed at

. Find currents through (a)

, and (c) the battery as function of time. 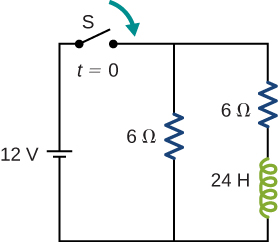 A square loop of side 2 cm is placed 1 cm from a long wire carrying a current that varies with time at a constant rate of 3 A/s as shown below. (a) Use Ampère’s law and find the magnetic field. (b) Determine the magnetic flux through the loop. (c) If the loop has a resistance of

, how much induced current flows in the loop?

A rectangular copper ring, of mass 100 g and resistance

, what is the time when it exits the region of magnetic field for the following values:

Assume the magnetic field of the induced current is negligible compared to 3 T. 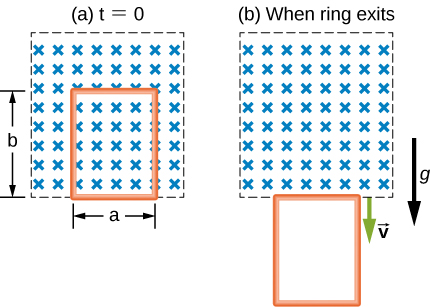 RLC circuit
circuit with an ac source, resistor, inductor, and capacitor all in series.