In this section, we study simple models of ac voltage sources connected to three circuit components: (1) a resistor, (2) a capacitor, and (3) an inductor. The power furnished by an ac voltage source has an emf given by

as shown in (Figure). This sine function assumes we start recording the voltage when it is

at a time of

A phase constant may be involved that shifts the function when we start measuring voltages, similar to the phase constant in the waves we studied in Waves. However, because we are free to choose when we start examining the voltage, we can ignore this phase constant for now. We can measure this voltage across the circuit components using one of two methods: (1) a quantitative approach based on our knowledge of circuits, or (2) a graphical approach that is explained in the coming sections.

of an ac generator. (b) Symbol used to represent an ac voltage source in a circuit diagram. 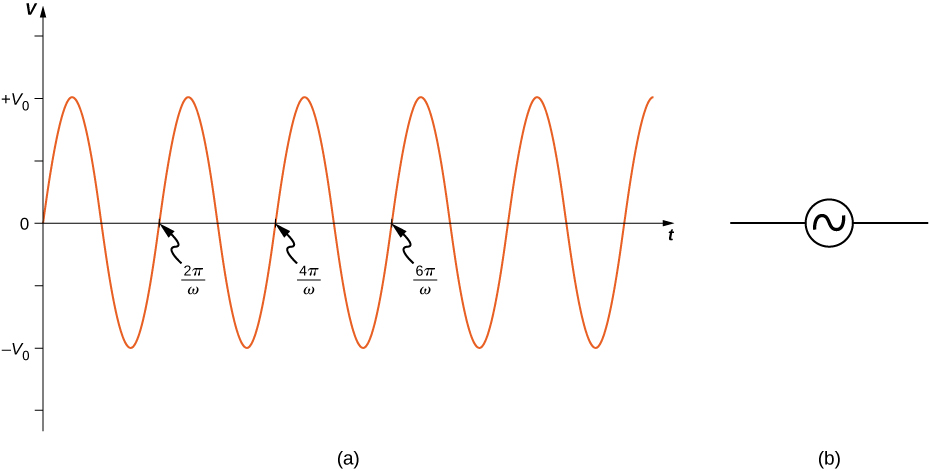 First, consider a resistor connected across an ac voltage source. From Kirchhoff’s loop rule, the instantaneous voltage across the resistor of (Figure)(a) is

and the instantaneous current through the resistor is

(a) A resistor connected across an ac voltage source. (b) The current

through the resistor and the voltage

across the resistor. The two quantities are in phase.

is the amplitude of the time-varying current. Plots of

are shown in (Figure)(b). Both curves reach their maxima and minima at the same times, that is, the current through and the voltage across the resistor are in phase.

is shown in (Figure)(a), with the current on the vertical axis. The arrow (or phasor) is rotating counterclockwise at a constant angular frequency

so we are viewing it at one instant in time. If the length of the arrow corresponds to the current amplitude

the projection of the rotating arrow onto the vertical axis is

which is the instantaneous current.

The vertical axis on a phasor diagram could be either the voltage or the current, depending on the phasor that is being examined. In addition, several quantities can be depicted on the same phasor diagram. For example, both the current

are shown in the diagram of (Figure)(b). Since they have the same frequency and are in phase, their phasors point in the same direction and rotate together. The relative lengths of the two phasors are arbitrary because they represent different quantities; however, the ratio of the lengths of the two phasors can be represented by the resistance, since one is a voltage phasor and the other is a current phasor.

Now let’s consider a capacitor connected across an ac voltage source. From Kirchhoff’s loop rule, the instantaneous voltage across the capacitor of (Figure)(a) is

Recall that the charge in a capacitor is given by

This is true at any time measured in the ac cycle of voltage. Consequently, the instantaneous charge on the capacitor is

Since the current in the circuit is the rate at which charge enters (or leaves) the capacitor,

is the current amplitude. Using the trigonometric relationship

we may express the instantaneous current as

, we obtain an equation that looks similar to Ohm’s law:

is analogous to resistance in a dc circuit in the sense that both quantities are a ratio of a voltage to a current. As a result, they have the same unit, the ohm. Keep in mind, however, that a capacitor stores and discharges electric energy, whereas a resistor dissipates it. The quantity

(a) A capacitor connected across an ac generator. (b) The current

through the capacitor and the voltage

across the capacitor. Notice that

A comparison of the expressions for

shows that there is a phase difference of

between them. When these two quantities are plotted together, the current peaks a quarter cycle (or

or a quarter of a cycle.

The corresponding phasor diagram is shown in (Figure). Here, the relationship between

is represented by having their phasors rotate at the same angular frequency, with the current phasor leading by

The phasor diagram for the capacitor of (Figure). The current phasor leads the voltage phasor by

rad as they both rotate with the same angular frequency. 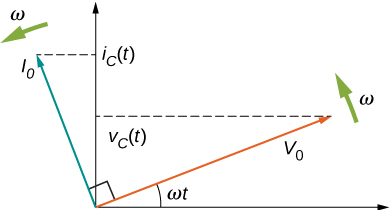 To this point, we have exclusively been using peak values of the current or voltage in our discussion, namely,

However, if we average out the values of current or voltage, these values are zero. Therefore, we often use a second convention called the root mean square value, or rms value, in discussions of current and voltage. The rms operates in reverse of the terminology. First, you square the function, next, you take the mean, and then, you find the square root. As a result, the rms values of current and voltage are not zero. Appliances and devices are commonly quoted with rms values for their operations, rather than peak values. We indicate rms values with a subscript attached to a capital letter (such as

Although a capacitor is basically an open circuit, an rms current, or the root mean square of the current, appears in a circuit with an ac voltage applied to a capacitor. Consider that

is the peak current in an ac system. The rms voltage, or the root mean square of the voltage, is

is the peak voltage in an ac system. The rms current appears because the voltage is continually reversing, charging, and discharging the capacitor. If the frequency goes to zero, which would be a dc voltage,

tends to infinity, and the current is zero once the capacitor is charged. At very high frequencies, the capacitor’s reactance tends to zero—it has a negligible reactance and does not impede the current (it acts like a simple wire).

Lastly, let’s consider an inductor connected to an ac voltage source. From Kirchhoff’s loop rule, the voltage across the inductor L of (Figure)(a) is

The emf across an inductor is equal to

however, the potential difference across the inductor is

, because if we consider that the voltage around the loop must equal zero, the voltage gained from the ac source must dissipate through the inductor. Therefore, connecting this with the ac voltage source, we have

(a) An inductor connected across an ac generator. (b) The current

through the inductor and the voltage

across the inductor. Here

may also be written in a form analogous to Ohm’s law:

is known as the inductive reactance of the inductor, or the opposition of an inductor to a change in current; its unit is also the ohm. Note that

A phase difference of

, or a quarter of a cycle. The phasor diagram for this case is shown in (Figure).

The phasor diagram for the inductor of (Figure). The current phasor lags the voltage phasor by

rad as they both rotate with the same angular frequency. 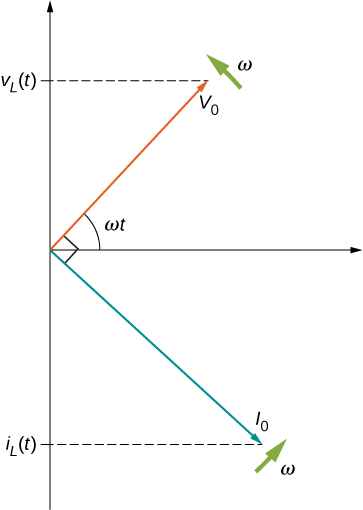 An animation from the University of New South Wales AC Circuits illustrates some of the concepts we discuss in this chapter. They also include wave and phasor diagrams that evolve over time so that you can get a better picture of how each changes over time.

Strategy The entire AC voltage across each device is the same as the source voltage. We can find the currents by finding the reactance X of each device and solving for the peak current using

Solution The voltage across the terminals of the source is

is the angular frequency. Since v(t) is also the voltage across each of the elements, we have

the amplitude of the current through the resistor is

b. From (Figure), the capacitive reactance is

so the maximum value of the current is

and the instantaneous current is given by

c. From (Figure), the inductive reactance is

The maximum current is therefore

and the instantaneous current is

Significance Although the voltage across each device is the same, the peak current has different values, depending on the reactance. The reactance for each device depends on the values of resistance, capacitance, or inductance.

Check Your Understanding Repeat (Figure) for an ac source of amplitude 20 V and frequency 100 Hz.

Calculate the reactance of a

What is the capacitance of a capacitor whose reactance is

What is the self-inductance of a coil whose reactance is

At what frequency is the reactance of a

capacitor equal to that of a 10-mH inductor?

resistor is connected across the emf

. Write an expression for the current through the resistor.

capacitor is connected to an emf given by

. (a) What is the reactance of the capacitor? (b) Write an expression for the current output of the source.

A 100-mH inductor is connected across the emf of the preceding problem. (a) What is the reactance of the inductor? (b) Write an expression for the current through the inductor.

capacitive reactance
opposition of a capacitor to a change in current

inductive reactance
opposition of an inductor to a change in current