24 Statements of the Second Law of Thermodynamics

It is impossible to convert the heat from a single source into work without any other effect.

This is known as the Kelvin statement of the second law of thermodynamics. This statement describes an unattainable “perfect engine,” as represented schematically in (Figure)(a). Note that “without any other effect” is a very strong restriction. For example, an engine can absorb heat and turn it all into work, but not if it completes a cycle. Without completing a cycle, the substance in the engine is not in its original state and therefore an “other effect” has occurred. Another example is a chamber of gas that can absorb heat from a heat reservoir and do work isothermally against a piston as it expands. However, if the gas were returned to its initial state (that is, made to complete a cycle), it would have to be compressed and heat would have to be extracted from it.

The Kelvin statement is a manifestation of a well-known engineering problem. Despite advancing technology, we are not able to build a heat engine that is

efficient. The first law does not exclude the possibility of constructing a perfect engine, but the second law forbids it.

(a) A “perfect heat engine” converts all input heat into work. (b) A “perfect refrigerator” transports heat from a cold reservoir to a hot reservoir without work input. Neither of these devices is achievable in reality.

from the hot reservoir, does work W, and discards heat Q to the cold reservoir. From the first law, these quantities are related by

Suppose these two devices are combined as shown in (Figure). The net heat removed from the hot reservoir is

, no net heat transfer occurs to or from the cold reservoir, and work W is done on some external body. Since 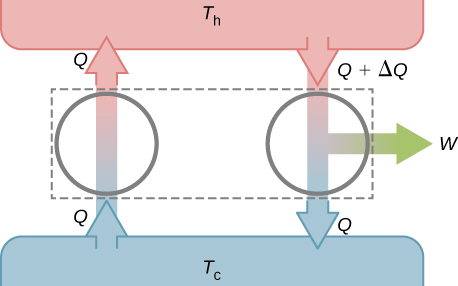 per cycle, it follows from (Figure) that

. It then follows from the first law that

Suppose the cycle of D is reversed so that it operates as a refrigerator, and the two engines are coupled such that the work output of E is used to drive D, as shown in (Figure)(b). Since

the net result of each cycle is equivalent to a spontaneous transfer of heat from the cold reservoir to the hot reservoir, a process the second law does not allow. The original assumption must therefore be wrong, and it is impossible to construct an irreversible engine such that E is more efficient than the reversible engine D.

A perfect heat engine would have

, which would lead to

A perfect refrigerator would need zero work, that is,

Check Your Understanding Show that

for the hypothetical engine of (Figure)(b).

From the engine on the right, we have

From the refrigerator on the right, we have

from the cold reservoir to hot reservoir without any other effect.

Discuss the practical advantages and disadvantages of heat pumps and electric heating.

Heat pumps can efficiently extract heat from the ground to heat on cooler days or pull heat out of the house on warmer days. The disadvantage of heat pumps are that they are more costly than alternatives, require maintenance, and will not work efficiently when temperature differences between the inside and outside are very large. Electric heating is much cheaper to purchase than a heat pump; however, it may be more costly to run depending on the electric rates and amount of usage.

The energy output of a heat pump is greater than the energy used to operate the pump. Why doesn’t this statement violate the first law of thermodynamics?

Speculate as to why nuclear power plants are less efficient than fossil-fuel plants based on temperature arguments.

A nuclear reactor needs to have a lower temperature to operate, so its efficiency will not be as great as a fossil-fuel plant. This argument does not take into consideration the amount of energy per reaction: Nuclear power has a far greater energy output than fossil fuels.

An ideal gas goes from state

when it is allowed to expand freely. Is it possible to represent the actual process on a pV diagram? Explain.

perfect engine
engine that can convert heat into work with