In the early 1820s, Sadi Carnot (1786−1832), a French engineer, became interested in improving the efficiencies of practical heat engines. In 1824, his studies led him to propose a hypothetical working cycle with the highest possible efficiency between the same two reservoirs, known now as the Carnot cycle. An engine operating in this cycle is called a Carnot engine. The Carnot cycle is of special importance for a variety of reasons. At a practical level, this cycle represents a reversible model for the steam power plant and the refrigerator or heat pump. Yet, it is also very important theoretically, for it plays a major role in the development of another important statement of the second law of thermodynamics. Finally, because only two reservoirs are involved in its operation, it can be used along with the second law of thermodynamics to define an absolute temperature scale that is truly independent of any substance used for temperature measurement.

With an ideal gas as the working substance, the steps of the Carnot cycle, as represented by (Figure), are as follows.

This work is equal to the area enclosed by the loop shown in the pV diagram of (Figure). Because the initial and final states of the system are the same, the change of the internal energy of the gas in the cycle must be zero, that is,

. The first law of thermodynamics then gives

To find the efficiency of this engine, we first divide

When the adiabatic constant from step 2 is divided by that of step 4, we find

Substituting this into the equation for

Finally, with (Figure), we find that the efficiency of this ideal gas Carnot engine is given by

The cycle of an ideal gas Carnot refrigerator is represented by the pV diagram of (Figure). It is a Carnot engine operating in reverse. The refrigerator extracts heat

from a cold-temperature reservoir at

when the ideal gas expands isothermally. The gas is then compressed adiabatically until its temperature reaches

after which an isothermal compression of the gas results in heat

being discarded to a high-temperature reservoir at

Finally, the cycle is completed by an adiabatic expansion of the gas, causing its temperature to drop to

The work done on the gas in one cycle of the Carnot refrigerator is shown and given by the area enclosed by the loop MPONM. 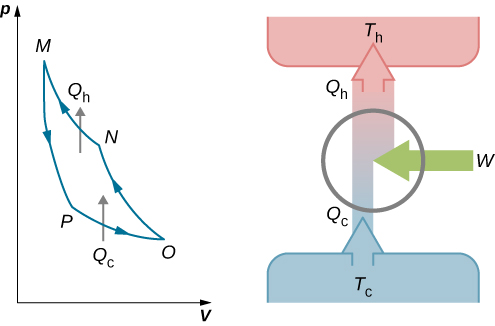 The work done on the ideal gas is equal to the area enclosed by the path of the pV diagram. From the first law, this work is given by

When combined with (Figure), this yields

We have just found equations representing the efficiency of a Carnot engine and the coefficient of performance of a Carnot refrigerator or a Carnot heat pump, assuming an ideal gas for the working substance in both devices. However, these equations are more general than their derivations imply. We will soon show that they are both valid no matter what the working substance is.

Carnot summarized his study of the Carnot engine and Carnot cycle into what is now known as Carnot’s principle:

No engine working between two reservoirs at constant temperatures can have a greater efficiency than a reversible engine.

This principle can be viewed as another statement of the second law of thermodynamics and can be shown to be equivalent to the Kelvin statement and the Clausius statement.

Strategy From the temperature dependence of the thermal efficiency of the Carnot engine, we can find the temperature of the hot reservoir. Then, from the definition of the efficiency, we can find the heat removed when the work done by the engine is given. Finally, energy conservation will lead to how much heat must be dumped to the cold reservoir.

Significance A Carnot engine has the maximum possible efficiency of converting heat into work between two reservoirs, but this does not necessarily mean it is

efficient. As the difference in temperatures of the hot and cold reservoir increases, the efficiency of a Carnot engine increases.

and an inside temperature of

. What is the work needed if the heat delivered to the inside of the house is 30.0 kJ?

Strategy Because the heat pump is assumed to be a Carnot pump, its performance coefficient is given by

Thus, we can find the work W from the heat delivered

Solution The work needed is obtained from

In terms of energy costs, the heat pump is a very economical means for heating buildings ((Figure)). Contrast this method with turning electrical energy directly into heat with resistive heating elements. In this case, one unit of electrical energy furnishes at most only one unit of heat. Unfortunately, heat pumps have problems that do limit their usefulness. They are quite expensive to purchase compared to resistive heating elements, and, as the performance coefficient for a Carnot heat pump shows, they become less effective as the outside temperature decreases. In fact, below about

, the heat they furnish is less than the energy used to operate them.

A photograph of a heat pump (large box) located outside a house. This heat pump is located in a warm climate area, like the southern United States, since it would be far too inefficient located in the northern half of the United States. (credit: modification of work by Peter Stevens) 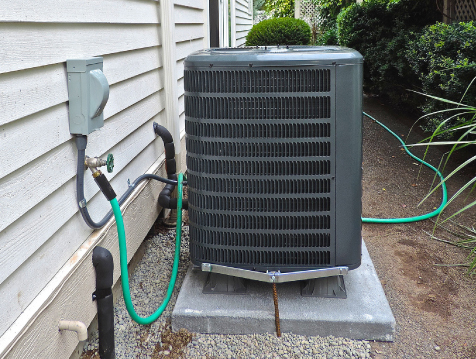 Check Your Understanding A Carnot engine operates between reservoirs at

To increase the efficiency of a Carnot engine, should the temperature of the hot reservoir be raised or lowered? What about the cold reservoir?

How could you design a Carnot engine with

What type of processes occur in a Carnot cycle?

, respectively. Which is its coefficient of performance?

Suppose a Carnot refrigerator operates between

Calculate the amount of work required to extract 1.0 J of heat from the cold reservoir if (a)

A Carnot engine operates between reservoirs at 600 and 300 K. If the engine absorbs 100 J per cycle at the hot reservoir, what is its work output per cycle?

A 500-W motor operates a Carnot refrigerator between

. (a) What is the amount of heat per second extracted from the inside of the refrigerator? (b) How much heat is exhausted to the outside air per second?

Sketch a Carnot cycle on a temperature-volume diagram. 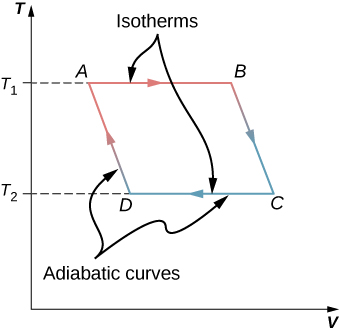 A Carnot heat pump operates between

. How much heat is exhausted into the interior of a house for every 1.0 J of work done by the pump?

An engine operating between heat reservoirs at

extracts 1000 J per cycle from the hot reservoir. (a) What is the maximum possible work that engine can do per cycle? (b) For this maximum work, how much heat is exhausted to the cold reservoir per cycle?

Suppose a Carnot engine can be operated between two reservoirs as either a heat engine or a refrigerator. How is the coefficient of performance of the refrigerator related to the efficiency of the heat engine?

and exhaust heat to the air at