A thermodynamic system includes anything whose thermodynamic properties are of interest. It is embedded in its surroundings or environment; it can exchange heat with, and do work on, its environment through a boundary, which is the imagined wall that separates the system and the environment ((Figure)). In reality, the immediate surroundings of the system are interacting with it directly and therefore have a much stronger influence on its behavior and properties. For example, if we are studying a car engine, the burning gasoline inside the cylinder of the engine is the thermodynamic system; the piston, exhaust system, radiator, and air outside form the surroundings of the system. The boundary then consists of the inner surfaces of the cylinder and piston.

(a) A system, which can include any relevant process or value, is self-contained in an area. The surroundings may also have relevant information; however, the surroundings are important to study only if the situation is an open system. (b) The burning gasoline in the cylinder of a car engine is an example of a thermodynamic system.

Normally, a system must have some interactions with its surroundings. A system is called an isolated or closed system if it is completely separated from its environment—for example, a gas that is surrounded by immovable and thermally insulating walls. In reality, a closed system does not exist unless the entire universe is treated as the system, or it is used as a model for an actual system that has minimal interactions with its environment. Most systems are known as an open system, which can exchange energy and/or matter with its surroundings ((Figure)).

(a) This boiling tea kettle is an open thermodynamic system. It transfers heat and matter (steam) to its surroundings. (b) A pressure cooker is a good approximation to a closed system. A little steam escapes through the top valve to prevent explosion. (credit a: modification of work by Gina Hamilton; credit b: modification of work by Jane Whitney) 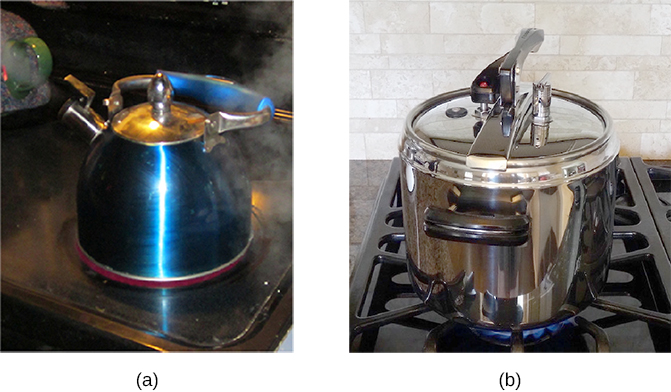 Before we can carry out any study on a thermodynamic system, we need a fundamental characterization of the system. When we studied a mechanical system, we focused on the forces and torques on the system, and their balances dictated the mechanical equilibrium of the system. In a similar way, we should examine the heat transfer between a thermodynamic system and its environment or between the different parts of the system, and its balance should dictate the thermal equilibrium of the system. Intuitively, such a balance is reached if the temperature becomes the same for different objects or parts of the system in thermal contact, and the net heat transfer over time becomes zero.

Thus, when we say two objects (a thermodynamic system and its environment, for example) are in thermal equilibrium, we mean that they are at the same temperature, as we discussed in Temperature and Heat. Let us consider three objects at temperatures

respectively. How do we know whether they are in thermal equilibrium? The governing principle here is the zeroth law of thermodynamics, as described in Temperature and Heat on temperature and heat:

Mathematically, we can simply write the zeroth law of thermodynamics as

This is the most fundamental way of defining temperature: Two objects must be at the same temperature thermodynamically if the net heat transfer between them is zero when they are put in thermal contact and have reached a thermal equilibrium.

The zeroth law of thermodynamics is equally applicable to the different parts of a closed system and requires that the temperature everywhere inside the system be the same if the system has reached a thermal equilibrium. To simplify our discussion, we assume the system is uniform with only one type of material—for example, water in a tank. The measurable properties of the system at least include its volume, pressure, and temperature. The range of specific relevant variables depends upon the system. For example, for a stretched rubber band, the relevant variables would be length, tension, and temperature. The relationship between these three basic properties of the system is called the equation of state of the system and is written symbolically for a closed system as

where V, p, and T are the volume, pressure, and temperature of the system at a given condition.

In principle, this equation of state exists for any thermodynamic system but is not always readily available. The forms of

for many materials have been determined either experimentally or theoretically. In the preceding chapter, we saw an example of an equation of state for an ideal gas,

Consider these scenarios and state whether work is done by the system on the environment (SE) or by the environment on the system (ES): (a) opening a carbonated beverage; (b) filling a flat tire; (c) a sealed empty gas can expands on a hot day, bowing out the walls.

on an isothermal curve, where p is the pressure, V is the volume, b is a constant, and c is a function of temperature. Show that a temperature scale under an isochoric process can be established with this gas and is identical to that of an ideal gas.

is the temperature scale desired and mirrors the ideal gas if under constant volume.

A mole of gas has isobaric expansion coefficient

. Find the equation of state of the gas.

and an isothermal pressure-volume coefficient

boundary
imagined walls that separate the system and its surroundings

environment
outside of the system being studied

equation of state
describes properties of matter under given physical conditions

surroundings
environment that interacts with an open system