Any physical property that depends consistently and reproducibly on temperature can be used as the basis of a thermometer. For example, volume increases with temperature for most substances. This property is the basis for the common alcohol thermometer and the original mercury thermometers. Other properties used to measure temperature include electrical resistance, color, and the emission of infrared radiation ((Figure)).

Because many physical properties depend on temperature, the variety of thermometers is remarkable. (a) In this common type of thermometer, the alcohol, containing a red dye, expands more rapidly than the glass encasing it. When the thermometer’s temperature increases, the liquid from the bulb is forced into the narrow tube, producing a large change in the length of the column for a small change in temperature. (b) Each of the six squares on this plastic (liquid crystal) thermometer contains a film of a different heat-sensitive liquid crystal material. Below

, all six squares are black. When the plastic thermometer is exposed to a temperature of

, the first liquid crystal square changes color. When the temperature reaches above

, the second liquid crystal square also changes color, and so forth. (c) A firefighter uses a pyrometer to check the temperature of an aircraft carrier’s ventilation system. The pyrometer measures infrared radiation (whose emission varies with temperature) from the vent and quickly produces a temperature readout. Infrared thermometers are also frequently used to measure body temperature by gently placing them in the ear canal. Such thermometers are more accurate than the alcohol thermometers placed under the tongue or in the armpit. (credit b: modification of work by Tess Watson; credit c: modification of work by Lamel J. Hinton, U.S. Navy) 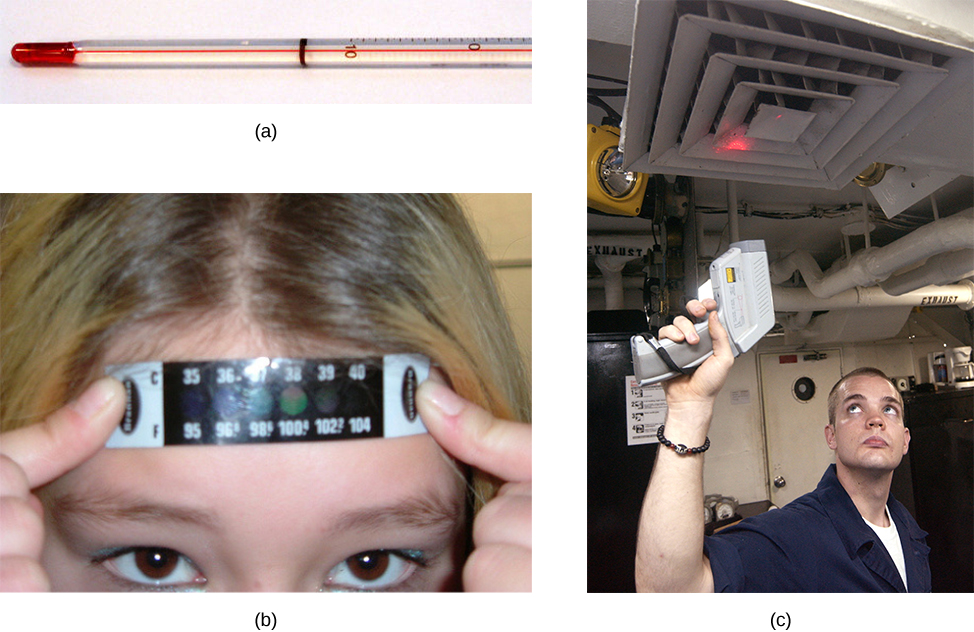 On the Celsius scale, the freezing point of water is

and the boiling point is

The unit of temperature on this scale is the degree Celsius

. The Fahrenheit scale (still the most frequently used for common purposes in the United States) has the freezing point of water at

and the boiling point at

Its unit is the degree Fahrenheit (

The Kelvin scale is the absolute temperature scale that is commonly used in science. The SI temperature unit is the kelvin, which is abbreviated K (not accompanied by a degree sign). Thus 0 K is absolute zero. The freezing and boiling points of water are 273.15 K and 373.15 K, respectively. Therefore, temperature differences are the same in units of kelvins and degrees Celsius, or

The relationships between the three common temperature scales are shown in (Figure). Temperatures on these scales can be converted using the equations in (Figure).

Relationships between the Fahrenheit, Celsius, and Kelvin temperature scales are shown. The relative sizes of the scales are also shown.

To convert between Fahrenheit and Kelvin, convert to Celsius as an intermediate step.

Converting between Temperature Scales: Room Temperature “Room temperature” is generally defined in physics to be

. (a) What is room temperature in

Strategy To answer these questions, all we need to do is choose the correct conversion equations and substitute the known values.

Solution To convert from

Substitute the known value into the equation and solve:

Similarly, we find that

The Kelvin scale is part of the SI system of units, so its actual definition is more complicated than the one given above. First, it is not defined in terms of the freezing and boiling points of water, but in terms of the triple point. The triple point is the unique combination of temperature and pressure at which ice, liquid water, and water vapor can coexist stably. As will be discussed in the section on phase changes, the coexistence is achieved by lowering the pressure and consequently the boiling point to reach the freezing point. The triple-point temperature is defined as 273.16 K. This definition has the advantage that although the freezing temperature and boiling temperature of water depend on pressure, there is only one triple-point temperature.

Second, even with two points on the scale defined, different thermometers give somewhat different results for other temperatures. Therefore, a standard thermometer is required. Metrologists (experts in the science of measurement) have chosen the constant-volume gas thermometer for this purpose. A vessel of constant volume filled with gas is subjected to temperature changes, and the measured temperature is proportional to the change in pressure. Using “TP” to represent the triple point,

The results depend somewhat on the choice of gas, but the less dense the gas in the bulb, the better the results for different gases agree. If the results are extrapolated to zero density, the results agree quite well, with zero pressure corresponding to a temperature of absolute zero.

Constant-volume gas thermometers are big and come to equilibrium slowly, so they are used mostly as standards to calibrate other thermometers.

Visit this site to learn more about the constant-volume gas thermometer.

The reading will change.

Give an example of a physical property that varies with temperature and describe how it is used to measure temperature.

While traveling outside the United States, you feel sick. A companion gets you a thermometer, which says your temperature is 39. What scale is that on? What is your Fahrenheit temperature? Should you seek medical help?

That must be Celsius. Your Fahrenheit temperature is

Yes, it is time to get treatment.

What are the following temperatures on the Kelvin scale?

an indoor temperature sometimes recommended for energy conservation in winter

one of the highest atmospheric temperatures ever recorded on Earth (Death Valley, California, 1913)

the temperature of the surface of the Sun

? (b) Show that any change in temperature in Fahrenheit degrees is nine-fifths the change in Celsius degrees

. We also know that

So, substituting, we have

. Partially solving and rearranging the equation, we have

A person taking a reading of the temperature in a freezer in Celsius makes two mistakes: first omitting the negative sign and then thinking the temperature is Fahrenheit. That is, the person reads

. Oddly enough, the result is the correct Fahrenheit temperature. What is the original Celsius reading? Round your answer to three significant figures.

absolute temperature scale
scale, such as Kelvin, with a zero point that is absolute zero

) unit on the Celsius temperature scale

) unit on the Fahrenheit temperature scale

triple point
pressure and temperature at which a substance exists in equilibrium as a solid, liquid, and gas