Although ac electric power is produced at relatively low voltages, it is sent through transmission lines at very high voltages (as high as 500 kV). The same power can be transmitted at different voltages because power is the product

(For simplicity, we ignore the phase factor

A particular power requirement can therefore be met with a low voltage and a high current or with a high voltage and a low current. The advantage of the high-voltage/low-current choice is that it results in lower

ohmic losses in the transmission lines, which can be significant in lines that are many kilometers long ((Figure)).

The rms voltage from a power plant eventually needs to be stepped down from 12 kV to 240 V so that it can be safely introduced into a home. A high-voltage transmission line allows a low current to be transmitted via a substation over long distances.

Typically, the alternating emfs produced at power plants are “stepped up” to very high voltages before being transmitted through power lines; then, they must be “stepped down” to relatively safe values (110 or 220 V rms) before they are introduced into homes. The device that transforms voltages from one value to another using induction is the transformer ((Figure)).

Transformers are used to step down the high voltages in transmission lines to the 110 to 220 V used in homes. (credit: modification of work by “Fortyseven”/Flickr) 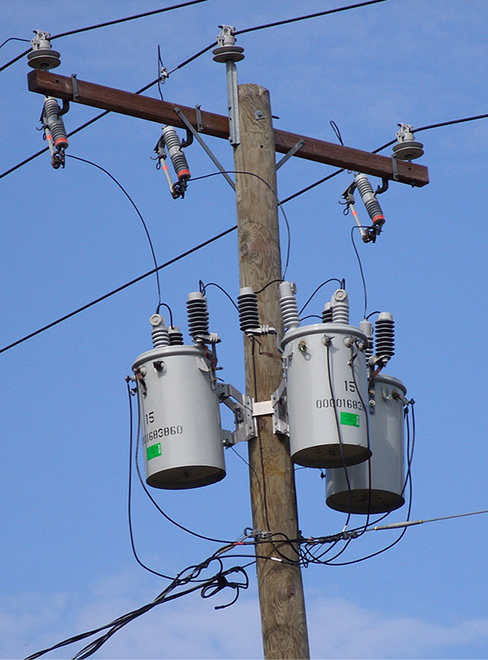 As (Figure) illustrates, a transformer basically consists of two separated coils, or windings, wrapped around a soft iron core. The primary winding has

loops, or turns, and is connected to an alternating voltage

The secondary winding has

turns and is connected to a load resistor

We assume the ideal case for which all magnetic field lines are confined to the core so that the same magnetic flux permeates each turn of both the primary and the secondary windings. We also neglect energy losses to magnetic hysteresis, to ohmic heating in the windings, and to ohmic heating of the induced eddy currents in the core. A good transformer can have losses as low as 1% of the transmitted power, so this is not a bad assumption.

A step-up transformer (more turns in the secondary winding than in the primary winding). The two windings are wrapped around a soft iron core. 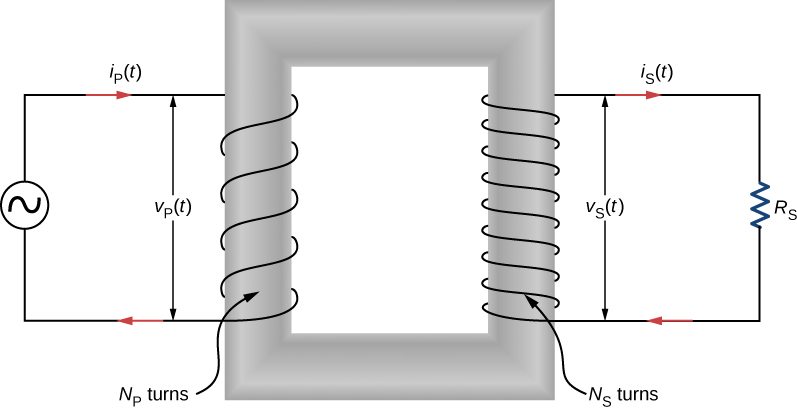 To analyze the transformer circuit, we first consider the primary winding. The input voltage

is the flux through one turn of the primary winding. Thus,

Combining the last two equations, we have

Hence, with appropriate values for

may be “stepped up”

the output voltage. This is often abbreviated as the transformer equation,

From the law of energy conservation, the power introduced at any instant by

to the primary winding must be equal to the power dissipated in the resistor of the secondary circuit; thus,

When combined with (Figure), this gives

If the voltage is stepped up, the current is stepped down, and vice versa.

Finally, we can use

, along with (Figure) and (Figure), to obtain

which tells us that the input voltage

“sees” not a resistance

but rather a resistance

. (d) What would the power loss have been if the transmission line was at 240 V the entire length of the line, rather than providing voltage at 12 kV? What does this say about transmission lines?

Strategy The number of turns related to the voltages is found from (Figure). The output current is calculated using (Figure).

Significance This application of a step-down transformer allows a home that uses 240-V outlets to have 100 A available to draw upon. This can power many devices in the home.

There is less thermal loss if the transmission lines operate at low currents and high voltages.

How can you distinguish the primary winding from the secondary winding in a step-up transformer?

Battery packs in some electronic devices are charged using an adapter connected to a wall socket. Speculate as to the purpose of the adapter.

The adapter has a step-down transformer to have a lower voltage and possibly higher current at which the device can operate.

Will a transformer work if the input is a dc voltage?

Why are the primary and secondary coils of a transformer wrapped around the same closed loop of iron?

so each loop can experience the same changing magnetic flux

A step-up transformer connected to a 110-V line is used to supply a hydrogen-gas discharge tube with 5.0 kV (rms). The tube dissipates 75 W of power. (a) What is the ratio of the number of turns in the secondary winding to the number of turns in the primary winding? (b) What are the rms currents in the primary and secondary windings? (c) What is the effective resistance seen by the 110-V source?

The emf of an ac source is given by

A 20-mH inductor is connected across an AC source with a variable frequency and a constant-voltage amplitude of 9.0 V. (a) Determine the reactance of the circuit and the maximum current through the inductor when the frequency is set at 20 kHz. (b) Do the same calculations for a frequency of 60 Hz.

What is the impedance of an RLC series circuit at the resonant frequency?

What is the resistance R in the circuit shown below if the amplitude of the ac through the inductor is 4.24 A? 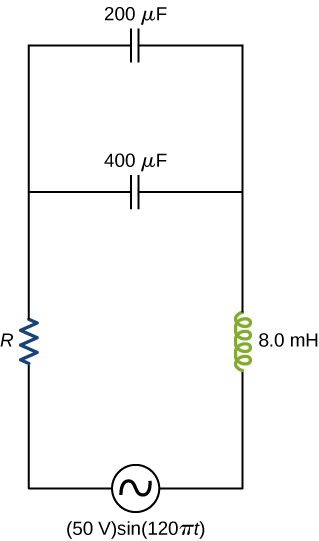 An ac source of voltage amplitude 100 V and frequency 1.0 kHz drives an RLC series circuit with

In an RLC series circuit,

. What is the power output of the source?

Consider a power plant located 25 km outside a town delivering 50 MW of power to the town. The transmission lines are made of aluminum cables with a

. (a) What voltage is induced in the secondary winding? (b) What is unreasonable about this result? (c) Which assumption or premise is responsible?

a. 335 MV; b. the result is way too high, well beyond the breakdown voltage of air over reasonable distances; c. the input voltage is too high 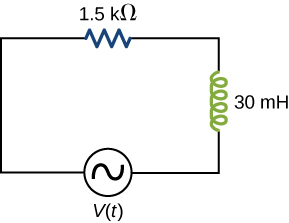 capacitor, and 2.5-H inductor are connected in series with an ac source of amplitude 10 V and variable angular frequency

. (a) What is the value of the resonance frequency

? (b) What is the amplitude of the current if

? (c) What is the phase constant of the current when

? Is it leading or lagging the source voltage, or is it in phase? (d) Write an equation for the voltage drop across the resistor as a function of time when

. (e) What is the power factor of the circuit when

and has a mismatch with a low-impedance

loudspeaker. You are asked to insert an appropriate transformer to match the impedances. What turns ratio will you use, and why? Use the simplified circuit shown below. 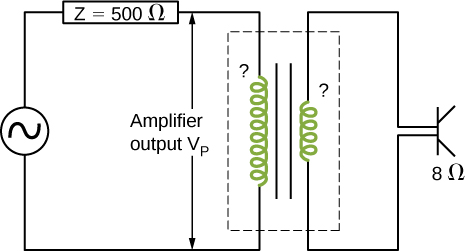 The units as written for inductive reactance (Figure) are

. Radians can be ignored in unit analysis. The Henry can be defined as

. Combining these together results in a unit of

is connected to an ac source whose frequency can be varied. At what frequency will the voltage across the coil lead the current through the coil by

An RLC series circuit consists of a

capacitor, and a 120-mH inductor whose coil has a resistance of

. The source for the circuit has an rms emf of 240 V at a frequency of 60 Hz. Calculate the rms voltages across the (a) resistor, (b) capacitor, and (c) inductor.

An RLC series circuit consists of a

capacitor, and a 50-mH inductor. A 110-V (rms) source of variable frequency is connected across the combination. What is the power output of the source when its frequency is set to one-half the resonant frequency of the circuit?

Shown below are two circuits that act as crude high-pass filters. The input voltage to the circuits is

, and the output voltage is

(a) Show that for the capacitor circuit,

and for the inductor circuit,

(b) Show that for high frequencies,

but for low frequencies, 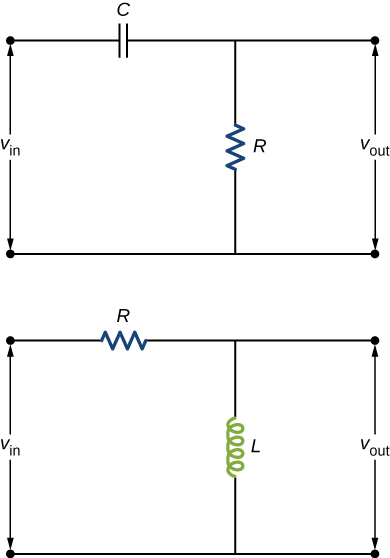 The two circuits shown below act as crude low-pass filters. The input voltage to the circuits is

, and the output voltage is

(a) Show that for the capacitor circuit,

and for the inductor circuit,

(b) Show that for low frequencies,

but for high frequencies, 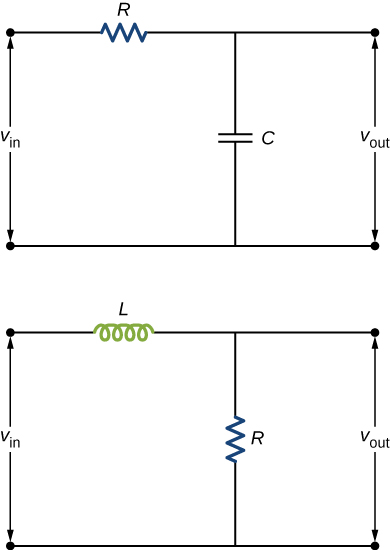