Beginning in this section, we study crystalline solids, which consist of atoms arranged in an extended regular pattern called a lattice. Solids that do not or are unable to form crystals are classified as amorphous solids. Although amorphous solids (like glass) have a variety of interesting technological applications, the focus of this chapter will be on crystalline solids.

Atoms arrange themselves in a lattice to form a crystal because of a net attractive force between their constituent electrons and atomic nuclei. The crystals formed by the bonding of atoms belong to one of three categories, classified by their bonding: ionic, covalent, and metallic. Molecules can also bond together to form crystals; these bonds, not discussed here, are classified as molecular. Early in the twentieth century, the atomic model of a solid was speculative. We now have direct evidence of atoms in solids ((Figure)).

An image made with a scanning tunneling microscope of the surface of graphite. The peaks represent the atoms, which are arranged in hexagons. The scale is in angstroms. 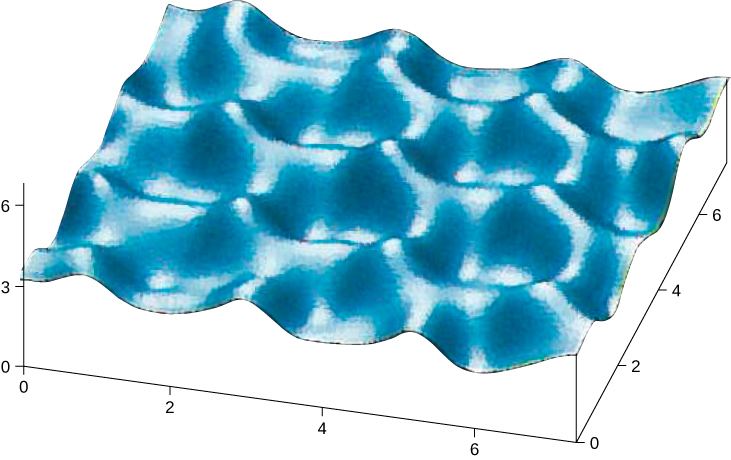 Many solids form by ionic bonding. A prototypical example is the sodium chloride crystal, as we discussed earlier. Electrons transfer from sodium atoms to adjacent chlorine atoms, since the valence electrons in sodium are loosely bound and chlorine has a large electron affinity. The positively charged sodium ions and negatively charged chlorine (chloride) ions organize into an extended regular array of atoms ((Figure)).

Structure of the sodium chloride crystal. The sodium and chloride ions are arranged in a face-centered cubic (FCC) structure. 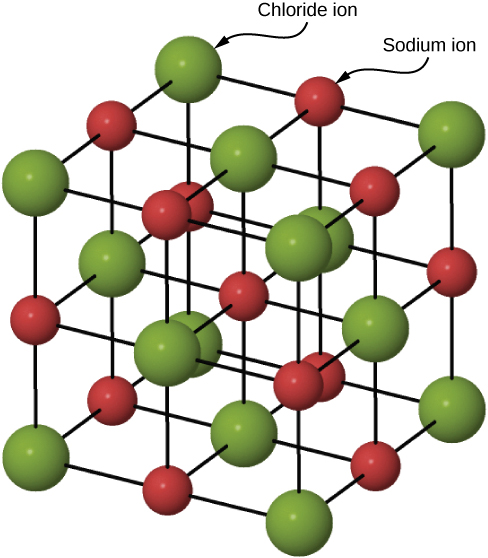 The charge distributions of the sodium and chloride ions are spherically symmetric, and the chloride ion is about two times the diameter of the sodium ion. The lowest energy arrangement of these ions is called the face-centered cubic (FCC) structure. In this structure, each ion is closest to six ions of the other species. The unit cell is a cube—an atom occupies the center and corners of each “face” of the cube. The attractive potential energy of the

ion due to the fields of these six

where the minus sign designates an attractive potential (and we identify

are its next-nearest neighbors: twelve

ions of the same charge. The total repulsive potential energy associated with these ions is

Next closest are eight

ion. The potential energy of the

ion in the field of these eight ions is

Continuing in the same manner with alternate sets of

ions, we find that the net attractive potential energy

ion can be written as

is the Madelung constant, introduced earlier. From this analysis, we can see that this constant is the infinite converging sum

Distant ions make a significant contribution to this sum, so it converges slowly, and many terms must be used to calculate

accurately. For all FCC ionic solids,

Other possible packing arrangements of atoms in solids include simple cubic and body-centered cubic (BCC). These three different packing structures of solids are compared in (Figure). The first row represents the location, but not the size, of the ions; the second row indicates the unit cells of each structure or lattice; and the third row represents the location and size of the ions. The BCC structure has eight nearest neighbors, with a Madelung constant of about 1.76—only slightly different from that for the FCC structure. Determining the Madelung constant for specific solids is difficult work and the subject of current research.

Packing structures for solids from left to right: (a) simple cubic, (b) body-centered cubic (BCC), and (c) face-centered cubic (FCC). Each crystal structure minimizes the energy of the system. 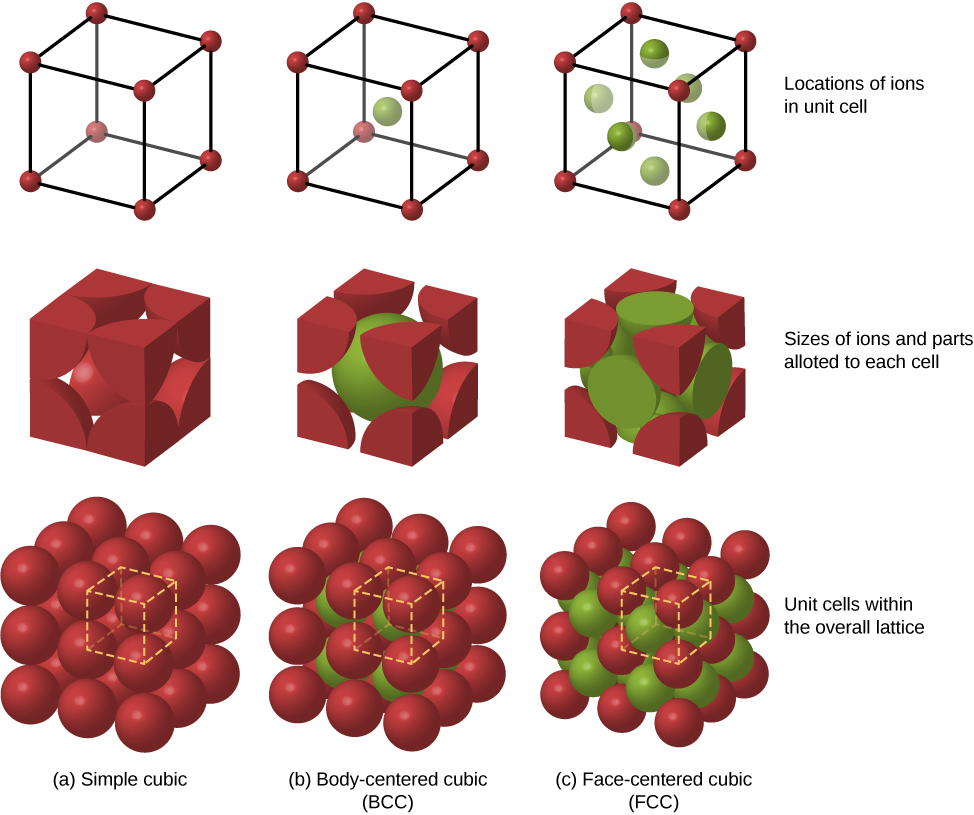 The energy of the sodium ions is not entirely due to attractive forces between oppositely charged ions. If the ions are bought too close together, the wave functions of core electrons of the ions overlap, and the electrons repel due to the exclusion principle. The total potential energy of the

ion is therefore the sum of the attractive Coulomb potential

and the repulsive potential associated with the exclusion principle

Calculating this repulsive potential requires powerful computers. Fortunately, however, this energy can be described accurately by a simple formula that contains adjustable parameters:

where the parameters A and n are chosen to give predictions consistent with experimental data. For the problem at the end of this chapter, the parameter n is referred to as the repulsion constant. The total potential energy of the

At equilibrium, there is no net force on the ion, so the distance between neighboring

ions must be the value

for which U is a minimum. Setting

Inserting this expression into the expression for the total potential energy, we have

Notice that the total potential energy now has only one adjustable parameter, n. The parameter A has been replaced by a function involving

, the equilibrium separation distance, which can be measured by a diffraction experiment (you learned about diffraction in a previous chapter). The total potential energy is plotted in (Figure) for

, the approximate value of n for NaCl.

. The equilibrium bond length occurs when the energy is a minimized. 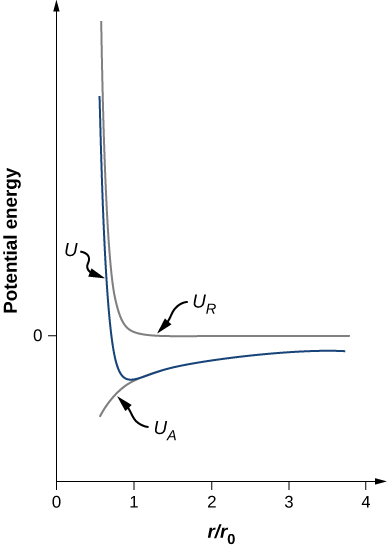 , the curve for U has the same general shape: U approaches infinity as

and U approaches zero as

. The minimum value of the potential energy is given by

Thus, we can determine the Madelung constant from the crystal structure and n from the lattice energy. For NaCl, we have

This dissociation energy is relatively large. The most energetic photon from the visible spectrum, for example, has an energy of approximately

Because the ions in crystals are so tightly bound, ionic crystals have the following general characteristics:

The Dissociation Energy of Salt Determine the dissociation energy of sodium chloride (NaCl) in kJ/mol. (Hint: The repulsion constant n of NaCl is approximately 8.)

. The relationship between these quantities is

where M is the mass of one mole of salt,

is Avogadro’s number, and

is the equilibrium separation distance. The factor 2 is needed since both the sodium and chloride ions represent a cubic volume

. Solving for the distance, we get

The potential energy of one ion pair

is the Madelung constant,

is the equilibrium separation distance, and n is the repulsion constant. NaCl is FCC, so the Madelung constant is

Substituting these values, we get

The dissociation energy of one mole of sodium chloride is therefore

Significance This theoretical value of the dissociation energy of 766 kJ/mol is close to the accepted experimental value of 787 kJ/mol. Notice that for larger density, the equilibrium separation distance between ion pairs is smaller, as expected. This small separation distance drives up the force between ions and therefore the dissociation energy. The conversion at the end of the equation took advantage of the conversion factor

Check Your Understanding If the dissociation energy were larger, would that make it easier or more difficult to break the solid apart?

Crystals can also be formed by covalent bonding. For example, covalent bonds are responsible for holding carbon atoms together in diamond crystals. The electron configuration of the carbon atom is

—a He core plus four valence electrons. This electron configuration is four electrons short of a full shell, so by sharing these four electrons with other carbon atoms in a covalent bond, the shells of all carbon atoms are filled. Diamond has a more complicated structure than most ionic crystals ((Figure)). Each carbon atom is the center of a regular tetrahedron, and the angle between the bonds is

This angle is a direct consequence of the directionality of the p orbitals of carbon atoms.

Structure of the diamond crystal. (a) The single carbon atom represented by the dark blue sphere is covalently bonded to the four carbon atoms represented by the light blue spheres. (b) Gem-quality diamonds can be cleaved along smooth planes, which gives a large number of angles that cause total internal reflection of incident light, and thus gives diamonds their prized brilliance.

Covalently bonded crystals are not as uniform as ionic crystals but are reasonably hard, difficult to melt, and are insoluble in water. For example, diamond has an extremely high melting temperature (4000 K) and is transparent to visible light. In comparison, covalently bonded tin (also known as alpha-tin, which is nonmetallic) is relatively soft, melts at 600 K, and reflects visible light. Two other important examples of covalently bonded crystals are silicon and germanium. Both of these solids are used extensively in the manufacture of diodes, transistors, and integrated circuits. We will return to these materials later in our discussion of semiconductors.

As the name implies, metallic bonding is responsible for the formation of metallic crystals. The valence electrons are essentially free of the atoms and are able to move relatively easily throughout the metallic crystal. Bonding is due to the attractive forces between the positive ions and the conduction electrons. Metallic bonds are weaker than ionic or covalent bonds, with dissociation energies in the range

Why is the equilibrium separation distance between

different for a diatomic molecule than for solid KCl?

Each ion is in the field of multiple ions of the other opposite charge.

In sodium chloride, how many

In cesium iodide, how many

The NaCl crystal structure is FCC. The equilibrium spacing is

. If each ion occupies a cubic volume of

, estimate the distance between “nearest neighbor”

The CsI crystal structure is BCC. The equilibrium spacing is approximately

ion occupies a cubic volume of

, what is the distance of this ion to its “nearest neighbor”

The potential energy of a crystal is

/ion pair. Find the dissociation energy for four moles of the crystal.

The measured density of a NaF crystal is

. What is the equilibrium separate distance of

What value of the repulsion constant, n, gives the measured dissociation energy of 221 kcal/mole for NaF?

The measured density of a KCl crystal is

What is the equilibrium separation distance of

What value of the repulsion constant, n, gives the measured dissociation energy of 171 kcal/mol for KCl?

The measured density of a CsCl crystal is

. What is the equilibrium separate distance of

lattice
regular array or arrangement of atoms into a crystal structure