Everyone enjoys the spectacle of a rainbow glimmering against a dark stormy sky. How does sunlight falling on clear drops of rain get broken into the rainbow of colors we see? The same process causes white light to be broken into colors by a clear glass prism or a diamond ((Figure)).

We see about six colors in a rainbow—red, orange, yellow, green, blue, and violet; sometimes indigo is listed, too. These colors are associated with different wavelengths of light, as shown in (Figure). When our eye receives pure-wavelength light, we tend to see only one of the six colors, depending on wavelength. The thousands of other hues we can sense in other situations are our eye’s response to various mixtures of wavelengths. White light, in particular, is a fairly uniform mixture of all visible wavelengths. Sunlight, considered to be white, actually appears to be a bit yellow, because of its mixture of wavelengths, but it does contain all visible wavelengths. The sequence of colors in rainbows is the same sequence as the colors shown in the figure. This implies that white light is spread out in a rainbow according to wavelength. Dispersion is defined as the spreading of white light into its full spectrum of wavelengths. More technically, dispersion occurs whenever the propagation of light depends on wavelength.

Even though rainbows are associated with six colors, the rainbow is a continuous distribution of colors according to wavelengths.

Any type of wave can exhibit dispersion. For example, sound waves, all types of electromagnetic waves, and water waves can be dispersed according to wavelength. Dispersion may require special circumstances and can result in spectacular displays such as in the production of a rainbow. This is also true for sound, since all frequencies ordinarily travel at the same speed. If you listen to sound through a long tube, such as a vacuum cleaner hose, you can easily hear it dispersed by interaction with the tube. Dispersion, in fact, can reveal a great deal about what the wave has encountered that disperses its wavelengths. The dispersion of electromagnetic radiation from outer space, for example, has revealed much about what exists between the stars—the so-called interstellar medium.

Refraction is responsible for dispersion in rainbows and many other situations. The angle of refraction depends on the index of refraction, as we know from Snell’s law. We know that the index of refraction n depends on the medium. But for a given medium, n also depends on wavelength ((Figure)). Note that for a given medium, n increases as wavelength decreases and is greatest for violet light. Thus, violet light is bent more than red light, as shown for a prism in (Figure)(b). White light is dispersed into the same sequence of wavelengths as seen in (Figure) and (Figure). 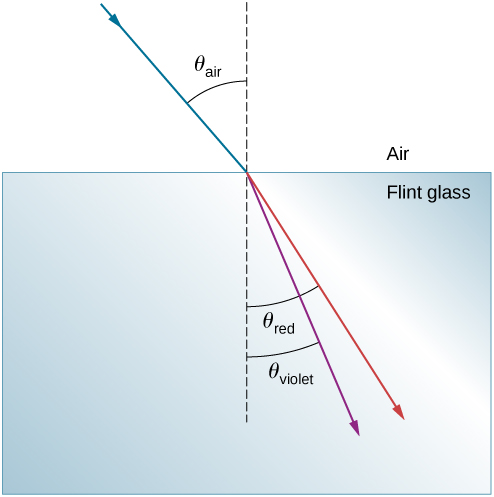 Strategy Values for the indices of refraction for flint glass at various wavelengths are listed in (Figure). Use these values for calculate the angle of refraction for each color and then take the difference to find the dispersion angle.

we can solve for the angle of refraction as

Similarly, the angle of incidence for the violet part of the beam is

The difference between these two angles is

may seem like a negligibly small angle, if this beam is allowed to propagate a long enough distance, the dispersion of colors becomes quite noticeable.

Check Your Understanding In the preceding example, how much distance inside the block of flint glass would the red and the violet rays have to progress before they are separated by 1.0 mm?

Rainbows are produced by a combination of refraction and reflection. You may have noticed that you see a rainbow only when you look away from the Sun. Light enters a drop of water and is reflected from the back of the drop ((Figure)). The light is refracted both as it enters and as it leaves the drop. Since the index of refraction of water varies with wavelength, the light is dispersed, and a rainbow is observed ((Figure)(a)). (No dispersion occurs at the back surface, because the law of reflection does not depend on wavelength.) The actual rainbow of colors seen by an observer depends on the myriad rays being refracted and reflected toward the observer’s eyes from numerous drops of water. The effect is most spectacular when the background is dark, as in stormy weather, but can also be observed in waterfalls and lawn sprinklers. The arc of a rainbow comes from the need to be looking at a specific angle relative to the direction of the Sun, as illustrated in part (b). If two reflections of light occur within the water drop, another “secondary” rainbow is produced. This rare event produces an arc that lies above the primary rainbow arc, as in part (c), and produces colors in the reverse order of the primary rainbow, with red at the lowest angle and violet at the largest angle.

A ray of light falling on this water drop enters and is reflected from the back of the drop. This light is refracted and dispersed both as it enters and as it leaves the drop. 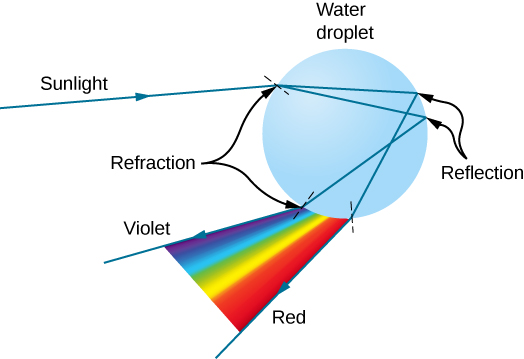 (a) Different colors emerge in different directions, and so you must look at different locations to see the various colors of a rainbow. (b) The arc of a rainbow results from the fact that a line between the observer and any point on the arc must make the correct angle with the parallel rays of sunlight for the observer to receive the refracted rays. (c) Double rainbow. (credit c: modification of work by “Nicholas”/Wikimedia Commons)

Dispersion may produce beautiful rainbows, but it can cause problems in optical systems. White light used to transmit messages in a fiber is dispersed, spreading out in time and eventually overlapping with other messages. Since a laser produces a nearly pure wavelength, its light experiences little dispersion, an advantage over white light for transmission of information. In contrast, dispersion of electromagnetic waves coming to us from outer space can be used to determine the amount of matter they pass through.

Is it possible that total internal reflection plays a role in rainbows? Explain in terms of indices of refraction and angles, perhaps referring to that shown below. Some of us have seen the formation of a double rainbow; is it physically possible to observe a triple rainbow? 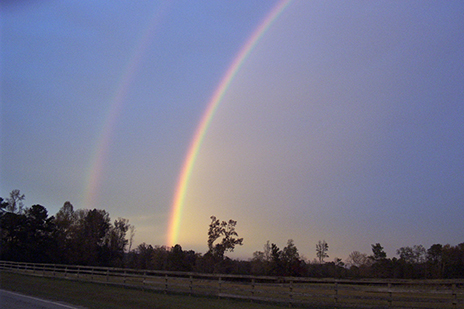 A high-quality diamond may be quite clear and colorless, transmitting all visible wavelengths with little absorption. Explain how it can sparkle with flashes of brilliant color when illuminated by white light.

In addition to total internal reflection, rays that refract into and out of diamond crystals are subject to dispersion due to varying values of n across the spectrum, resulting in a sparkling display of colors.

(a) What is the ratio of the speed of red light to violet light in diamond, based on (Figure)? (b) What is this ratio in polystyrene? (c) Which is more dispersive?

By how much do the critical angles for red (660 nm) and violet (410 nm) light differ in a diamond surrounded by air?

(a) A narrow beam of light containing yellow (580 nm) and green (550 nm) wavelengths goes from polystyrene to air, striking the surface at a

incident angle. What is the angle between the colors when they emerge? (b) How far would they have to travel to be separated by 1.00 mm?

A parallel beam of light containing orange (610 nm) and violet (410 nm) wavelengths goes from fused quartz to water, striking the surface between them at a

incident angle. What is the angle between the two colors in water?

. At what incident angle must 470 nm light enter flint glass to have the same angle of refraction?

A narrow beam of light containing red (660 nm) and blue (470 nm) wavelengths travels from air through a 1.00-cm-thick flat piece of crown glass and back to air again. The beam strikes at a

incident angle. (a) At what angles do the two colors emerge? (b) By what distance are the red and blue separated when they emerge?

incident angle, as shown below. At what angles, 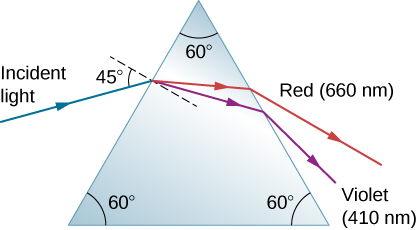 dispersion
spreading of light into its spectrum of wavelengths