You only have to look as far as the nearest bathroom to find an example of an image formed by a mirror. Images in a plane mirror are the same size as the object, are located behind the mirror, and are oriented in the same direction as the object (i.e., “upright”).

To understand how this happens, consider (Figure). Two rays emerge from point P, strike the mirror, and reflect into the observer’s eye. Note that we use the law of reflection to construct the reflected rays. If the reflected rays are extended backward behind the mirror (see dashed lines in (Figure)), they seem to originate from point Q. This is where the image of point P is located. If we repeat this process for point

, we obtain its image at point

. You should convince yourself by using basic geometry that the image height (the distance from Q to

). By forming images of all points of the object, we obtain an upright image of the object behind the mirror.

Two light rays originating from point P on an object are reflected by a flat mirror into the eye of an observer. The reflected rays are obtained by using the law of reflection. Extending these reflected rays backward, they seem to come from point Q behind the mirror, which is where the virtual image is located. Repeating this process for point

. The image height is thus the same as the object height, the image is upright, and the object distance

is the same as the image distance 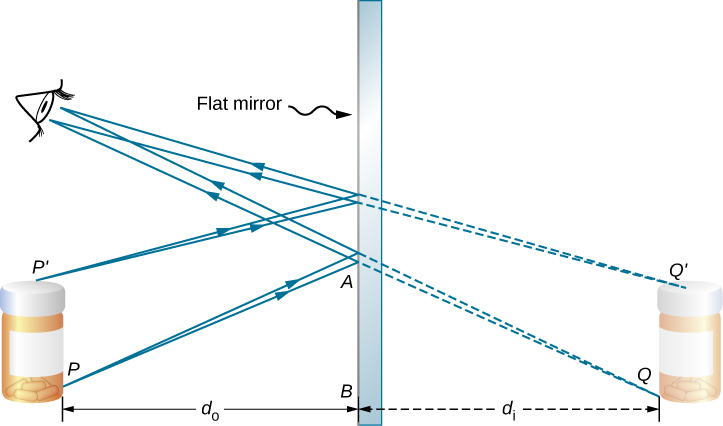 Locating an Image in a Plane Mirror

) is the distance from the mirror to the object (or, more generally, from the center of the optical element that creates its image). Similarly, the image distance (denoted

If an object is situated in front of two mirrors, you may see images in both mirrors. In addition, the image in the first mirror may act as an object for the second mirror, so the second mirror may form an image of the image. If the mirrors are placed parallel to each other and the object is placed at a point other than the midpoint between them, then this process of image-of-an-image continues without end, as you may have noticed when standing in a hallway with mirrors on each side. This is shown in (Figure), which shows three images produced by the blue object. Notice that each reflection reverses front and back, just like pulling a right-hand glove inside out produces a left-hand glove (this is why a reflection of your right hand is a left hand). Thus, the fronts and backs of images 1 and 2 are both inverted with respect to the object, and the front and back of image 3 is inverted with respect to image 2, which is the object for image 3.

Two parallel mirrors can produce, in theory, an infinite number of images of an object placed off center between the mirrors. Three of these images are shown here. The front and back of each image is inverted with respect to its object. Note that the colors are only to identify the images. For normal mirrors, the color of an image is essentially the same as that of its object.

You may have noticed that image 3 is smaller than the object, whereas images 1 and 2 are the same size as the object. The ratio of the image height with respect to the object height is called magnification. More will be said about magnification in the next section.

Infinite reflections may terminate. For instance, two mirrors at right angles form three images, as shown in part (a) of (Figure). Images 1 and 2 result from rays that reflect from only a single mirror, but image 1,2 is formed by rays that reflect from both mirrors. This is shown in the ray-tracing diagram in part (b) of (Figure). To find image 1,2, you have to look behind the corner of the two mirrors.

What are the differences between real and virtual images? How can you tell (by looking) whether an image formed by a single lens or mirror is real or virtual?

Virtual image cannot be projected on a screen. You cannot distinguish a real image from a virtual image simply by judging from the image perceived with your eye.

Can you see a virtual image? Explain your response.

Can you photograph a virtual image?

Can you project a virtual image onto a screen?

Is it necessary to project a real image onto a screen to see it?

Devise an arrangement of mirrors allowing you to see the back of your head. What is the minimum number of mirrors needed for this task?

If you wish to see your entire body in a flat mirror (from head to toe), how tall should the mirror be? Does its size depend upon your distance away from the mirror? Provide a sketch.

The mirror should be half your size and its top edge should be at the level of your eyes. The size does not depend on your distance from the mirror.

. An object is placed on the bisector between the mirrors. Construct a ray diagram as in (Figure) to show how many images are formed.

. An object is placed on the bisector between the mirrors. Construct a ray diagram as in (Figure) to show how many images are formed. 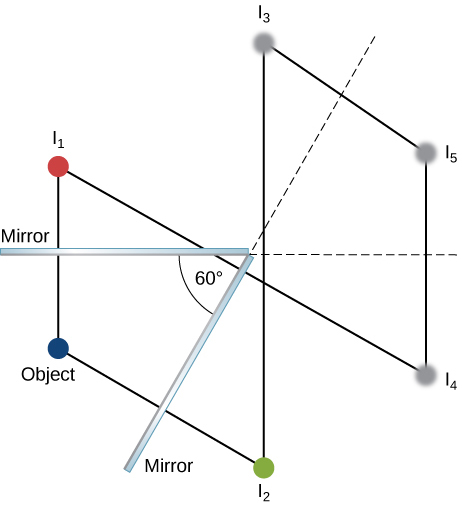 By using more than one flat mirror, construct a ray diagram showing how to create an inverted image.

virtual image
image that cannot be projected on a screen because the rays do not physically go through the image, they only appear to originate from the image