To calculate the intensity of the diffraction pattern, we follow the phasor method used for calculations with ac circuits in Alternating-Current Circuits. If we consider that there are N Huygens sources across the slit shown in (Figure), with each source separated by a distance D/N from its adjacent neighbors, the path difference between waves from adjacent sources reaching the arbitrary point P on the screen is

This distance is equivalent to a phase difference of

is shown in (Figure). The amplitude of the phasor for each Huygens wavelet is

the amplitude of the resultant phasor is E, and the phase difference between the wavelets from the first and the last sources is

, the phasor diagram approaches a circular arc of length

and radius r. Since the length of the arc is

, the radius r of the arc must decrease as

increases (or equivalently, as the phasors form tighter spirals).

(a) Phasor diagram corresponding to the angular position

in the single-slit diffraction pattern. The phase difference between the wavelets from the first and last sources is

. (b) The geometry of the phasor diagram. 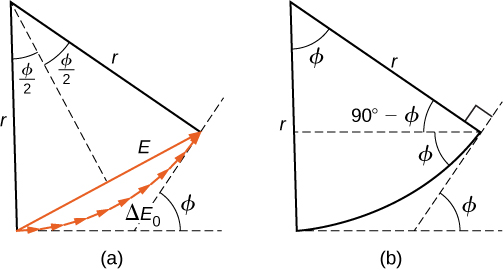 The phasor diagram for

. In this case, the phasors are laid end to end in a straight line of length

the radius r goes to infinity, and the resultant has its maximum value

The intensity of the light can be obtained using the relation

from Electromagnetic Waves. The intensity of the maximum is then

. The phasor diagrams for the first two zeros of the diffraction pattern are shown in parts (b) and (d) of the figure. In both cases, the phasors add to zero, after rotating through 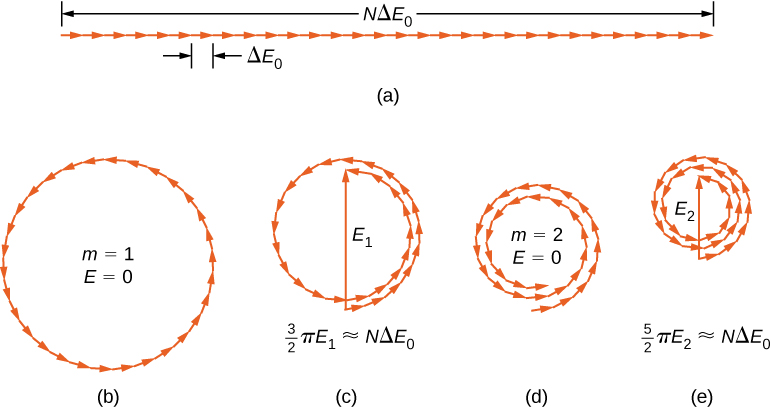 The next two maxima beyond the central maxima are represented by the phasor diagrams of parts (c) and (e). In part (c), the phasors have rotated through

rad and have formed a resultant phasor of magnitude

. The length of the arc formed by the phasors is

Since this corresponds to 1.5 rotations around a circle of diameter

In part (e), the phasors have rotated through

rad, corresponding to 2.5 rotations around a circle of diameter

. The proof is left as an exercise for the student ((Figure)).

These two maxima actually correspond to values of

rad. Since the total length of the arc of the phasor diagram is always

the radius of the arc decreases as

increases. As a result,

rad, respectively. The exact values of

for the maxima are investigated in (Figure). In solving that problem, you will find that they are less than, but very close to,

To calculate the intensity at an arbitrary point P on the screen, we return to the phasor diagram of (Figure). Since the arc subtends an angle

at the center of the circle,

where E is the amplitude of the resultant field. Solving the second equation for E and then substituting r from the first equation, we find

at the central maximum. The intensity is proportional to the square of the amplitude, so

is the intensity at the center of the pattern.

For the central maximum,

For the next maximum,

rad and when substituted into (Figure), it yields

in agreement with what we found earlier in this section using the diameters and circumferences of phasor diagrams. Substituting

rad into (Figure) yields a similar result for

A plot of (Figure) is shown in (Figure) and directly below it is a photograph of an actual diffraction pattern. Notice that the central peak is much brighter than the others, and that the zeros of the pattern are located at those points where

rad. This corresponds to 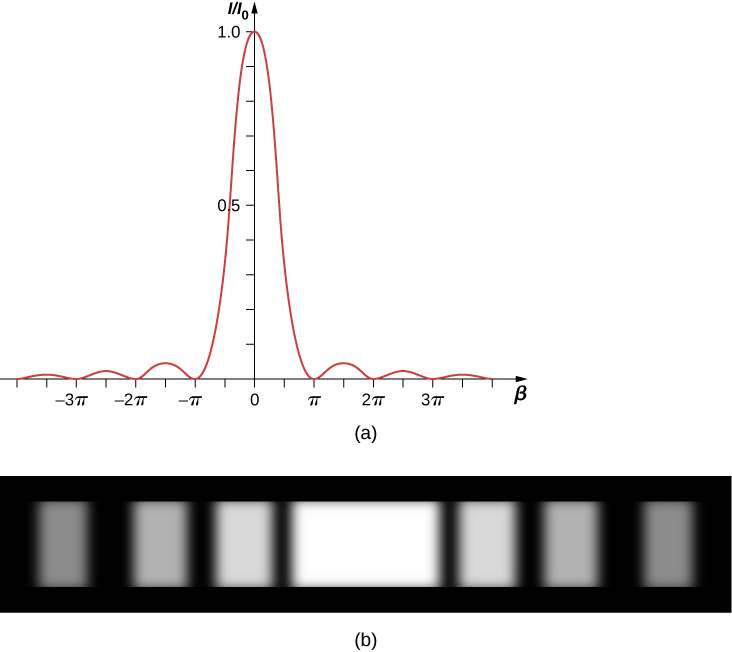 Strategy The minima are given by (Figure),

. The first two minima are for

(Figure) and (Figure) can be used to determine the intensity once the angle has been worked out.

From (Figure), we can calculate

Significance This position, halfway between two minima, is very close to the location of the maximum, expected near

Check Your Understanding For the experiment in (Figure), at what angle from the center is the third maximum and what is its intensity relative to the central maximum?

If the slit width D is varied, the intensity distribution changes, as illustrated in (Figure). The central peak is distributed over the region from

, this corresponds to an angular width

the central peak is very sharp, whereas if

, it becomes quite broad.

, the width of the central peak decreases as the angles for the first minima decrease as predicted by (Figure).

A diffraction experiment in optics can require a lot of preparation but this simulation by Andrew Duffy offers not only a quick set up but also the ability to change the slit width instantly. Run the simulation and select “Single slit.” You can adjust the slit width and see the effect on the diffraction pattern on a screen and as a graph.

In (Figure), the parameter

looks like an angle but is not an angle that you can measure with a protractor in the physical world. Explain what

is the arc angle shown in the phasor diagram in (Figure). The phase difference between the first and last Huygens wavelet across the single slit is

and is related to the curvature of the arc that forms the resultant phasor that determines the light intensity.

A single slit of width

is illuminated by a sodium yellow light of wavelength 589 nm. Find the intensity at a

angle to the axis in terms of the intensity of the central maximum.

A single slit of width 0.1 mm is illuminated by a mercury light of wavelength 576 nm. Find the intensity at a

angle to the axis in terms of the intensity of the central maximum.

Consider the single-slit diffraction pattern for

width of the central peak
angle between the minimum for