An important step to answering these questions is to understand particles and their interactions. Particle interactions are expressed in terms of four fundamental forces. In order of decreasing strength, these forces are the strong nuclear force, the electromagnetic force, the weak nuclear force, and the gravitational force.

The fundamental forces may not be truly “fundamental” but may actually be different aspects of the same force. Just as the electric and magnetic forces were unified into an electromagnetic force, physicists in the 1970s unified the electromagnetic force with the weak nuclear force into an electroweak force. Any scientific theory that attempts to unify the electroweak force and strong nuclear force is called a grand unified theory, and any theory that attempts to unify all four forces is called a theory of everything. We will return to the concept of unification later in this chapter.

A large number of subatomic particles exist in nature. These particles can be classified in two ways: the property of spin and participation in the four fundamental forces. Recall that the spin of a particle is analogous to the rotation of a macroscopic object about its own axis. These types of classification are described separately below.

Particles of matter can be divided into fermions and bosons. Fermions have half-integral spin

and bosons have integral spin

The behavior of fermions and bosons in groups can be understood in terms of the property of indistinguishability. Particles are said to be “indistinguishable” if they are identical to one another. For example, electrons are indistinguishable because every electron in the universe has exactly the same mass and spin as all other electrons—“when you’ve seen one electron, you’ve seen them all.” If you switch two indistinguishable particles in the same small region of space, the square of the wave function that describes this system and can be measured

is unchanged. If this were not the case, we could tell whether or not the particles had been switched and the particle would not be truly indistinguishable. Fermions and bosons differ by whether the sign of the wave function (

Fermions are said to be “antisymmetric on exchange” and bosons are “symmetric on exchange.” Pauli’s exclusion principle is a consequence of exchange symmetry of fermions—a connection developed in a more advanced course in modern physics. The electronic structure of atoms is predicated on Pauli’s exclusion principle and is therefore directly related to the indistinguishability of electrons.

Fermions can be further divided into quarks and leptons. The primary difference between these two types of particles is that quarks interact via the strong force and leptons do not. Quarks and leptons (as well as bosons to be discussed later) are organized in (Figure). The upper two rows (first three columns in purple) contain six quarks. These quarks are arranged into two particle families: up, charm, and top (u, c, t), and down, strange, and bottom (d, s, b). Members of the same particle family share the same properties but differ in mass (given in

The families of subatomic particles, categorized by the types of forces with which they interact. (credit: modification of work by “MissMJ”/Wikimedia Commons) 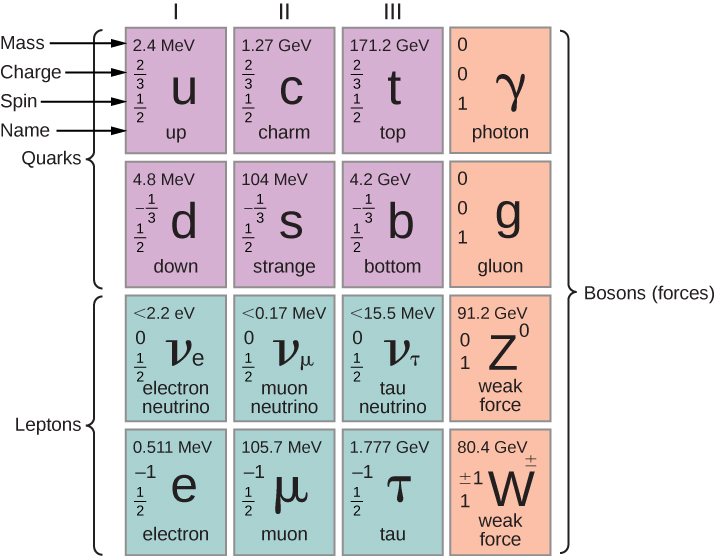 Ordinary matter consists of two types of quarks: the up quark (elementary charge,

) and the down quark

Heavier quarks are unstable and quickly decay to lighter ones via the weak force. Quarks bind together in groups of twos and threes called hadrons via the strong force. Hadrons that consist of two quarks are called mesons, and those that consist of three quarks are called baryons. Examples of mesons include the pion and kaon, and examples of baryons include the familiar proton and neutron. A proton is two up quarks and a down quark

and a neutron is one up quark and two down quarks (

). Properties of sample mesons and baryons are given in (Figure). Quarks participate in all four fundamental forces: strong, weak, electromagnetic, and gravitational.

Bosons (shown in red) are the force carriers of the fermions. In this model, leptons and quarks interact with each other by sending and receiving bosons. For example, Coulombic interaction occurs when two positively charged particles send and receive (exchange) photons. The photons are said to “carry” the force between charged particles. Likewise, attraction between two quarks in an atomic nucleus occurs when two quarks send and receive gluons. Additional examples include W and Z bosons (which carry weak nuclear force) and gravitons (which carry gravitational force). The Higgs boson is a special particle: When it interacts with other particles, it endows them not with force but with mass. In other words, the Higgs boson helps to explains why particles have mass. These assertions are part of a tentative but very productive scientific model (the Standard Model) discussed later.

In the late 1920s, the special theory of relativity and quantum mechanics were combined into a relativistic quantum theory of the electron. A surprising result of this theory was the prediction of two energy states for each electron: One is associated with the electron, and the other is associated with another particle with the same mass of an electron but with a charge of

. This particle is called the antielectron or positron. The positron was discovered experimentally in the 1930s.

Soon it was discovered that for every particle in nature, there is a corresponding antiparticle. An antiparticle has the same mass and lifetime as its associated particle, and the opposite sign of electric charge. These particles are produced in high-energy reactions. Examples of high-energy particles include the antimuon (

(Note that antiparticles for quarks are designated with an over-bar.) Many mesons and baryons contain antiparticles. For example, the antiproton (

and the positively charged pion

. Some neutral particles, such as the photon and the

The same forces that hold ordinary matter together also hold antimatter together. Under the right conditions, it is possible to create antiatoms such as antihydrogen, antioxygen, and even antiwater. In antiatoms, positrons orbit a negatively charged nucleus of antiprotons and antineutrons. (Figure) compares atoms and antiatoms. 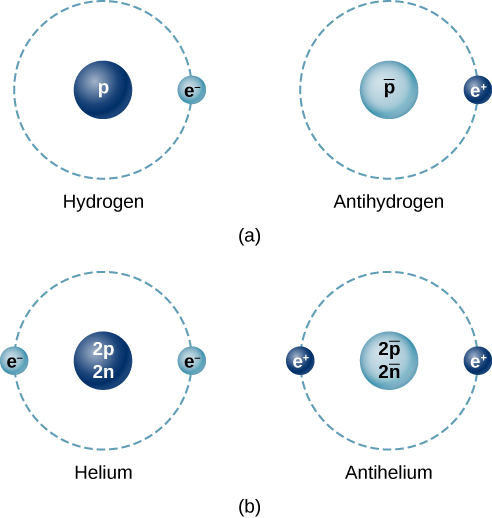 Antimatter cannot exist for long in nature because particles and antiparticles annihilate each other to produce high-energy radiation. A common example is electron-positron annihilation. This process proceeds by the reaction

The electron and positron vanish completely and two photons are produced in their place. (It turns out that the production of a single photon would violate conservation of energy and momentum.) This reaction can also proceed in the reverse direction: Two photons can annihilate each other to produce an electron and positron pair. Or, a single photon can produce an electron-positron pair in the field of a nucleus, a process called pair production. Reactions of this kind are measured routinely in modern particle detectors. The existence of antiparticles in nature is not science fiction.

Watch this video to learn more about matter and antimatter particles.

What are the four fundamental forces? Briefly describe them.

Distinguish fermions and bosons using the concepts of indistiguishability and exchange symmetry.

Distinguish between elementary particles and antiparticles. Describe their interactions.

How much energy is released when an electron and a positron at rest annihilate each other? (For particle masses, see (Figure).)

of energy is released in the annihilation of a sphere of matter and antimatter, and the spheres are equal mass, what are the masses of the spheres?

When both an electron and a positron are at rest, they can annihilate each other according to the reaction

In this case, what are the energy, momentum, and frequency of each photon?

What is the total kinetic energy carried away by the particles of the following decays?

antiparticle
subatomic particle with the same mass and lifetime as its associated particle, but opposite electric charge

boson
particle with integral spin that are symmetric on exchange

fermion
particle with half-integral spin that is antisymmetric on exchange

fundamental force
one of four forces that act between bodies of matter: the strong nuclear, electromagnetic, weak nuclear, and gravitational forces

hadron
a meson or baryon

lepton
a fermion that participates in the electroweak force

mesons
a group of two quarks

m) responsible for binding protons and neutrons together in atomic nuclei