The length of the train car in (Figure) is the same for all the passengers. All of them would agree on the simultaneous location of the two ends of the car and obtain the same result for the distance between them. But simultaneous events in one inertial frame need not be simultaneous in another. If the train could travel at relativistic speeds, an observer on the ground would see the simultaneous locations of the two endpoints of the car at a different distance apart than observers inside the car. Measured distances need not be the same for different observers when relativistic speeds are involved.

People might describe distances differently, but at relativistic speeds, the distances really are different. (credit: “russavia”/Flickr) 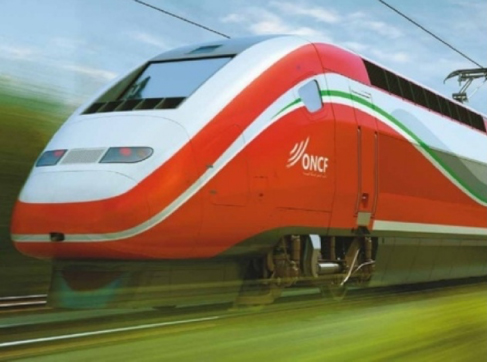 The muon discussed in (Figure) illustrates this concept ((Figure)). To an observer on Earth, the muon travels at 0.950c for 7.05 μs from the time it is produced until it decays. Therefore, it travels a distance relative to Earth of:

In the muon frame, the lifetime of the muon is 2.20 μs. In this frame of reference, the Earth, air, and ground have only enough time to travel:

The distance between the same two events (production and decay of a muon) depends on who measures it and how they are moving relative to it.

is the distance between two points measured by an observer who is at rest relative to both of the points.

because the points at which the muon is produced and decays are stationary relative to Earth. To the muon, Earth, air, and clouds are moving, so the distance L it sees is not the proper length.

(a) The earthbound observer sees the muon travel 2.01 km. (b) The same path has length 0.627 km seen from the muon’s frame of reference. The Earth, air, and clouds are moving relative to the muon in its frame, and have smaller lengths along the direction of travel.

To relate distances measured by different observers, note that the velocity relative to the earthbound observer in our muon example is given by

The time relative to the earthbound observer is

The two velocities are identical; thus,

Substituting this equation into the relationship above gives

gives an equation relating the distances measured by different observers.

Length contraction is the decrease in the measured length of an object from its proper length when measured in a reference frame that is moving with respect to the object:

If we measure the length of anything moving relative to our frame, we find its length L to be smaller than the proper length

that would be measured if the object were stationary. For example, in the muon’s rest frame, the distance Earth moves between where the muon was produced and where it decayed is shorter than the distance traveled as seen from the Earth’s frame. Those points are fixed relative to Earth but are moving relative to the muon. Clouds and other objects are also contracted along the direction of motion as seen from muon’s rest frame.

Thus, two observers measure different distances along their direction of relative motion, depending on which one is measuring distances between objects at rest.

But what about distances measured in a direction perpendicular to the relative motion? Imagine two observers moving along their x-axes and passing each other while holding meter sticks vertically in the y-direction. (Figure) shows two meter sticks M and

respectively. A small paintbrush is attached to the top (the 100-cm mark) of stick

is moving to the right at a very high speed v relative to S, and the sticks are oriented so that they are perpendicular, or transverse, to their relative velocity vector. The sticks are held so that as they pass each other, their lower ends (the 0-cm marks) coincide. Assume that when S looks at his stick M afterwards, he finds a line painted on it, just below the top of the stick. Because the brush is attached to the top of the other boy’s stick

S can only conclude that stick

are stationary in the reference frames of observers S and

respectively. As the sticks pass, a small brush attached to the 100-cm mark of

paints a line on M. 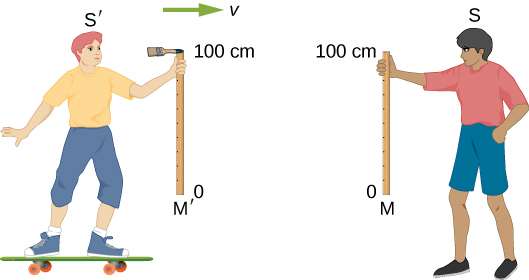 Now when the boys approach each other,

like S, sees a meter stick moving toward him with speed v. Because their situations are symmetric, each boy must make the same measurement of the stick in the other frame. So, if S measures stick

must measure stick M to be also less than 1.0 m long, and

must see his paintbrush pass over the top of stick M and not paint a line on it. In other words, after the same event, one boy sees a painted line on a stick, while the other does not see such a line on that same stick!

Einstein’s first postulate requires that the laws of physics (as, for example, applied to painting) predict that S and

who are both in inertial frames, make the same observations; that is, S and

must either both see a line painted on stick M, or both not see that line. We are therefore forced to conclude our original assumption that S saw a line painted below the top of his stick was wrong! Instead, S finds the line painted right at the 100-cm mark on M. Then both boys will agree that a line is painted on M, and they will also agree that both sticks are exactly 1 m long. We conclude then that measurements of a transverse length must be the same in different inertial frames.

Calculating Length Contraction Suppose an astronaut, such as the twin in the twin paradox discussion, travels so fast that 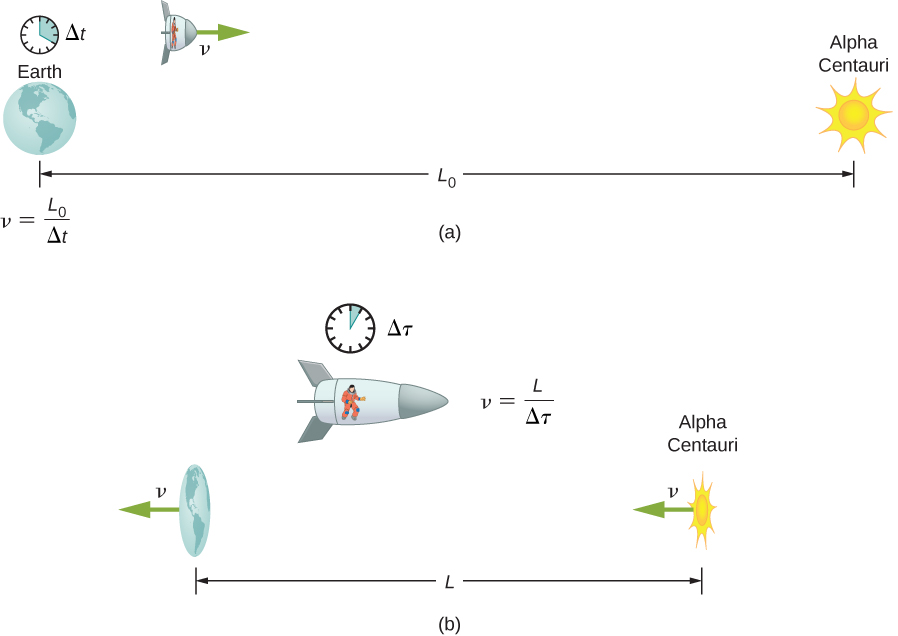 Strategy First, note that a light year (ly) is a convenient unit of distance on an astronomical scale—it is the distance light travels in a year. For part (a), the 4.300-ly distance between Alpha Centauri and Earth is the proper distance

because it is measured by an earthbound observer to whom both stars are (approximately) stationary. To the astronaut, Earth and Alpha Centauri are moving past at the same velocity, so the distance between them is the contracted length L. In part (b), we are given

so we can find v by rearranging the definition of

Significance Remember not to round off calculations until the final answer, or you could get erroneous results. This is especially true for special relativity calculations, where the differences might only be revealed after several decimal places. The relativistic effect is large here

and we see that v is approaching (not equaling) the speed of light. Because the distance as measured by the astronaut is so much smaller, the astronaut can travel it in much less time in her frame.

People traveling at extremely high velocities could cover very large distances (thousands or even millions of light years) and age only a few years on the way. However, like emigrants in past centuries who left their home, these people would leave the Earth they know forever. Even if they returned, thousands to millions of years would have passed on Earth, obliterating most of what now exists. There is also a more serious practical obstacle to traveling at such velocities; immensely greater energies would be needed to achieve such high velocities than classical physics predicts can be attained. This will be discussed later in the chapter.

Why don’t we notice length contraction in everyday life? The distance to the grocery store does not seem to depend on whether we are moving or not. Examining the equation

we see that at low velocities

the lengths are nearly equal, which is the classical expectation. But length contraction is real, if not commonly experienced. For example, a charged particle such as an electron traveling at relativistic velocity has electric field lines that are compressed along the direction of motion as seen by a stationary observer ((Figure)). As the electron passes a detector, such as a coil of wire, its field interacts much more briefly, an effect observed at particle accelerators such as the 3-km-long Stanford Linear Accelerator (SLAC). In fact, to an electron traveling down the beam pipe at SLAC, the accelerator and Earth are all moving by and are length contracted. The relativistic effect is so great that the accelerator is only 0.5 m long to the electron. It is actually easier to get the electron beam down the pipe, because the beam does not have to be as precisely aimed to get down a short pipe as it would to get down a pipe 3 km long. This, again, is an experimental verification of the special theory of relativity.

The electric field lines of a high-velocity charged particle are compressed along the direction of motion by length contraction, producing an observably different signal as the particle goes through a coil. 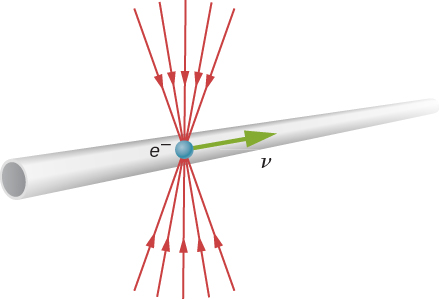 Check Your Understanding A particle is traveling through Earth’s atmosphere at a speed of 0.750c. To an earthbound observer, the distance it travels is 2.50 km. How far does the particle travel as viewed from the particle’s reference frame?

The length of an object is greatest to an observer who is moving with the object, and therefore measures its proper length.

Relativistic effects such as time dilation and length contraction are present for cars and airplanes. Why do these effects seem strange to us?

Suppose an astronaut is moving relative to Earth at a significant fraction of the speed of light. (a) Does he observe the rate of his clocks to have slowed? (b) What change in the rate of earthbound clocks does he see? (c) Does his ship seem to him to shorten? (d) What about the distance between two stars that lie in the direction of his motion? (e) Do he and an earthbound observer agree on his velocity relative to Earth?

A spaceship, 200 m long as seen on board, moves by the Earth at 0.970c. What is its length as measured by an earthbound observer?

How fast would a 6.0 m-long sports car have to be going past you in order for it to appear only 5.5 m long?

(a) How far does the muon in (Figure) travel according to the earthbound observer? (b) How far does it travel as viewed by an observer moving with it? Base your calculation on its velocity relative to the Earth and the time it lives (proper time). (c) Verify that these two distances are related through length contraction

(b) How far would it have traveled as observed on Earth? (c) What distance is this in the muon’s frame?

Unreasonable Results A spaceship is heading directly toward Earth at a velocity of 0.800c. The astronaut on board claims that he can send a canister toward the Earth at 1.20c relative to Earth. (a) Calculate the velocity the canister must have relative to the spaceship. (b) What is unreasonable about this result? (c) Which assumptions are unreasonable or inconsistent?

a. 10.0c; b. The resulting speed of the canister is greater than c, an impossibility. c. It is unreasonable to assume that the canister will move toward the earth at 1.20c.