The forces that bind nucleons together in an atomic nucleus are much greater than those that bind an electron to an atom through electrostatic attraction. This is evident by the relative sizes of the atomic nucleus and the atom

respectively). The energy required to pry a nucleon from the nucleus is therefore much larger than that required to remove (or ionize) an electron in an atom. In general, all nuclear changes involve large amounts of energy per particle undergoing the reaction. This has numerous practical applications.

According to nuclear particle experiments, the total mass of a nucleus

is less than the sum of the masses of its constituent nucleons (protons and neutrons). The mass difference, or mass defect, is given by

is the total mass of the protons,

is the total mass of the neutrons, and

is the mass of the nucleus. According to Einstein’s special theory of relativity, mass is a measure of the total energy of a system (

). Thus, the total energy of a nucleus is less than the sum of the energies of its constituent nucleons. The formation of a nucleus from a system of isolated protons and neutrons is therefore an exothermic reaction—meaning that it releases energy. The energy emitted, or radiated, in this process is

Now imagine this process occurs in reverse. Instead of forming a nucleus, energy is put into the system to break apart the nucleus ((Figure)). The amount of energy required is called the total binding energy (BE),

The binding energy is equal to the amount of energy released in forming the nucleus, and is therefore given by

is roughly proportional to the total number of nucleons in the nucleus, A. The binding energy of a magnesium nucleus (

), for example, is approximately two times greater than for the carbon nucleus (

The binding energy is the energy required to break a nucleus into its constituent protons and neutrons. A system of separated nucleons has a greater mass than a system of bound nucleons.

Solution From (Figure), the mass defect for the deuteron is

The binding energy of the deuteron is then

Over two million electron volts are needed to break apart a deuteron into a proton and a neutron. This very large value indicates the great strength of the nuclear force. By comparison, the greatest amount of energy required to liberate an electron bound to a hydrogen atom by an attractive Coulomb force (an electromagnetic force) is about 10 eV.

Graph of Binding Energy per Nucleon

In nuclear physics, one of the most important experimental quantities is the binding energy per nucleon (BEN), which is defined by

This quantity is the average energy required to remove an individual nucleon from a nucleus—analogous to the ionization energy of an electron in an atom. If the BEN is relatively large, the nucleus is relatively stable. BEN values are estimated from nuclear scattering experiments.

A graph of binding energy per nucleon versus atomic number A is given in (Figure). This graph is considered by many physicists to be one of the most important graphs in physics. Two notes are in order. First, typical BEN values range from 6–10 MeV, with an average value of about 8 MeV. In other words, it takes several million electron volts to pry a nucleon from a typical nucleus, as compared to just 13.6 eV to ionize an electron in the ground state of hydrogen. This is why nuclear force is referred to as the “strong” nuclear force.

Second, the graph rises at low A, peaks very near iron

and then tapers off at high A. The peak value suggests that the iron nucleus is the most stable nucleus in nature (it is also why nuclear fusion in the cores of stars ends with Fe). The reason the graph rises and tapers off has to do with competing forces in the nucleus. At low values of A, attractive nuclear forces between nucleons dominate over repulsive electrostatic forces between protons. But at high values of A, repulsive electrostatic forces between forces begin to dominate, and these forces tend to break apart the nucleus rather than hold it together.

In this graph of binding energy per nucleon for stable nuclei, the BEN is greatest for nuclei with a mass near 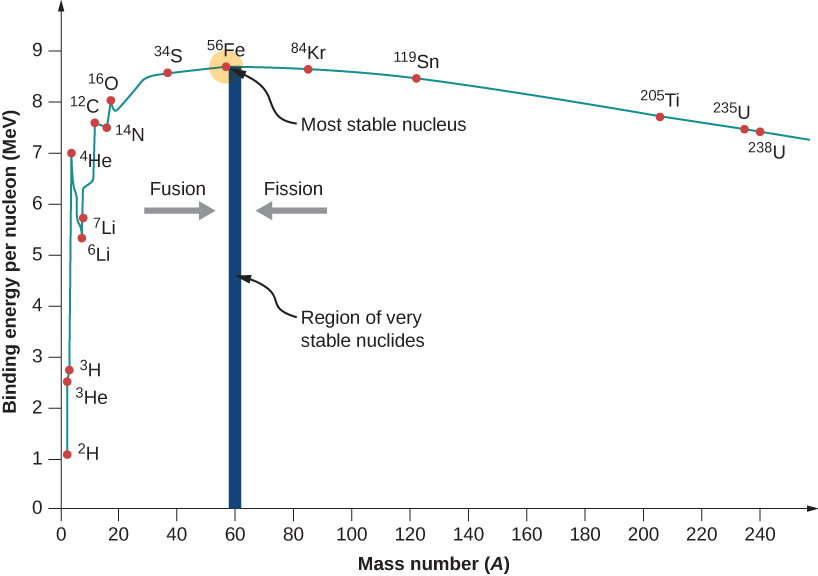 As we will see, the BEN-versus-A graph implies that nuclei divided or combined release an enormous amount of energy. This is the basis for a wide range of phenomena, from the production of electricity at a nuclear power plant to sunlight.

Strategy Determine the total binding energy (BE) using the equation

is the mass defect. The binding energy per nucleon (BEN) is BE divided by A.

The total binding energy is

the total binding energy per nucleon is

Significance Notice that the binding energy per nucleon for

is much greater than for the hydrogen isotopes

Therefore, helium nuclei cannot break down hydrogen isotopes without energy being put into the system.

Check Your Understanding If the binding energy per nucleon is large, does this make it harder or easier to strip off a nucleon from a nucleus?

Explain why a bound system should have less mass than its components. Why is this not observed traditionally, say, for a building made of bricks?

If the energy of a system is reduced, the total mass of the system is reduced. If two bricks are placed next to one another, the attraction between them is purely gravitational, assuming the bricks are electrically neutral. The gravitational force between the bricks is relatively small (compared to the strong nuclear force), so the mass defect is much too small to be observed. If the bricks are glued together with cement, the mass defect is likewise small because the electrical interactions between the electrons involved in the bonding are still relatively small.

To obtain the most precise value of the binding energy per nucleon, it is important to take into account forces between nucleons at the surface of the nucleus. Will surface effects increase or decrease estimates of BEN?

Nucleons at the surface of a nucleus interact with fewer nucleons. This reduces the binding energy per nucleon, which is based on an average over all the nucleons in the nucleus.

Find the mass defect and the binding energy for the helium-4 nucleus.

is among the most tightly bound of all nuclides. It makes up more than

of natural iron. Note that

has even numbers of protons and neutrons. Calculate the binding energy per nucleon for

is the heaviest stable nuclide, and its BEN is low compared with medium-mass nuclides. Calculate BEN for this nucleus and compare it with the approximate value obtained from the graph in (Figure).

(a) Calculate BEN for

, the rarer of the two most common uranium isotopes; (b) Calculate BEN for

. (Most of uranium is

The fact that BEN peaks at roughly

implies that the range of the strong nuclear force is about the diameter of this nucleus.

(a) Calculate the diameter of

(b) Compare BEN for