and neutrons carry no charge. These particles are packed together into an extremely small space at the center of an atom. According to scattering experiments, the nucleus is spherical or ellipsoidal in shape, and about 1/100,000th the size of a hydrogen atom. If an atom were the size of a major league baseball stadium, the nucleus would be roughly the size of the baseball. Protons and neutrons within the nucleus are called nucleons. 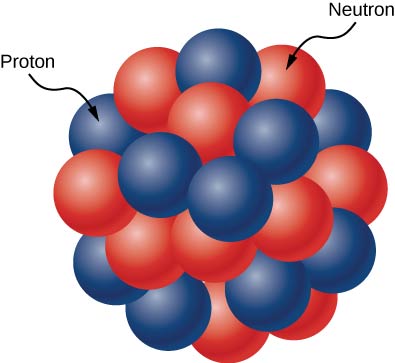 A nucleus is represented symbolically by

where X represents the chemical element, A is the mass number, and Z is the atomic number. For example,

represents the carbon nucleus with six protons and six neutrons (or 12 nucleons).

and the data points fall above the red line. The number of neutrons is generally greater than the number of protons for 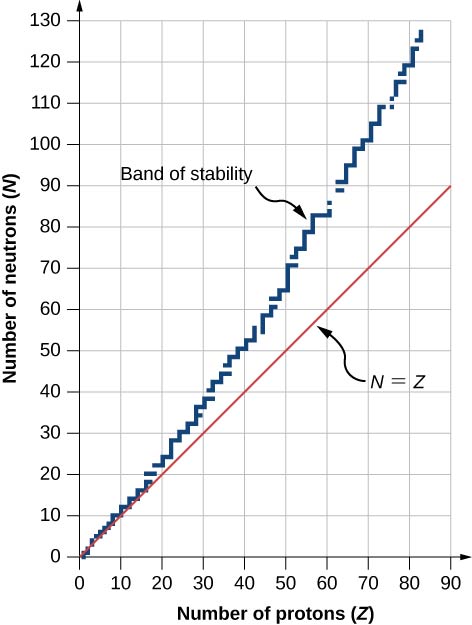 A chart based on this graph that provides more detailed information about each nucleus is given in (Figure). This chart is called a chart of the nuclides. Each cell or tile represents a separate nucleus. The nuclei are arranged in order of ascending Z (along the horizontal direction) and ascending N (along the vertical direction).

Partial chart of the nuclides. For stable nuclei (dark blue backgrounds), cell values represent the percentage of nuclei found on Earth with the same atomic number (percent abundance). For the unstable nuclei, the number represents the half-life. 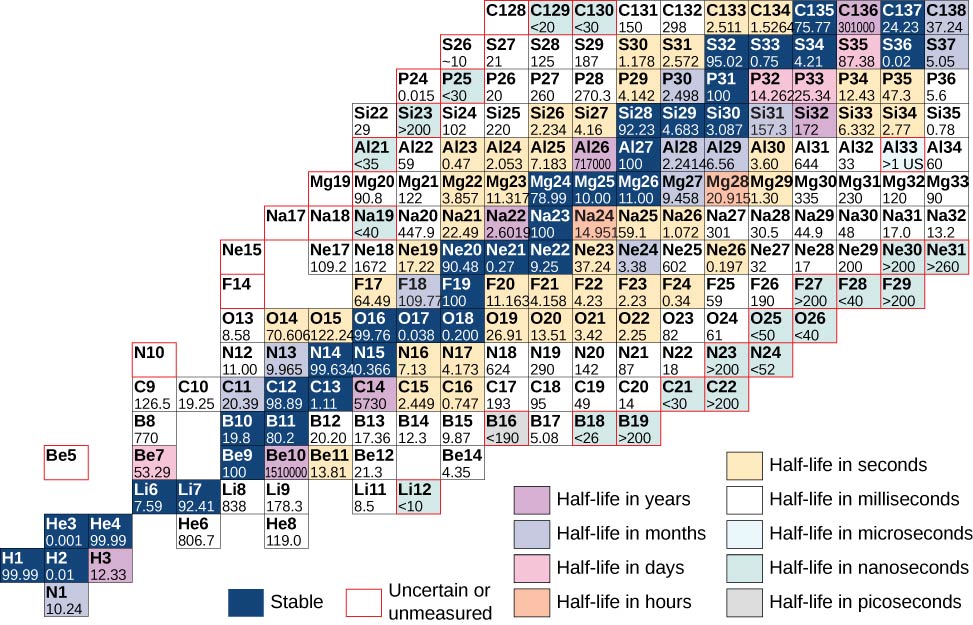 Atoms that contain nuclei with the same number of protons (Z) and different numbers of neutrons (N) are called isotopes. For example, hydrogen has three isotopes: normal hydrogen (1 proton, no neutrons), deuterium (one proton and one neutron), and tritium (one proton and two neutrons). Isotopes of a given atom share the same chemical properties, since these properties are determined by interactions between the outer electrons of the atom, and not the nucleons. For example, water that contains deuterium rather than hydrogen (“heavy water”) looks and tastes like normal water. The following table shows a list of common isotopes.

Why do neutrons outnumber protons in heavier nuclei ((Figure))? The answer to this question requires an understanding of forces inside the nucleus. Two types of forces exist: (1) the long-range electrostatic (Coulomb) force that makes the positively charged protons repel one another; and (2) the short-range strong nuclear force that makes all nucleons in the nucleus attract one another. You may also have heard of a “weak” nuclear force. This force is responsible for some nuclear decays, but as the name implies, it does not play a role in stabilizing the nucleus against the strong Coulomb repulsion it experiences. We discuss strong nuclear force in more detail in the next chapter when we cover particle physics. Nuclear stability occurs when the attractive forces between nucleons compensate for the repulsive, long-range electrostatic forces between all protons in the nucleus. For heavy nuclei

excess neutrons are necessary to keep the electrostatic interactions from breaking the nucleus apart, as shown in (Figure). 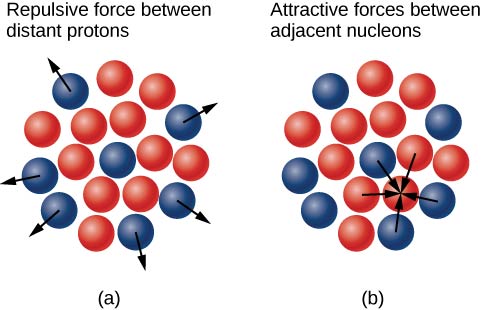 Because of the existence of stable isotopes, we must take special care when quoting the mass of an element. For example, Copper (Cu) has two stable isotopes:

Given these two “versions” of Cu, what is the mass of this element? The atomic mass of an element is defined as the weighted average of the masses of its isotopes. Thus, the atomic mass of Cu is

The mass of an individual nucleus is often expressed in atomic mass units (u), where

where r is the radius of a nucleus and k is a constant with units of volume. Solving for r, we have

is a constant. For hydrogen (

corresponds to the radius of a single proton. Scattering experiments support this general relationship for a wide range of nuclei, and they imply that neutrons have approximately the same radius as protons. The experimentally measured value for

is approximately 1.2 femtometer (recall that

The Iron NucleusFind the radius (r) and approximate density (

Strategy (a) Finding the radius of

is a straightforward application of

(b) To find the approximate density of this nucleus, assume the nucleus is spherical. Calculate its volume using the radius found in part (a), and then find its density from

Check Your Understanding Nucleus X is two times larger than nucleus Y. What is the ratio of their atomic masses?

Define and make clear distinctions between the terms neutron, nucleon, nucleus, and nuclide.

The nucleus of an atom is made of one or more nucleons. A nucleon refers to either a proton or neutron. A nuclide is a stable nucleus.

What are isotopes? Why do isotopes of the same atom share the same chemical properties?

Find the atomic numbers, mass numbers, and neutron numbers for (a)

. Find the atomic mass of the element silver.

A particle has a mass equal to 10 u. If this mass is converted completely into energy, how much energy is released? Express your answer in mega-electron volts (MeV). (Recall that

Find the length of a side of a cube having a mass of 1.0 kg and the density of nuclear matter.

The detail that you can observe using a probe is limited by its wavelength. Calculate the energy of a particle that has a wavelength of

, small enough to detect details about one-tenth the size of a nucleon.

atomic mass
total mass of the protons, neutrons, and electrons in a single atom

atomic mass unit
unit used to express the mass of an individual nucleus, where

atomic number
number of protons in a nucleus

chart of the nuclides
graph comprising stable and unstable nuclei

mass number
number of nucleons in a nucleus

neutron number
number of neutrons in a nucleus

nucleons
protons and neutrons found inside the nucleus of an atom

strong nuclear force
force that binds nucleons together in the nucleus