In the 1960s, particle physicists began to realize that hadrons are not elementary particles but are made of particles called quarks. (The name ‘quark’ was coined by the physicist Murray Gell-Mann, from a phrase in the James Joyce novel Finnegans Wake.) Initially, it was believed there were only three types of quarks, called up (u), down (d), and strange (s). However, this number soon grew to six—interestingly, the same as the number of leptons—to include charmed (c), bottom (b), and top (t).

All quarks are spin-half fermions

have a fractional charge

, and have baryon number

Each quark has an antiquark with the same mass but opposite charge and baryon number. The names and properties of the six quarks are listed in (Figure).

As mentioned earlier, quarks bind together in groups of two or three to form hadrons. Baryons are formed from three quarks. Sample baryons, including quark content and properties, are given in (Figure). Interestingly, the delta plus (

) baryon is formed from the same three quarks as the proton, but the total spin of the particle is 3/2 rather than 1/2. Similarly, the mass of

) baryon with a spin 3/2 is 1.3 times the neutron mass. Evidently, the energy associated with the spin (or angular momentum) of the particle contributes to its mass energy. It is also interesting that no baryons are believed to exist with top quarks, because top quarks decay too quickly to bind to the other quarks in their production.

Mesons are formed by two quarks—a quark-antiquark pair. Sample mesons, including quark content and properties, are given in (Figure). Consider the formation of the pion (

). Based on its quark content, the charge of the pion is

meson is 0. The same quark-antiquark combination gives the rho (

) meson with spin 1. This meson has a mass approximately 5.5 times that of the

Quark Structure Show that the quark composition given in (Figure) for

is consistent with the known charge, spin, and strangeness of this baryon.

is composed of two strange quarks and an up quark (s u s). We can add together the properties of quarks to predict the resulting properties of the

Solution The charge of the s quark is

and the charge of the u quark is 2e/3. Thus, the combination (s u s) has no net charge, in agreement with the known charge of

quarks can combine to produce a particle with spin of either 1/2 or 3/2, the quark composition is consistent with the known spin (

. Finally, the net strangeness of the (s u s) combination is

which also agrees with experiment.

Significance The charge, spin, and strangeness of the

particle can be determined from the properties of its constituent quarks. The great diversity of baryons and mesons can be traced to the properties of just six quarks: up, down, charge, strange, top, and bottom.

Check Your Understanding What is the baryon number of a pion?

Quarks are fermions that obey Pauli’s exclusion principle, so it might be surprising to learn that three quarks can bind together within a nucleus. For example, how can two up quarks exist in the same small region of space within a proton? The solution is to invent a third new property to distinguish them. This property is called color, and it plays the same role in the strong nuclear interaction as charge does in electromagnetic interactions. For this reason, quark color is sometimes called “strong charge.”

Quarks come in three colors: red, green, and blue. (These are just labels—quarks are not actually colored.) Each type of quark

can possess any other colors. For example, three strange quarks exist: a red strange quark, a green strange quark, and a blue strange quark. Antiquarks have anticolor. Quarks that bind together to form hadrons (baryons and mesons) must be color neutral, colorless, or “white.” Thus, a baryon must contain a red, blue, and green quark. Likewise, a meson contains either a red-antired, blue-antiblue, or green-antigreen quark pair. Thus, two quarks can be found in the same spin state in a hadron, without violating Pauli’s exclusion principle, because their colors are different.

The first strong evidence for the existence of quarks came from a series of experiments performed at the Stanford Linear Accelerator Center (SLAC) and at CERN around 1970. This experiment was designed to probe the structure of the proton, much like Rutherford studied structure inside the atom with his

-particle scattering experiments. Electrons were collided with protons with energy in excess of 20 GeV. At this energy,

, so the de Broglie wavelength of an electron is

Thus, like an automobile traveling through a rocky mountain range, electrons can be used to probe the structure of the nucleus.

, in agreement with the quark model.

Watch this video to learn more about quarks.

The quark model has been extremely successful in organizing the complex world of subatomic particles. Interestingly, however, no experiment has ever produced an isolated quark. All quarks have fractional charge and should therefore be easily distinguishable from the known elementary particles, whose charges are all an integer multiple of e. Why are isolated quarks not observed? In current models of particle interactions, the answer is expressed in terms of quark confinement. Quark confinement refers to the confinement of quarks in groups of two or three in a small region of space. The quarks are completely free to move about in this space, and send and receive gluons (the carriers of the strong force). However, if these quarks stray too far from one another, the strong force pulls them back it. This action is likened to a bola, a weapon used for hunting ((Figure)). The stones are tied to a central point by a string, so none of the rocks can move too far from the others. The bola corresponds to a baryon, the stones correspond to quarks, and the string corresponds to the gluons that hold the system together.

A baryon is analogous to a bola, a weapon used for hunting. The rocks in this image correspond to the baryon quarks. The quarks are free to move about but must remain close to the other quarks. 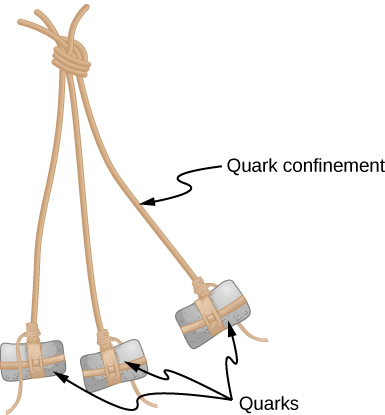 What are the six known quarks? Summarize their properties.

What is the general quark composition of a baryon? Of a meson?

What evidence exists for the existence of quarks?

Why do baryons with the same quark composition sometimes differ in their rest mass energies?

Based on quark composition of a proton, show that its charge is

A proton consists of two up quarks and one down quark. The total charge of a proton is therefore

Based on the quark composition of a neutron, show that is charge is 0.

Argue that the quark composition given in (Figure) for the positive kaon is consistent with the known charge, spin, and strangeness of this baryon.

meson is composed of an up quark and a strange antiquark (

). Since the changes of this quark and antiquark are 2e/3 and e/3, respectively, the net charge of the

meson is e, in agreement with its known value. Two spin

particles can combine to produce a particle with spin of either 0 or 1, consistent with the

meson’s spin of 0. The net strangeness of the up quark and strange antiquark is

, in agreement with the measured strangeness of the

(a) Determine the charge and strangeness of each combination. (b) Identify one or more mesons formed by each quark-antiquark combination.

Why can’t either set of quarks shown below form a hadron? 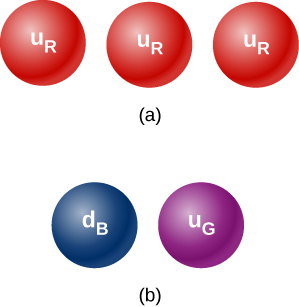 a. color; b. quark-antiquark

—an isolated quark. What quark could this be? Why would this discovery be important?

decays of quarks. Check to see that the conservation laws for charge, lepton number, and baryon number are satisfied by the quark