In 1896, Antoine Becquerel discovered that a uranium-rich rock emits invisible rays that can darken a photographic plate in an enclosed container. Scientists offer three arguments for the nuclear origin of these rays. First, the effects of the radiation do not vary with chemical state; that is, whether the emitting material is in the form of an element or compound. Second, the radiation does not vary with changes in temperature or pressure—both factors that in sufficient degree can affect electrons in an atom. Third, the very large energy of the invisible rays (up to hundreds of eV) is not consistent with atomic electron transitions (only a few eV). Today, this radiation is explained by the conversion of mass into energy deep within the nucleus of an atom. The spontaneous emission of radiation from nuclei is called nuclear radioactivity ((Figure)).

The international ionizing radiation symbol is universally recognized as the warning symbol for nuclear radiation. 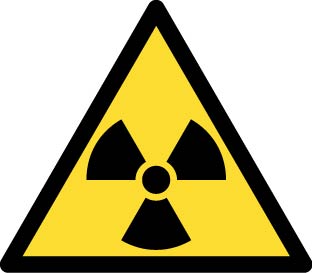 When an individual nucleus transforms into another with the emission of radiation, the nucleus is said to decay. Radioactive decay occurs for all nuclei with

and also for some unstable isotopes with

The decay rate is proportional to the number of original (undecayed) nuclei N in a substance. The number of nuclei lost to decay,

in time interval dt, is written

is called the decay constant. (The minus sign indicates the number of original nuclei decreases over time.) In other words, the more nuclei available to decay, the more that do decay (in time dt). This equation can be rewritten as

Integrating both sides of the equation, and defining

to be the number of nuclei at

Taking the left and right sides of the equation as a power of e, we have the radioactive decay law.

is the decay constant for the particular nucleus.

The total number of nuclei drops very rapidly at first, and then more slowly ((Figure)).

A plot of the radioactive decay law demonstrates that the number of nuclei remaining in a decay sample drops dramatically during the first moments of decay. 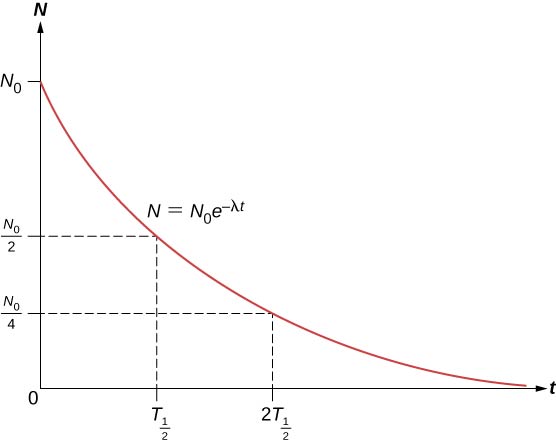 of a radioactive substance is defined as the time for half of the original nuclei to decay (or the time at which half of the original nuclei remain). The half-lives of unstable isotopes are shown in the chart of nuclides in (Figure). The number of radioactive nuclei remaining after an integer (n) number of half-lives is therefore

If the decay constant (

) is large, the half-life is small, and vice versa. To determine the relationship between these quantities, note that when

. Thus, (Figure) can be rewritten as

Dividing both sides by

and taking the natural logarithm yields

Thus, if we know the half-life T1/2 of a radioactive substance, we can find its decay constant. The lifetime

of a radioactive substance is defined as the average amount of time that a nucleus exists before decaying. The lifetime of a substance is just the reciprocal of the decay constant, written as

The activity A is defined as the magnitude of the decay rate, or

The infinitesimal change dN in the time interval dt is negative because the number of parent (undecayed) particles is decreasing, so the activity (A) is positive. Defining the initial activity as

Thus, the activity A of a radioactive substance decreases exponentially with time ((Figure)).

(a) A plot of the activity as a function of time (b) If we measure the activity at different times, we can plot ln A versus t, and obtain a straight line.

Decay Constant and Activity of Strontium-90 The half-life of strontium-90,

Strategy We can find the decay constant directly from (Figure). To determine the activity, we first need to find the number of nuclei present.

in terms of the half-life of the substance, we get

Therefore, the activity is halved after one half-life. We can determine the decay constant

by measuring the activity as a function of time. Taking the natural logarithm of the left and right sides of (Figure), we get

This equation follows the linear form

. If we plot ln A versus t, we expect a straight line with slope

((Figure)(b)). Activity A is expressed in units of becquerels (Bq), where one

. This quantity can also be expressed in decays per minute or decays per year. One of the most common units for activity is the curie (Ci), defined to be the activity of 1 g of

. The relationship between the Bq and Ci is

of the human body by mass is carbon. Calculate the activity due to

in 1.00 kg of carbon found in a living organism. Express the activity in units of Bq and Ci.

Strategy The activity of

is determined using the equation

, where λ is the decay constant and

nuclei in a 1.00-kg sample is determined in two steps. First, we determine the number of

nuclei using the concept of a mole. Second, we multiply this value by

(the known abundance of

nuclei in a living organism. The decay constant is determined from the known half-life of

Solution One mole of carbon has a mass of 12.0 g, since it is nearly pure

. Thus, the number of carbon nuclei in a kilogram is

nuclei in 1 kg of carbon is therefore

Now we can find the activity A by using the equation

decays per year. To convert this to the unit Bq, we simply convert years to seconds. Thus,

or 250 decays per second. To express A in curies, we use the definition of a curie,

of the human body by weight is carbon. Hundreds of

decays take place in the human body every second. Carbon-14 and other naturally occurring radioactive substances in the body compose a person’s background exposure to nuclear radiation. As we will see later in this chapter, this activity level is well below the maximum recommended dosages.

Radioactive dating is a technique that uses naturally occurring radioactivity to determine the age of a material, such as a rock or an ancient artifact. The basic approach is to estimate the original number of nuclei in a material and the present number of nuclei in the material (after decay), and then use the known value of the decay constant

and (Figure) to calculate the total time of the decay, t.

nuclei in the upper atmosphere and subsequently decay with a half-life of 5730 years. Radioactive carbon has the same chemistry as stable carbon, so it combines with the ecosphere and eventually becomes part of every living organism. Carbon-14 has an abundance of 1.3 parts per trillion of normal carbon. Therefore, if you know the number of carbon nuclei in an object, you multiply that number by

to find the number of

nuclei in that object. When an organism dies, carbon exchange with the environment ceases, and

is not replenished as it decays.

By comparing the abundance of

in an artifact, such as mummy wrappings, with the normal abundance in living tissue, it is possible to determine the mummy’s age (or the time since the person’s death). Carbon-14 dating can be used for biological tissues as old as 50,000 years, but is generally most accurate for younger samples, since the abundance of

nuclei in them is greater. Very old biological materials contain no

at all. The validity of carbon dating can be checked by other means, such as by historical knowledge or by tree-ring counting.

An Ancient Burial Cave In an ancient burial cave, your team of archaeologists discovers ancient wood furniture. Only

remains in the wood. How old is the furniture?

Strategy The problem statement implies that

can be used to find the product,

. We know the half-life of

is 5730 y, so we also know the decay constant, and therefore the total decay time t.

Taking the natural logarithm of both sides of the equation yields

Rearranging the equation to isolate t gives us

Significance The furniture is almost 2000 years old—an impressive discovery. The typical uncertainty on carbon-14 dating is about

, so the furniture is anywhere between 1750 and 1950 years old. This date range must be confirmed by other evidence, such as historical records.

Check Your Understanding A radioactive nuclide has a high decay rate. What does this mean for its half-life and activity?

Visit the Radioactive Dating Game to learn about the types of radiometric dating and try your hand at dating some ancient objects.

How is the initial activity rate of a radioactive substance related to its half-life?

For the carbon dating described in this chapter, what important assumption is made about the time variation in the intensity of cosmic rays?

That it is constant.

A sample of radioactive material is obtained from a very old rock. A plot lnA verses t yields a slope value of

(see (Figure)(b)). What is the half-life of this material?

The half-life of the nuclei, and thus the material, is

The half-life of strontium-91,

a. The decay constant is

The initial activity for strontium-91 is

A sample of pure carbon-14

has an activity of

What is the mass of the sample?

An old campfire is uncovered during an archaeological dig. Its charcoal is found to contain less than 1/1000 the normal amount of

. Estimate the minimum age of the charcoal, noting that

(b) Explain why your answer is not exactly 1.00 Ci, given that the curie was originally supposed to be exactly the activity of a gram of radium.

is more precisely known than it was when the Ci unit was established.

What were the values for percent abundance of

World War II aircraft had instruments with glowing radium-painted dials. The activity of one such instrument was

was present? (b) After some years, the phosphors on the dials deteriorated chemically, but the radium did not escape. What is the activity of this instrument 57.0 years after it was made?

on the date it was prepared. A student measures the radioactivity of this source with a Geiger counter and observes 1500 counts per minute. She notices that the source was prepared 120 days before her lab. What fraction of the decays is she observing with her apparatus?

Armor-piercing shells with depleted uranium cores are fired by aircraft at tanks. (The high density of the uranium makes them effective.) The uranium is called depleted because it has had its

removed for reactor use and is nearly pure

. Depleted uranium has been erroneously called nonradioactive. To demonstrate that this is wrong: (a) Calculate the activity of 60.0 g of pure

. (b) Calculate the activity of 60.0 g of natural uranium, neglecting the

and all daughter nuclides.

activity
magnitude of the decay rate for radioactive nuclides

becquerel (Bq)
SI unit for the decay rate of a radioactive material, equal to 1 decay/second

curie (Ci)
unit of decay rate, or the activity of 1 g of

lifetime
average time that a nucleus exists before decaying