You may often notice some odd things when looking into a fish tank. For example, you may see the same fish appearing to be in two different places ((Figure)). This happens because light coming from the fish to you changes direction when it leaves the tank, and in this case, it can travel two different paths to get to your eyes. The changing of a light ray’s direction (loosely called bending) when it passes through substances of different refractive indices is called refraction and is related to changes in the speed of light,

. Refraction is responsible for a tremendous range of optical phenomena, from the action of lenses to data transmission through optical fibers.

(a) Looking at the fish tank as shown, we can see the same fish in two different locations, because light changes directions when it passes from water to air. In this case, the light can reach the observer by two different paths, so the fish seems to be in two different places. This bending of light is called refraction and is responsible for many optical phenomena. (b) This image shows refraction of light from a fish near the top of a fish tank. 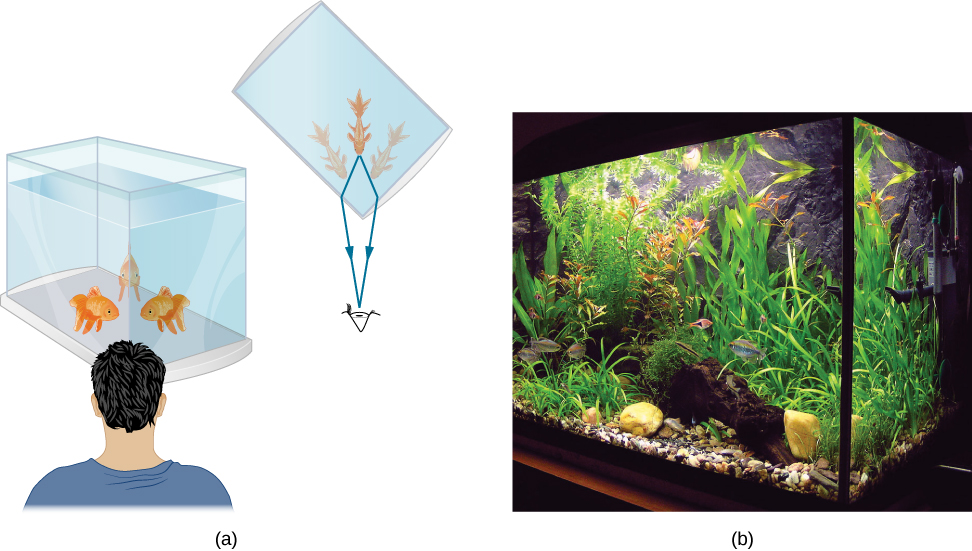 are the indices of refraction for media 1 and 2, and

Determining the Index of Refraction Find the index of refraction for medium 2 in (Figure)(a), assuming medium 1 is air and given that the incident angle is

and the angle of refraction is

Strategy The index of refraction for air is taken to be 1 in most cases (and up to four significant figures, it is 1.000). Thus,

here. From the given information,

With this information, the only unknown in Snell’s law is

so we can use Snell’s law to find it.

Solution From Snell’s law we have

Explore bending of light between two media with different indices of refraction. Use the “Intro” simulation and see how changing from air to water to glass changes the bending angle. Use the protractor tool to measure the angles and see if you can recreate the configuration in (Figure). Also by measurement, confirm that the angle of reflection equals the angle of incidence.

A Larger Change in Direction Suppose that in a situation like that in (Figure), light goes from air to diamond and that the incident angle is

. Calculate the angle of refraction

Strategy Again, the index of refraction for air is taken to be

, and we are given

. We can look up the index of refraction for diamond in (Figure), finding

. The only unknown in Snell’s law is

, which we wish to determine.

The angle is thus

Significance For the same

angle of incidence, the angle of refraction in diamond is significantly smaller than in water

Check Your Understanding In (Figure), the solid with the next highest index of refraction after diamond is zircon. If the diamond in (Figure) were replaced with a piece of zircon, what would be the new angle of refraction?

Diffusion by reflection from a rough surface is described in this chapter. Light can also be diffused by refraction. Describe how this occurs in a specific situation, such as light interacting with crushed ice.

Will light change direction toward or away from the perpendicular when it goes from air to water? Water to glass? Glass to air?

“toward” when increasing n (air to water, water to glass); “away” when decreasing n (glass to air)

Explain why an object in water always appears to be at a depth shallower than it actually is?

Explain why a person’s legs appear very short when wading in a pool. Justify your explanation with a ray diagram showing the path of rays from the feet to the eye of an observer who is out of the water.

A ray from a leg emerges from water after refraction. The observer in air perceives an apparent location for the source, as if a ray traveled in a straight line. See the dashed ray below. 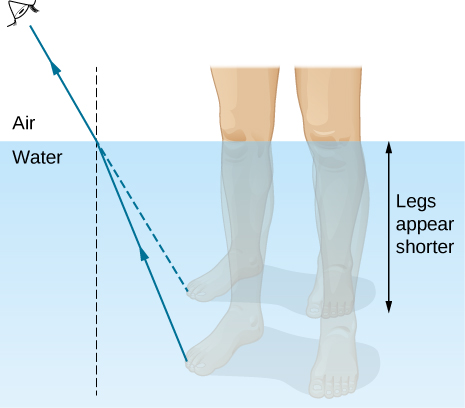 Explain why an oar that is partially submerged in water appears bent.

Unless otherwise specified, for problems 1 through 10, the indices of refraction of glass and water should be taken to be 1.50 and 1.333, respectively.

A light beam in air has an angle of incidence of

at the surface of a glass plate. What are the angles of reflection and refraction?

A light beam in air is incident on the surface of a pond, making an angle of

with respect to the surface. What are the angles of reflection and refraction?

When a light ray crosses from water into glass, it emerges at an angle of

with respect to the normal of the interface. What is its angle of incidence?

. What is the angle of refraction in air?

Light rays from the Sun make a

angle to the vertical when seen from below the surface of a body of water. At what angle above the horizon is the Sun?

to an angle of refraction of

when it enters a rectangular block of plastic. What is the index of refraction of the plastic? 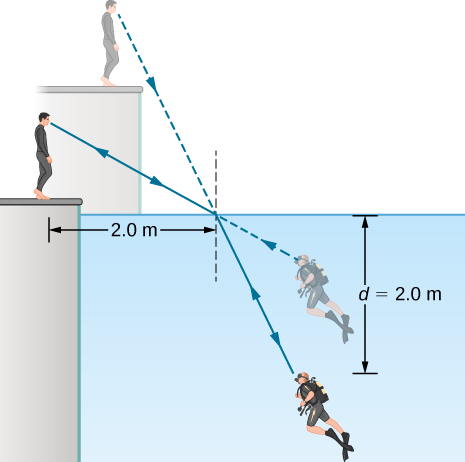 (a) Using information in the preceding problem, find the height of the instructor’s head above the water, noting that you will first have to calculate the angle of incidence. (b) Find the apparent depth of the diver’s head below water as seen by the instructor.

law of refraction
when a light ray crosses from one medium to another, it changes direction by an amount that depends on the index of refraction of each medium and the sines of the angle of incidence and angle of refraction