Momentum is a central concept in physics. The broadest form of Newton’s second law is stated in terms of momentum. Momentum is conserved whenever the net external force on a system is zero. This makes momentum conservation a fundamental tool for analyzing collisions ((Figure)). Much of what we know about subatomic structure comes from the analysis of collisions of accelerator-produced relativistic particles, and momentum conservation plays a crucial role in this analysis. 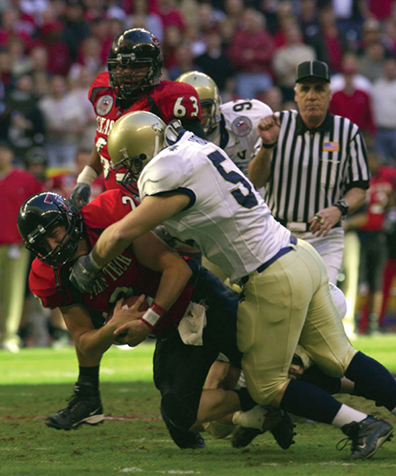 The first postulate of relativity states that the laws of physics are the same in all inertial frames. Does the law of conservation of momentum survive this requirement at high velocities? It can be shown that the momentum calculated as merely

even if it is conserved in one frame of reference, may not be conserved in another after applying the Lorentz transformation to the velocities. The correct equation for momentum can be shown, instead, to be the classical expression in terms of the increment

is classical momentum multiplied by the relativistic factor γ:

where m is the rest mass of the object,

is its velocity relative to an observer, and γ is the relativistic factor:

Note that we use u for velocity here to distinguish it from relative velocity v between observers. The factor

except that it is now in terms of the velocity of the particle u instead of the relative velocity v of two frames of reference.

With p expressed in this way, total momentum

is conserved whenever the net external force is zero, just as in classical physics. Again we see that the relativistic quantity becomes virtually the same as the classical quantity at low velocities, where u/c is small and

is very nearly equal to 1. Relativistic momentum has the same intuitive role as classical momentum. It is greatest for large masses moving at high velocities, but because of the factor

relativistic momentum approaches infinity as u approaches c ((Figure)). This is another indication that an object with mass cannot reach the speed of light. If it did, its momentum would become infinite—an unreasonable value.

Relativistic momentum approaches infinity as the velocity of an object approaches the speed of light. 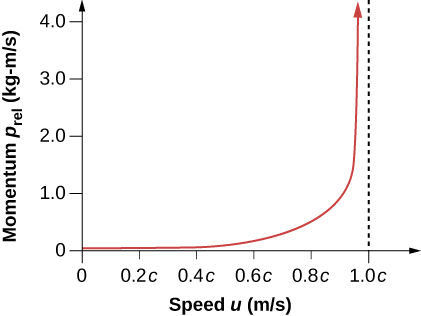 The relativistically correct definition of momentum as

is sometimes taken to imply that mass varies with velocity:

particularly in older textbooks. However, note that m is the mass of the object as measured by a person at rest relative to the object. Thus, m is defined to be the rest mass, which could be measured at rest, perhaps using gravity. When a mass is moving relative to an observer, the only way that its mass can be determined is through collisions or other means involving momentum. Because the mass of a moving object cannot be determined independently of momentum, the only meaningful mass is rest mass. Therefore, when we use the term “mass,” assume it to be identical to “rest mass.”

Check Your Understanding What is the momentum of an electron traveling at a speed 0.985c? The rest mass of the electron is

Substitute the data into the given equation:

How does modern relativity modify the law of conservation of momentum?

Is it possible for an external force to be acting on a system and relativistic momentum to be conserved? Explain.

Find the momentum of a helium nucleus having a mass of

What is the momentum of an electron traveling at 0.980c?

(a) Find the momentum of a

asteroid heading towards Earth at 30.0 km/s. (b) Find the ratio of this momentum to the classical momentum. (Hint: Use the approximation that

(a) What is the momentum of a 2000-kg satellite orbiting at 4.00 km/s? (b) Find the ratio of this momentum to the classical momentum. (Hint: Use the approximation that

? Note that you must calculate the velocity to at least four digits to see the difference from c.

Find the velocity of a proton that has a momentum of

the momentum of an object moving at relativistic velocity;