Do time intervals depend on who observes them? Intuitively, it seems that the time for a process, such as the elapsed time for a foot race ((Figure)), should be the same for all observers. In everyday experiences, disagreements over elapsed time have to do with the accuracy of measuring time. No one would be likely to argue that the actual time interval was different for the moving runner and for the stationary clock displayed. Carefully considering just how time is measured, however, shows that elapsed time does depends on the relative motion of an observer with respect to the process being measured.

Elapsed time for a foot race is the same for all observers, but at relativistic speeds, elapsed time depends on the motion of the observer relative to the location where the process being timed occurs. (credit: “Jason Edward Scott Bain”/Flickr) 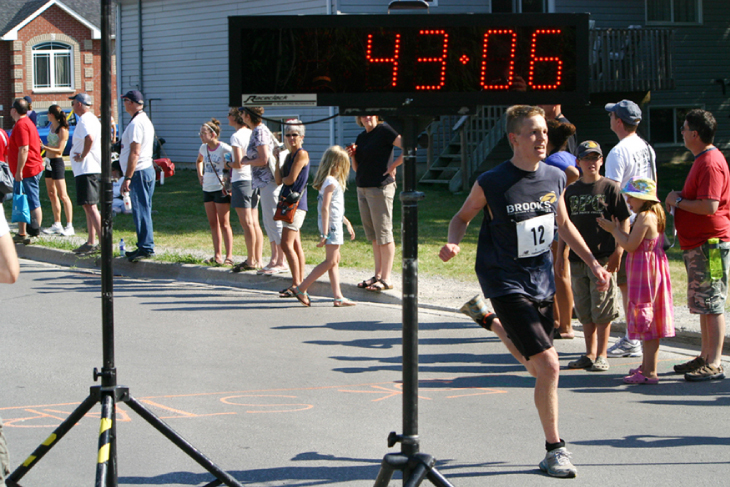 Consider how we measure elapsed time. If we use a stopwatch, for example, how do we know when to start and stop the watch? One method is to use the arrival of light from the event. For example, if you’re in a moving car and observe the light arriving from a traffic signal change from green to red, you know it’s time to step on the brake pedal. The timing is more accurate if some sort of electronic detection is used, avoiding human reaction times and other complications.

Now suppose two observers use this method to measure the time interval between two flashes of light from flash lamps that are a distance apart ((Figure)). An observer A is seated midway on a rail car with two flash lamps at opposite sides equidistant from her. A pulse of light is emitted from each flash lamp and moves toward observer A, shown in frame (a) of the figure. The rail car is moving rapidly in the direction indicated by the velocity vector in the diagram. An observer B standing on the platform is facing the rail car as it passes and observes both flashes of light reach him simultaneously, as shown in frame (c). He measures the distances from where he saw the pulses originate, finds them equal, and concludes that the pulses were emitted simultaneously.

However, because of Observer A’s motion, the pulse from the right of the railcar, from the direction the car is moving, reaches her before the pulse from the left, as shown in frame (b). She also measures the distances from within her frame of reference, finds them equal, and concludes that the pulses were not emitted simultaneously.

(a) Two pulses of light are emitted simultaneously relative to observer B. (c) The pulses reach observer B’s position simultaneously. (b) Because of A’s motion, she sees the pulse from the right first and concludes the bulbs did not flash simultaneously. Both conclusions are correct. 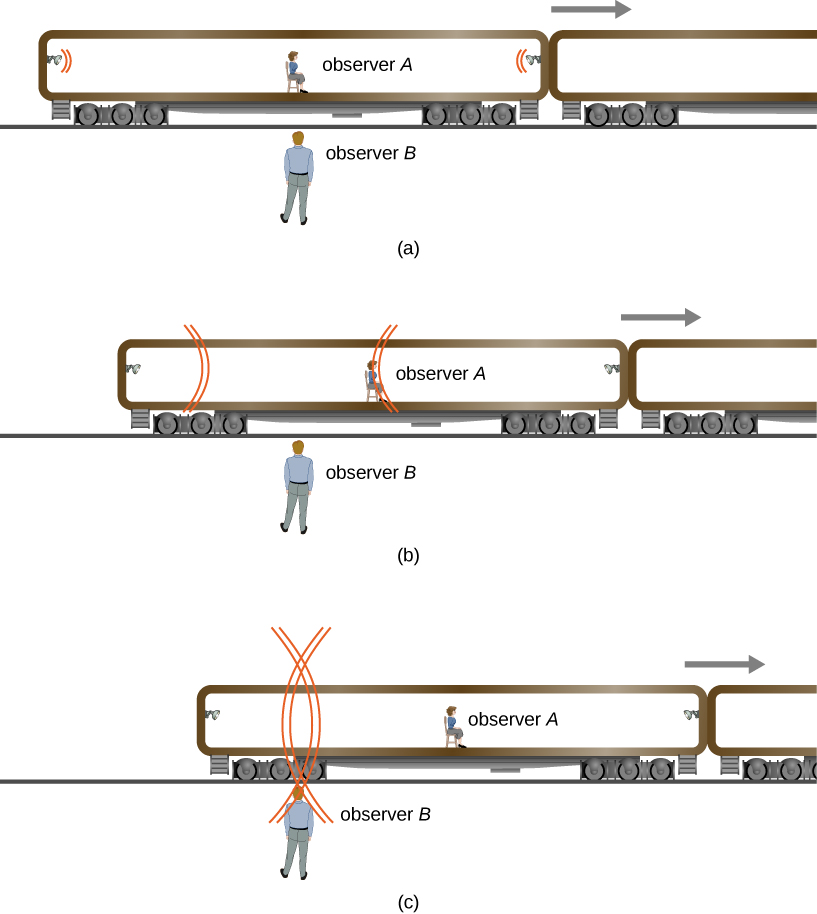 Here, the relative velocity between observers affects whether two events a distance apart are observed to be simultaneous. Simultaneity is not absolute. We might have guessed (incorrectly) that if light is emitted simultaneously, then two observers halfway between the sources would see the flashes simultaneously. But careful analysis shows this cannot be the case if the speed of light is the same in all inertial frames.