Semiconductors have many applications in modern electronics. We describe some basic semiconductor devices in this section. A great advantage of using semiconductors for circuit elements is the fact that many thousands or millions of semiconductor devices can be combined on the same tiny piece of silicon and connected by conducting paths. The resulting structure is called an integrated circuit (ic), and ic chips are the basis of many modern devices, from computers and smartphones to the internet and global communications networks.

Perhaps the simplest device that can be created with a semiconductor is a diode. A diode is a circuit element that allows electric current to flow in only one direction, like a one-way valve (see Model of Conduction in Metals). A diode is created by joining a p-type semiconductor to an n-type semiconductor ((Figure)). The junction between these materials is called a p-n junction. A comparison of the energy bands of a silicon-based diode is shown in (Figure)(b). The positions of the valence and conduction bands are the same, but the impurity levels are quite different. When a p-n junction is formed, electrons from the conduction band of the n-type material diffuse to the p-side, where they combine with holes in the valence band. This migration of charge leaves positive ionized donor ions on the n-side and negative ionized acceptor ions on the p-side, producing a narrow double layer of charge at the p–n junction called the depletion layer. The electric field associated with the depletion layer prevents further diffusion. The potential energy for electrons across the p-n junction is given by (Figure).

(a) Representation of a p-n junction. (b) A comparison of the energy bands of p-type and n-type silicon prior to equilibrium. 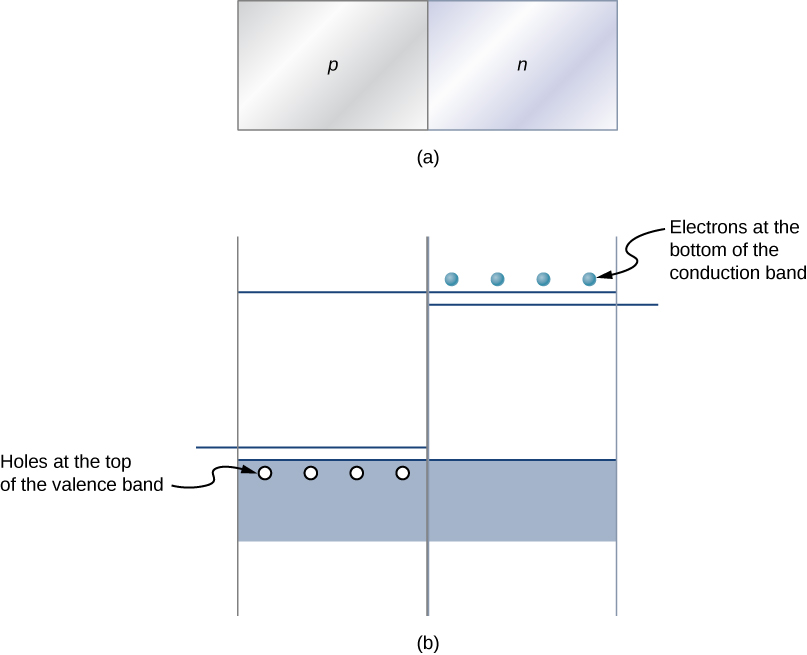 At equilibrium, (a) excess charge resides near the interface and the net current is zero, and (b) the potential energy difference for electrons (in light blue) prevents further diffusion of electrons into the p-side. 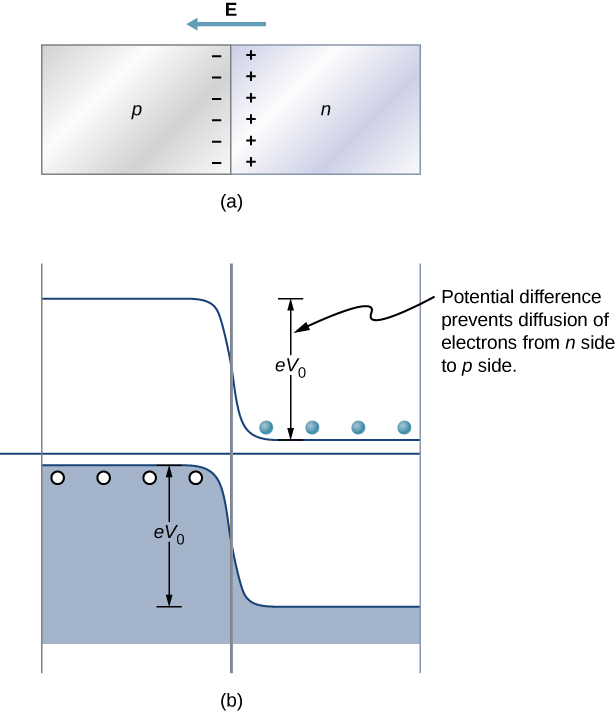 We can estimate the mathematical relationship between the current and voltage for a diode using the electric potential concept. Consider N negatively charged majority carriers (electrons donated by impurity atoms) in the n-type material and a potential barrier V across the p-n junction. According to the Maxwell-Boltzmann distribution, the fraction of electrons that have enough energy to diffuse across the potential barrier is

. However, if a battery of voltage

is applied in the forward-bias configuration, this fraction improves to

. The electric current due to the majority carriers from the n-side to the p-side is therefore

is the current with no applied voltage and T is the temperature. Current due to the minority carriers (thermal excitation of electrons from the valence band to the conduction band on the p-side and subsequent attraction to the n-side) is

, independent of the bias voltage. The net current is therefore

. For extreme values of reverse bias, the atoms in the material are ionized which triggers an avalanche of current. This case occurs at the breakdown voltage. 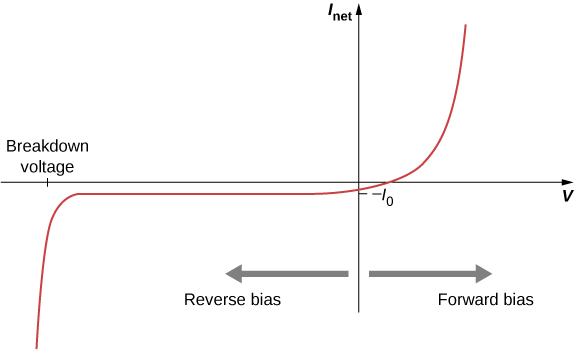 The reverse saturation current is

(The reverse saturation current is the current of a diode in a reverse bias configuration such as this.) The battery voltage is 0.12 V. What is the diode temperature?

(Figure) can be written as

This ratio is much greater than one, so the second term on the left-hand side of the equation vanishes. Taking the natural log of both sides gives

The temperature is therefore

Significance The current moving through a diode in the forward and reverse bias configuration is sensitive to the temperature of the diode. If the potential energy supplied by the battery is large compared to the thermal energy of the diode’s surroundings,

then the forward bias current is very large compared to the reverse saturation current.

Check Your Understanding How does the magnitude of the forward bias current compare with the reverse bias current?

The forward bias current is much larger. To a good approximation, diodes permit current flow in only one direction.

Create a p–n junction and observe the behavior of a simple circuit for forward and reverse bias voltages. Visit this site to learn more about semiconductor diodes.

flows to the terminal. This causes a large collector current

to flow through the collector. The base current can be adjusted to control the large collector current. The current gain is therefore

A junction transistor has three parts: emitter, base, and collector. Voltage applied to the base acts as a valve to control electric current from the emitter to the collector. 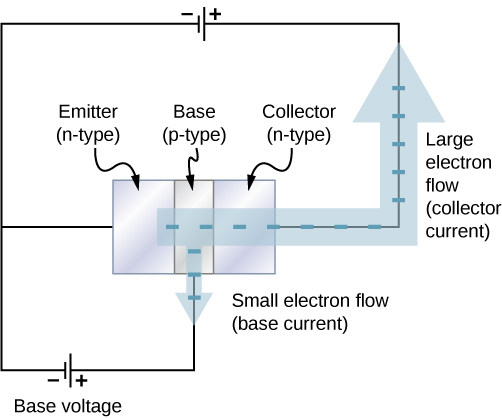 An audio amplifier based on a junction transistor. Voltage applied to the base by a microphone acts as a valve to control a larger electric current that passes through a loudspeaker. 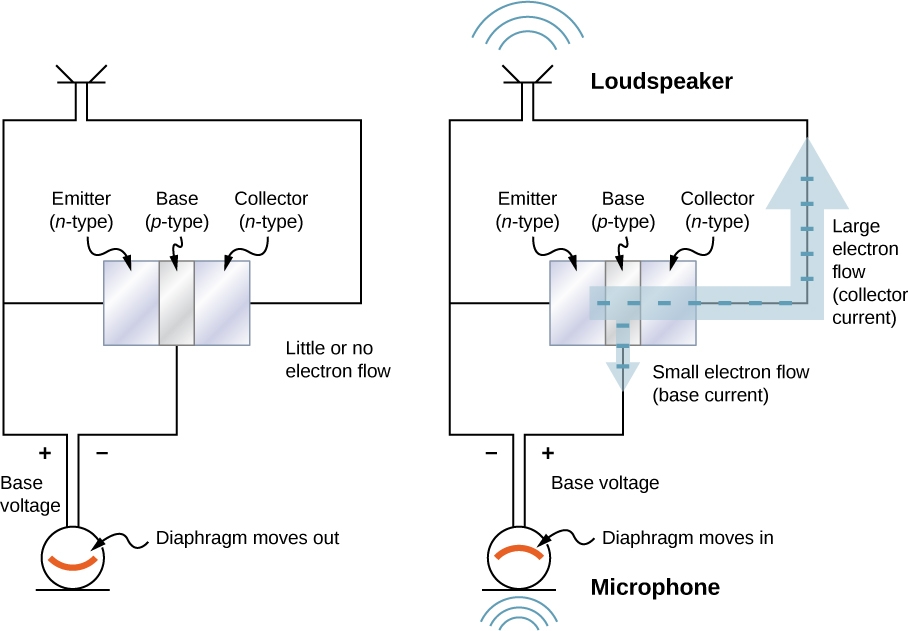 In modern electronic devices, digital signals are used with diodes and transistors to perform tasks such as data manipulation. Electric circuits carry two types of electrical signals: analog and digital ((Figure)). An analog signal varies continuously, whereas a digital signal switches between two fixed voltage values, such as plus 1 volt and zero volts. In digital circuits like those found in computers, a transistor behaves like an on-off switch. The transistor is either on, meaning the valve is completely open, or it is off, meaning the valve is completely closed. Integrated circuits contain vast collections of transistors on a single piece of silicon. They are designed to handle digital signals that represent ones and zeroes, which is also known as binary code. The invention of the ic helped to launch the modern computer revolution.

Real-world data are often analog, meaning data can vary continuously. Intensity values of sound or visual images are usually analog. These data are converted into digital signals for electronic processing in recording devices or computers. The digital signal is generated from the analog signal by requiring certain voltage cut-off value.

When p– and n-type materials are joined, why is a uniform electric field generated near the junction?

When p– and n-type materials are joined, why does the depletion layer not grow indefinitely?

The electric field produced by the uncovered ions reduces further diffusion. In equilibrium, the diffusion and drift currents cancel so the net current is zero. Therefore, the resistance of the depletion region is large.

How do you know if a diode is in the forward biased configuration?

Why does the reverse bias configuration lead to a very small current?

The positive terminal is applied to the n-side, which uncovers more ions near the junction (widens the depletion layer), increases the junction voltage difference, and therefore reduces the diffusion of holes across the junction.

What happens in the extreme case that where the n– and p-type materials are heavily doped?

Explain how an audio amplifier works, using the transistor concept.

Sound moves a diaphragm in and out, which varies the input or base current of the transistor circuit. The transistor amplifies this signal (p-n-p semiconductor). The output or collector current drives a speaker.

Show that for V less than zero,

A p-n diode has a reverse saturation current

. It is forward biased so that it has a current of

moving through it. What bias voltage is being applied if the temperature is 300 K?

The collector current of a transistor is 3.4 A for a base current of 4.2 mA. What is the current gain?

Applying the positive end of a battery to the p-side and the negative end to the n-side of a p-n junction, the measured current is

. Reversing this polarity give a reverse saturation current of

. What is the temperature if the bias voltage is 1.2 V?

The base current of a transistor is 4.4 A, and its current gain 1126. What is the collector current?

breakdown voltage
in a diode, the reverse bias voltage needed to cause an avalanche of current

junction transistor
electrical valve based on a p-n-p junction