Watch this NOVA video excerpt, Making Stuff Colder, as an introduction to the topic of superconductivity and its many applications.

Interestingly, the Meissner effect is not a consequence of the resistance being zero. To see why, suppose that a sample placed in a magnetic field undergoes a transition in which its resistance drops to zero. From Ohm’s law, the current density, j, in the sample is related to the net internal electric field, E, and the resistivity

is zero, E must also be zero so that j can remain finite. Now E and the magnetic flux

through the sample are related by Faraday’s law as

Another important property of a superconducting material is its critical temperature,

High-temperature superconducting materials are presently in use in various applications. An example is the production of magnetic fields in some particle accelerators. The ultimate goal is to discover materials that are superconducting at room temperature. Without any cooling requirements, the bulk of electronic components and transmission lines could be superconducting, resulting in dramatic and unprecedented increases in efficiency and performance.

The temperature dependence of the critical field for several superconductors. Superconductivity occurs for magnetic fields and temperatures below the curves shown. 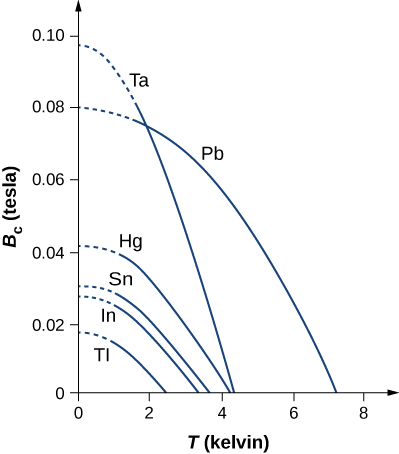 . When the field is below

type II superconductors are perfectly diamagnetic, and no magnetic flux penetration into the material can occur. For a field exceeding

they are driven into their normal state. When the field is greater than

type II superconductors are said to be in a mixed state. Although there is some magnetic flux penetration in the mixed state, the resistance of the material is zero. Within the superconductor, filament-like regions exist that have normal electrical and magnetic properties interspersed between regions that are superconducting with perfect diamagnetism. A representation of this state is given in (Figure). The magnetic field is expelled from the superconducting regions but exists in the normal regions. In general,

is very large compared with the critical fields of type I superconductors, so wire made of type II superconducting material is suitable for the windings of high-field magnets.

A schematic representation of the mixed state of a type II superconductor. Superconductors (the gray squares) expel magnetic fields in their vicinity. 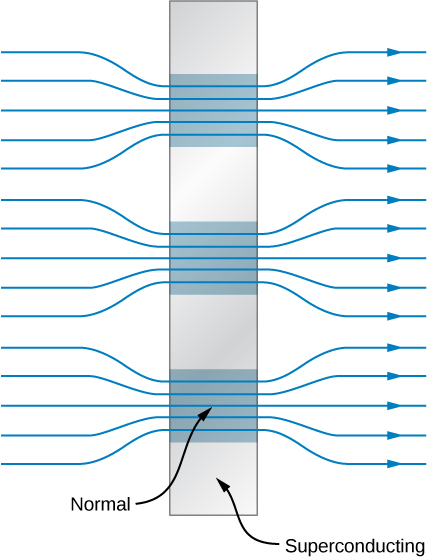 Niobium Wire In an experiment, a niobium (Nb) wire of radius 0.25 mm is immersed in liquid helium (

) and required to carry a current of 300 A. Does the wire remain superconducting?

the critical field for Nb is, from (Figure) and (Figure),

In an earlier chapter, we learned the magnetic field inside a current-carrying wire of radius a is given by

where r is the distance from the central axis of the wire. Thus, the field at the surface of the wire is

For the niobium wire, this field is

Since this exceeds the critical 0.16 T, the wire does not remain superconducting.

Check Your Understanding What conditions are necessary for superconductivity?

A successful theory of superconductivity was developed in the 1950s by John Bardeen, Leon Cooper, and J. Robert Schrieffer, for which they received the Nobel Prize in 1972. This theory is known as the BCS theory. BCS theory is complex, so we summarize it qualitatively below.

In a normal conductor, the electrical properties of the material are due to the most energetic electrons near the Fermi energy. In 1956, Cooper showed that if there is any attractive interaction between two electrons at the Fermi level, then the electrons can form a bound state in which their total energy is less than

. Two such electrons are known as a Cooper pair.

It is hard to imagine two electrons attracting each other, since they have like charge and should repel. However, the proposed interaction occurs only in the context of an atomic lattice. A depiction of the attraction is shown in (Figure). Electron 1 slightly displaces the positively charged atomic nuclei toward itself as it travels past because of the Coulomb attraction. Electron 2 “sees” a region with a higher density of positive charge relative to the surroundings and is therefore attracted into this region and, therefore indirectly, to electron 1. Because of the exclusion principle, the two electrons of a Cooper pair must have opposite spin.

A Cooper pair can form as a result of the displacement of positive atomic nuclei. Electron 1 slightly displaces the positively charged atomic nuclei toward itself as it travels past because of the Coulomb attraction. Electron 2 “sees” a region with a higher density of positive charge relative to the surroundings and is therefore attracted into this region. 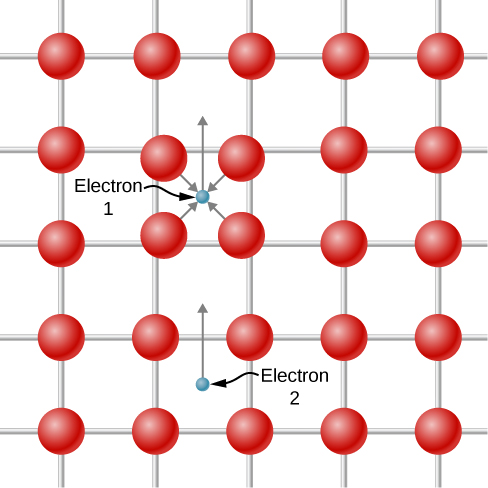 The BCS theory extends Cooper’s ideas, which are for a single pair of electrons, to the entire free electron gas. When the transition to the superconducting state occurs, all the electrons pair up to form Cooper pairs. On an atomic scale, the distance between the two electrons making up a Cooper pair is quite large. Between these electrons are typically about

other electrons, each also pairs with a distant electron. Hence, there is considerable overlap between the wave functions of the individual Cooper pairs, resulting in a strong correlation among the motions of the pairs. They all move together “in step,” like the members of a marching band. In the superconducting transition, the density of states becomes drastically changed near the Fermi level. As shown in (Figure), an energy gap appears around

because the collection of Cooper pairs has lower ground state energy than the Fermi gas of noninteracting electrons. The appearance of this gap characterizes the superconducting state. If this state is destroyed, then the gap disappears, and the density of states reverts to that of the free electron gas.

A relatively large energy gap is formed around the Fermi energy when a material becomes superconducting. If this state is destroyed, then the gap disappears, and the density of states reverts to that of the free electron gas. 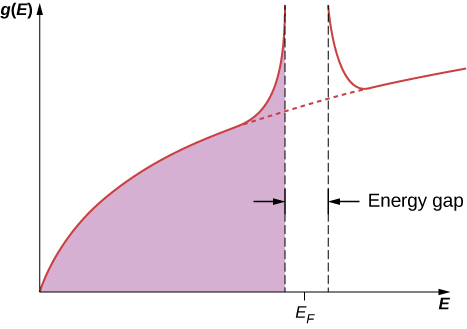 The BCS theory is able to predict many of the properties observed in superconductors. Examples include the Meissner effect, the critical temperature, the critical field, and, perhaps most importantly, the resistivity becoming zero at a critical temperature. We can think about this last phenomenon qualitatively as follows. In a normal conductor, resistivity results from the interaction of the conduction electrons with the lattice. In this interaction, the energy exchanged is on the order of

the thermal energy. In a superconductor, electric current is carried by the Cooper pairs. The only way for a lattice to scatter a Cooper pair is to break it up. The destruction of one pair then destroys the collective motion of all the pairs. This destruction requires energy on the order of

, which is the size of the energy gap. Below the critical temperature, there is not enough thermal energy available for this process, so the Cooper pairs travel unimpeded throughout the superconductor.

Finally, it is interesting to note that no evidence of superconductivity has been found in the best normal conductors, such as copper and silver. This is not unexpected, given the BCS theory. The basis for the formation of the superconducting state is an interaction between the electrons and the lattice. In the best conductors, the electron-lattice interaction is weakest, as evident from their minimal resistivity. We might expect then that in these materials, the interaction is so weak that Cooper pairs cannot be formed, and superconductivity is therefore precluded.

How does BCS theory explain superconductivity?

What is the Meissner effect?

What impact does an increasing magnetic field have on the critical temperature of a semiconductor?

As the magnitude of the magnetic field is increased, the critical temperature decreases.

, is the critical field of a superconductor one-half its value at

What is the critical magnetic field for lead at

A Pb wire wound in a tight solenoid of diameter of 4.0 mm is cooled to a temperature of 5.0 K. The wire is connected in series with a

resistor and a variable source of emf. As the emf is increased, what value does it have when the superconductivity of the wire is destroyed?

A tightly wound solenoid at 4.0 K is 50 cm long and is constructed from Nb wire of radius 1.5 mm. What maximum current can the solenoid carry if the wire is to remain superconducting?

Potassium fluoride (KF) is a molecule formed by an ionic bond. At equilibrium separation the atoms are

apart. Determine the electrostatic potential energy of the atoms. The electron affinity of F is 3.40 eV and the ionization energy of K is 4.34 eV. Determine dissociation energy. (Neglect the energy of repulsion.)

For the preceding problem, sketch the potential energy versus separation graph for the bonding of

The separation between hydrogen atoms in a

molecule is about 0.075 nm. Determine the characteristic energy of rotation in eV.

The characteristic energy of the

. Determine the separation distance between the nitrogen atoms.

A carbon atom can hybridize in the

configuration. (a) What is the angle between the hybrid orbitals?

Why is bonding in

favorable? Express your answer in terms of the symmetry of the electron wave function.

Astronomers claim to find evidence of

from light spectra of a distant star. Do you believe them?

No, He atoms do not contain valence electrons that can be shared in the formation of a chemical bond.

Show that the moment of inertia of a diatomic molecule is

is the reduced mass, and

is the distance between the masses.

Measurements of a superconductor’s critical magnetic field (in T) at various temperatures (in K) are given below. Use a line of best fit to determine

Estimate the fraction of Si atoms that must be replaced by As atoms in order to form an impurity band.

An impurity band will be formed when the density of the donor atoms is high enough that the orbits of the extra electrons overlap. We saw earlier that the orbital radius is about 50 Angstroms, so the maximum distance between the impurities for a band to form is 100 Angstroms. Thus if we use 1 Angstrom as the interatomic distance between the Si atoms, we find that 1 out of 100 atoms along a linear chain must be a donor atom. And in a three-dimensional crystal, roughly 1 out of

atoms must be replaced by a donor atom in order for an impurity band to form.

Transition in the rotation spectrum are observed at ordinary room temperature (

). According to your lab partner, a peak in the spectrum corresponds to a transition from the

state. Is this possible? If so, determine the momentum of inertia of the molecule.

Find the average energy of an electron in a Zn wire.

What value of the repulsion constant, n, gives the measured dissociation energy of 158 kcal/mol for CsCl?

A physical model of a diamond suggests a BCC packing structure. Why is this not possible?

For an electron in a three-dimensional metal, show that the average energy is given by

Where N is the total number electrons in the metal.

In three dimensions, the energy of an electron is given by:

. Each allowed energy state corresponds to node in N space

. The number of particles corresponds to the number of states (nodes) in the first octant, within a sphere of radius, R. This number is given by:

where the factor 2 accounts for two states of spin. The density of states is found by differentiating this expression by energy:

BCS theory
theory of superconductivity based on electron-lattice-electron interactions

type I superconductor
superconducting element, such as aluminum or mercury

type II superconductor
superconducting compound or alloy, such as a transition metal or an actinide series element