Two of Einstein’s influential ideas introduced in 1905 were the theory of special relativity and the concept of a light quantum, which we now call a photon. Beyond 1905, Einstein went further to suggest that freely propagating electromagnetic waves consisted of photons that are particles of light in the same sense that electrons or other massive particles are particles of matter. A beam of monochromatic light of wavelength

(or equivalently, of frequency f) can be seen either as a classical wave or as a collection of photons that travel in a vacuum with one speed, c (the speed of light), and all carrying the same energy,

This idea proved useful for explaining the interactions of light with particles of matter.

Momentum of a Photon

a photon is massless. In a vacuum, unlike a particle of matter that may vary its speed but cannot reach the speed of light, a photon travels at only one speed, which is exactly the speed of light. From the point of view of Newtonian classical mechanics, these two characteristics imply that a photon should not exist at all. For example, how can we find the linear momentum or kinetic energy of a body whose mass is zero? This apparent paradox vanishes if we describe a photon as a relativistic particle. According to the theory of special relativity, any particle in nature obeys the relativistic energy equation

This relation can also be applied to a photon. In (Figure), E is the total energy of a particle, p is its linear momentum, and

is its rest mass. For a photon, we simply set

in this equation. This leads to the expression for the momentum

is the same as that of a light quantum of frequency f, which we introduced to explain the photoelectric effect:

The wave relation that connects frequency f with wavelength

Therefore, a photon can be equivalently characterized by either its energy and wavelength, or its frequency and momentum. (Figure) and (Figure) can be combined into the explicit relation between a photon’s momentum and its wavelength:

and is called the wave number. Notice that this equation does not introduce any new physics. We can verify that the magnitude of the vector in (Figure) is the same as that given by (Figure).

To explain the shift in wavelengths measured in the experiment, Compton used Einstein’s idea of light as a particle. The Compton effect has a very important place in the history of physics because it shows that electromagnetic radiation cannot be explained as a purely wave phenomenon. The explanation of the Compton effect gave a convincing argument to the physics community that electromagnetic waves can indeed behave like a stream of photons, which placed the concept of a photon on firm ground.

The schematics of Compton’s experimental setup are shown in (Figure). The idea of the experiment is straightforward: Monochromatic X-rays with wavelength

are incident on a sample of graphite (the “target”), where they interact with atoms inside the sample; they later emerge as scattered X-rays with wavelength

with respect to the direction of the incident X-ray beam. This scattering angle,

of the incoming (incident) beam; and for a given scattering angle

we measure the intensity and the wavelength

we measure two intensity peaks. One peak is located at the wavelength

which is the wavelength of the incident beam. The other peak is located at some other wavelength,

The two peaks are separated by

which depends on the scattering angle

of the outgoing beam (in the direction of observation). The separation

is called the Compton shift. 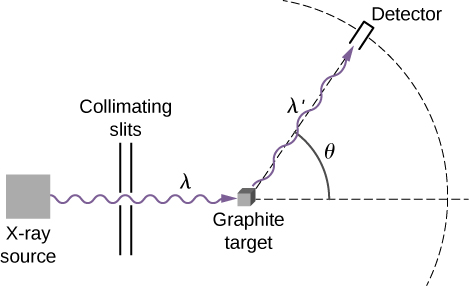 Experimental data show the Compton effect for X-rays scattering off graphite at various angles: The intensity of the scattered beam has two peaks. One peak appears at the wavelength

of the incident radiation and the second peak appears at wavelength

between the peaks depends on the scattering angle

which is the angular position of the detector in (Figure). The experimental data in this figure are plotted in arbitrary units so that the height of the profile reflects the intensity of the scattered beam above background noise.

As given by Compton, the explanation of the Compton shift is that in the target material, graphite, valence electrons are loosely bound in the atoms and behave like free electrons. Compton assumed that the incident X-ray radiation is a stream of photons. An incoming photon in this stream collides with a valence electron in the graphite target. In the course of this collision, the incoming photon transfers some part of its energy and momentum to the target electron and leaves the scene as a scattered photon. This model explains in qualitative terms why the scattered radiation has a longer wavelength than the incident radiation. Put simply, a photon that has lost some of its energy emerges as a photon with a lower frequency, or equivalently, with a longer wavelength. To show that his model was correct, Compton used it to derive the expression for the Compton shift. In his derivation, he assumed that both photon and electron are relativistic particles and that the collision obeys two commonsense principles: (1) the conservation of linear momentum and (2) the conservation of total relativistic energy.

In the following derivation of the Compton shift,

denote the energy and momentum, respectively, of an incident photon with frequency f. The photon collides with a relativistic electron at rest, which means that immediately before the collision, the electron’s energy is entirely its rest mass energy,

Immediately after the collision, the electron has energy E and momentum

both of which satisfy (Figure). Immediately after the collision, the outgoing photon has energy

as illustrated in (Figure). The scattering angle

is the angle between the momentum vectors

and we can write their scalar product:

Following Compton’s argument, we assume that the colliding photon and electron form an isolated system. This assumption is valid for weakly bound electrons that, to a good approximation, can be treated as free particles. Our first equation is the conservation of energy for the photon-electron system:

The left side of this equation is the momentum of the system right before the collision, and the right side of the equation is the momentum of the system right after collision. The entire physics of Compton scattering is contained in these three preceding equations––the remaining part is algebra. At this point, we could jump to the concluding formula for the Compton shift, but it is beneficial to highlight the main algebraic steps that lead to Compton’s formula, which we give here as follows.

We start with rearranging the terms in (Figure) and squaring it:

In the next step, we substitute (Figure) for

simplify, and divide both sides by

Now we can use (Figure) to express this form of the energy equation in terms of momenta. The result is

we turn to the momentum equation (Figure), rearrange its terms, and square it to obtain

The product of the momentum vectors is given by (Figure). When we substitute this result for

in (Figure), we obtain the energy equation that contains the scattering angle

With further algebra, this result can be simplified to

When these relations are substituted into (Figure), we obtain the relation for the Compton shift:

is called the Compton wavelength of the electron:

Denoting the shift as

the concluding result can be rewritten as

This formula for the Compton shift describes outstandingly well the experimental results shown in (Figure). Scattering data measured for molybdenum, graphite, calcite, and many other target materials are in accord with this theoretical result. The nonshifted peak shown in (Figure) is due to photon collisions with tightly bound inner electrons in the target material. Photons that collide with the inner electrons of the target atoms in fact collide with the entire atom. In this extreme case, the rest mass in (Figure) must be changed to the rest mass of the atom. This type of shift is four orders of magnitude smaller than the shift caused by collisions with electrons and is so small that it can be neglected.

Compton Scattering An incident 71-pm X-ray is incident on a calcite target. Find the wavelength of the X-ray scattered at a

angle. What is the largest shift that can be expected in this experiment?

Strategy To find the wavelength of the scattered X-ray, first we must find the Compton shift for the given scattering angle,

We use (Figure). Then we add this shift to the incident wavelength to obtain the scattered wavelength. The largest Compton shift occurs at the angle

has the largest value, which is for the angle

Solution The shift at

This gives the scattered wavelength:

The largest shift is

Significance The largest shift in wavelength is detected for the backscattered radiation; however, most of the photons from the incident beam pass through the target and only a small fraction of photons gets backscattered (typically, less than 5%). Therefore, these measurements require highly sensitive detectors.

Check Your Understanding An incident 71-pm X-ray is incident on a calcite target. Find the wavelength of the X-ray scattered at a

angle. What is the smallest shift that can be expected in this experiment?

Discuss any similarities and differences between the photoelectric and the Compton effects.

Which has a greater momentum: an UV photon or an IR photon?

Can the Compton effect occur with visible light? If so, will it be detectable?

Is it possible in the Compton experiment to observe scattered X-rays that have a shorter wavelength than the incident X-ray radiation?

Show that the Compton wavelength has the dimension of length.

What is the momentum of a 589-nm yellow photon?

What is the momentum of a 4-cm microwave photon?

In a beam of white light (wavelengths from 400 to 750 nm), what range of momentum can the photons have?

What is the energy of a photon whose momentum is

Find the momentum and energy of a 1.0-Å photon.

Find the wavelength and energy of a photon with momentum

-ray photon has a momentum of

Find its wavelength and energy.

(a) Calculate the momentum of a

photon. (b) Find the velocity of an electron with the same momentum. (c) What is the kinetic energy of the electron, and how does it compare to that of the photon?

are consistent with the relativistic formula

is its wavelength in meters.

For collisions with free electrons, compare the Compton shift of a photon scattered as an angle of

to that of a photon scattered at

X-rays of wavelength 12.5 pm are scattered from a block of carbon. What are the wavelengths of photons scattered at (a)

that has the direction of the photon’s linear momentum