To illustrate the momentum-position uncertainty principle, consider a free particle that moves along the x-direction. The particle moves with a constant velocity u and momentum

. According to de Broglie’s relations,

. As discussed in the previous section, the wave function for this particle is given by

and the probability density

is uniform and independent of time. The particle is equally likely to be found anywhere along the x-axis but has definite values of wavelength and wave number, and therefore momentum. The uncertainty of position is infinite (we are completely uncertain about position) and the uncertainty of the momentum is zero (we are completely certain about momentum). This account of a free particle is consistent with Heisenberg’s uncertainty principle.

Similar statements can be made of localized particles. In quantum theory, a localized particle is modeled by a linear superposition of free-particle (or plane-wave) states called a wave packet. An example of a wave packet is shown in (Figure). A wave packet contains many wavelengths and therefore by de Broglie’s relations many momenta—possible in quantum mechanics! This particle also has many values of position, although the particle is confined mostly to the interval

. The particle can be better localized

is increased). According to Heisenberg, these uncertainties obey the following relation.

This relation expresses Heisenberg’s uncertainty principle. It places limits on what we can know about a particle from simultaneous measurements of position and momentum. If

is small, and vice versa. (Figure) can be derived in a more advanced course in modern physics. Reflecting on this relation in his work The Physical Principles of the Quantum Theory, Heisenberg wrote “Any use of the words ‘position’ and ‘velocity’ with accuracy exceeding that given by [the relation] is just as meaningless as the use of words whose sense is not defined.”

Adding together several plane waves of different wavelengths can produce a wave that is relatively localized. 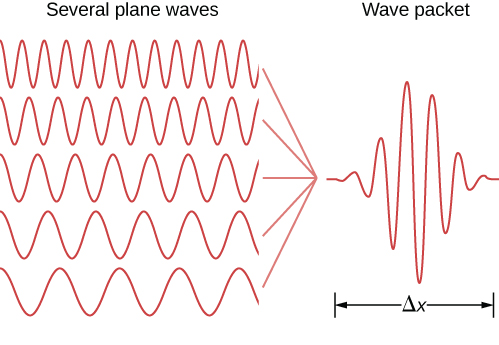 Note that the uncertainty principle has nothing to do with the precision of an experimental apparatus. Even for perfect measuring devices, these uncertainties would remain because they originate in the wave-like nature of matter. The precise value of the product

depends on the specific form of the wave function. Interestingly, the Gaussian function (or bell-curve distribution) gives the minimum value of the uncertainty product:

Strategy Given the uncertainty in speed

, we have to first determine the uncertainty in momentum

and then invert (Figure) to find the uncertainty in position

The ground-state wave function of this system is a half wave, like that given in (Figure). This is the largest wavelength that can “fit” in the box, so the wave function corresponds to the lowest energy state. Note that this function is very similar in shape to a Gaussian (bell curve) function. We can take the average energy of a particle described by this function (E) as a good estimate of the ground state energy

with the standard deviation of position

, and the uncertainty of momentum

with the standard deviation of momentum

. For the Gaussian function, the uncertainty product is

The particle is equally likely to be moving left as moving right, so

. Also, the uncertainty of position is comparable to the size of the box, so

Multiplying numerator and denominator by

is often a useful value in performing calculations in quantum mechanics.)

Another kind of uncertainty principle concerns uncertainties in simultaneous measurements of the energy of a quantum state and its lifetime,

is the uncertainty in the energy measurement and

is the uncertainty in the lifetime measurement. The energy-time uncertainty principle does not result from a relation of the type expressed by (Figure) for technical reasons beyond this discussion. Nevertheless, the general meaning of the energy-time principle is that a quantum state that exists for only a short time cannot have a definite energy. The reason is that the frequency of a state is inversely proportional to time and the frequency connects with the energy of the state, so to measure the energy with good precision, the state must be observed for many cycles.

. Is the emitted radiation monochromatic?

Strategy We invert (Figure) to obtain the energy uncertainty

and combine it with the photon energy

. To estimate whether or not the emission is monochromatic, we evaluate

Solution The spread in photon energies is

Significance Because the emitted photons have their frequencies within

percent of the average frequency, the emitted radiation can be considered monochromatic.

Check Your Understanding A sodium atom makes a transition from the first excited state to the ground state, emitting a 589.0-nm photon with energy 2.105 eV. If the lifetime of this excited state is

, what is the uncertainty in energy of this excited state? What is the width of the corresponding spectral line?

Can we measure the energy of a free localized particle with complete precision?

Can we measure both the position and momentum of a particle with complete precision?

A velocity measurement of an

-particle has been performed with a precision of 0.02 mm/s. What is the minimum uncertainty in its position?

If the uncertainty in the

-component of a proton’s position is 2.0 pm, find the minimum uncertainty in the simultaneous measurement of the proton’s

-component of velocity. What is the minimum uncertainty in the simultaneous measurement of the proton’s

Some unstable elementary particle has a rest energy of 80.41 GeV and an uncertainty in rest energy of 2.06 GeV. Estimate the lifetime of this particle.

An atom in a metastable state has a lifetime of 5.2 ms. Find the minimum uncertainty in the measurement of energy of the excited state.

Measurements indicate that an atom remains in an excited state for an average time of 50.0 ns before making a transition to the ground state with the simultaneous emission of a 2.1-eV photon. (a) Estimate the uncertainty in the frequency of the photon. (b) What fraction of the photon’s average frequency is this?