The hydrogen atom is the simplest atom in nature and, therefore, a good starting point to study atoms and atomic structure. The hydrogen atom consists of a single negatively charged electron that moves about a positively charged proton ((Figure)). In Bohr’s model, the electron is pulled around the proton in a perfectly circular orbit by an attractive Coulomb force. The proton is approximately 1800 times more massive than the electron, so the proton moves very little in response to the force on the proton by the electron. (This is analogous to the Earth-Sun system, where the Sun moves very little in response to the force exerted on it by Earth.) An explanation of this effect using Newton’s laws is given in Photons and Matter Waves.

A representation of the Bohr model of the hydrogen atom. 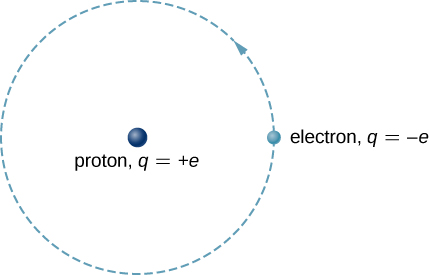 With the assumption of a fixed proton, we focus on the motion of the electron.

In the electric field of the proton, the potential energy of the electron is

Notice that the potential energy function U(r) does not vary in time. As a result, Schrödinger’s equation of the hydrogen atom reduces to two simpler equations: one that depends only on space (x, y, z) and another that depends only on time (t). (The separation of a wave function into space- and time-dependent parts for time-independent potential energy functions is discussed in Quantum Mechanics.) We are most interested in the space-dependent equation:

is the three-dimensional wave function of the electron,

is the product of the space-dependent wave function

and the time-dependent wave function

In addition to being time-independent, U(r) is also spherically symmetrical. This suggests that we may solve Schrödinger’s equation more easily if we express it in terms of the spherical coordinates

instead of rectangular coordinates

is the polar angle (relative to the vertical z-axis), and

is the azimuthal angle (relative to the x-axis). The relationship between spherical and rectangular coordinates is

The relationship between the spherical and rectangular coordinate systems. 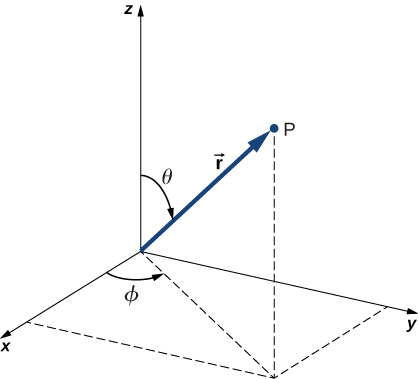 is the magnitude of a vector formed by the projection of the polar vector onto the xy-plane. Also, the coordinates of x and y are obtained by projecting this vector onto the x– and y-axes, respectively. The inverse transformation gives

Schrödinger’s wave equation for the hydrogen atom in spherical coordinates is discussed in more advanced courses in modern physics, so we do not consider it in detail here. However, due to the spherical symmetry of U(r), this equation reduces to three simpler equations: one for each of the three coordinates

Solutions to the time-independent wave function are written as a product of three functions:

where R is the radial function dependent on the radial coordinate r only;

is the polar function dependent on the polar coordinate

is the phi function of

only. Valid solutions to Schrödinger’s equation

are labeled by the quantum numbers n, l, and m.

(The reasons for these names will be explained in the next section.) The radial function R depends only on n and l; the polar function

depends only on l and m; and the phi function

depends only on m. The dependence of each function on quantum numbers is indicated with subscripts:

Notice that for the ground state,

. In other words, there is only one quantum state with the wave function for

Therefore, the allowed states for the

. Example wave functions for the hydrogen atom are given in (Figure). Note that some of these expressions contain the letter i, which represents

. When probabilities are calculated, these complex numbers do not appear in the final answer.

Physical Significance of the Quantum Numbers

. According to Schrödinger’s equation:

Notice that this expression is identical to that of Bohr’s model. As in the Bohr model, the electron in a particular state of energy does not radiate.

How Many Possible States? For the hydrogen atom, how many possible quantum states correspond to the principal number

? What are the energies of these states?

Strategy For a hydrogen atom of a given energy, the number of allowed states depends on its orbital angular momentum. We can count these states for each value of the principal quantum number,

However, the total energy depends on the principal quantum number only, which means that we can use (Figure) and the number of states counted.

allowed states. Because the total energy depends only on the principal quantum number,

, the energy of each of these states is

, the magnitude of its orbital angular momentum is

This result is slightly different from that found with Bohr’s theory, which quantizes angular momentum according to the rule

The ground state of hydrogen is designated as the 1s state, where “1” indicates the energy level

state is designated “2s.” The

state is designated “2p.” When

(see (Figure)) and is related to the z-component of orbital angular momentum of an electron in a hydrogen atom. This component is given by

is given in (Figure).

The z-component of angular momentum is quantized with its own quantum number m. 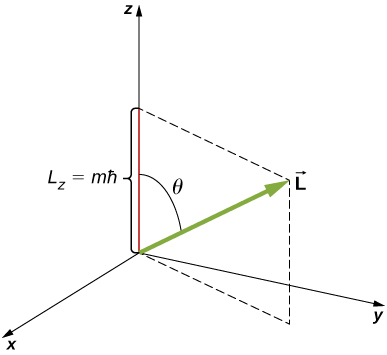 is equivalent to the quantization of

for L and m for

into this equation, we find

is quantized with the particular values

Notice that both the polar angle (

The quantization of the polar angle for the

state is shown in (Figure). The orbital angular momentum vector lies somewhere on the surface of a cone with an opening angle

relative to the z-axis (unless

and the vector points are perpendicular to the z-axis).

The quantization of orbital angular momentum. Each vector lies on the surface of a cone with axis along the z-axis. 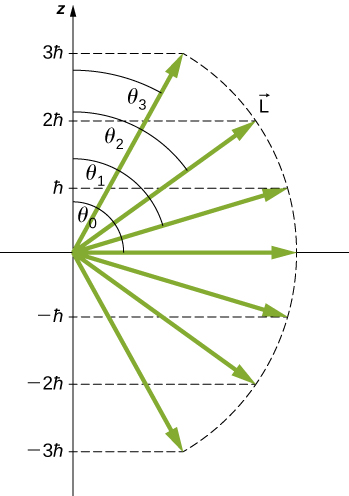 , with certainty. As a result, the precise direction of the orbital angular momentum vector is unknown.

What Are the Allowed Directions? Calculate the angles that the angular momentum vector

can make with the z-axis for

The component of a given angular momentum along the z-axis (defined by the direction of a magnetic field) can have only certain values. These are shown here for

is quantized in the sense that it can have only certain angles relative to the z-axis. 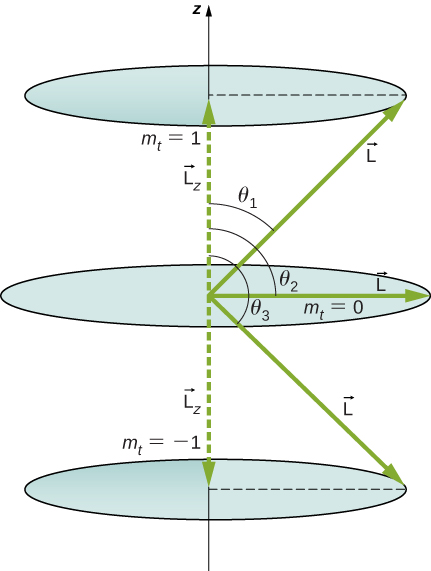 (in the z-direction) form a right triangle, where

is the hypotenuse and

is the adjacent side. The ratio of

| is the cosine of the angle of interest. The magnitudes

Solution We are given

Thus, L has the value given by

can have three values, given by

As you can see in (Figure),

Significance The angles are consistent with the figure. Only the angle relative to the z-axis is quantized. L can point in any direction as long as it makes the proper angle with the z-axis. Thus, the angular momentum vectors lie on cones, as illustrated. To see how the correspondence principle holds here, consider that the smallest angle (

in the example) is for the maximum value of

For that smallest angle,

which approaches 1 as l becomes very large. If

. Furthermore, for large l, there are many values of

, so that all angles become possible as l gets very large.

Check Your Understanding Can the magnitude of

ever be equal to L?

No. The quantum number

Thus, the magnitude of

is always less than L because

where dV is an infinitesimal volume element. If this integral is computed for all space, the result is 1, because the probability of the particle to be located somewhere is 100% (the normalization condition). In a more advanced course on modern physics, you will find that

is the complex conjugate. This eliminates the occurrences of

in the above calculation.

Consider an electron in a state of zero angular momentum (

). In this case, the electron’s wave function depends only on the radial coordinate r. (Refer to the states

in (Figure).) The infinitesimal volume element corresponds to a spherical shell of radius r and infinitesimal thickness dr, written as

The probability of finding the electron in the region r to

(“at approximately r”) is

angstroms. The radial probability density function P(r) is plotted in (Figure). The area under the curve between any two radial positions, say

, gives the probability of finding the electron in that radial range. To find the most probable radial position, we set the first derivative of this function to zero (

is not symmetrical about its peak value.

The radial probability density function for the ground state of hydrogen. 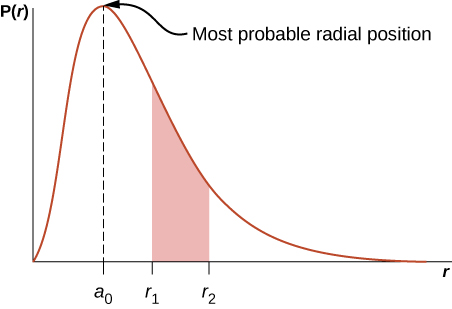 If the electron has orbital angular momentum (

), then the wave functions representing the electron depend on the angles

). Atomic orbitals for three states with

are shown in (Figure). An atomic orbital is a region in space that encloses a certain percentage (usually 90%) of the electron probability. (Sometimes atomic orbitals are referred to as “clouds” of probability.) Notice that these distributions are pronounced in certain directions. This directionality is important to chemists when they analyze how atoms are bound together to form molecules.

The probability density distributions for three states with

A slightly different representation of the wave function is given in (Figure). In this case, light and dark regions indicate locations of relatively high and low probability, respectively. In contrast to the Bohr model of the hydrogen atom, the electron does not move around the proton nucleus in a well-defined path. Indeed, the uncertainty principle makes it impossible to know how the electron gets from one place to another. 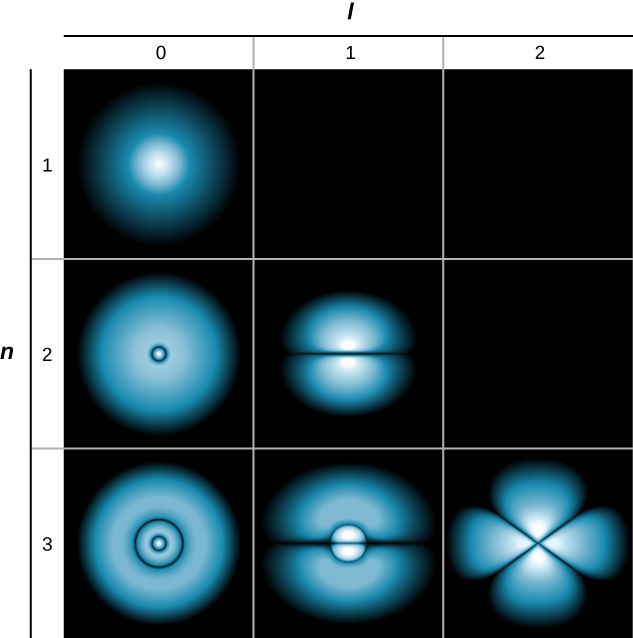 Identify the physical significance of each of the quantum numbers of the hydrogen atom.

z-component of the orbital angular momentum

Describe the ground state of hydrogen in terms of wave function, probability density, and atomic orbitals.

Distinguish between Bohr’s and Schrödinger’s model of the hydrogen atom. In particular, compare the energy and orbital angular momentum of the ground states.

, and in Schrödinger’s model,

The wave function is evaluated at rectangular coordinates (

(2, 1, 1) in arbitrary units. What are the spherical coordinates of this position?

If an atom has an electron in the

, what are the possible values of l?

What, if any, constraints does a value of

place on the other quantum numbers for an electron in an atom?

electron? (b) Calculate the value of the smallest angle.

The force on an electron is “negative the gradient of the potential energy function.” Use this knowledge and (Figure) to show that the force on the electron in a hydrogen atom is given by Coulomb’s force law.

What is the total number of states with orbital angular momentum

The wave function is evaluated at spherical coordinates

where the value of the radial coordinate is given in arbitrary units. What are the rectangular coordinates of this position?

Coulomb’s force law states that the force between two charged particles is:

Use this expression to determine the potential energy function.

Write an expression for the total number of states with orbital angular momentum l.

For the orbital angular momentum quantum number, l, the allowed values of:

.
With the exception of

, the total number is just 2l because the number of states on either side of

is just l. Including

Consider hydrogen in the ground state,

. (a) Use the derivative to determine the radial position for which the probability density, P(r), is a maximum.

(b) Use the integral concept to determine the average radial position. (This is called the expectation value of the electron’s radial position.) Express your answers into terms of the Bohr radius,

. Hint: The expectation value is the just average value. (c) Why are these values different?

What is the probability that the 1s electron of a hydrogen atom is found outside the Bohr radius?

How many polar angles are possible for an electron in the