3 The Law of Reflection

Whenever we look into a mirror, or squint at sunlight glinting from a lake, we are seeing a reflection. When you look at a piece of white paper, you are seeing light scattered from it. Large telescopes use reflection to form an image of stars and other astronomical objects.

The law of reflection is illustrated in (Figure), which also shows how the angle of incidence and angle of reflection are measured relative to the perpendicular to the surface at the point where the light ray strikes.

The angles are measured relative to the perpendicular to the surface at the point where the ray strikes the surface. 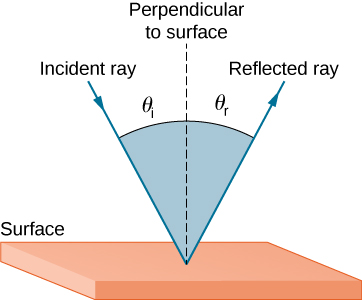 We expect to see reflections from smooth surfaces, but (Figure) illustrates how a rough surface reflects light. Since the light strikes different parts of the surface at different angles, it is reflected in many different directions, or diffused. Diffused light is what allows us to see a sheet of paper from any angle, as shown in (Figure)(a). People, clothing, leaves, and walls all have rough surfaces and can be seen from all sides. A mirror, on the other hand, has a smooth surface (compared with the wavelength of light) and reflects light at specific angles, as illustrated in (Figure)(b). When the Moon reflects from a lake, as shown in (Figure)(c), a combination of these effects takes place.

Light is diffused when it reflects from a rough surface. Here, many parallel rays are incident, but they are reflected at many different angles, because the surface is rough. 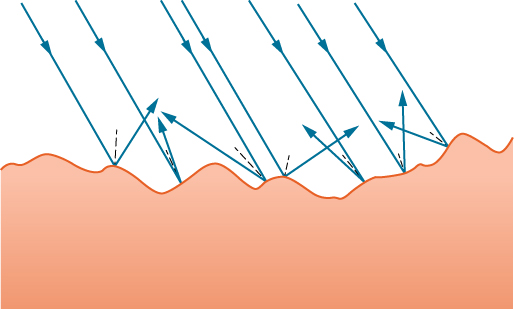 (a) When a sheet of paper is illuminated with many parallel incident rays, it can be seen at many different angles, because its surface is rough and diffuses the light. (b) A mirror illuminated by many parallel rays reflects them in only one direction, because its surface is very smooth. Only the observer at a particular angle sees the reflected light. (c) Moonlight is spread out when it is reflected by the lake, because the surface is shiny but uneven. (credit c: modification of work by Diego Torres Silvestre)

When you see yourself in a mirror, it appears that the image is actually behind the mirror ((Figure)). We see the light coming from a direction determined by the law of reflection. The angles are such that the image is exactly the same distance behind the mirror as you stand in front of the mirror. If the mirror is on the wall of a room, the images in it are all behind the mirror, which can make the room seem bigger. Although these mirror images make objects appear to be where they cannot be (like behind a solid wall), the images are not figments of your imagination. Mirror images can be photographed and videotaped by instruments and look just as they do with our eyes (which are optical instruments themselves). The precise manner in which images are formed by mirrors and lenses is discussed in an upcoming chapter on Geometric Optics and Image Formation.

(a) Your image in a mirror is behind the mirror. The two rays shown are those that strike the mirror at just the correct angles to be reflected into the eyes of the person. The image appears to be behind the mirror at the same distance away as (b) if you were looking at your twin directly, with no mirror.

A light ray that strikes an object consisting of two mutually perpendicular reflecting surfaces is reflected back exactly parallel to the direction from which it came ((Figure)). This is true whenever the reflecting surfaces are perpendicular, and it is independent of the angle of incidence. (For proof, see (Figure) at the end of this section.) Such an object is called a corner reflector, since the light bounces from its inside corner. Corner reflectors are a subclass of retroreflectors, which all reflect rays back in the directions from which they came. Although the geometry of the proof is much more complex, corner reflectors can also be built with three mutually perpendicular reflecting surfaces and are useful in three-dimensional applications.

A light ray that strikes two mutually perpendicular reflecting surfaces is reflected back exactly parallel to the direction from which it came. 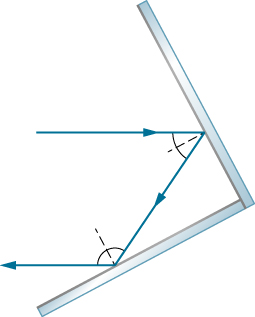 Many inexpensive reflector buttons on bicycles, cars, and warning signs have corner reflectors designed to return light in the direction from which it originated. Rather than simply reflecting light over a wide angle, retroreflection ensures high visibility if the observer and the light source are located together, such as a car’s driver and headlights. The Apollo astronauts placed a true corner reflector on the Moon ((Figure)). Laser signals from Earth can be bounced from that corner reflector to measure the gradually increasing distance to the Moon of a few centimeters per year.

Working on the same principle as these optical reflectors, corner reflectors are routinely used as radar reflectors ((Figure)) for radio-frequency applications. Under most circumstances, small boats made of fiberglass or wood do not strongly reflect radio waves emitted by radar systems. To make these boats visible to radar (to avoid collisions, for example), radar reflectors are attached to boats, usually in high places.

A radar reflector hoisted on a sailboat is a type of corner reflector. (credit: Tim Sheerman-Chase) 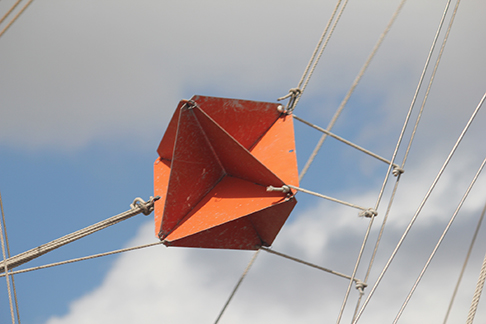 As a counterexample, if you are interested in building a stealth airplane, radar reflections should be minimized to evade detection. One of the design considerations would then be to avoid building

corners into the airframe.

Using the law of reflection, explain how powder takes the shine off of a person’s nose. What is the name of the optical effect? 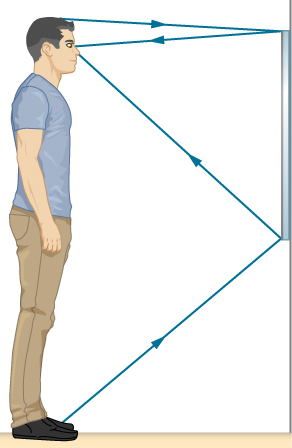 Show that when light reflects from two mirrors that meet each other at a right angle, the outgoing ray is parallel to the incoming ray, as illustrated below. 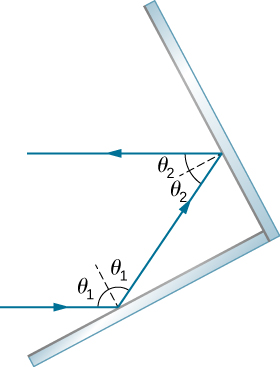 and Earth’s atmosphere (which varies in density with altitude) is equivalent to a layer 30.0 km thick with a constant index of refraction

A flat mirror is neither converging nor diverging. To prove this, consider two rays originating from the same point and diverging at an angle

(see below). Show that after striking a plane mirror, the angle between their directions remains 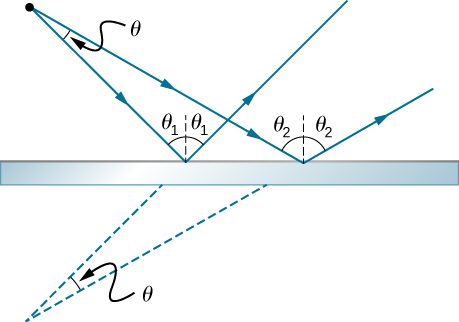 corner reflector
object consisting of two (or three) mutually perpendicular reflecting surfaces, so that the light that enters is reflected back exactly parallel to the direction from which it came