53 The Quantum Particle in a Box

In this section, we apply Schrӧdinger’s equation to a particle bound to a one-dimensional box. This special case provides lessons for understanding quantum mechanics in more complex systems. The energy of the particle is quantized as a consequence of a standing wave condition inside the box.

Consider a particle of mass

((Figure)). Between the walls, the particle moves freely. This physical situation is called the infinite square well, described by the potential energy function

The potential energy function that confines the particle in a one-dimensional box. 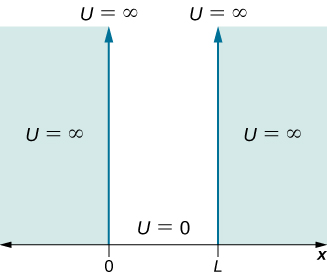 to this equation have a probabilistic interpretation. In particular, the square

The walls are rigid and impenetrable, which means that the particle is never found beyond the wall. Mathematically, this means that the solution must vanish at the walls:

We expect oscillating solutions, so the most general solution to this equation is

where k is the wave number, and

are constants. Applying the boundary condition expressed by (Figure) gives

, the solution must be

for all values of x and the normalization condition, (Figure), cannot be satisfied. Assuming

for this quantum number would be zero everywhere—an un-normalizable and therefore unphysical solution. Substituting (Figure) into (Figure) gives

Computing these derivatives leads to

According to de Broglie,

so this expression implies that the total energy is equal to the kinetic energy, consistent with our assumption that the “particle moves freely.” Combining the results of (Figure) and (Figure) gives

To evaluate the allowed wave functions that correspond to these energies, we must find the normalization constant

. We impose the normalization condition (Figure) on the wave function

Hence, the wave functions that correspond to the energy values given in (Figure) are

For the lowest energy state or ground state energy, we have

All other energy states can be expressed as

is the first excited state, the state for

is the second excited state, and so on. The first three quantum states (for

of a particle in a box are shown in (Figure).

The wave functions in (Figure) are sometimes referred to as the “states of definite energy.” Particles in these states are said to occupy energy levels, which are represented by the horizontal lines in (Figure). Energy levels are analogous to rungs of a ladder that the particle can “climb” as it gains or loses energy.

The wave functions in (Figure) are also called stationary states and standing wave states. These functions are “stationary,” because their probability density functions,

, do not vary in time, and “standing waves” because their real and imaginary parts oscillate up and down like a standing wave—like a rope waving between two children on a playground. Stationary states are states of definite energy [(Figure)], but linear combinations of these states, such as

(also solutions to Schrӧdinger’s equation) are states of mixed energy.

: (a) standing wave solutions and (b) allowed energy states. 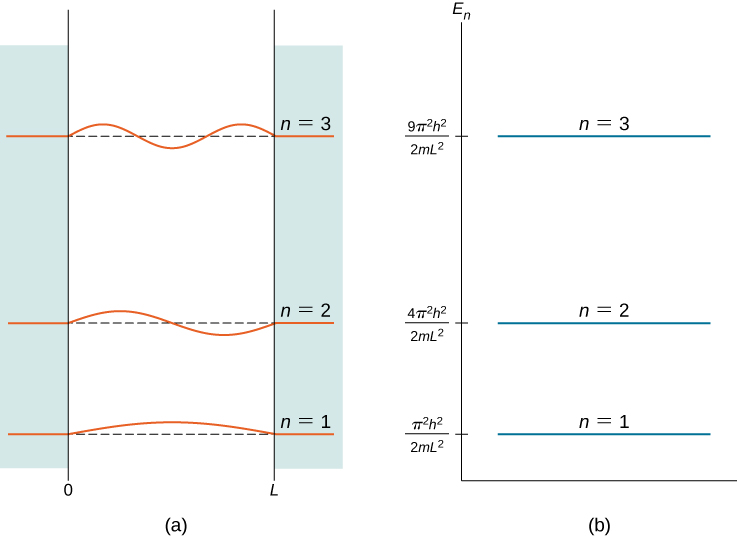 Energy quantization is a consequence of the boundary conditions. If the particle is not confined to a box but wanders freely, the allowed energies are continuous. However, in this case, only certain energies

…) are allowed. The energy difference between adjacent energy levels is given by

Conservation of energy demands that if the energy of the system changes, the energy difference is carried in some other form of energy. For the special case of a charged particle confined to a small volume (for example, in an atom), energy changes are often carried away by photons. The frequencies of the emitted photons give us information about the energy differences (spacings) of the system and the volume of containment—the size of the “box” [see (Figure)].

Strategy If we assume that the proton confined in the nucleus can be modeled as a quantum particle in a box, all we need to do is to use (Figure) to find its energies

. The mass of a proton is

The emitted photon carries away the energy difference

We can use the relation

to find its frequency f.

The energy of the emitted photon is

The frequency of the emitted photon is

Significance This is the typical frequency of a gamma ray emitted by a nucleus. The energy of this photon is about 10 million times greater than that of a visible light photon.

We can also find the expectation value of the momentum or average momentum of a large number of particles in a given state:

The result is not surprising because the standing wave state is a state of definite energy. Any energy measurement of this system must return a value equal to one of these allowed energies.

for a quantum particle in a box for: (a) the ground state,

; (b) the first excited state,

; and, (c) the nineteenth excited state, 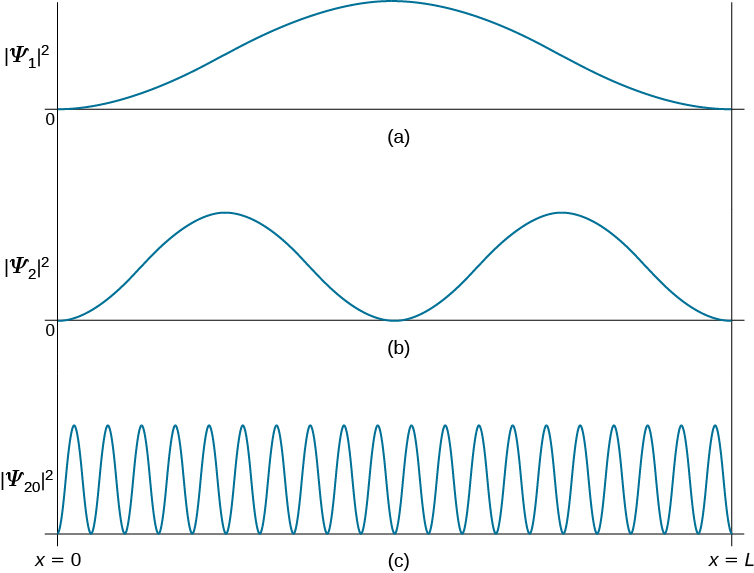 The probability density of finding a classical particle between x and

depends on how much time

the particle spends in this region. Assuming that its speed u is constant, this time is

does not depend on where this interval is located between the walls.

A Classical Particle in a Box A small 0.40-kg cart is moving back and forth along an air track between two bumpers located 2.0 m apart. We assume no friction; collisions with the bumpers are perfectly elastic so that between the bumpers, the car maintains a constant speed of 0.50 m/s. Treating the cart as a quantum particle, estimate the value of the principal quantum number that corresponds to its classical energy.

as though it were a quantum particle. The energy of the cart is completely kinetic, so

Solution The kinetic energy of the cart is

The ground state of the cart, treated as a quantum particle, is

Significance We see from this example that the energy of a classical system is characterized by a very large quantum number. Bohr’s correspondence principle concerns this kind of situation. We can apply the formalism of quantum mechanics to any kind of system, quantum or classical, and the results are correct in each case. In the limit of high quantum numbers, there is no advantage in using quantum formalism because we can obtain the same results with the less complicated formalism of classical mechanics. However, we cannot apply classical formalism to a quantum system in a low-number energy state.

. What is the probability of finding a quantum particle in its ground state somewhere between

? (b) Repeat question (a) for a classical particle.

Having found the stationary states

by solving the time-independent Schrӧdinger equation (Figure), we use (Figure) to write wave functions

that are solutions of the time-dependent Schrӧdinger’s equation given by (Figure). For a particle in a box this gives

where the energies are given by (Figure).

The quantum particle in a box model has practical applications in a relatively newly emerged field of optoelectronics, which deals with devices that convert electrical signals into optical signals. This model also deals with nanoscale physical phenomena, such as a nanoparticle trapped in a low electric potential bounded by high-potential barriers.

Using the quantum particle in a box model, describe how the possible energies of the particle are related to the size of the box.

Is it possible that when we measure the energy of a quantum particle in a box, the measurement may return a smaller value than the ground state energy? What is the highest value of the energy that we can measure for this particle?

to 1, which is infinity. (Note: Even particles with extremely large energies remain bound to an infinite square well—they can never “escape”)

For a quantum particle in a box, the first excited state

Assume that a proton in a nucleus can be treated as if it were confined to a one-dimensional box of width 10.0 fm. (a) What are the energies of the proton when it is in the states corresponding to

? (b) What are the energies of the photons emitted when the proton makes the transitions from the first and second excited states to the ground state?

An electron confined to a box has the ground state energy of 2.5 eV. What is the width of the box?

What is the ground state energy (in eV) of a proton confined to a one-dimensional box the size of the uranium nucleus that has a radius of approximately 15.0 fm?

What is the ground state energy (in eV) of an

-particle confined to a one-dimensional box the size of the uranium nucleus that has a radius of approximately 15.0 fm?

To excite an electron in a one-dimensional box from its first excited state to its third excited state requires 20.0 eV. What is the width of the box?

An electron confined to a box of width 0.15 nm by infinite potential energy barriers emits a photon when it makes a transition from the first excited state to the ground state. Find the wavelength of the emitted photon.

If the energy of the first excited state of the electron in the box is 25.0 eV, what is the width of the box?

Suppose an electron confined to a box emits photons. The longest wavelength that is registered is 500.0 nm. What is the width of the box?

molecules are kept at 300.0 K in a cubical container with a side length of 20.0 cm. Assume that you can treat the molecules as though they were moving in a one-dimensional box. (a) Find the ground state energy of the hydrogen molecule in the container. (b) Assume that the molecule has a thermal energy given by

and find the corresponding quantum number n of the quantum state that would correspond to this thermal energy. 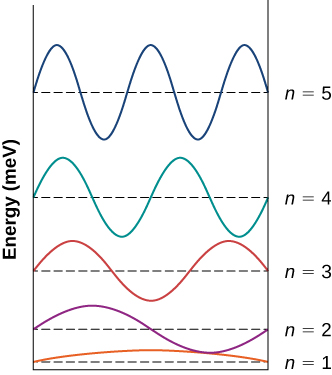 stationary state
state for which the probability density function,

, does not vary in time