The chief intellectual activity of any scientist is the development and revision of scientific models. A particle physicist seeks to develop models of particle interactions. This work builds directly on work done on gravity and electromagnetism in the seventeenth, eighteenth, and nineteenth centuries. The ultimate goal of physics is a unified “theory of everything” that describes all particle interactions in terms of a single elegant equation and a picture. The equation itself might be complex, but many scientists suspect the idea behind the equation will make us exclaim: “How could we have missed it? It was so obvious!”

Introduction to the Standard Model

The Standard Model can be expressed in terms of equations and diagrams. The equations are complex and are usually covered in a more advanced course in modern physics. However, the essence of the Standard Model can be captured using Feynman diagrams. A Feynman diagram, invented by American physicist Richard Feynman (1918–1988), is a space-time diagram that describes how particles move and interact. Different symbols are used for different particles. Particle interactions in one dimension are shown as a time-position graph (not a position-time graph). As an example, consider the scattering of an electron and electron-neutrino ((Figure)). The electron moves toward positive values of x (to the right) and collides with an electron neutrino moving to the left. The electron exchanges a Z boson (charge zero). The electron scatters to the left and the neutrino scatters to the right. This exchange is not instantaneous. The Z boson travels from one particle to the other over a short period of time. The interaction of the electron and neutrino is said to occur via the weak nuclear force. This force cannot be explained by classical electromagnetism because the charge of the neutrino is zero. The weak nuclear force is discussed again later in this section.

In this Feynman diagram, the exchange of a virtual

carries the weak nuclear force between an electron and a neutrino. 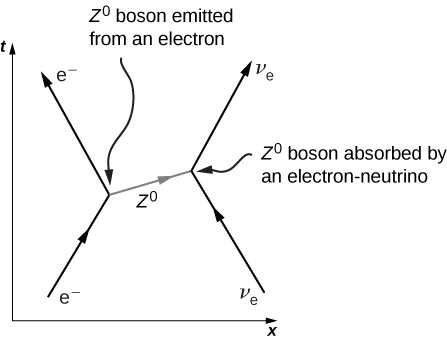 According to QED, the electromagnetic force is transmitted between charged particles through the exchange of photons. The theory is based on three basic processes: An electron travels from one place to the next, emits or absorbs a photon, and travels from one place to another again. When two electrons interact, one electron emits the photon and the other receives it ((Figure)). Photons transfer energy and momentum from one electron to the other. The net result in this case is a repulsive force. The photons exchanged are virtual. A virtual particle is a particle that exists for too short a time to be observable. Virtual photons may violate the law of conservation of energy. To see this, consider that if the photon transit time

is extremely small, then Heisenberg’s uncertainty principle states that the uncertainly in the photon’s energy,

may be very large.

Feynman diagram of two electrons interacting through the exchange of a photon. 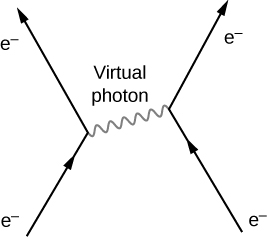 To estimate the range of the electromagnetic interaction, assume that the uncertainty on the energy is comparable to the energy of the photon itself, written

The Heisenberg uncertainly principle states that

Combining these equations, we have

The energy of a photon is given by

m) and like the other forces in the Standard Model, the weak force can be described in terms of particle exchange. (There is no simple function like the Coulomb force to describe these interactions.) The particle exchanged is one of three bosons:

. The Standard Model predicts the existence of these spin-1 particles and also predicts their specific masses. In combination with previous experiments, the mass of the charged W bosons was predicted to be

and that of the

was predicted to be

. A CERN experiment discovered particles in the 1980s with precisely these masses—an impressive victory for the model.

where n is the neutron, p is a proton,

is an electron, and

is a nearly massless electron neutrino. This process, called beta decay, is important in many physical processes. A Feynman diagram of beta decay is given in (Figure)(a). The neutron emits a

and becomes a proton, then the

produces an electron and an antineutrino. This process is similar to the scattering event

In this process, the proton emits a

and is converted into a neutron (b). The

then combines with the electron, forming a neutrino. Other electroweak interactions are considered in the exercises.

Feynman diagram of particles interacting through the exchange of a W boson: (a) beta decay; (b) conversion of a proton into a neutron. 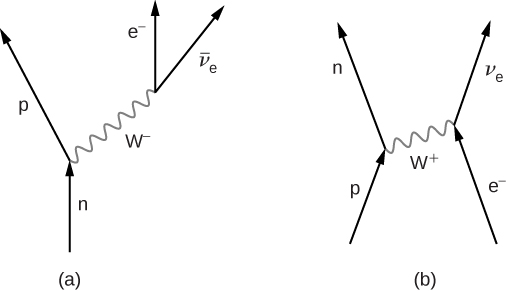 The range of the weak nuclear force can be estimated with an argument similar to the one before. Assuming the uncertainty on the energy is comparable to the energy of the exchange particle by

For one of the charged vector bosons with

Hence, the range of the force mediated by this boson is

Strong nuclear interactions describe interactions between quarks. Details of these interactions are described by QCD. According to this theory, quarks bind together by sending and receiving gluons. Just as quarks carry electric charge [either

Interestingly, the gluons themselves carry color charge. Eight known gluons exist: six that carry a color and anticolor, and two that are color neutral ((Figure)(a)). To illustrate the interaction between quarks through the exchange of charged gluons, consider the Feynman diagram in part (b). As time increases, a red down quark moves right and a green strange quark moves left. (These appear at the lower edge of the graph.) The up quark exchanges a red-antigreen gluon with the strange quark. (Anticolors are shown as secondary colors. For example, antired is represented by cyan because cyan mixes with red to form white light.) According to QCD, all interactions in this process—identified with the vertices—must be color neutral. Therefore, the down quark transforms from red to green, and the strange quark transforms from green to red.

(a) Eight types of gluons carry the strong nuclear force. The white gluons are mixtures of color-anticolor pairs. (b) An interaction between two quarks through the exchange of a gluon.

A Feynman diagram that describes a strong nuclear interaction between a proton and a neutron. 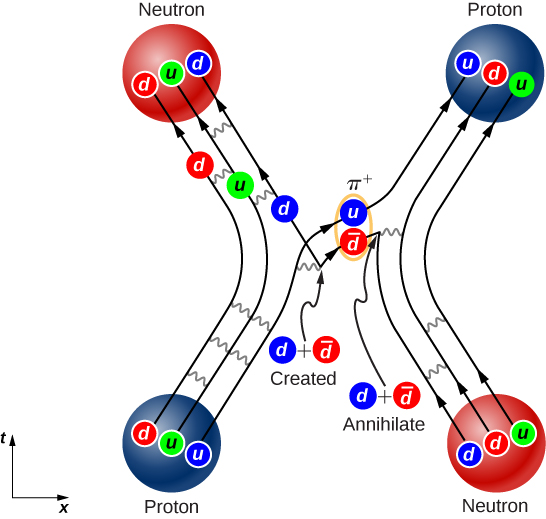 In practice, QCD predictions are difficult to produce. This difficulty arises from the inherent strength of the force and the inability to neglect terms in the equations. Thus, QCD calculations are often performed with the aid of supercomputers. The existence of gluons is supported by electron-nucleon scattering experiments. The estimated quark momenta implied by these scattering events are much smaller than we would expect without gluons because the gluons carry away some of the momentum of each collision.

Particle physicists now suspect that the strength of all particle interactions (the four forces) merge at high energies, and the details of particle interactions at these energies can be described in terms of a single force ((Figure)). A unified theory describes what these interactions are like and explains why this description breaks down at low-energy scales. A grand unified theory is a theory that attempts to describe strong and electroweak interaction in terms of just one force. A theory of everything (TOE) takes the unification concept one step further. A TOE combines all four fundamental forces (including gravity) into one theory. 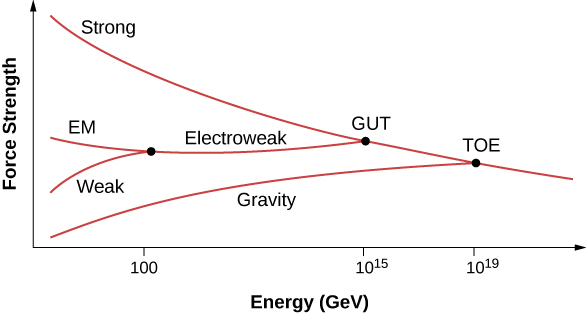 What is the Standard Model? Express your answer in terms of the four fundamental forces and exchange particles.

Draw a Feynman diagram to represents annihilation of an electron and positron into a photon.

What is the motivation behind grand unification theories?

To explain particle interactions that involve the strong nuclear, electromagnetic, and weak nuclear forces in a unified way.

If a theory is developed that unifies all four forces, will it still be correct to say that the orbit of the Moon is determined by the gravitational force? Explain why.

If the Higgs boson is discovered and found to have mass, will it be considered the ultimate carrier of the weak force? Explain your response.

No, however it will explain why the W and Z bosons are massive (since the Higgs “imparts” mass to these particles), and therefore why the weak force is short ranged.

One of the common decay modes of the

Using the Heisenberg uncertainly principle, determine the range of the weak force if this force is produced by the exchange of a Z boson.

Use the Heisenberg uncertainly principle to estimate the range of a weak nuclear decay involving a graviton.

The graviton is massless, so like the photon is associated with a force of infinite range.

(a) The following decay is mediated by the electroweak force:

Draw the Feynman diagram for the decay.

(b) The following scattering is mediated by the electroweak force:

Draw the Feynman diagram for the scattering.

Assuming conservation of momentum, what is the energy of each

ray produced in the decay of a neutral pion at rest, in the reaction

What is the wavelength of a 50-GeV electron, which is produced at SLAC? This provides an idea of the limit to the detail it can probe.

The primary decay mode for the negative pion is

(a) What is the energy release in MeV in this decay? (b) Using conservation of momentum, how much energy does each of the decay products receive, given the

is at rest when it decays? You may assume the muon antineutrino is massless and has momentum

. By conservation of energy,

Suppose you are designing a proton decay experiment and you can detect 50 percent of the proton decays in a tank of water. (a) How many kilograms of water would you need to see one decay per month, assuming a lifetime of

(b) How many cubic meters of water is this? (c) If the actual lifetime is

, how long would you have to wait on an average to see a single proton decay?