Skip to content
Most suicides are preceded by verbal or behavioural warning signs. This section looks at some of the signs that someone may be considering suicide.

These slides are available for use with this section of the presentation. For information about downloading presentation slides, see Introduction.

Signs That Someone Is Contemplating Suicide 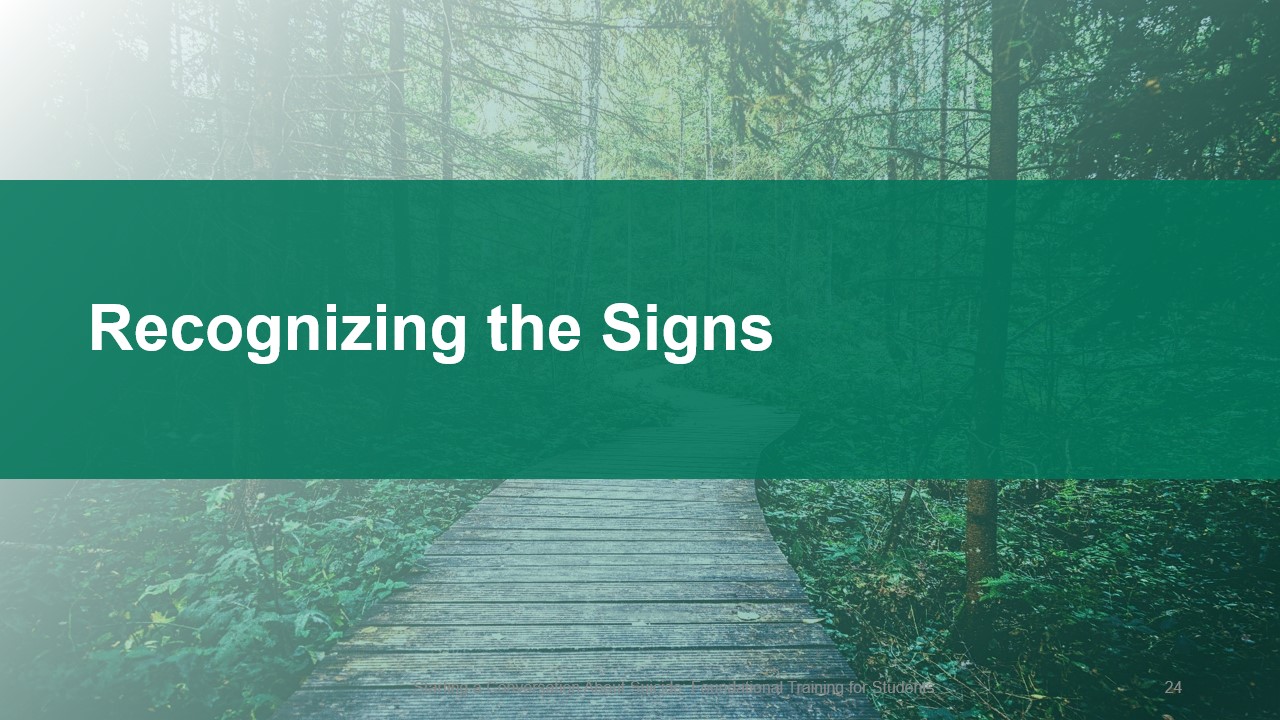 A suicidal person’s thoughts, feelings, physical effects, actions, and events may give us clues to the possibility of suicide.

We need to be observant and notice these things, which by themselves may not be definitive indicators but will give us valuable clues to probe further. Remember: 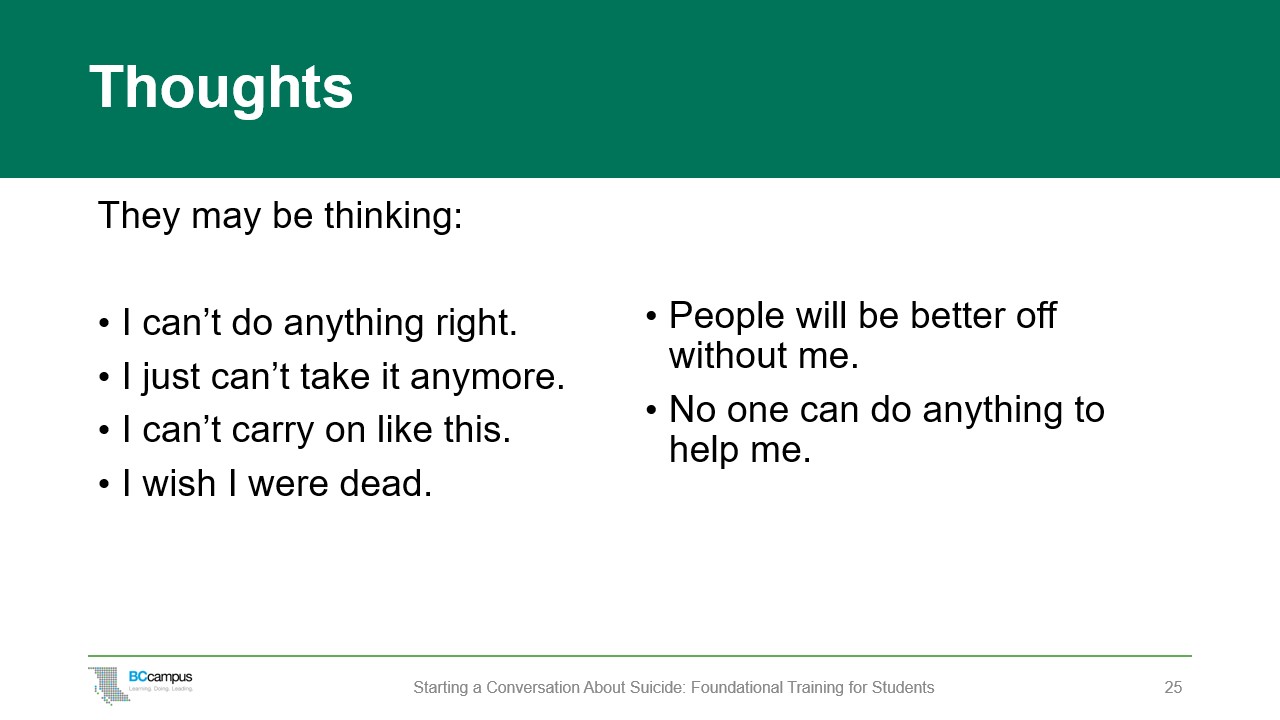 What are possible thoughts that people who are contemplating suicide might be having? They may be thinking: 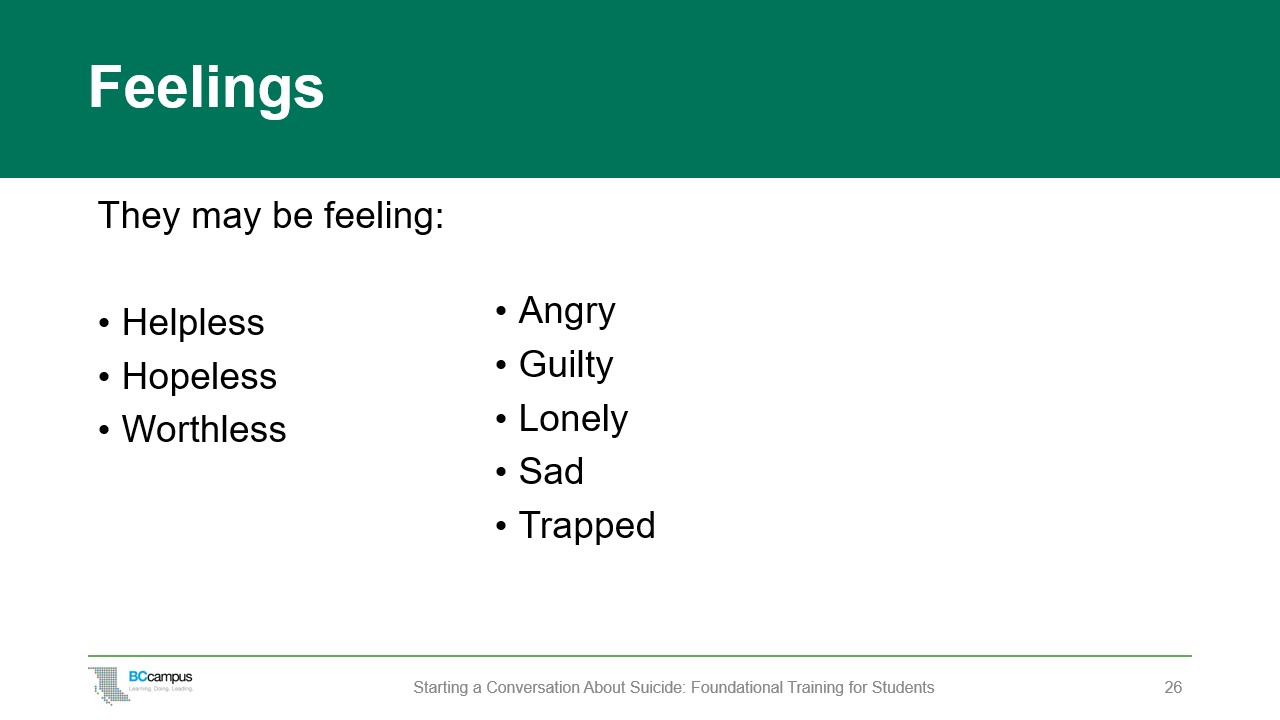 If you hear a student say they feel helpless, hopeless, or worthless, these are red flags that they may be thinking about suicide. They may also be feeling angry, guilty, lonely, sad, or trapped. People may feel ambivalent about dying. Suicidal thoughts often come when a person’s pain exceeds their resources. 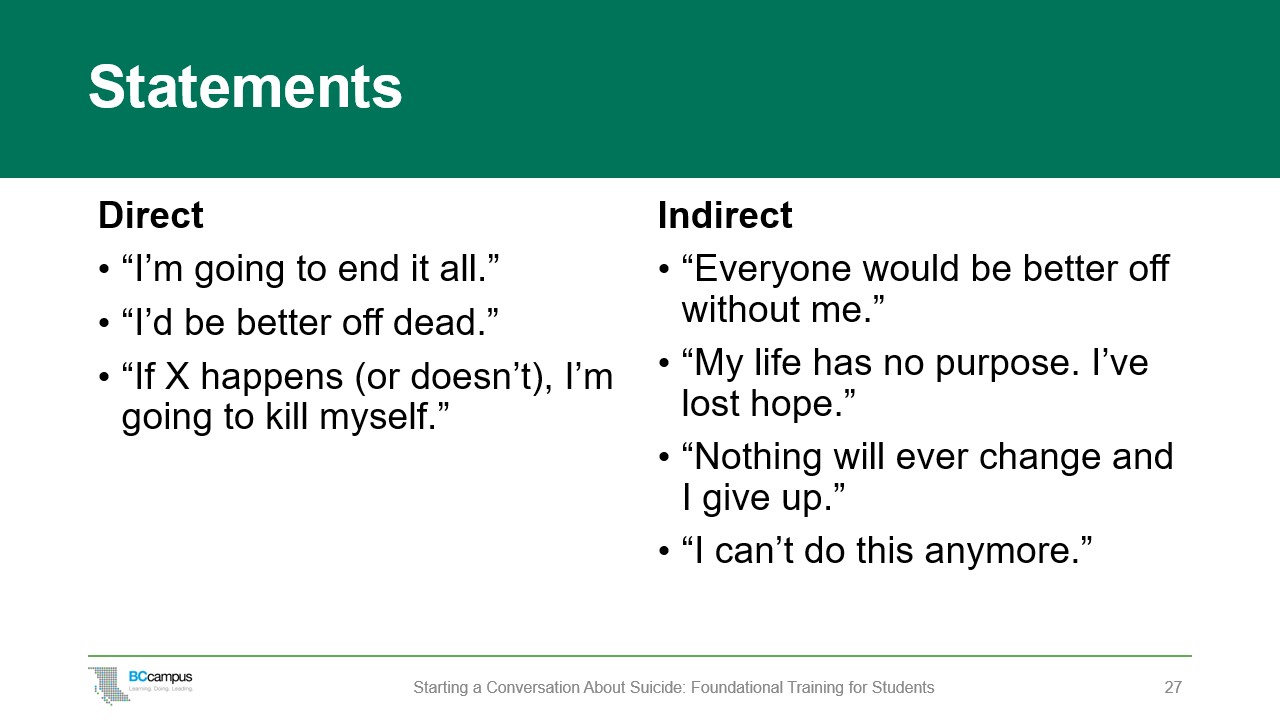 Sometimes a person will make statements about their intention. Direct statements could be:

Indirect statements could be: 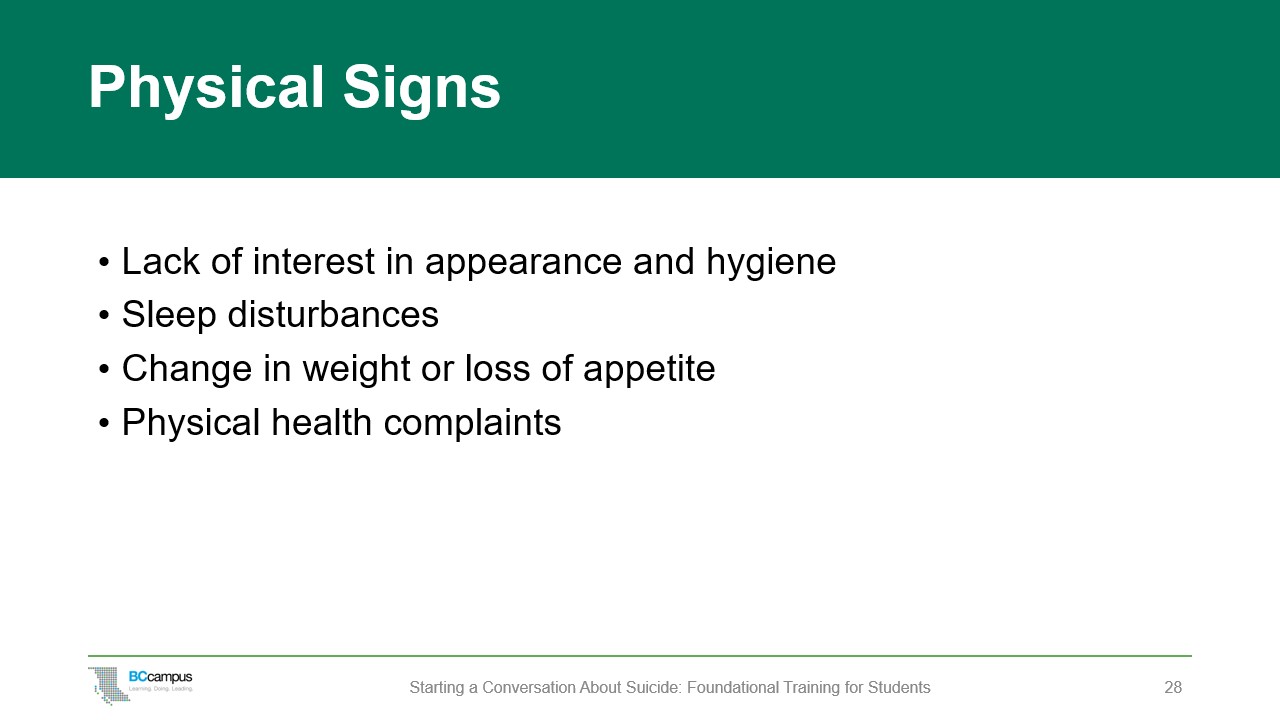 What physical signs might indicate someone is contemplating suicide? 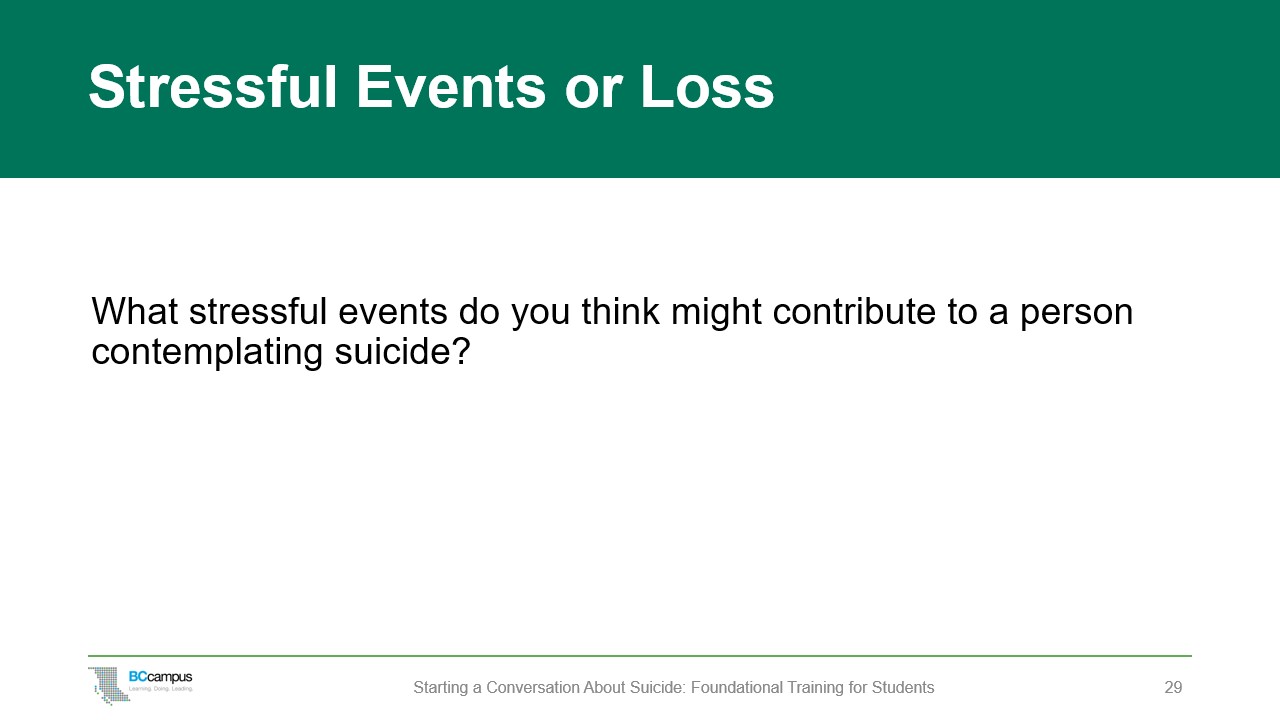 Ask the group: What stressful events would likely contribute to a person contemplating suicide?

Write down participants’ answers, which may include: 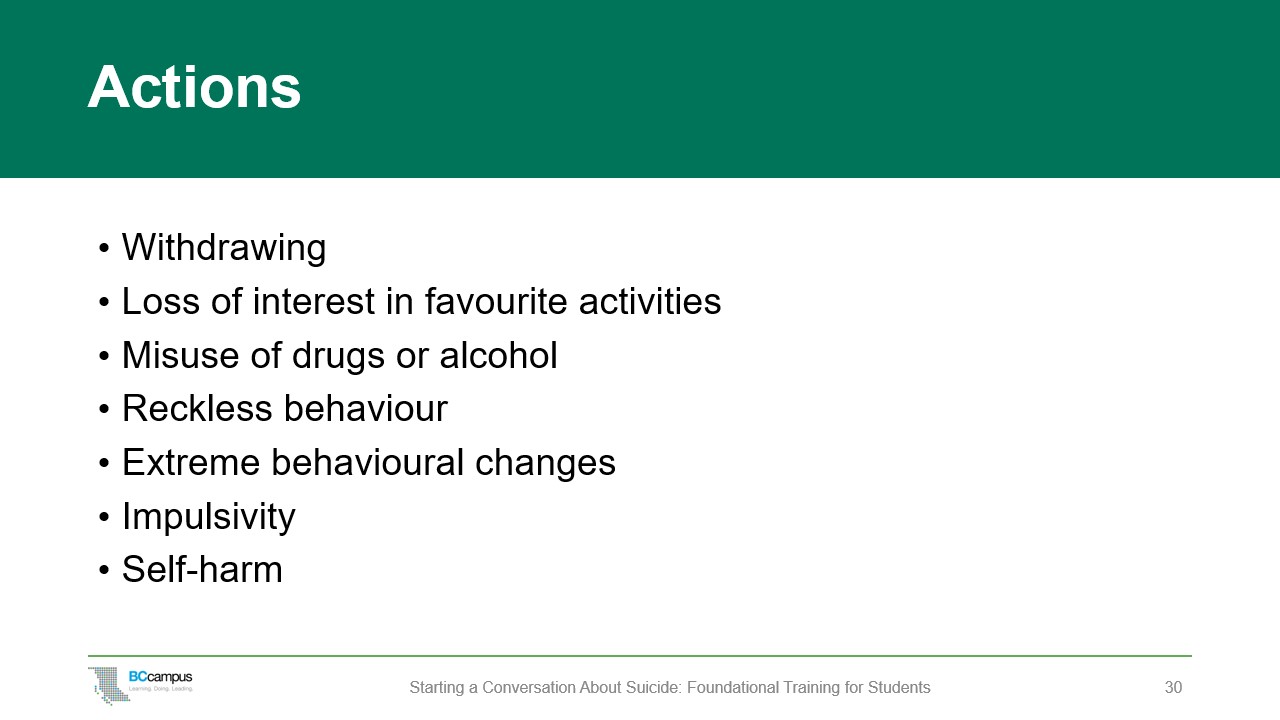 A person’s actions can be a sign that they are considering suicide. Any of the following actions could be a warning sign: 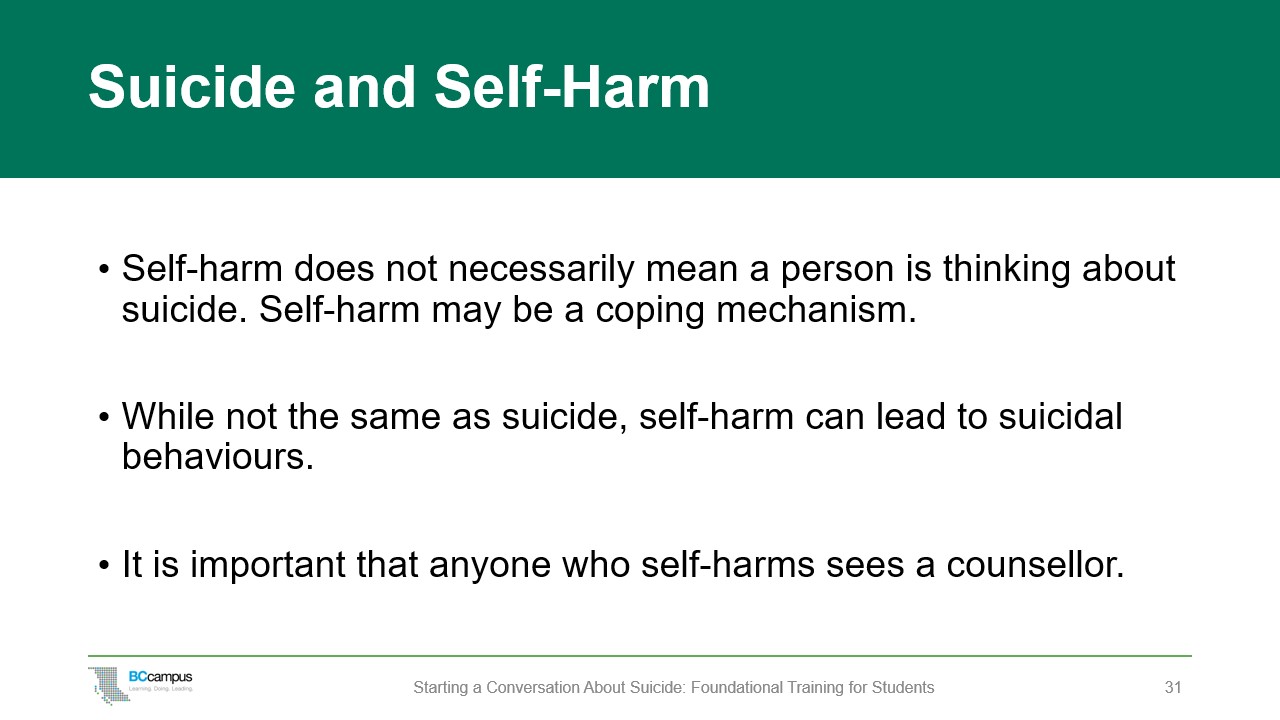 Self-harm is the intentional and deliberate hurting of oneself. It is very upsetting to notice that someone is self-harming. The relationship between self-harm and suicide is complex, and not all experts agree. Self-harm does not necessarily mean a person is thinking about suicide. It is often a coping method, a way to deal with feelings such as anxiety, anger, or pain. It can also be a way that people communicate their emotional pain and a way to reach out for help.

Although self-harm is not the same as suicide, self-harm can spiral into suicidal behaviours, and it is important that anyone who self-harms see a counsellor. It’s not your responsibility to assess the seriousness of the self-harm or whether it is connected with suicide risk. The most important step is to help connect anyone who is self-harming to a counsellor.

Note: If participants have questions specifically about self-harm, suggest that they talk to you after the session for resources to help them understand more about it. A very good resource on self-harm is the website Self-Injury Outreach and Support.

Suicide contagion, or copycat suicide, refers to the increase in suicide-related behaviour as a result of inappropriate exposure to or messaging about suicide. There is evidence that copycat suicides do occur under some circumstances. If someone is already vulnerable (e.g., is depressed, anxious, or isolated; has previously attempted suicide; or is showing other warning signs), one suicide can trigger another.

Suicide contagion is most pronounced when someone loses someone close to them. Youth appear to be especially vulnerable. Other conditions that can increase the risk of suicide contagion are high-profile, sensational portrayals of suicide in the media, or inadvertent glorification of a suicide victim. Providing safe and appropriate information about suicide helps to start positive dialogue and reduce the stigma associated with suicide. 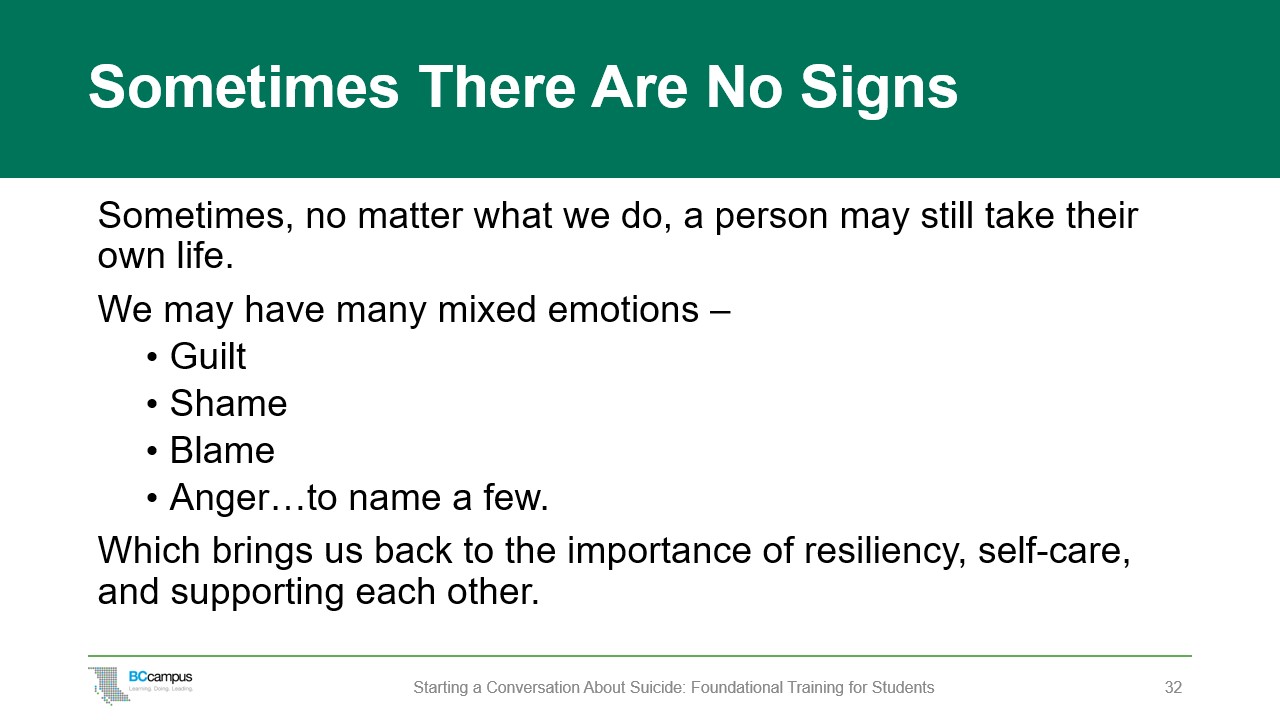 When There Are No Signs

Sometimes a person doesn’t give any signs that they are having suicidal thoughts before they end their life. This is a very difficult and painful thing to deal with. It brings us back to the importance of resiliency, self-care, and supporting each other.

However, there are things we can do. The next section looks at how we can respond to and support someone who may be thinking of suicide.